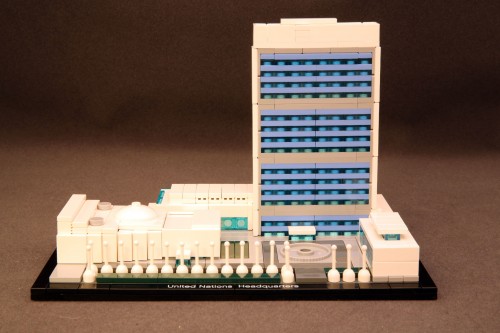 The model is based on the upcoming LEGO Architecture set 21018 United Nations Headquarters which goes on sale at LEGO Shop@Home on October 1 with a double VIP points promotion for that month. Or you can buy it right now from Amazon.com for $46.74

, a small 7% savings discount as I write this.

It’s a little difficult to review Architecture sets without having personally visited the building that it’s modeled after. The best one can do in that position is to look at pictures online. Thankfully, the instruction booklet can help. Like the instructions found in other Architecture sets, this was a thick booklet offering pictures and words on the history and significance of the building. I thumbed through it briefly, wanting to get straight to the building instructions. 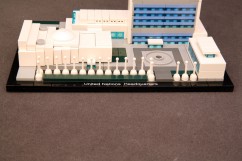 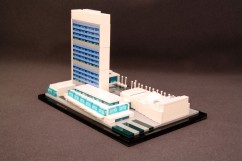 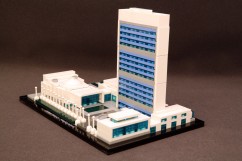 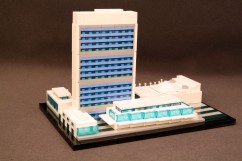 The actual tower building, the Secretariat Building, is rather plain being a tall rectangular block shape. But the headquarters is actually composed of several structures sprawled across 17 acres on the east side of Manhattan, so the actual model is a bit more substantial than most others and it gives a better sense of scale. Everything is faithfully recreated, right down to the flagpoles and the circular fountain. 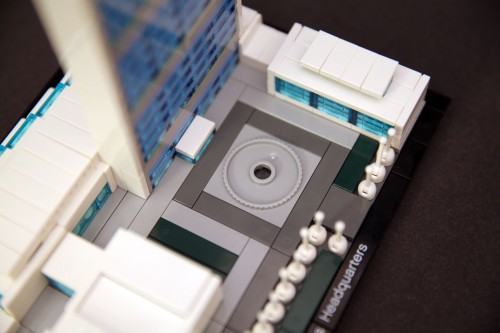 The models of the buildings are stylistically monochromatic in white, surrounded on a base of gray and dark green tiles. Oddly enough there are two 1×1 round tiles in light gray on top of the General Assembly Building. The building slopes on three sides: the roof and the two longest walls, which is faithfully recreated in the model. The same sloping effect can be found in the Conference and Visitors Center, which is adjacent to the General Assembly Building. The gentle sloping effect it achieves through the combined use of the traditional headlight bricks, 1×1 bricks with one stud on the side, and numerous plates was an eye-opener for me. You can see what I’m talking about in the picture below where the vertical 1×2 tiles are just above the flagpoles. I think a lot of building techniques I pick up through building official sets are learned passively, but this was one of the few times I stopped building, tore apart what I just built to really pay attention to the technique. This happened a second time in the Secretariat Building which I’ll get to later. 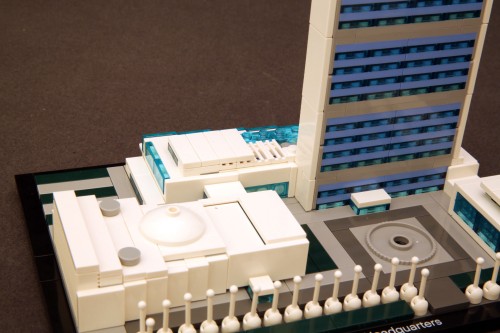 Since this is more of a model intended for adult enthusiasts than a play model geared for children, certain liberties in structural integrity were taken. Some 1×2 tiles are attached to single stud which would prove unstable in regular sets to pass quality control and testing, but are a necessary technique in the Architecture line. It’s not really a detriment to the set, more of a testimony of the designer’s attention to detail. Another example of this attention to detail would be the 1×2 grille tiles in the Conference Building with 1×3 tiles on top. No doubt this was done for the little detail of the grooves from the grille tile showing through the facade. For the life of me I can’t seem to find a picture online of what it is supposed to represent but I’ll trust the designer that it is significant enough to include. 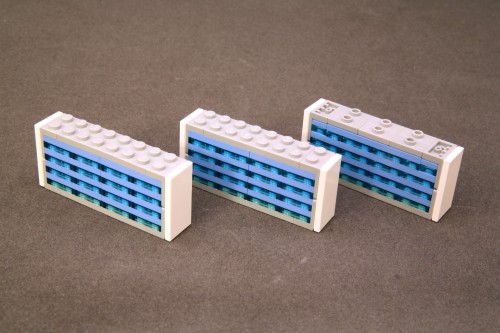 one of these things is not like the other…

The Secretariat Building, the tall tower, is an exercise in repetition. There are 155 1×2 trans-blue plates in the set, and the majority of them go here. There are three tiers to be built, two which are exactly the same, the third being just slightly different. And this is where the I had to stop to building to examine what I just built. The top set of brackets plates are the same as the lower ones, and they are attached upside down with the help of the 2×4 white tile connecting the top to the bottom brackets. This was necessary for the roof of the building which is offset by 1 stud thanks to the jumper plates. It wasn’t obvious at first when I was examining the pictures of the set on Amazon, but after building it, it’s a neat solution to the offset problem. This, coupled with the sloping technique I described earlier, serves as a great lesson on seeing how the proportions of LEGO elements fit with each other in unconventional ways. I’m not the most proficient builder, but I honestly felt like I learned something building this set not only once, but twice. 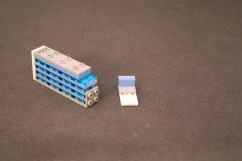 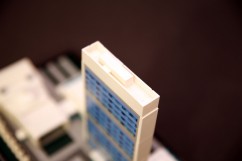 The price tag of $49.99 MSRP has the set fall about the middle of the road when compared to the other sets in the Architecture line. So while it’s not break-the-piggy-bank expensive, it’ll definitely make you consider your purchase before shelling out the bucks for it. There are some nice pieces in it, like the dark green tiles, 1×3 tiles, the awesome looking white lever + white lever base which you get 19 of, and the 155 trans-blue 1×2 plates, and so on.

There’s a certain segment of the AFOL community who will only see the value of the set based on the parts alone. And for that segment, I have absolutely no idea whether or not this set has any value in that regard. The price per piece ratio is certainly in its favor, about 8 cents a piece. And once the parts inventory lands on Bricklink, you can decide if there’s enough there to warrant a purchase. For the more casual AFOL who may also happen to be a fan of the Architecture line or international politics, it’s probably an easy pick up. For the rest of us, it’ll probably be like all the other Architecture sets that you gloss over and pass by on your way to the other themes. 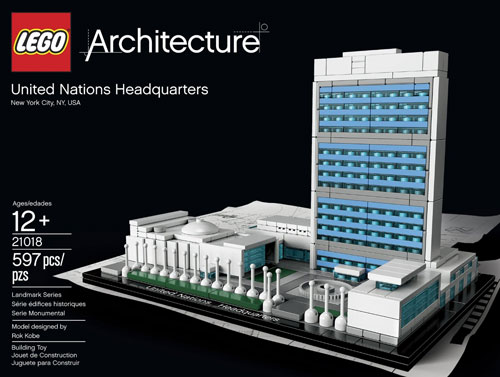 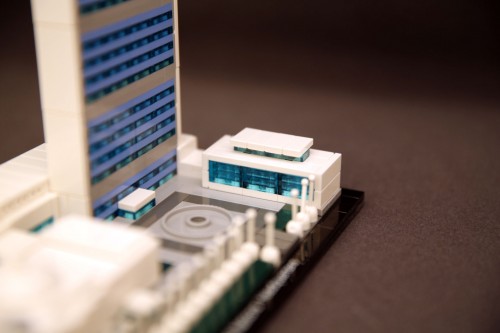 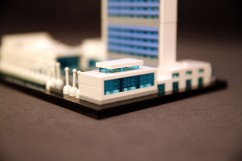 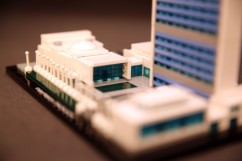 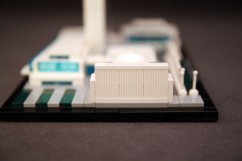 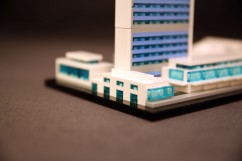 One of these days I’m going to shoot in RAW. My white balance is all over the place.