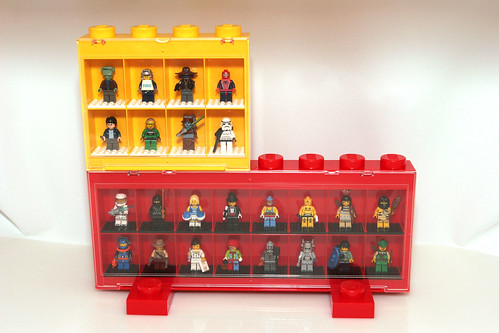 We first broke the news about LEGO Licensing producing a series of minifigure display cases back during our Toy Fair coverage. I never did follow up with the rep but regardless, when I ran across these at Toys’R’Us over the weekend, I immediately bought the two that I found. So here’s my quick and dirty review of the Large and Small Minifigure Display Cases.

There already exists a case that LEGO sells through their Brand Retail shops and Shop@Home. I present to you in all its glory, the LEGO Minifigure Collector’s Box:

Made from sturdy cardboard, this will hold 15 of your most precious minfigures in a briefcase style collector’s box. Yeah, I agree, so totally lame. First of all, cardboard? Really? And who is going to want to carry their minifigs around like that? If you’re a minifig collector, you’ll want to display them and leave them alone, not carry them with you to lunch. Plus, it only holds 15 figures. If you’re looking for a solution for the Collectible Minifigures, you’d have to either forget about displaying the 16th figure or cram two figures into one slot. Not a very good solution. The whole thing costs $15 bucks, and you’re basically paying for cardboard, 15 4×6 plates, a fancy red handle, and the inconvenience of not being able to display all 16 figures properly. Don’t believe the reviews on the Shop@Home page. They don’t know what they’re talking about except for doodlepippin. 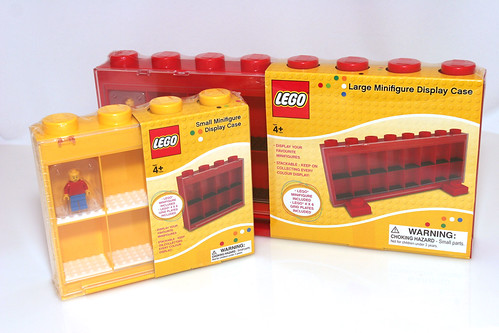 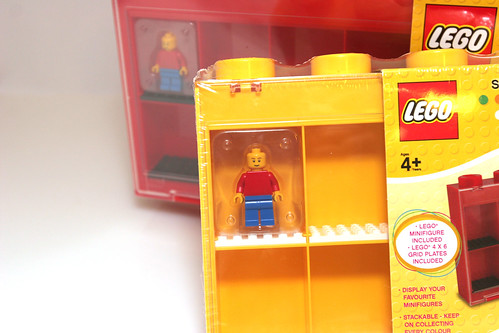 This is where LEGO Licensing comes in. Right from the start, LEGO Licensing wanted to produce a case that was able to hold all the figures from any series of the Collectible Minifigures. Their Minifigure Display Cases come in two sizes, Large will hold 16 figures in two rows of 8, or Small which will hold 8 figures in 2 rows of 4. Each case also comes with a generic minifigure that is nothing to write home about. I almost wish they didn’t include the minifig so the cost would be cheaper. 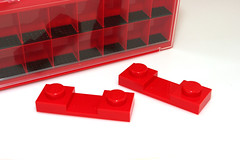 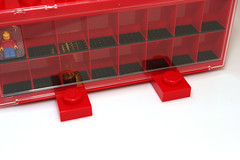 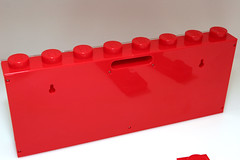 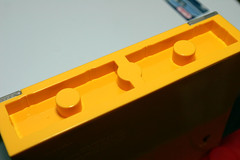 What I liked: They are stackable, wall mountable, and come in a variety of colors. Made from hard, sturdy, ABS plastic, they are outfitted with a clear front door panel to keep the dust out that you release by depressing a button at the top to release the lock. The Large sized case also come with a pair of feet for balance. Ideally, if you were to put these on a shelf or a table, you’d use the large ones on the bottom so you can use the feet for stability and stack them upwards. The fact that a Small is exactly half the size of the Large makes stacking them like bricks a no brainer. 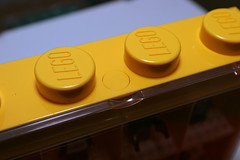 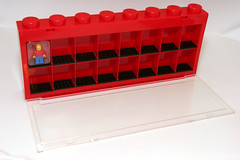 There are 16 compartments. ‘Nuff said. 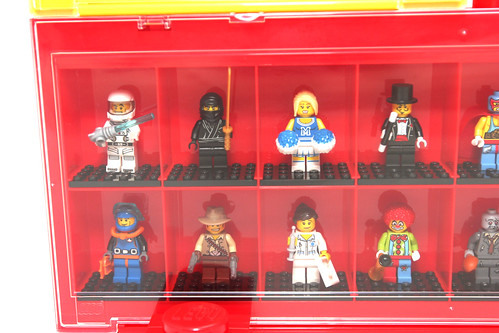 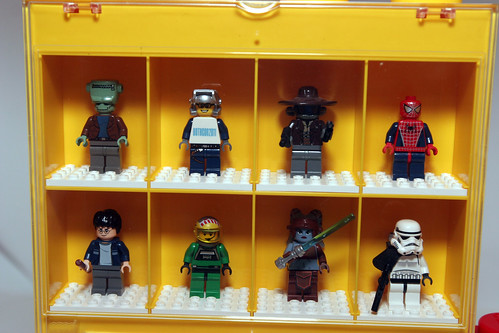 What I didn’t: Not very deep. A minor issue but I wish the cases were a little deeper and a little taller. Since the plates are 4×6 I set all my figures on the third row of studs from the front to give their accessories some room. This also gives the minifigure room in the back for their helmet, hair, or other accessories. Some of the minifigs have accessories, like the Series 1 Spaceman with his ray gun and ray, that extend forward quite a bit so some adjustments have to be made. I’m not thrilled at all with how the Spaceman ended up fitting in his compartment. I suppose I could have removed the 3L bar, but that isn’t the best solution either since you’ll end up with a loose part. In the case of a jedi with a lightsaber, my Arealight custom Aayla Secura fits perfectly. However, if she were to hold the lightsaber out directly in front of her in a vertical position, the top of the blade won’t fit under the ceiling of her compartment. After tinkering with her, the best position I found was across the body as seen in the pic above. In the case of the Sandtrooper from 8092 Luke’s Landspeeder set, I had to set him on the second row since his bulky backpack prevented him from standing up straight on the third row. Extending the depth probably would have dramatically increased the cost of each case, so despite the compartments feeling a little shallow, overall I’m happy with the compromise. The compartments will fit 99% of the minifigs made to date without any issue, so dealing with 1% isn’t that big of a deal. 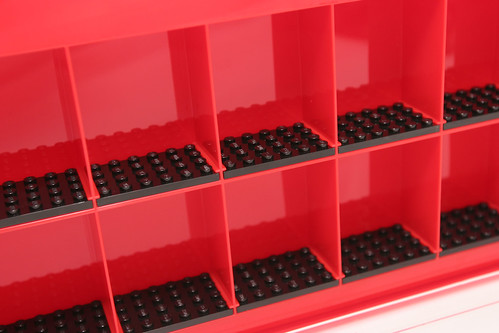 I’m nitpicking here but I wish the plates were the same color as the case; and I wish the minifig they included was a blank figure in the same color. So a blue case would come with blue plates and an all-blue blank minifig, etc.

Price. The Large case from Toys’R’Us cost $22.99, with what I presume was a $3 dollar markup. I’m hoping the actual MSRP is $19.99. The Small case was $14.99, which is atrociously expensive. In my mind, the Small case, since it’s exactly half the size of the Large case and holds exactly half the figures, should have been priced at $11.49 (or $9.99 if my MSRP theory is correct). I am hoping that the cases will become available at Amazon soon and Shop@Home soon, but I don’t expect the price of the Small case to go down that much or at all.

No bulk pricing. An AFOL can dream, can’t he?

Verdict: It’s a no brainer. These are durable cases with a myriad of display options. I highly doubt anything better will come along. LEGO Licensing will not be able get these to market fast enough. These are just now starting to show up at Toys’R’Us so with a little patience they’ll be available through other retail channels, but not soon enough.