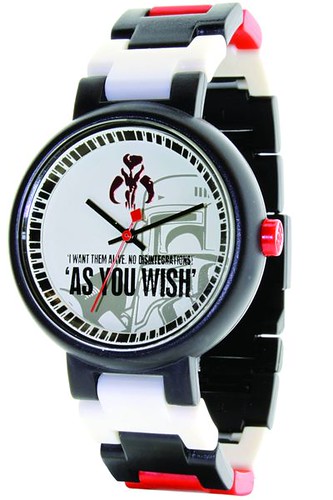 You know, as watches go, the LEGO ones are clearly geared towards kids what with the buildable strap and ho hum design. Recently, Things From Another World listed some “LEGO Adult Watches” but with no pictures until now. There’s the Boba Fett watch above, which isn’t all that bad to be honest with you. Definitely a step up from any of their previous offerings and might actually appeal to an adult. Might. ‘Cause let’s face it, if LEGO Star Wars watches aren’t the ultimate indicator of your geek status, nothing is. There’s also a Darth Vader watch. A Stormtrooper design is also mentioned, but no listing was found. Price for the watches is $27.99 on pre-order. 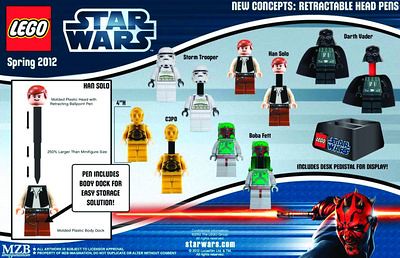 And in other niche market news, have you ever had a minifig in your pocket and wished it was a pen instead? Well wish no more! There is a series of LEGO Star Wars pseudo-minifigs where you can pull off the head and voila! You get a retractable pen! The pic is tiny, but it looks like there’s a Stormtrooper, C-3PO, Han Solo, Boba Fett, and Darth Vader. They all include a stand. I’m going to go out on a limb and say the legs are fixed and unmovaible, much like the minifigure USB drive. Price is $10.39 if you pre-order. That’s one pricey pen….

And if the release date on those products is any indication, the official street date for Star Wars merchandise is February 29th, 2012. I imagine LEGO Star Wars will be released at the same time.

Thanks to CloneEmperor for the tip.