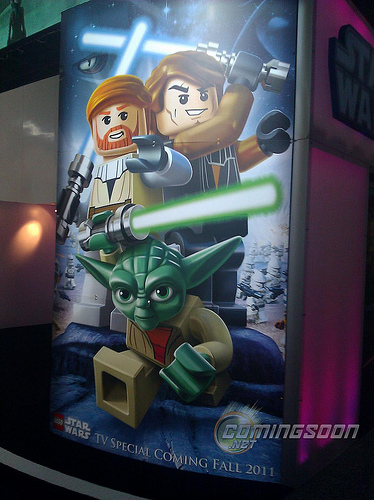 LEGO Star Wars animated special? If this article at ComingSoon.net is true, then you’ll be able to see a LEGO Star Wars special hit the small screen this September, in addition to whatever the new animated series will be.

An exciting surprise at the Licensing International Expo 2011, LEGO Star Wars is set to receive a small-screen special this fall. ComingSoon.net spotted the below art for the television event and, while details were few, was told that the special is likely for late September.

Based on the popular video game series, the LEGO TV special is being created in addition to a second, previously announced Star Wars cartoon series. That new series has been given the following official update:

Today, George Lucas is hard at work on a second animated series that will complement ‘The Clone Wars’, taking ‘Star Wars’ in a completely new and fun direction

With the franchise celebrating its 35th anniversary next year, LEGO Star Wars should be a welcome addition to the ongoing animated series, the upcoming 3D re-release of The Phantom Menace and the first-ever release of both trilogies on Blu-ray this fall.