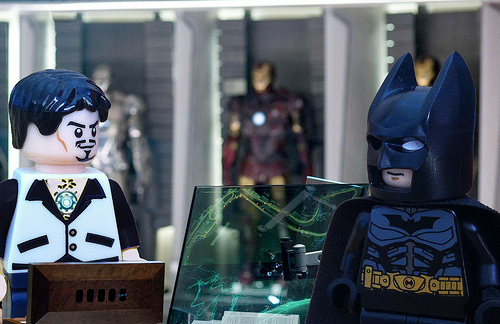 AT Stark Tower in New York, Iron Man is working with the Blue Beetle, Ant Man, Cyborg and Forge to finish vital upgrades to his armor in preparation for a second expedition to the deadly object heading for Earth. Based on the previous attempt’s failure, Tony Stark and Ted Kord believe technology to be the planets only hope.

Tony sits at his workstation making adjustment to his helmets HUD display. He looks around to see the rest of his team working on different parts of his armor as he says, “If they’d let us in on the plan sooner this would already be taken care of.”

“Based on the information they had, J’onn felt the team had an excellent chance for success, Tony. No one could have anticipated the results,” Hank Pym says sympathetically.

“In any case, your armor should be ready to go as soon as we finish the tweaks to the shields and power system,” Cyborg adds, without looking up from his work on the suits jet boots.

“A quick boom tube in the morning and I should have our problem dealt with and be home in time for dinner, just in time for my date,” Tony says as he leans back in his chair, putting his hands behind his head.

“You may want to have Pepper cancel your reservation, Tony. You’re going to need a new suit,” says a voice from the shadows in the doorway.

Tony shoots upright in his chair as the rest of the heroes turn to face the doorway, startled. Ted Kord smiles as he looks up to see Batman step out of the shadows and approach Tony’s workbench. He flips his welding visor down and continues working on Tony’s repulsor gloves. “Bruce, you haven’t been returning my calls.”

“If you’re here to join the genius, billionaire, playboy, philanthropist club Bruce, we’re not accepting any new members right now. Besides, we’re just completing our upgrades and the new suit is almost ready to go, so you can get back to babysitting wonder boy and leave the science to the day walkers,” Tony quips as he pops on his helmet to test out the HUD.

Tony sits down and flips up his face mask, looking at Batman curiously. “How can you be so sure?”

“I had Clark take a small sensor array with him when they approached the object. It didn’t just drain their powers, it absorbed them. And it’s growing.” As Batman finishes he reaches behind him and pulls out what iss left of the array and drops it on Tony’s bench.

Tony picks up the device and looks at its damaged and burned exterior. “It’s seen better days, but it definitely looks familiar.”

“It should, I based it on your tech to hedge our bets. I made a few upgrades too, if you’re interested. Point is, you go now and that thing will fry your suit and the radiation it’s giving off will kill you once your shields are down,” Batman says as he leans forward, putting his hands on the workbench.

“What would you suggest we do, Bruce?” Forge asks as he comes to stand next to Tony.

“We need to take a page from our enemiesâ€¦” he answers as he turns and walks over to the window, looking down at the city stretched out below them. “They’ve had a spy in our midst since the object was first detected. They pooled their collective intel and then went their separate ways. At this moment they’re building their own battle suits that are bigger, stronger and faster than anything we’ve got. They’ll destroy each other for a chance to posses whatever this thing is and if the winner’s battle suit has enough power to keep its shields up, they may have a shot.”

“What do you mean, posses it?” Hank asks as the concept began to hit him.

“When the object reaches our solar system its will begin to drain enough of our powers and abilities that its energy field will grow to encompass half the planet. There’s no telling what will happen at that point, if it doesn’t destroy Earth its radiation will kill everything on it. If any of our enemies succeeds in finding a way to possess it and harness those powersâ€¦” he stops and looks up at the full moon above them.

“I get it, pretty much a lose/lose situation,” Tony says as they walk over to join him at the window. “I’m guessing you think we should build our own upgraded mech to stop them and deal with the object?” he finishes as he glances over at Batman.

“No. We need to get it out to everyone to build as many as we can in the time we have. We get everyone together on this, no idea gets left out and we’ll test them against each other and our enemies. The last mech standing is the last and only chance at success. We need to make sure it’s one of ours,” he says as he turns to the group.

“Are you sure we’ll be able to stop it?” Forge asks as he glances around at the group.

“Will we even have enough time?” Blue Beetle adds, concerned.

“The only thing that’s certain right nowâ€¦” Batman says as he heads towards the door quickly, “Is we need to start building.”