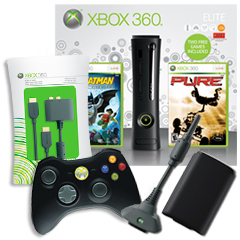 For the holidays, Microsoft is offering a new Xbox360 Elite bundle with two video games, Pure and LEGO Batman for $299 (via Amazon). Not sure about Pure, but LEGO Batman was a great game and a terrible game at the same time. Great since it follows the tried-and-true gameplay of LEGO Star Wars’ hack’n’slash, and terrible because there are no more LEGO Batman sets to be had. And believe me, once you’re done playing the game, you’re gonna want some sets to play with. Anyways, if you’re on the fence about getting the bundle for you or your family, Best Buy is sweetening the deal by offering a $50 discount on the bundle plus an extra Xbox 360 wireless controller, an HDMI A/V cable, and a Xbox 360 Play & Charge Kit, all for $369.99. You can purchase online for delivery or pick up at a local store. Not sure when this deal is supposed to end.