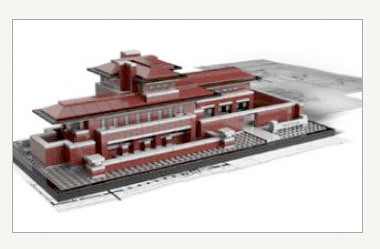 Adam Reed Tucker’s next entry in the LEGO Architecture series is Frank Lloyd Wright’s Robie House. Weighing in at 2,276 pieces, this is the largest LEGO Architecture set to date. And the most expensive at $199.99. I, for one, am excited at seeing more pictures because I always felt that the small scale nature of previous Architecture sets never did the source material proper justice. With a piece count this high, though, LEGO seems to be making amends for that, and also to help us forget their previous laughable release, the Burj Khalifa.

Do you live in the Chicago area? You can be one of the first to lay your hands on this set at the official launch party held at the Robie House (5757 S. Woodlawn Ave Chicago, IL 60637) on Saturday August 27th from 10am to 4pm. Adam Reed Tucker will be on hand to talk about the set and possibly sign his autograph. Members can purchase the set for $179.99, saving 10% off of MSRP.

Thanks to Gingerbeard Man for the tip.