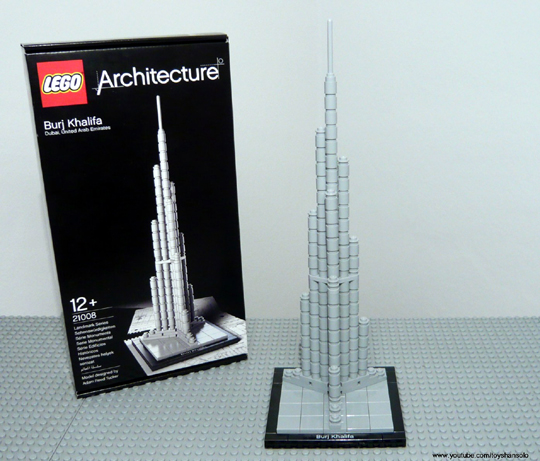 LEGO today released a press release detailing the latest addition to their Architecture line, Dubai’s Burj Khalifa. The set, number 21008, is scheduled to go on sale on June 1. No word on price yet, we’ll update this post as soon as we get more info.

BILLUND, Denmark â€“ The LEGO Group has chosen Burj Khalifa, the worldâ€™s tallest building, as the latest eye-catching representative of its LEGOÂ®

Architecture series, which celebrates the past, present and future of the worldsâ€™ architecture.

Burj Khalifa, inaugurated on January 4, 2010, towers 828 meters (2,716.5 feet) above Downtown Dubai, Emaar Propertiesâ€™ flagship development, billed as â€˜The Centre of Now,â€™ in the United Arab Emirates. It is the first model in LEGO Architectureâ€™s Landmark series to represent a building outside the United States.

Designed by Chicago architects Skidmore, Owings & Merrill, and developed by Dubai-based Emaar Properties PJSC, Burj Khalifa has been reproduced in LEGO bricks by Adam Reed Tucker, who has been responsible for the design of all the LEGO Architecture sets.

The aim of the LEGO Architecture series is to highlight and celebrate the worlds of architecture, engineering and construction through the representation of iconic and influential buildings, architects and movements.

â€œAs an architectural artist my desire is to capture the essence of a particular architectural landmark in its pure sculptural form,â€ says Adam Reed Tucker. â€œI donâ€™t view my models as literal replicas, but rather my own artistic interpretations through the use of LEGO bricks as a medium.â€

The LEGO Burj Khalifa is available for purchase from June 1 in LEGO brand retail stores, LEGOLAND Stores and online at https://shop.lego.com/ and online retailers, as well as at the At the Top, Burj Khalifa retail boutique located in The Dubai Mall.

Kind of a snooze fest if you ask me. I can probably build it with my own parts just looking at the pic.