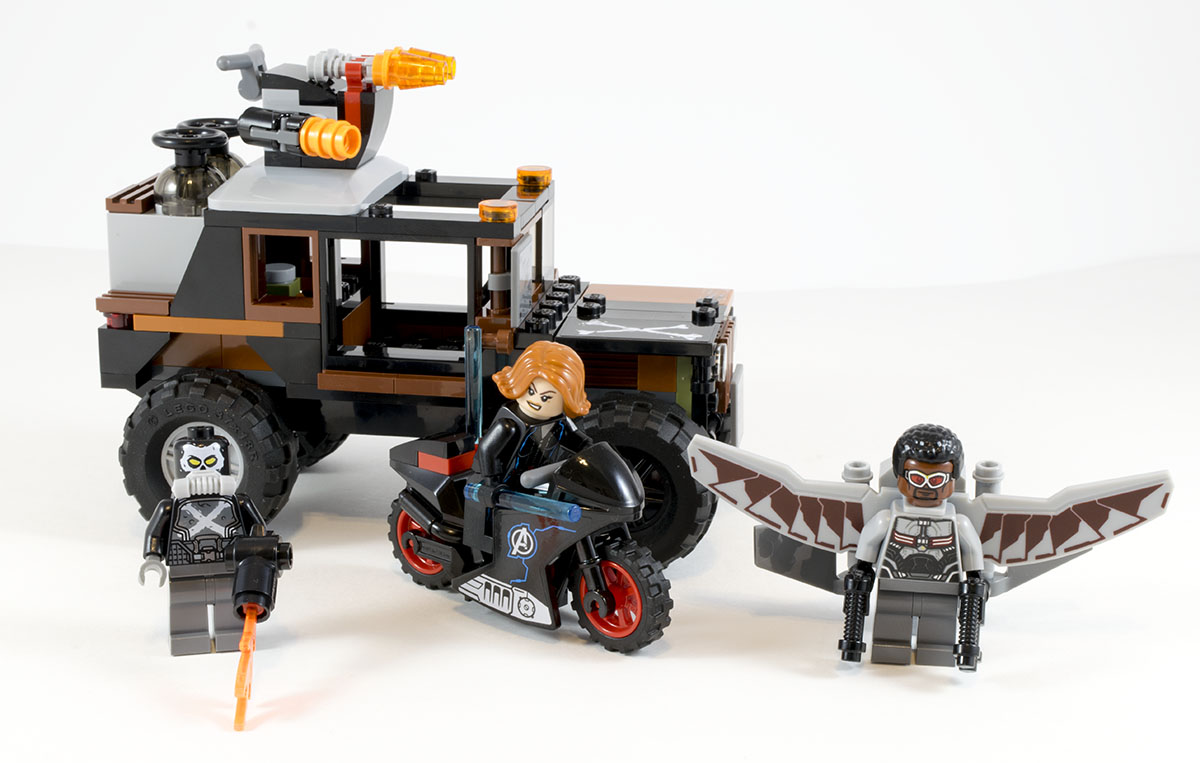 Like most people, my first thought when i saw this set was “wait, Black Widow in a set under $80, what is this, opposite day?” Then it was followed by excitement on seeing an MCU version of Falcon show up, since I’ve really wanted that version of his character vs. the comic version we got in the MODOK set. After that… I saw the truck, and my eyes wanted to throw-up a little, so I really didn’t know what to make of the set.

I knew I’d have to review 76050 Crossbones Hazard Heist just because I’d already ripped on the Airport Battle for including “yet another jet” in the lineup, and this one follows the “yet another truck” pattern. Super Heroes sets can be described as Trucks and Jets, all the way down, because I think those two things make up 90% of the sets at this point. I can’t wait to see how they get a truck out of the Guardians of the Galaxy 2 stuff.

Joking aside, getting Crossbones (new), Black Widow (typically hard to find), and Falcon (new for the most part) in a $20 set means this has a whole lot going for it out of the gate. It only comes in at 179 parts, which isn’t terrible at this price point, but there are a lot of little bits that inflate that number… the set feels smaller than that when you actually build it. Still, we get two characters that have typically gotten a short stick in sets, so that’s very nice to see. Compared to bigger sets, it’s easier to forgive a misstep or two in a $20 than in some $250 monstrosity, so hopefully this truck can measure up.

I’m writing this set before I see the movie, so there shouldn’t be anything in the way of spoilers. Unless you think that stuff existing is a spoiler, like Giant-man. Then I can’t help you. 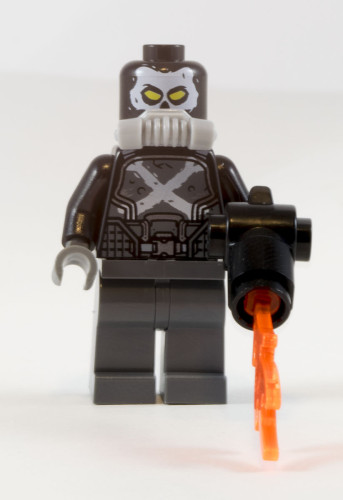 The only thing I realized while I was looking up Crossbones, which I didn’t realize at the time, is that apparently he’s the spec ops guy that Cap and Falcon tangled with in Winter Soldier. I had assumed he died when the building kind of exploded around him, but these are comic movies. As a figure, this one feels more miss than hit. The character in the movie wears a solid metal mask, since there are still ramifications for being exploded, and this is more like a skull print on a ski mask. 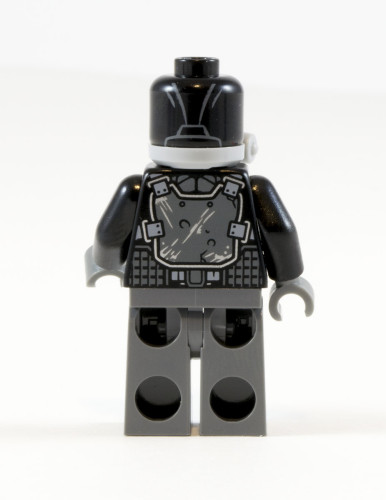 I’m curious to see how they work him into the plot of the movie, since we’ve seen so little of him in most of the previews. I’m still assuming most of the “conflict” between them will just be more like Age of Ultron, where there is a beef but it’s put aside when the bigger bad shows up. That or this guy will finish the job he started in the last Cap movie… who knows. I mean, who knows other than all the people who have already seen it. And the people who made the movie. And the writers. Or some collection thereof. 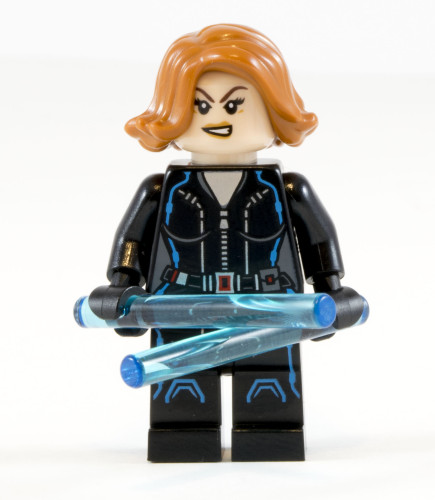 While it’s great to get Agent Romanoff (I’m honestly not sure if she’s ever been called “Black Widow” in any of the movies… I seem to recall Cap calling her widow before, but most of the time she’s called by her name; I’m sure someone will correct me in the comments), it’s a shame that it’s the same as we got in the Helicarrier and the Quinjet. The hair is wrong, and her outfit seems different in the movie… most of the other characters got changes, why wasn’t she worthy of that too? 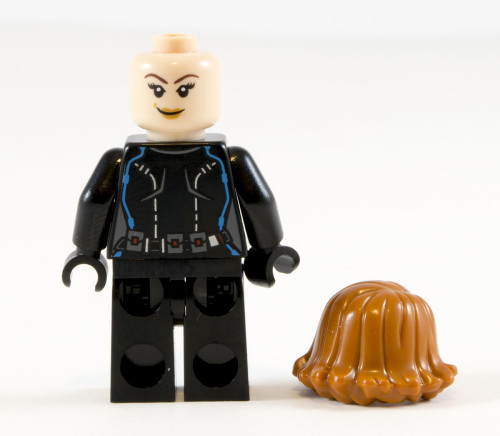 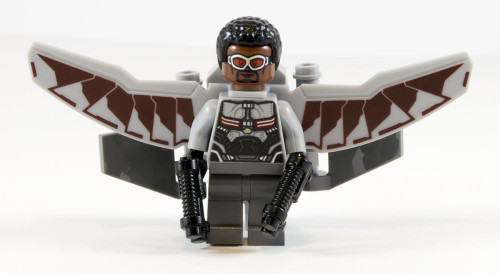 Of course, the biggest news in the set is that we’ve finally gotten a Shaft minifigure… wait, no, that’s Falcon.Â I guess LEGO is going to get a lot of mileage out of that Finn hairpiece while at the same time hinting at a trend where they don’t realize that people of color can have different types of hair. I’m sure that’s not what’s happening here, but the hair doesn’t fit the character, who keeps a somewhat military cut (though a bit longer than typical) that’s very short. This poofs out and makes him look like a BAMF more than a soldier.

The detachable part is “Redwing,” his removable drone that can fly around and smash stuff. I kind of wish it was the actual Redwing and that this version could talk to birds (since they established that Pym had the technology to talk to Ants, it seems like it could exist). The big downer for me is that he’s got an alt-face that also includes goggles. Ideally, I would have rather seen hair printed that looks better, or if they were going the alt-face route, a non-goggled version so we could have the character. I’m not certain there’s an alternate for the secret identity that has a goatee, so anything else out there is a compromise.

This is our third version of Falcon, though only two have been in sets. The third was an SDCC exclusive, available only to people that either went to the show or have more money than common sense. The hair from the other two certainly fits the comic version, but I think more traditional black hair would have done better for the movie version. Curious where the movie is going to take all of them… who knows, they could just kill off everyone and call it a day.

There is a new sticker for Black Widow’s bike, and the wheels are red now. Otherwise, it’s still just the crotch rocket bike. I don’t mind the model, and at least this set per her on the bike instead of including Cap or Tony Stark for it. LEGO has a bit more sense than some other manufacturers (like the company that released an entire “Armor” series for Superman… cause Superman is known for his gadgets and armor). 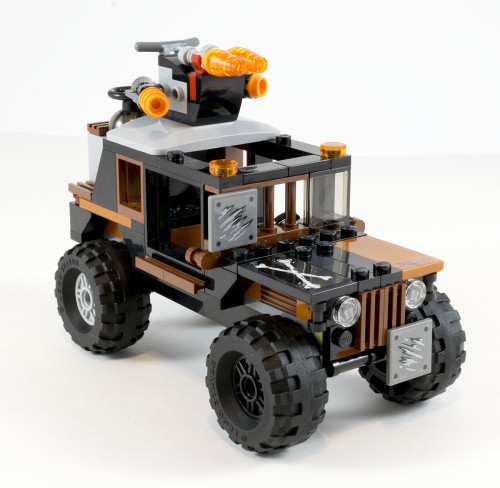 The bulk of the set is tied up in Crossbones’ truck, which might just be the ugliest truck that we’ve ever gotten. I’m far more trucked out than I am jetted out, and there’s nothing about the look of this truck that makes you want to buy it. 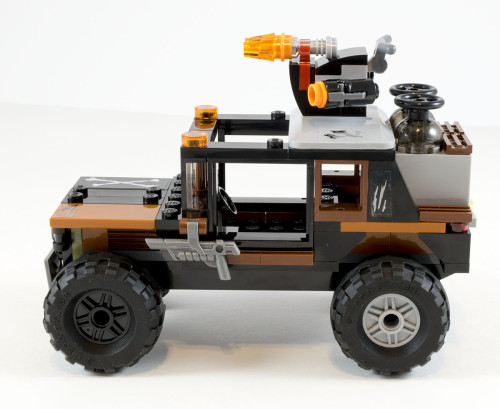 I get what they’re going for in this build, I really do. This is that old beater truck you see if you ever visit a scrapyard or ever have the chance to visit the “behind the scenes” of a zoo or big farm. It’s the kind of truck where the seats fell victim of Boba Fett’s “disinitigration first” policy and has more duct tape than body panels and the radio only plays if you get someone to sit in the back seat and put their hand six inches to the right of the dome light. 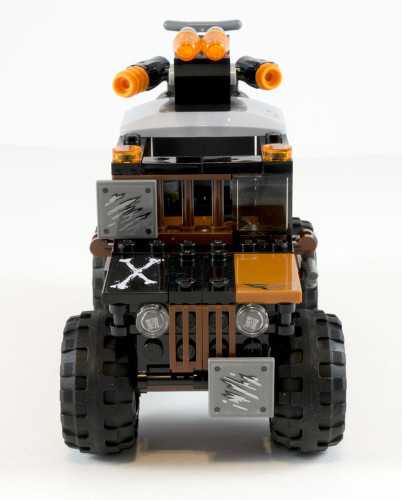 The problem is that the execution comes off more as lazy than weathered. LEGO has done weathered before in their stuff, but it rarely looks like anything other than a pile of bricks and stickers. Part of the problem here is the stickers, since you have these nice shiny bricks and then stickers over them. Worse, there are some things that just feel weird while you’re building a truck with windows and putting plates over non-tactical areas on the truck (just saying, there are some nice open gaps to take out that driver and nothing protecting the engine, Mr. Sniper). 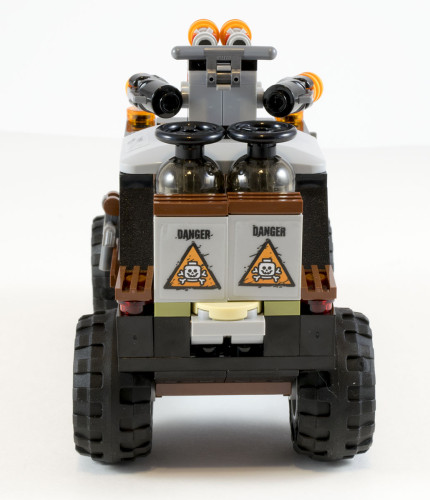 There certainly are some interesting things, and it’s always kind of fun to use non-typical parts in a build. This thing uses windows and prison bars. There’s a “playset” feature on the back where you can knock out a couple of these storage things. At least Crossbones seems to have a truck set up for stealing his boxes, so he’s now two steps ahead of Deathstroke and his jet ski chain. 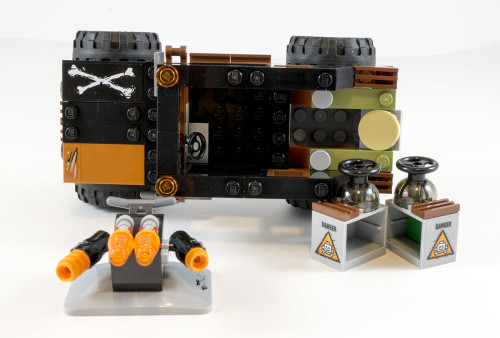 The ding I’d put on those boxes is the lack of doors. I get it, since they want them to close together, but it removes some utility in the parts for this build. There are some nice parts here in the tiles, the tile/plate parts, and those trans-smoke R2 domes. You get some nice tires and olive green… but none of that is really enough to improve that it’s just another truck, and an ugly one at that.

I’m sort of at a loss on how to rank this guy. Compared to all Super Hero sets, it’s probably a two at best. You get two nice figures, and one new figure that sadly misses the mark a lot. Falcon is way overdue, but Black Widow doesn’t get the update treatment most other characters do so she’s a duplicate from other, better sets. It’s also a great distribution of characters, and thankfully doesn’t have Cap or Iron Man taking up a spot in the set (Thor/Hawkeye in the other truck set at $20 had the same thing). The $20 set, this is competing with a few other sets that are all similarly lackluster (I haven’t reviewed the DC Harley set yet… haven’t even purchased it); seems like $30 is the real bang for the buck sets this cycle. I guess averaging all that out, I’ll call this a three out of five. It’s not great, but not a waste either. Plus, a cheap way to get Widow and Falcon.

Verdict: 3 out of 5. You can buy 76050 Crossbones Hazard Heist right now at Amazon.com. 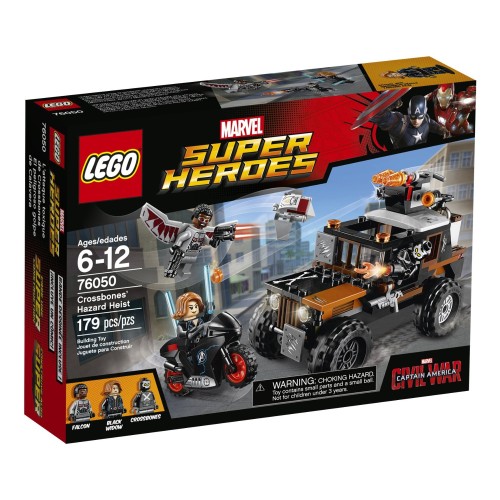