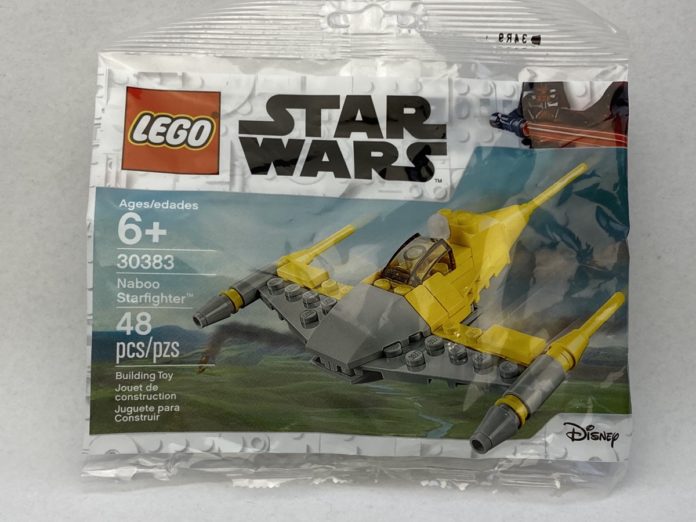 You know, when I pulled today’s polybag, 30383 Naboo Starfighter, out of the polybag bin, I realized how long it’s been since we’ve gotten a System-scale one. This polybag came out in 2019. A microfighter set, 75233 Naboo Starfighter Microfighter, came out that same year. But before that it was back in 2015, 75092 Naboo Starfighter. That’s six years ago and I feel like we’re due up for a new one. I don’t count the upcoming set, 75325 The Mandalorian’s N-1 Starfighter, for obvious reasons but I wouldn’t be surprised if we get one within the next year or two. But hey, I’ve been waiting for remakes for a lot of things and we still haven’t gotten any of those yet either so I’ll probably just keep waiting and waiting. 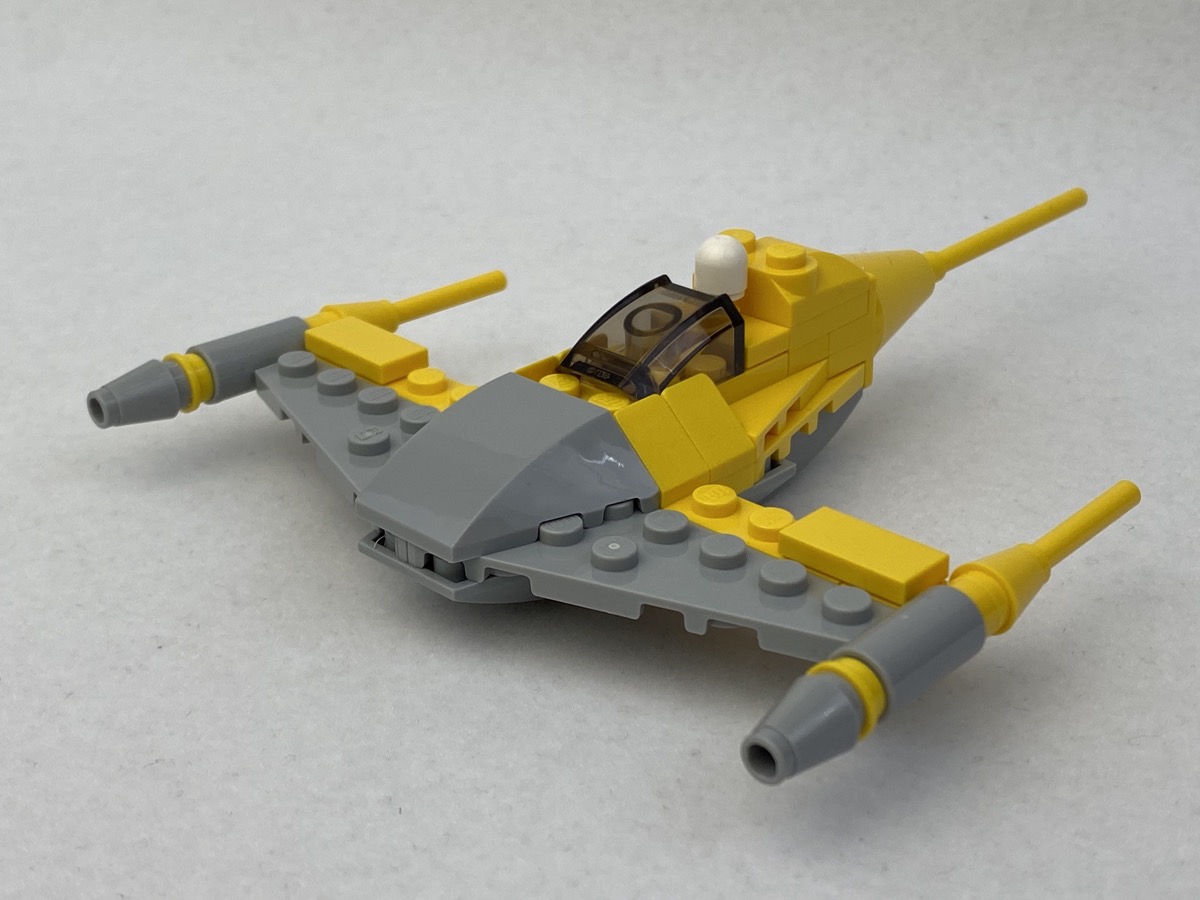 Anyways, this polybag may have to fill the void for now. And it’s not terrible. I’d say 90% of this is spot on and a great little mini remake. It hits just about all the right notes from wingtip to wingtip, from nose to tail. 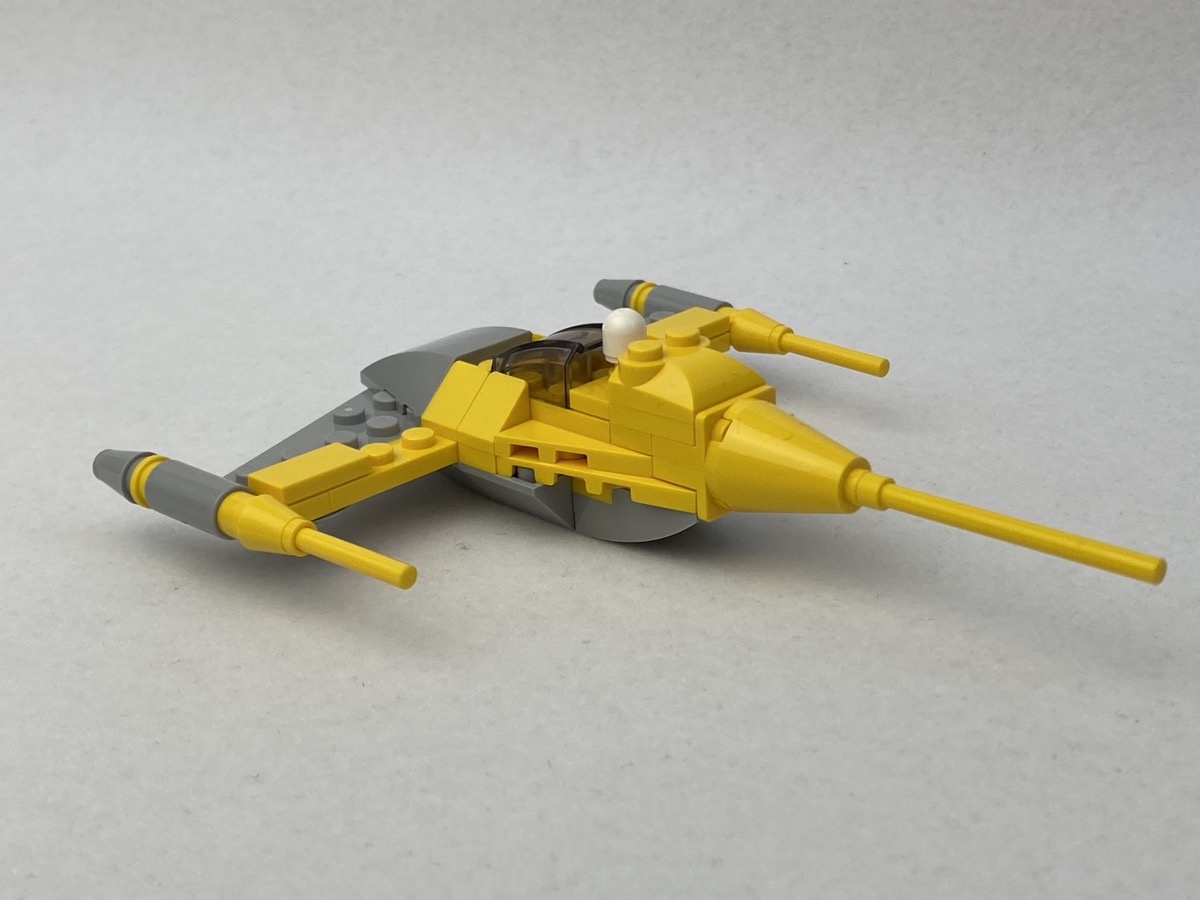 There’s the signature two tone color blocking of grey and yellow. Obviously it should have been chrome but obviously that would never happen ever again. It’s got the nice long stems for the tail and the two wing-mounted engines. 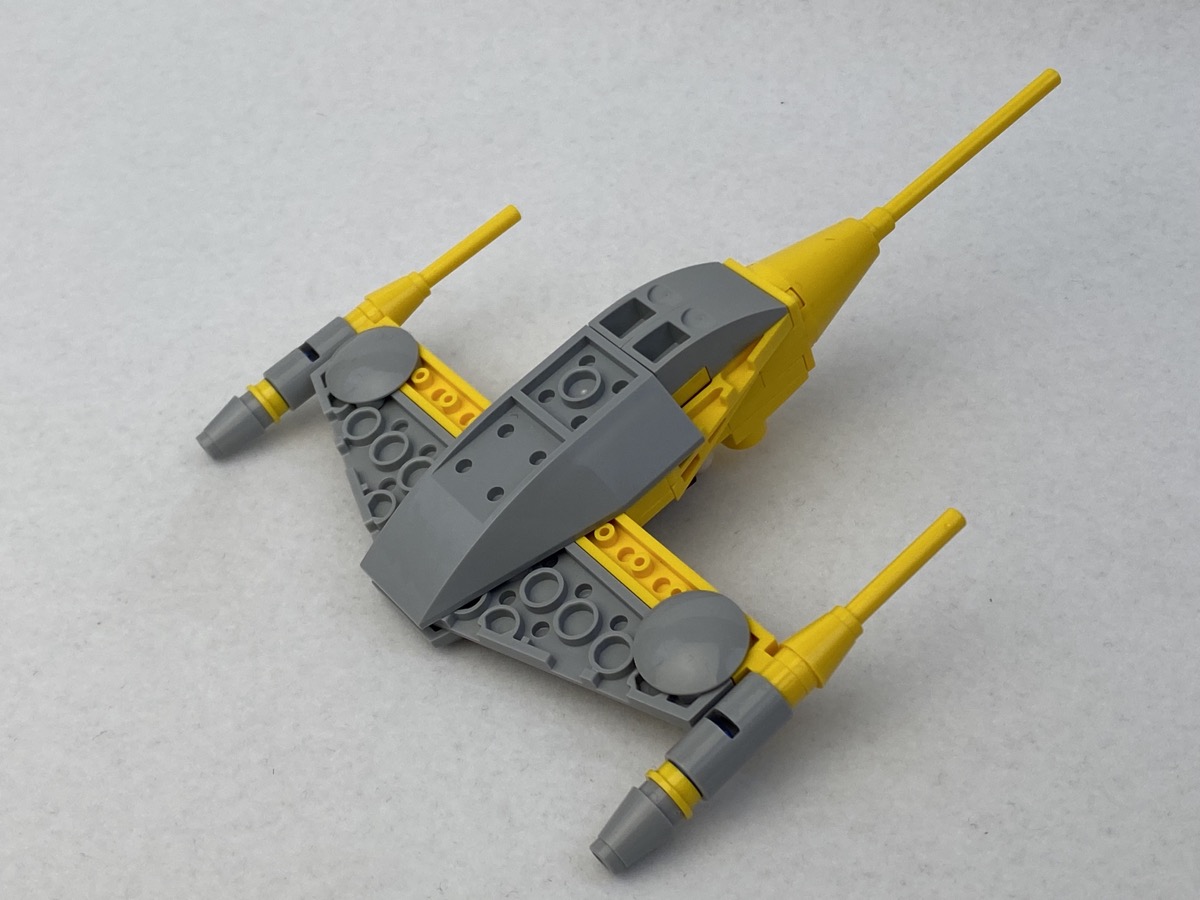 Speaking of engines, they even have a yellow 1×1 round plate sandwiched between the grey elements to recreate that tiny ring of yellow. It’s a small detail but it’s nice to see the designer include it. 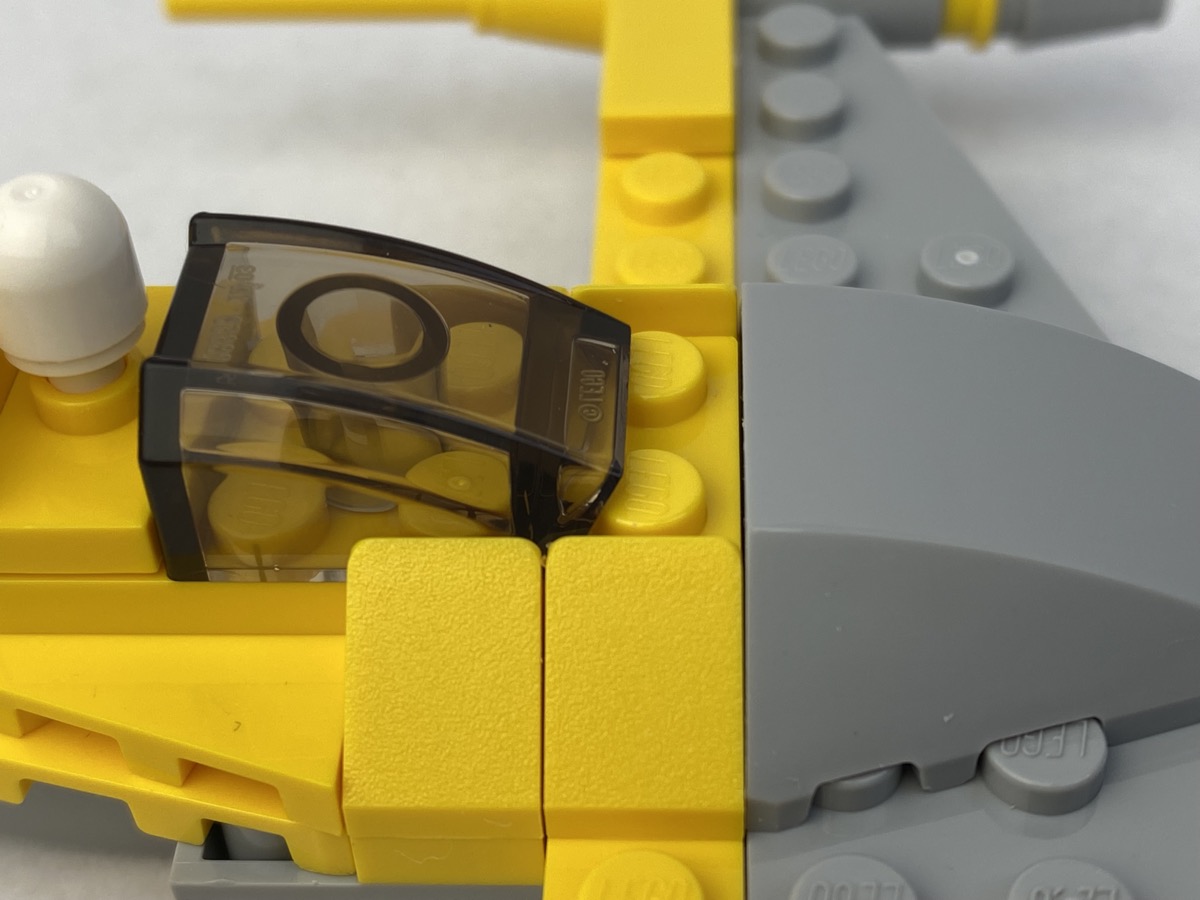 There’s a small gap in front of the canopy but that couldn’t be helped because of the element used to represent the canopy. There aren’t a lot of options to do make that canopy work at this scale so I’m okay with it. 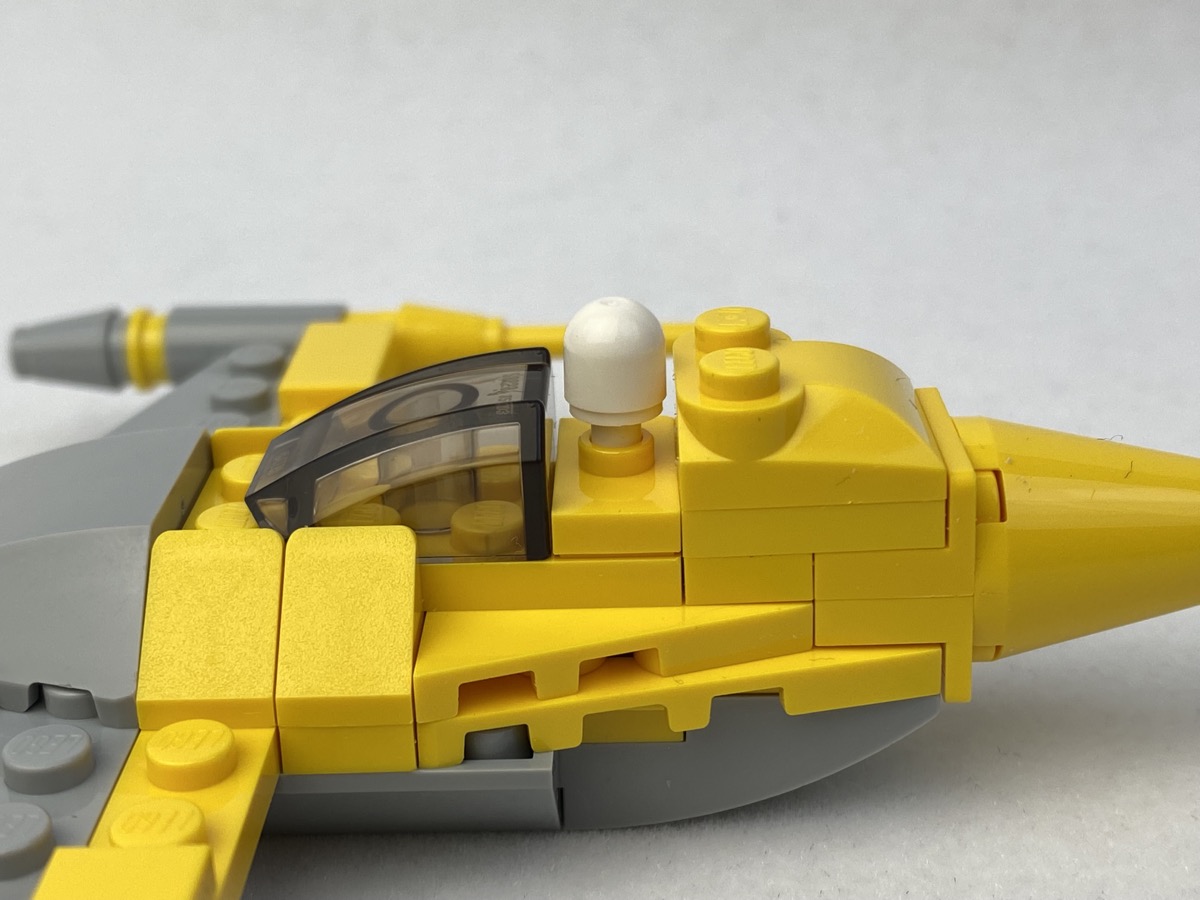 I don’t really have anything bad to say about the model. It’s pretty great overall, that is except the mid-section, specifically the droid port. It uses the light bulb element inserted into a jumper plate to mimic the droid head that would normally stick out of the droid port but the execution is terrible. It makes the droid head look taller than it actually is, and creates a shape of the Starfighter’s body that isn’t quite right.I tried taking a the spare 1×1 yellow round plate with hole and putting it in between to see if it improved things. It kind of did: 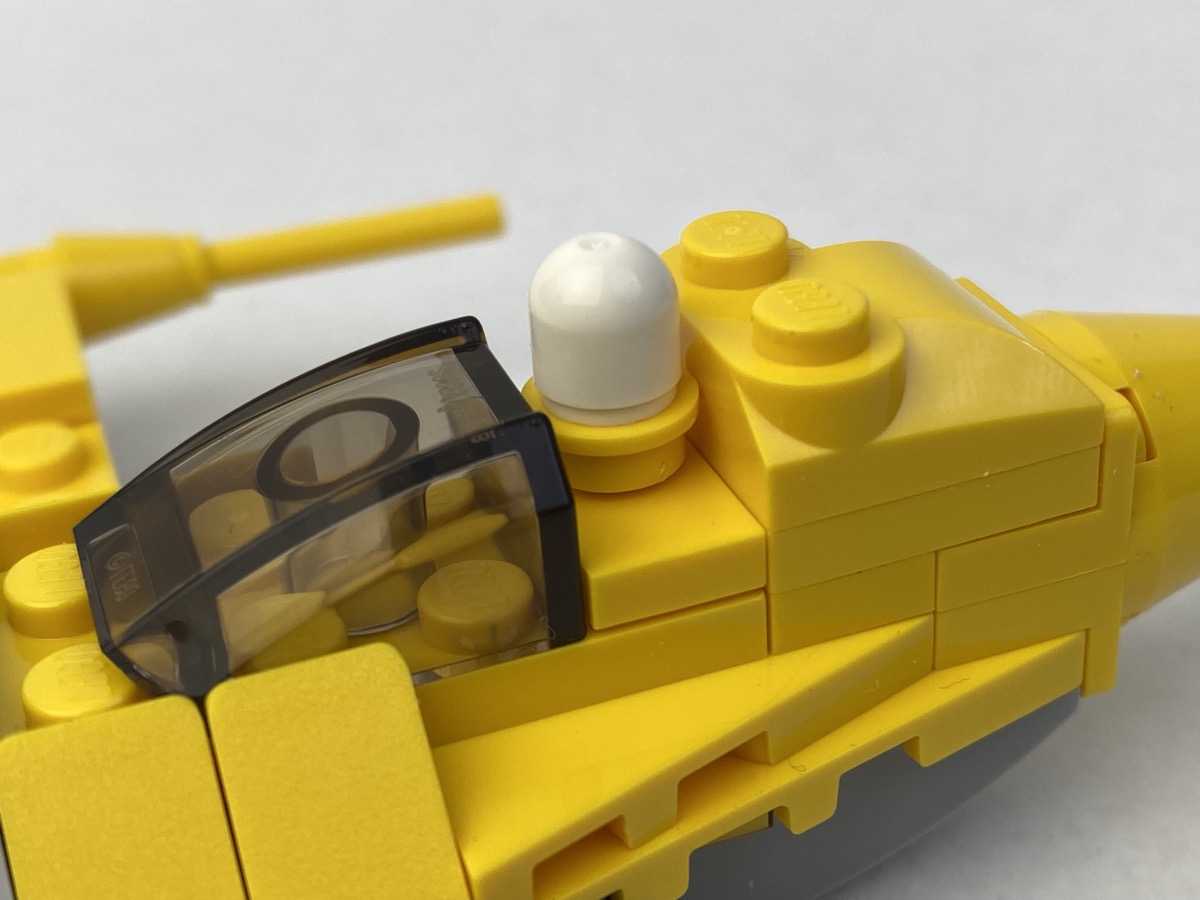 But not by much. It’s still a bit too …. pinched. That’s the best word I can think of for that droid port area, pinched. What LEGO should have done was raise that jumper plate by another plate height or two, and then use something like this piece:

That would have worked better but that piece hasn’t been made since 2005 and as far as I can tell was never available in a solid color. If not that then a just regular 1×1 tile or plate would have worked too. But that white lightbulb? Absolutely the worst option.

This set rocks! That droid port on the Naboo Starfighter may be the ugliest part about it, but I can’t deny how the the sleekness of the N1 comes across beautifully here in a very swooshable mini set.