Pokémon GO made like $5 billion dollars during its first five years of existence. I would assume that it’s primary revenue stream was converting real life dollars into in-game coins that can be used to purchase supplies like Poké Balls, incense, or increase storage capacity for items and/or Pokémon. There were also events where, should you want to participate, you would need to purchase a ticket anywhere from $0.99 to $14.99. Well this past weekend saw another ticketed event, Pokémon GO Tour: Johto for $11.99. The price isn’t really the point here, it’s the reward at the end that got my goat. 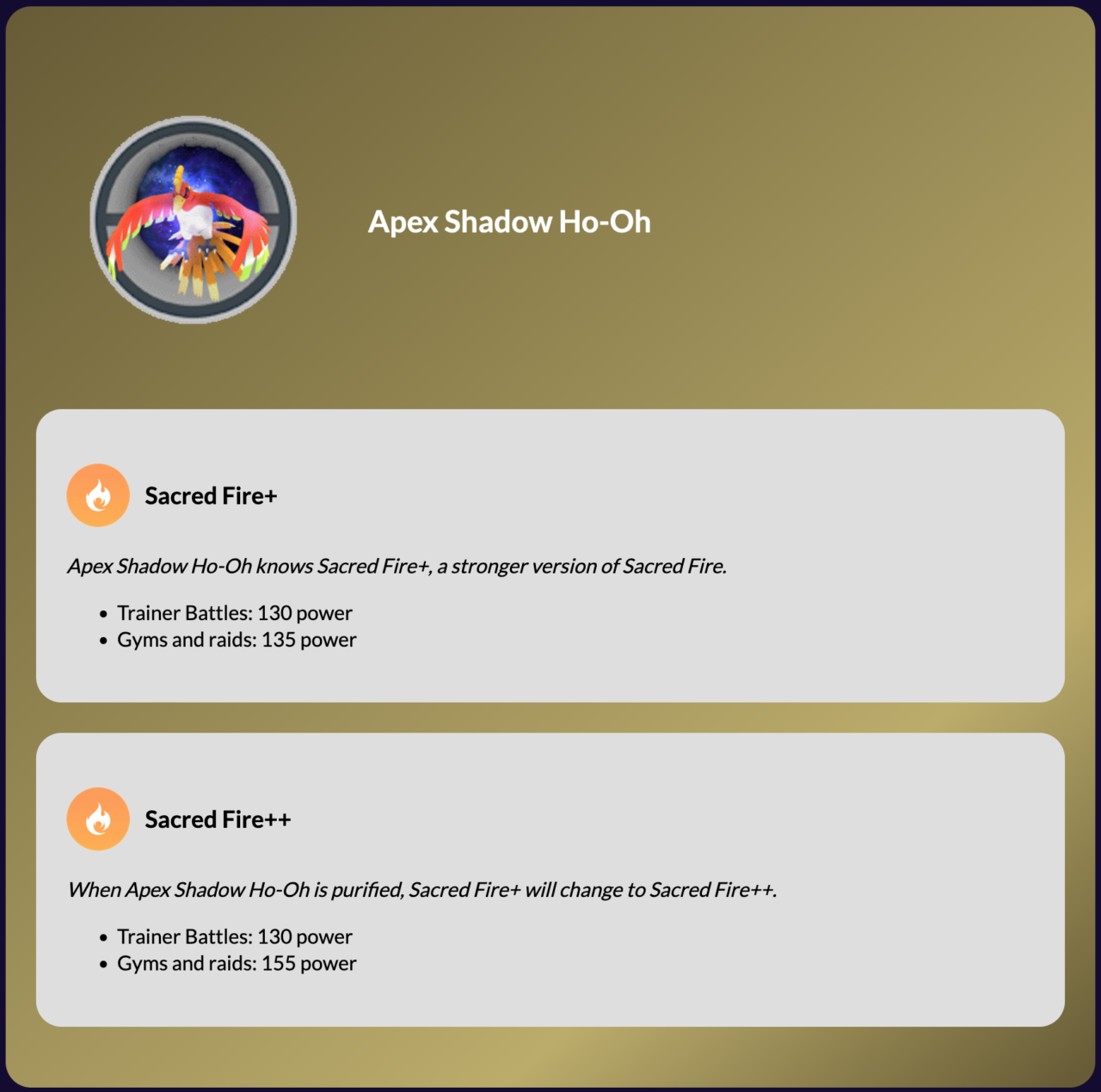 This is Apex Shadow Ho-Oh. If you buy a ticket you’ll receive this as a reward as well as Apex Shadow Lugia. If you’ve never played go, shadow Pokémon are Pokémon that Team GO Rocket have corrupted for their own evil ambitions. You can purify them and make them whole again and by doing so, they get a slight upgrade in their stats. Apex Pokémon? Well I’ve never heard of them so I can only assume that it’s a GO exclusive version of a Pokémon. And because of the word ‘Apex’, I also assume it’s supposed to be pretty powerful.

And look at what you get: a more powerful version of an exclusive move for each legendary. A small upgrade for a Pokémon I already own. It just feels like a pay-to-win scheme. It’s kinda not because you’re not really going to win at anything. In PvP Trainer battles, it’s not more powerful than the OG Sacred Fire move. In raids, it’s slightly more powerful, but ever since discovering Poke Genie, winning at raids was never really an issue. So looking at that $11.99 ticket, something happened and I snapped back. It was like I had an out of body experience and realized you know what, this is not worth my time or money. Because what value does this game bring to my world of Pokémon. It brings nothing. It brings nothing even more now that my boys don’t play it anymore. So what’s the point really.

Now as these ticketed events go, I can certainly keep playing and not put a dime in it, but there was something about this event that just felt gross. I know Niantic is in it to make money, but I’m done. I’ve popped the reality distortion field. So yeah, I’m done. I’m having way too much fun with Pokémon Legends: Arceus right now anyway. I’d rather not play GO while out and about and use that time to just think about what I need to do in PL:A. They are just leagues apart. And yes, I still want to write my review about that game. Maybe next week.