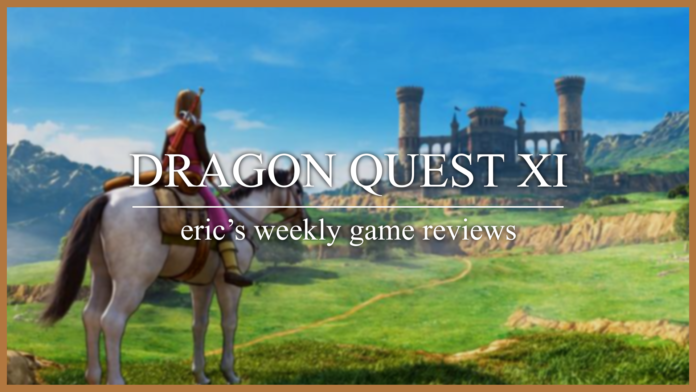 Dragon Quest XI isnâ€™t a â€œbest of the bestâ€ kind of JRPG. Itâ€™s more like when you see a reunion tour of your favorite 80s band. The music is still great, but you notice how weathered and drugged up the band members are. It gives you kind of a weird feeling. You notice a lot of the flaws in the thing you used to love.

Which for me are JRPGs. When I first started really getting into video games, these were my bread and butter. The first console game I played was Paper Mario, followed shortly thereafter with a smattering of SNES JRPGs: Chrono Trigger, Secret of Mana, Final Fantasy III / VI. Final Fantasy in particular stands out to me. Several games in that series still hold a very special place in my heart.

But as we get closer and closer to today, one of two things starts to happen. Either my game tastes changed, desiring faster, more boundary-pushing games. Or JRPGs are very stuck in a rut of traditioniality that bogs down what could be great.Â

Honestly, it could be both. 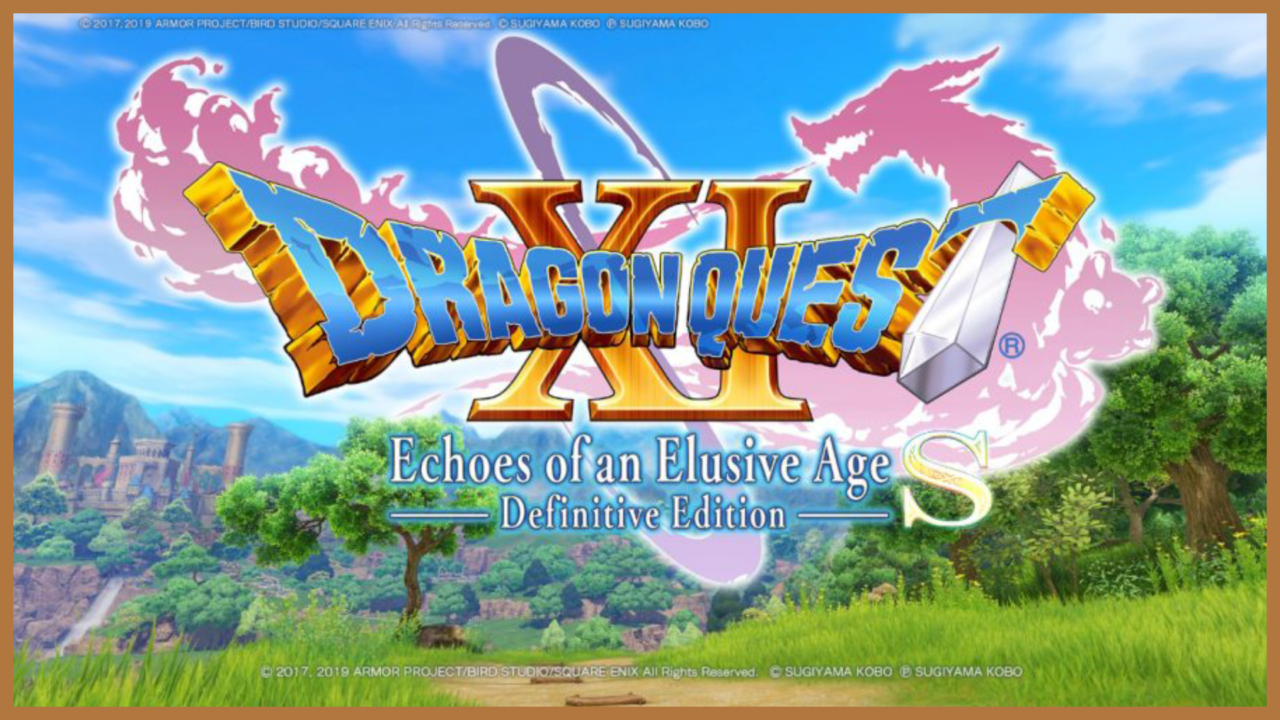 Dragon Quest XI is sort of the culmination of that. It is the most JRPG-y JRPG Iâ€™ve ever played. The good bits and the bad bits are really exaggerated here. If youâ€™re the type of person whoâ€™s into that, who can look past the numerous flaws, then this is the game for you. If you over-analyze games like I do, then youâ€™ll probably lose patience around 12 hours in. Thatâ€™s what I did.

Itâ€™s not like things even start out strong. While many JRPGs have peaks and valleys, Dragon Quest XI is sort of a straight line. The quality never changes from its very direct path. The beginning is pretty boring. The part after that is also boring. Any moments that seem like theyâ€™re building up to something either deviate into an extremely predictable direction, or are so obvious youâ€™ll never be surprised.Â

Let me give you an example of each.

About 6 hours in, your character returns to his hometown. Youâ€™re worried it might have gotten destroyed by the bad guys, but everything looks fine. Except…itâ€™s about 10 years ago. You talk to your mom, your (in present day dead) grandpa, even yourself as a child. I thought this was really cool. I was expecting the bad guy to have some sort of time-bending power that could send a town back in time. No need to defeat your enemies if you can just reverse time. I was getting ready to experience a really cool concept.

Nope, turns out it was just some weird hallucination. Back to normal present day.Â

Earlier on in the game, when you set off on your adventure, youâ€™re told to go tell the king youâ€™re the Luminary (i.e. a mythical hero). You make your way into his castle, and a cutscene plays. At first, everything seems a bit weird. The dialogue and delivery seem like theyâ€™re putting on an act for you. Intrigued, I sit forward in my seat, only to hear one character who looks like this talk in a very evil voice. Oh, yep, these are the bad guys. Even before they reveal themselves, you already know.Â

All 12 hours I played of Dragon Quest XI are like this. If youâ€™re ever expecting anything new or clever, you get teased for a brief moment before the game tells you â€œnah, itâ€™s actually going to be exactly what you were expecting.â€ 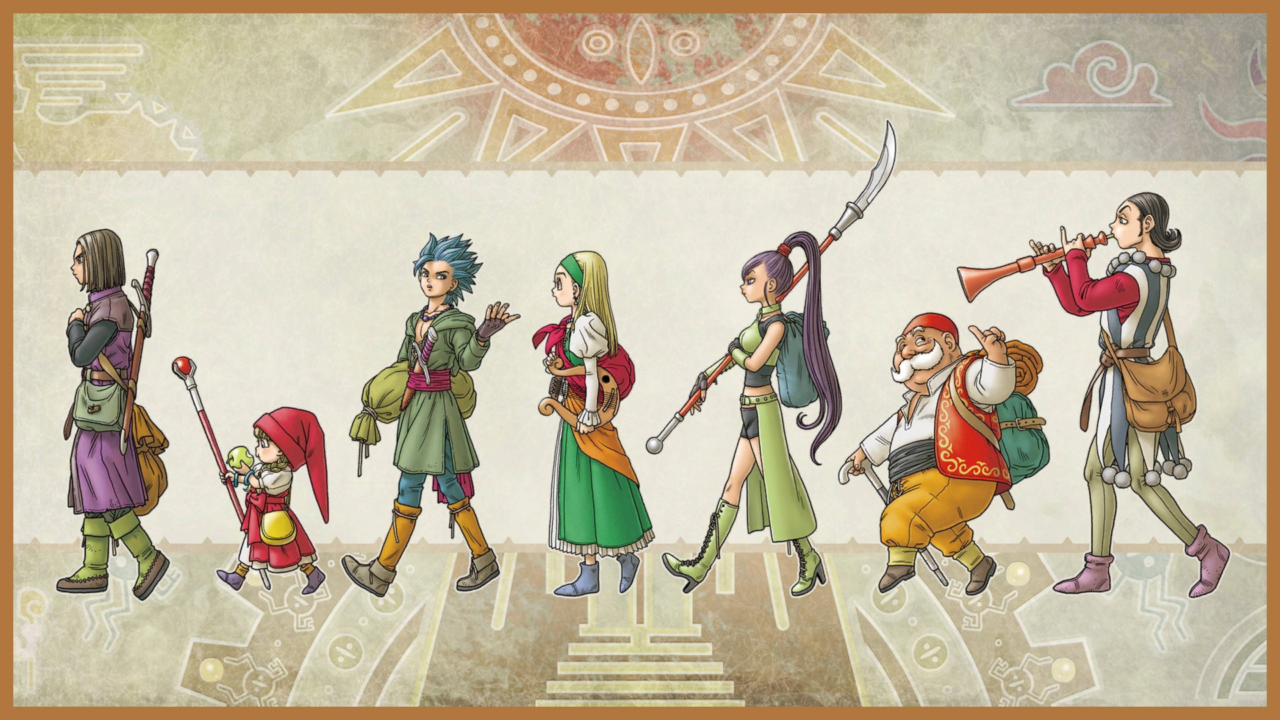 The party members are a little better. Theyâ€™re complete stereotypes, but better than any other side character. You have the Luminary, or â€œHeroâ€, who is a silent protagonist with 0 personality. However, I do like his outfit. Youâ€™ve got Erik, a standard rogue. You have Serena, who does healing magic. And her sister, Veronica, who is an adult cursed to be in a childâ€™s body, because this is a Japanese game, after all. Thereâ€™s also Sylvando, who is very gay and flip flops between positive representation and offensive stereotype with rapid variancy. I stopped before getting the other two party members. One of them is Rab, who is a karate master and also a king in hiding, I think? The other is Jade, who can sexually arouse monsters.Â

None of these characters (except Sylvando, possibly) break new ground, but you spend enough time with them that you start to like them.

Their voice acting is your standard JRPG affair. AKA not really great. Speaking is slow, clear, and lacks any sort of personality. Thereâ€™s also this extremely dumb system where you have to press A after every line of dialogue, even in cutscenes. Well, you can make it automatic, with a solid three second pause between lines. So every cutscene takes way longer than it should, even ignoring the dull and lengthy writing. 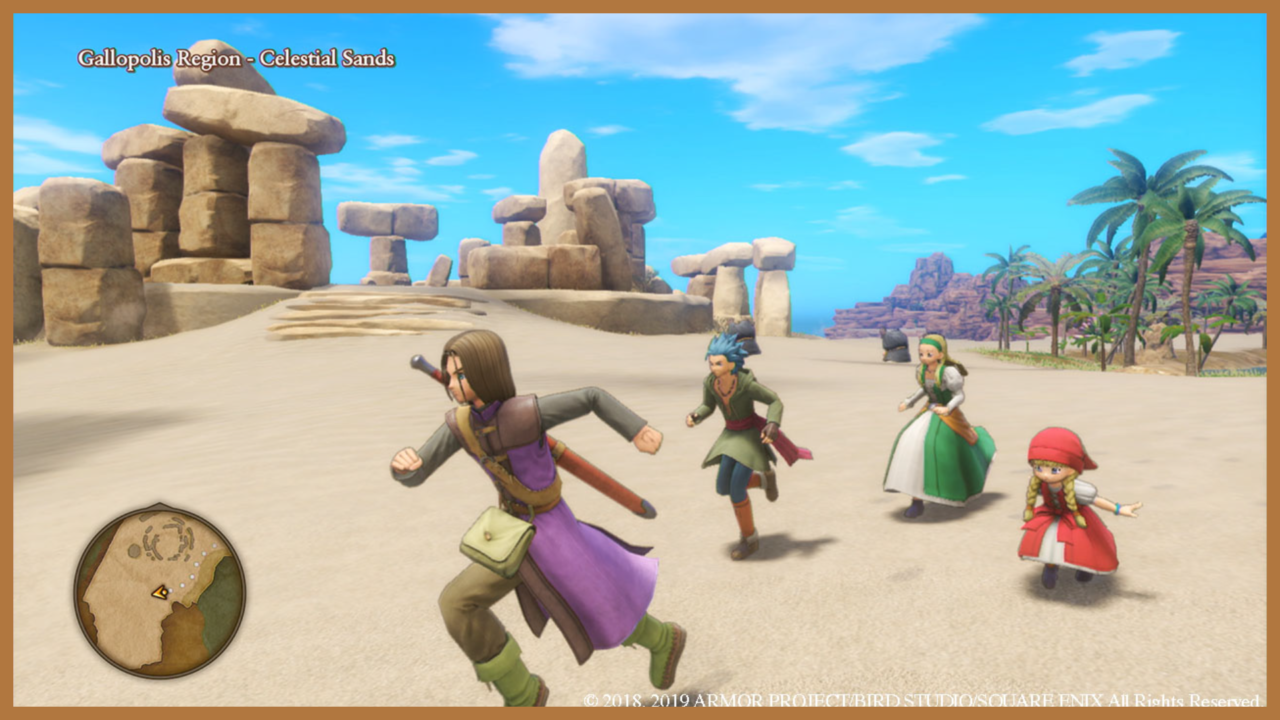 Dragon Quest XI is at its best when youâ€™re just running around the open world, and everyone shuts up. The maps are pretty large, with no random encounters. The world is really stylized and quite pretty, even with the extreme bloom lighting. Youâ€™ve got your standard environments: meadow, forest, desert, canyon.

Thereâ€™s a surprising amount of movement options. You can, of course, go on foot, but you have a horse, and there are several mounts you can ride. Those range from slimes to skeleton dogs, and each have their own abilities. Though unlike, say, Super Mario Odyssey, these abilities are used very rarely and in only very specific situations, like dungeons.

Exploring, however, is very limited. There are a few pretty hidden treasure chests in each map, as well as resources as â€œsparkly spotsâ€ labeled on the map. But beyond that – hidden dungeons, cool areas, special enemies – I didnâ€™t see any of those in my 12 hours of playing. I think itâ€™s something the game would really benefit from, but, as with everything else in Dragon Quest XI, everything is laid out in front of you. 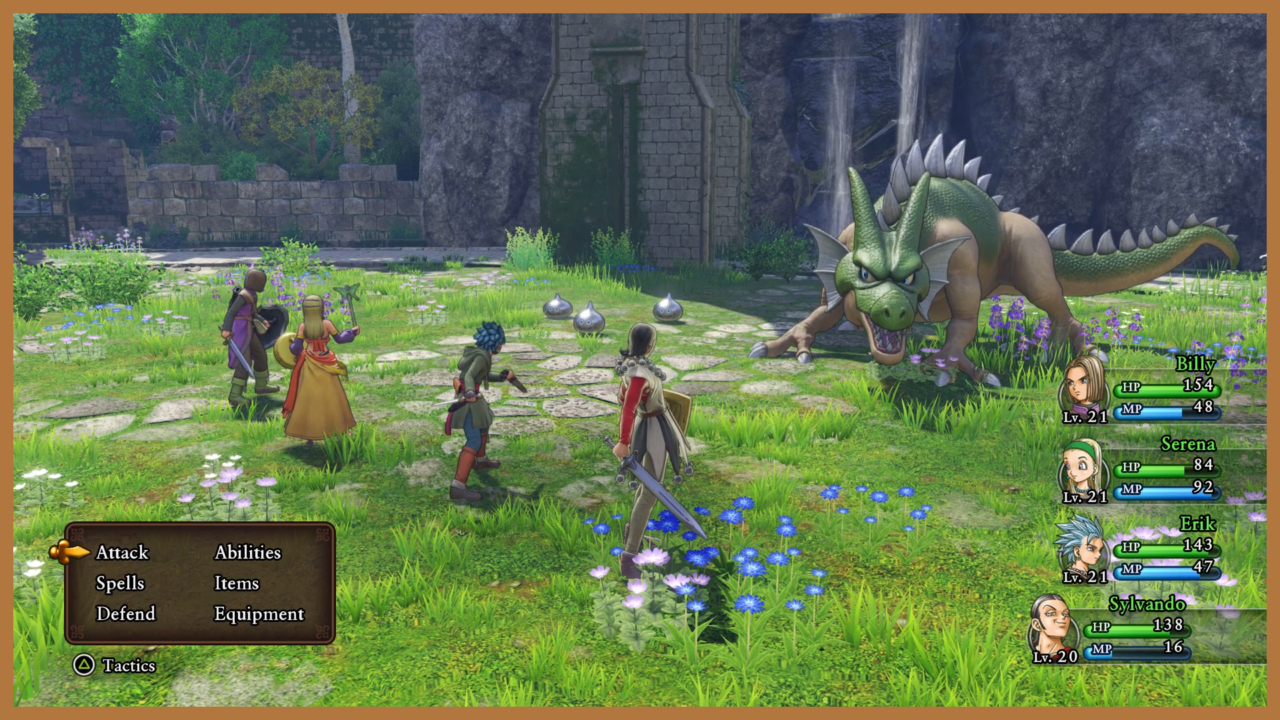 The battles are nothing special, though you can automate things, to a fairly involved degree. If you donâ€™t want to select the attacks for a character like Veronica, you can automate her to use spells as she sees fit. The same goes for every party member. Itâ€™s not as deep a system as Final Fantasy XIIâ€™s Gambit system, but it does remove that JRPG slog a bit if youâ€™re trying to grind.

Character moves are exactly what youâ€™d expect from playing a JRPG. Attack, steal, magic, special attacks. Characters enter Pep mode, where they can do powerful moves. If you have multiple characters in pep mode, they can combine powers to do some ludacris attacks. 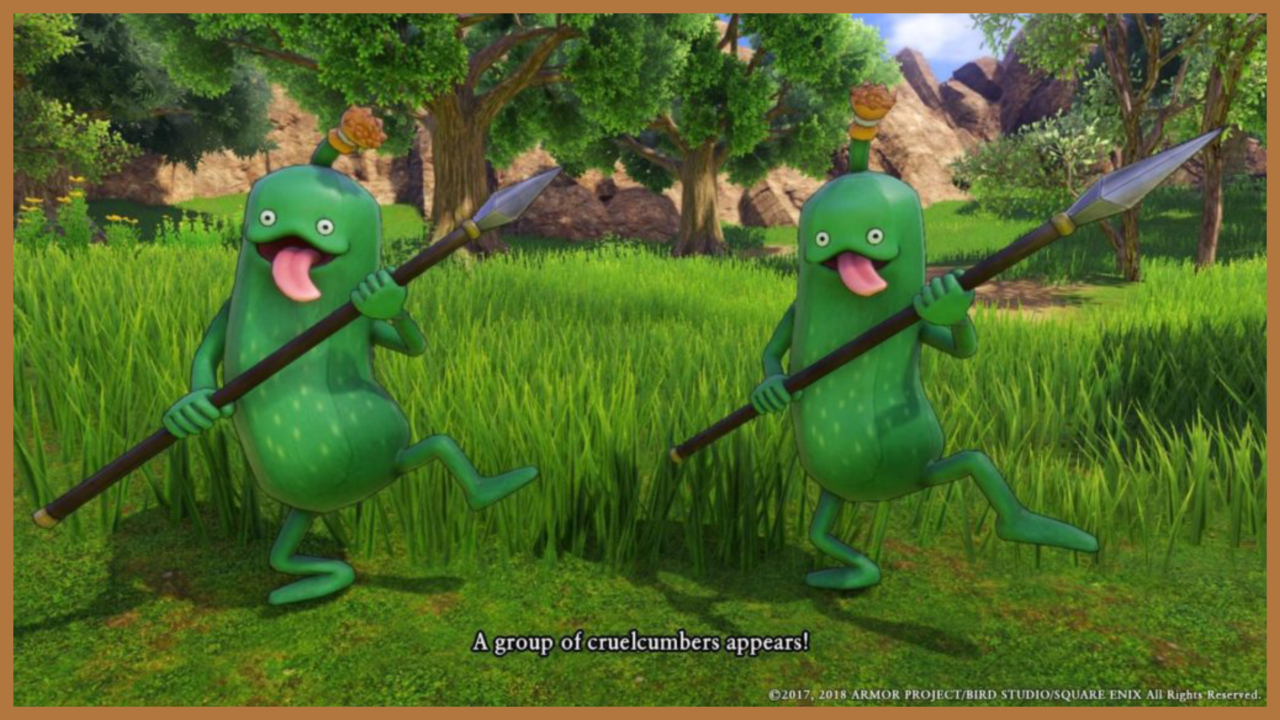 While Iâ€™m not a fan of Akira Toriyamaâ€™s character designs, I do love the enemy designs in this game. Each has so much personality, even without the top notch animation. Sometimes I just like fighting the enemies to see their little dances during the battle. You can tell the animators had a lot of fun with these bad guys, and itâ€™s really a shame to see this compared to the lackluster character animation during cutscenes. 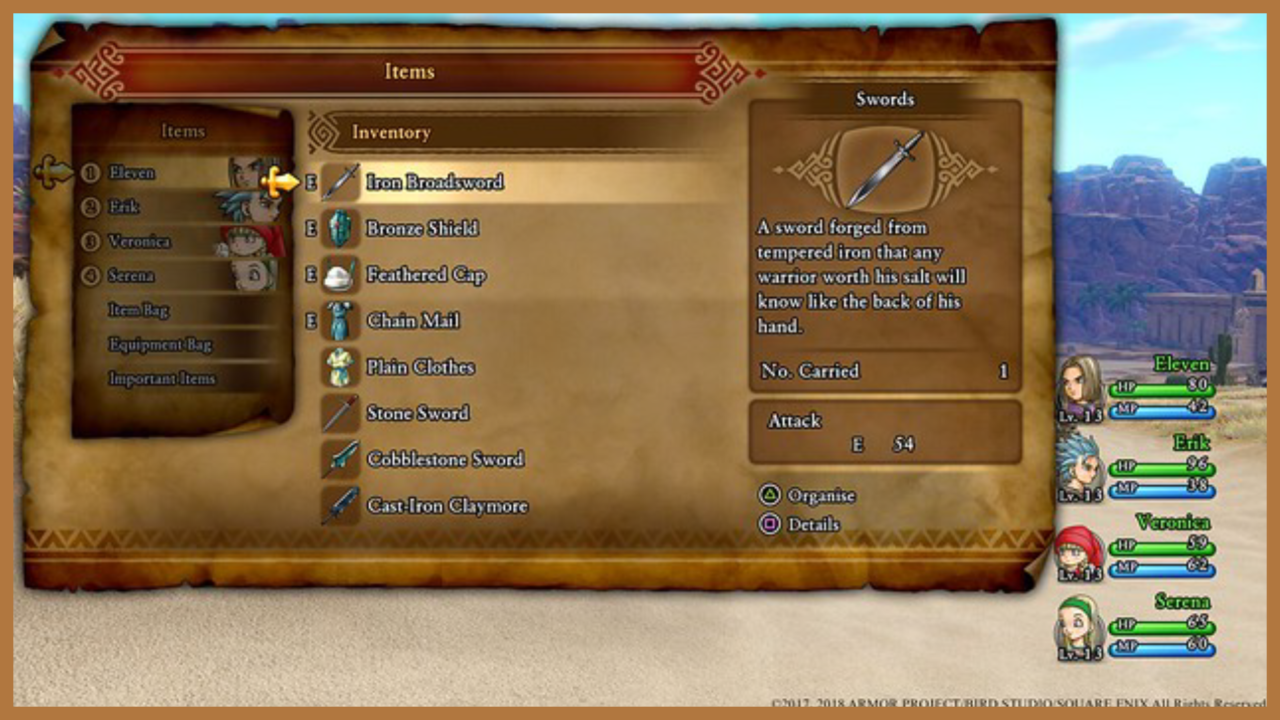 Dragon Quest XI is most egregious with its menu and equipment. Everything about this is archaic. Each character has an inventory. Thereâ€™s a larger inventory pool. Each character has equipment. Thereâ€™s a larger equipment pool. So if I want Serena to have some items that dropped from a enemy, I have to go to Heroâ€™s inventory (because he most likely picked them up) and, one at a time, move each item to her inventory. Unless Serenaâ€™s inventory is already full, in which case I have to select items one at a time from her inventory to the inventory pool, then go to Hero and move the items to her.Â

If just reading that doesnâ€™t annoy the crap out of you, then you might actually like this game. I hated this. Itâ€™s a pointless system. Equipment has the same problem. Overhauling this system should be the first priority for Dragon Quest XII. And itâ€™s an exponential problem as your party grows. 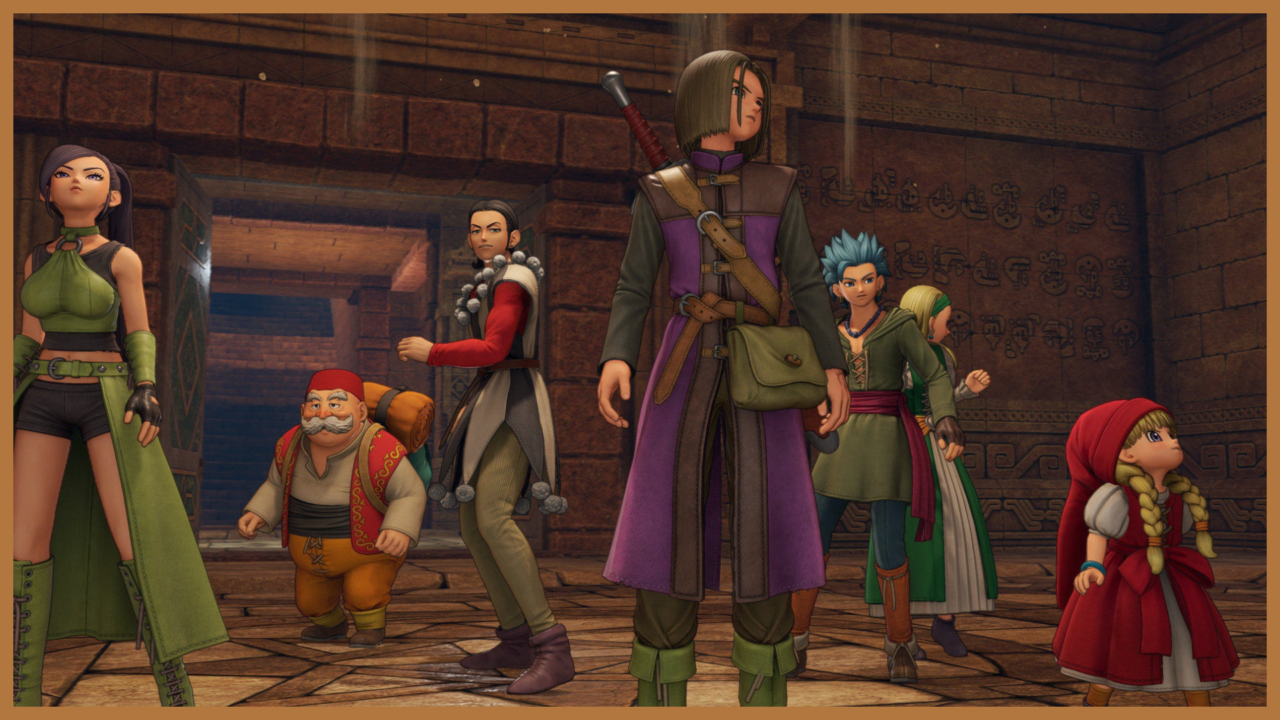 Dragon Quest XI is a game stuck in its ways. While itâ€™s competitor, Final Fantasy, innovates with every game (sometimes to its detriment), I would not be surprised to learn Dragon Questâ€™s systems are the same with each entry. Thereâ€™s nothing wrong with consistency. It allows you to pick up any game without too much of a learning curve. The problem with Dragon Questâ€™s consistency? The systems suck.

If youâ€™re looking for a JRPG that does nothing special, thatâ€™s exactly what youâ€™d expect, then Dragon Quest XI is for you. But itâ€™s not for me. I like innovation, even if the game is worse because of it. This game is a melting pot of every JRPG Iâ€™ve ever played, good or bad. And the problem is when you mix great with awful, you just end up getting bland.