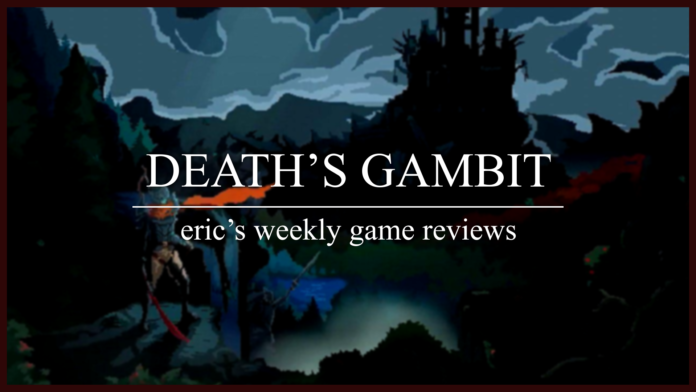 If youâ€™ve been reading this site for a while, you probably know a few things about me. 1.) I mainly only write about video games. 2.) I like Dark Souls.

That it. Thatâ€™s Eric, summed up.

Dark Souls, or Soulsborne games, are very special. Usually extremely tough, with vague stories. You go through a wealth of different environments, fighting all sorts of monsters and bosses. Thereâ€™s often deep RPG elements, too, with lots of different items, armor, and weapons to collect.

Unsurprisingly, with the popularity of Soulsborne games, there have been clones. Nioh, The Surge, Lords of the Fallen, Immortal Unchained…the list goes on. None of these games are particularly great. They have all of those elements I listed above, but they miss out on the spirit and atmosphere that really elevates Soulsborne games.Â 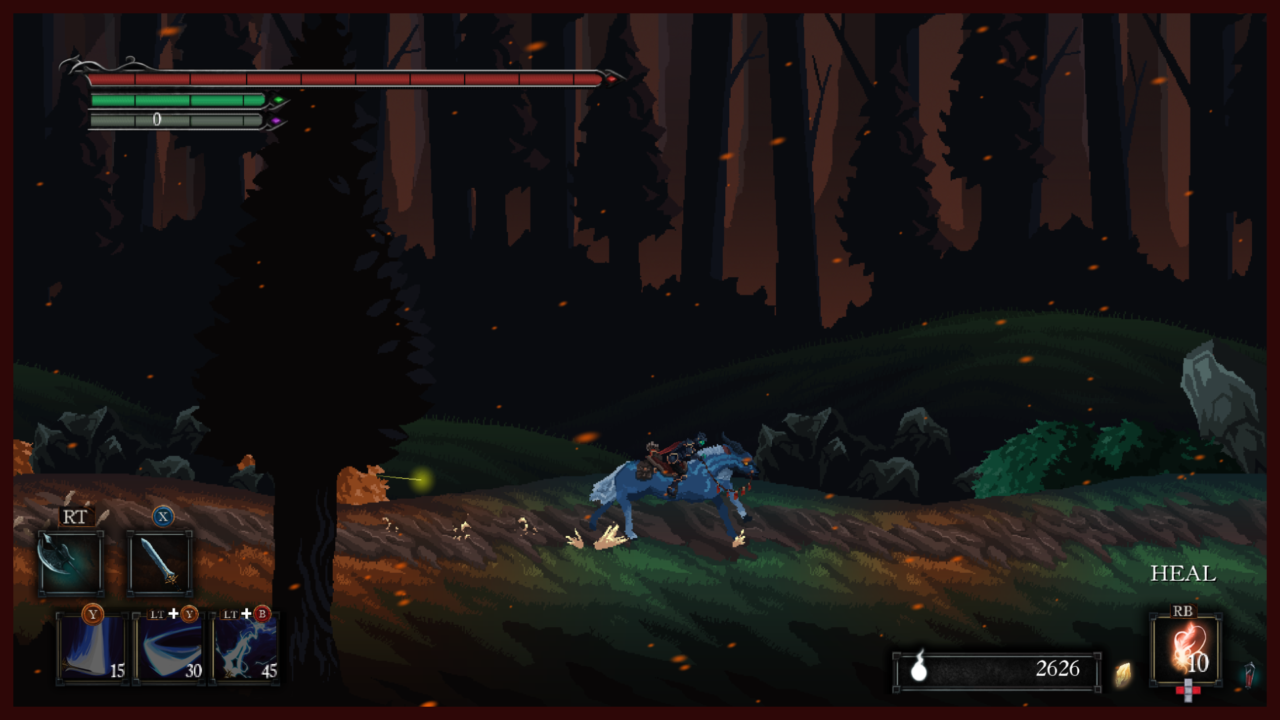 Deathâ€™s Gambit, which is a 2D Soulsborne clone, actually manages to do a pretty good job, though. 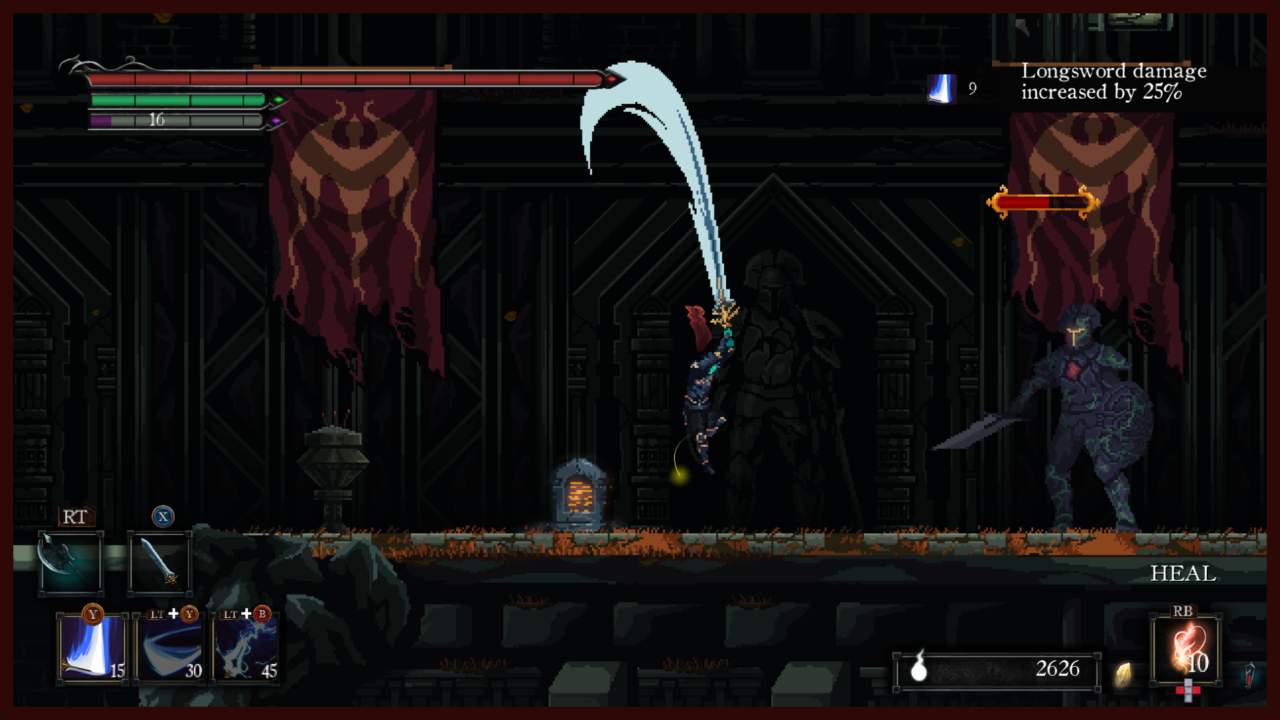 Thereâ€™s a story in this game, but like any proper Soulsborne game, itâ€™s not really a huge focus. Besides, Iâ€™m here for the combat and level design. Deathâ€™s Gambit really excels in the former. With a 2D game, thereâ€™s only so much you can do, but thereâ€™s enough variety in your moves that you can really spice combat up. At any time, you get two weapons, and can use them in all sorts of combos. Personally, I went with the longsword and halberd. One let me get close, while the other I could stay back a bit and start stabbing. Thereâ€™s also aerial moves, good for elevated enemies. Since this game is 2D, itâ€™s also a light platformer. So youâ€™ll be jumping around.

Where Deathâ€™s Gambitâ€™s combat really veers off from Dark Souls is with the special moves. Dark Souls doesnâ€™t really have a need for these, as itâ€™s close, tight combat keeps you engaged. Deathâ€™s Gambit, which is quite a bit easier, can become a bit of slog if youâ€™re just doing the same three hit combo over and over. So to add some spice in there, you can equip three different special moves, which are much more powerful than a regular attack, and usually give you a nice buff as well. (Though they have cooldowns.) Using your basic attack on enemies gives you energy, which you then use for the specials.

This creates a really fun balance, as youâ€™re always trying to use those specials to do massive damage on enemies. So you get in, start swinging, and then hit them with your special. Rinse and repeat, all while dodging their attacks. It also feeds into itself for some specials. One of my specials did decent damage while adding 25% damage to my longsword. So the incentive to use it was high, because then I could get more energy with a more powerful sword. 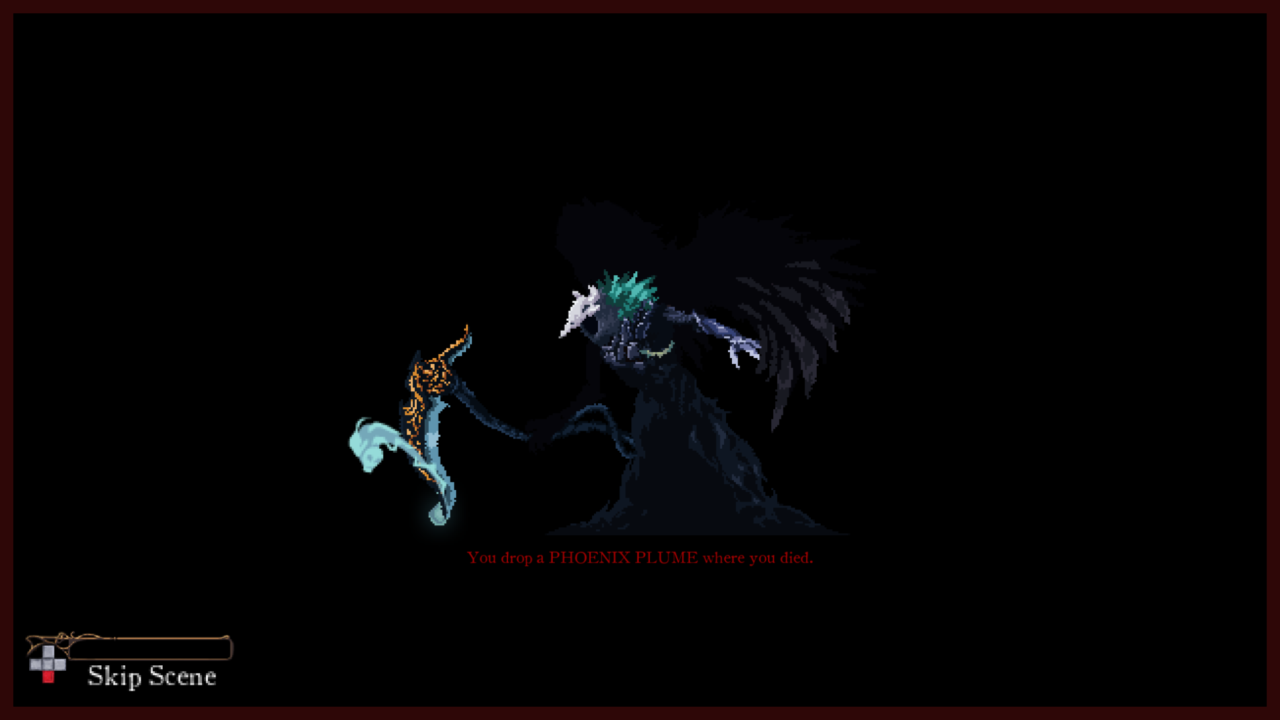 Deathâ€™s Gambit also handles death in a really cool way. In a Soulsborne game, when you die, you lose all your souls, which can be used for buying things and levelling up. You can get them back if you go back to where you died, and that journey, especially if itâ€™s deep in enemy territory, is usually pretty tense. Deathâ€™s Gambit takes a different route, where instead of losing souls, you lose a healing flask.

Iâ€™m really a fan of this system. It forces you to get better at the combat, and not take hits. Or, you could just rush for your flask. And if itâ€™s by a boss or a tough enemy, when you get the flask back, you can start using it to make the fight a little bit easier. I honestly wouldnâ€™t hate seeing this used in a Soulsborne game.

Unfortunately, Deathâ€™s Gambit goes out of its way to make the system too forgiving. Not only can you reclaim your flasks for a very small sum of souls, you also get a ton of flasks. I had 10 by the end of the game, and I never used them all up. If you vastly raised the soul cost (or even removed it), and dropped the number available, youâ€™ve got a system that adds a really new dynamic to the usual death system. 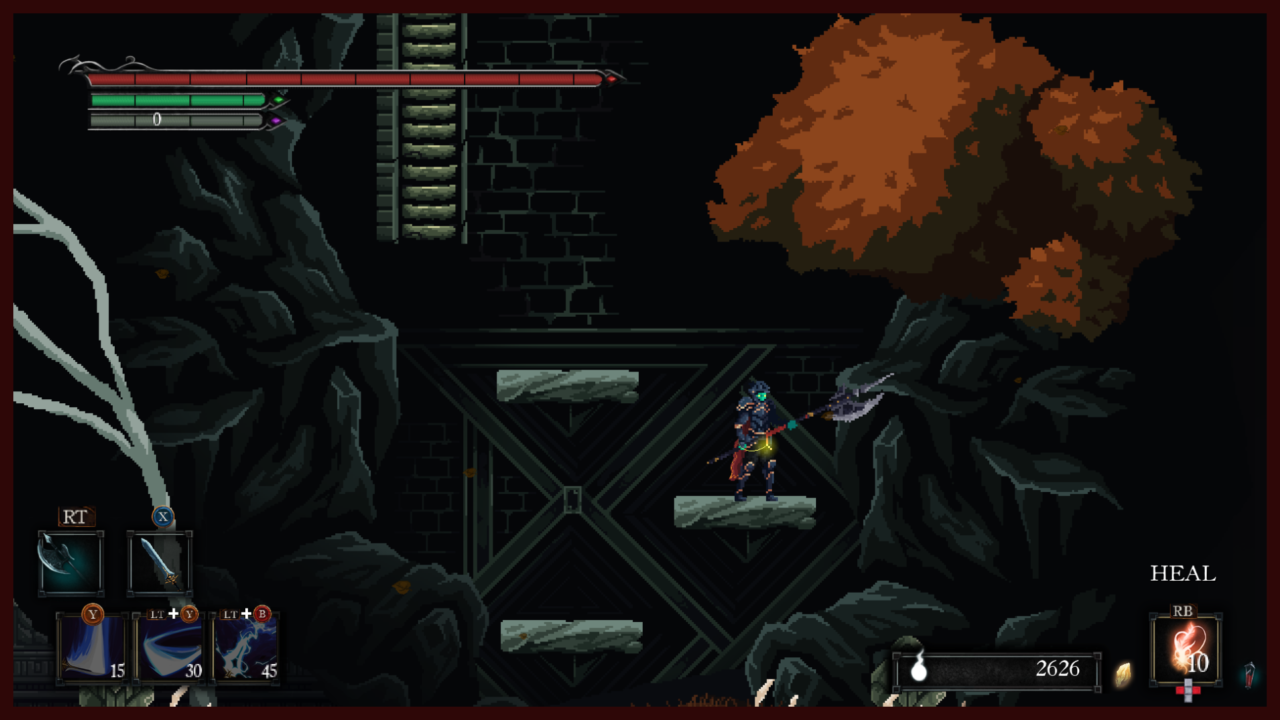 The environments in this game arenâ€™t bad, per se, but theyâ€™re just…impactless. Maybe itâ€™s because Soulsborne gamesâ€™ levels are so strong in realization and depth, but I can barely remember any levels in Deathâ€™s Gambit. I imagine it has something to do with the game being 2D. While Soulsborne games are known for their spectacle, you can only do so much with a 2D background.

The atmosphere isnâ€™t bad, especially in later areas, but it still lacks that immersive punch. Still, even the worst areas of Soulsborne games are still fine because the combatâ€™s great. Deathâ€™s Gambit gets to use that same excuse.

What doesnâ€™t really work for me is platforming with this kind of combat. Thereâ€™s a room in the last part of the game where you have to scale up a large room. The problem is the ton of enemies shooting things at you, including a debuff that flips and reverses your screen. And also traps that knock you off to the bottom. And the bottom itself, which is covered in this liquid that drains your health. Itâ€™s a slow and painful process, and you have to do it every time you approach a pretty hard boss. This one room made me realize platforming in this game works either optionally (like, an enemy is on a raised platform, and thatâ€™s as complicated as it gets), or when not in combat. The combination of the two is rage-inducing. 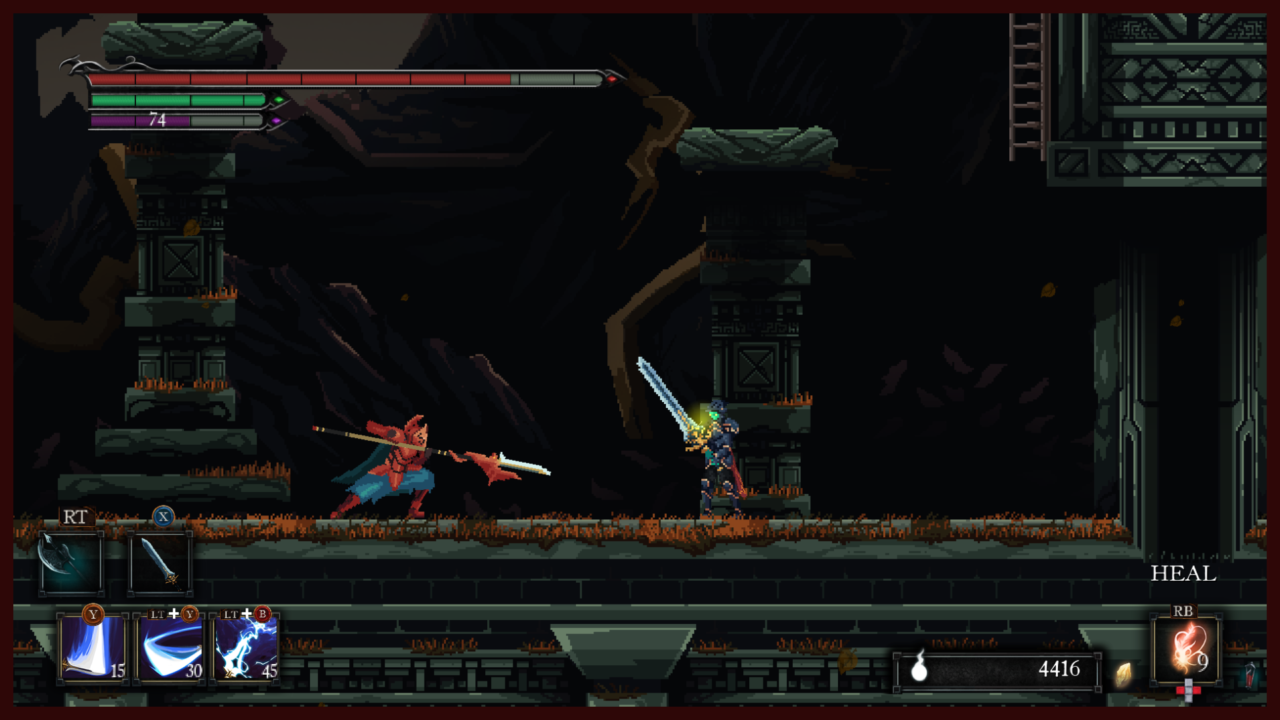 The best part about Deathâ€™s Gambit? It doesnâ€™t overstay its welcome. I beat it in around 6 hours. And I had a good time (except in that one room). It also does enough differently from Soulsborne that, while itâ€™s very obvious where the inspiration comes from, I can appreciate the differences. I played this game on Xbox Game Pass, and while itâ€™s unfortunately leaving the platform soon, itâ€™s only $20 on Steam, GOG, and PS4. Thereâ€™s enough customization here to satisfy multiple playthroughs. If youâ€™ve got that itch for Soulsborne games that Demonâ€™s Souls left you, I canâ€™t recommend Deathâ€™s Gambit enough. A solid 4/5 experience.