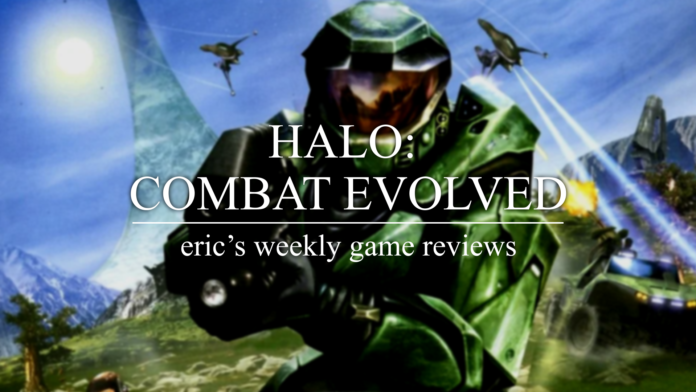 Something new I decided to do this year was review games a lot more. Like, weekly. I play a lot of games, and damn it, I want to talk about them!

So let me take the next few minutes of your time to pick on a 20 year old game.

Halo has such a prestige to its name. Itâ€™s Microsoftâ€™s headliner. You have people my age who grew up playing these games. Master Chief is an instantly recognizable mascot. Even my parents know him, albeit as â€œthat Army guy from the games we didnâ€™t let Eric playâ€.

Going into Halo: CE, itâ€™s hard for me to separate all that mystique from the game in front of me. Especially because, without it, youâ€™ve got a somewhat mediocre first person shooter.

Wait! Wait. I know, thatâ€™s a privileged opinion, in a time with games like Titanfall 2 or Call of Duty: Modern Warfare. Shooters have come a long way since 2001, and it is completely unfair for me to compare Halo: CE to modern day games. So I wonâ€™t. Iâ€™ll contrast it to a game from 1998. 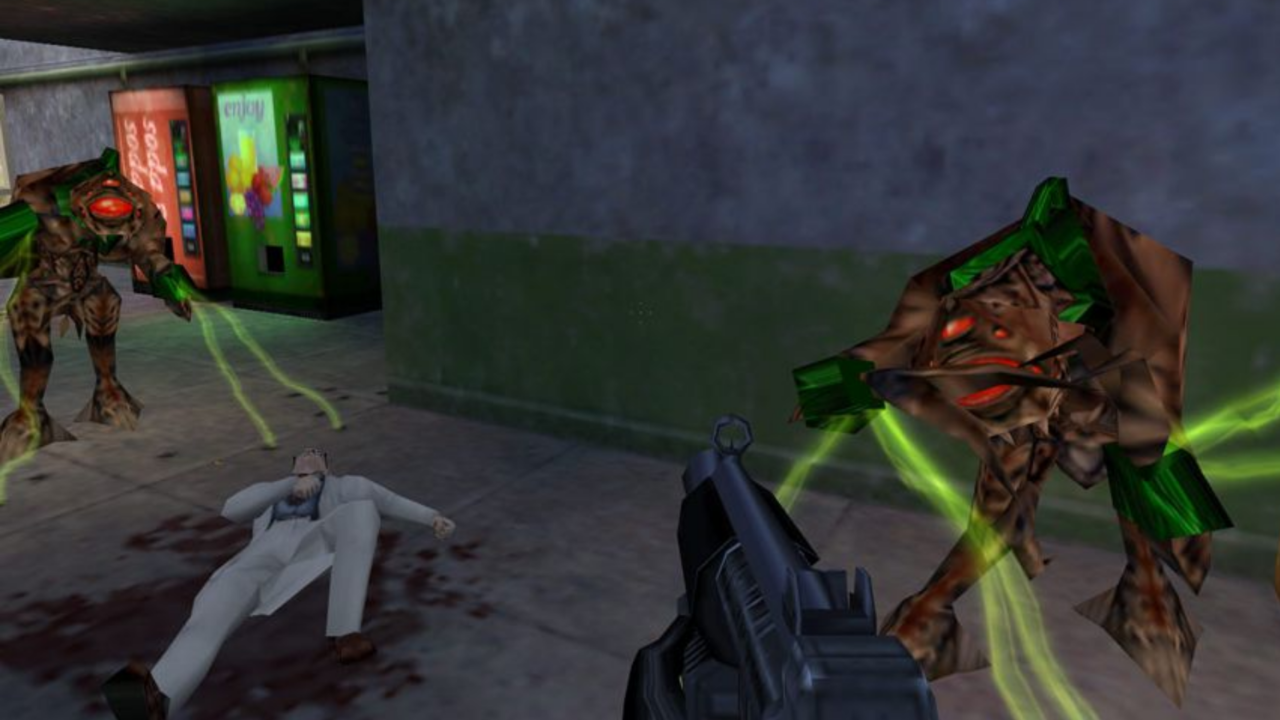 Drawing comparisons between Half-Life and Halo are not difficult. Both feature zombie-like creatures. Neither have you aiming down sights like in a modern day shooter. And both have one man, for the most part, wandering around facilities, killing monsters. Yet, for my money, Iâ€™ll take Half-Life over Halo:CE any day of the week. Why is that? 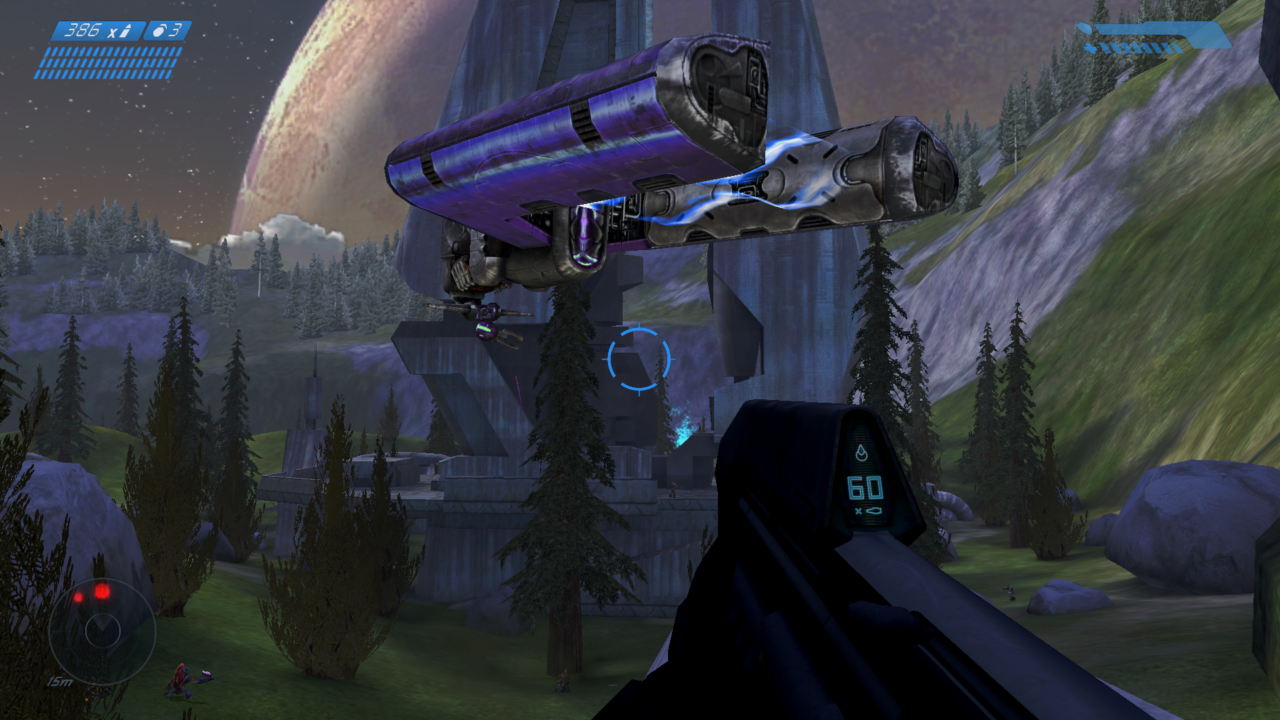 Halo: CEâ€™s levels are long. Like, incredibly long. And boring. Man, are some of these boring. Uninteresting architecture, fighting the same creatures in the same room layouts for anywhere between 20 and 30 minutes. Some of these levels quite literally repeat entire stretches over and over, like in The Library. You follow a glowing little orb of light through giant hallway after hallway, which have no visual distinction, fighting hordes of monsters. I honestly thought after a certain bit that I had backtracked. I hadnâ€™t. Itâ€™s just that repetitive.

Letâ€™s compare these levels with Half-Life. Half-Life is set in a science facility in New Mexico. Easy to understand architecture, room layouts, yet with plenty of variety to really spice up the scenarios. Hallways can lead to giant elevators which can lead to vents. Itâ€™s a masterclass in early FPS level design.Â

But, ok, Halo is set on a…Halo, not an Earth facility. A big ring with trees and mountains and stuff, and with temples all across its surface. Youâ€™ll be diving into those, fighting monsters, and discovering a giant security facility within the ring. Itâ€™s a great concept, and yet, time after time, instead of really stretching the idea of what a weaponized alien ring could have on it, you walk through rooms like these: 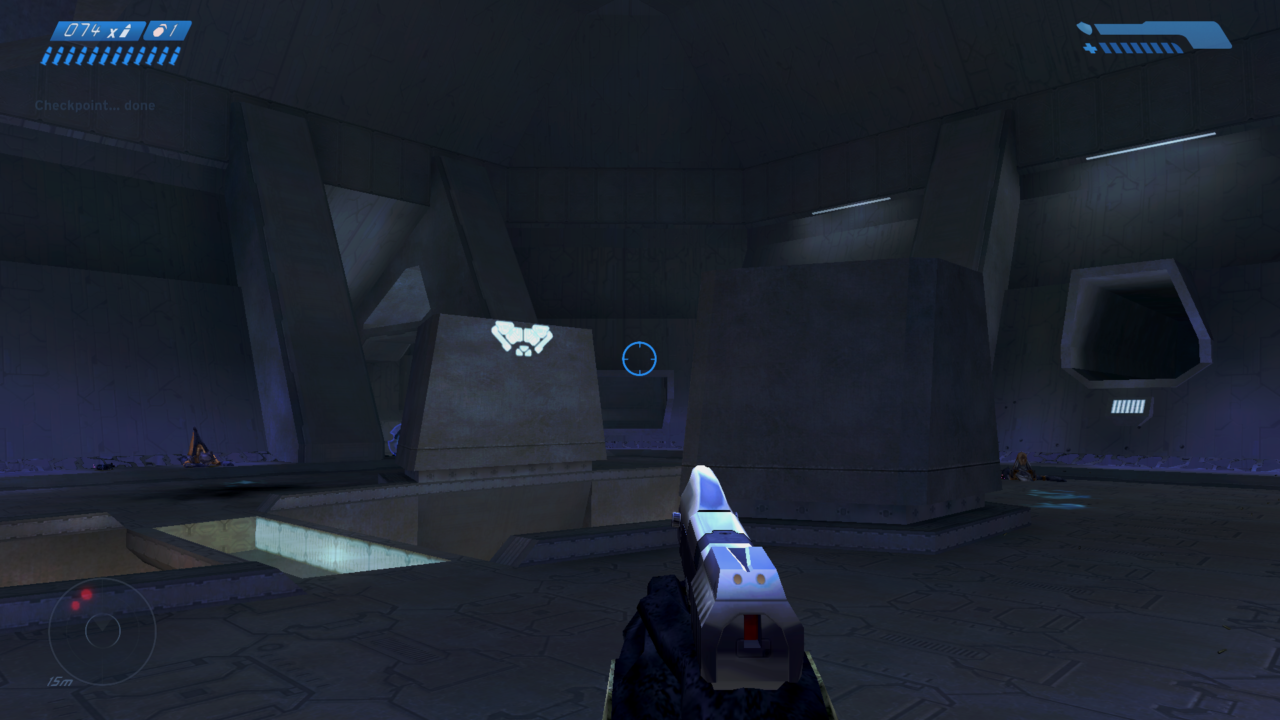 Ew. Itâ€™s as if the level designers and world builders had no communication. Nothing about this screams â€œalien templesâ€. It screams â€œconcrete parking garage in downtown Little Rockâ€. Instead of dazzling us with what a Halo could be, the game prefers to stick us in the mundane.

For my money, there are only two stand out levels in this game: The Silent Cartographer, and The Maw. In The Silent Cartographer, you storm a beach, searching for the control room of Halo. Thereâ€™s a wonderful contrast in scenery between the picturesque beach and the gray facilities. But even within the facilities, youâ€™re introduced to mechanics like invisible enemies, which keeps you on your toes while you navigate the dark hallways. Thereâ€™s driving, shooting, heavy weapons, and the introduction of a new alien, called the Mgalekgolo (Good God). The variety is refreshing.Â

The latter of the two, The Maw, is very similar. You return to the ship you escaped in the very first level, fighting your way back through it. Itâ€™s always nice to see how much more powerful and skilled youâ€™ve become over the course of the game. Then, you get to the â€œfinal bossâ€, where you blow up four engines to destroy the ship for good. Itâ€™s nothing revolutionary, but the hordes of Flood (zombies) chasing after you keeps things moving. Then, an exhilarating escape via car, ignoring enemies in your way as you try not to get caught in an explosion. Itâ€™s great, and you have real motivation for what youâ€™re doing. Mainly – finishing the game so you wonâ€™t have to wander through boring gray rooms anymore. 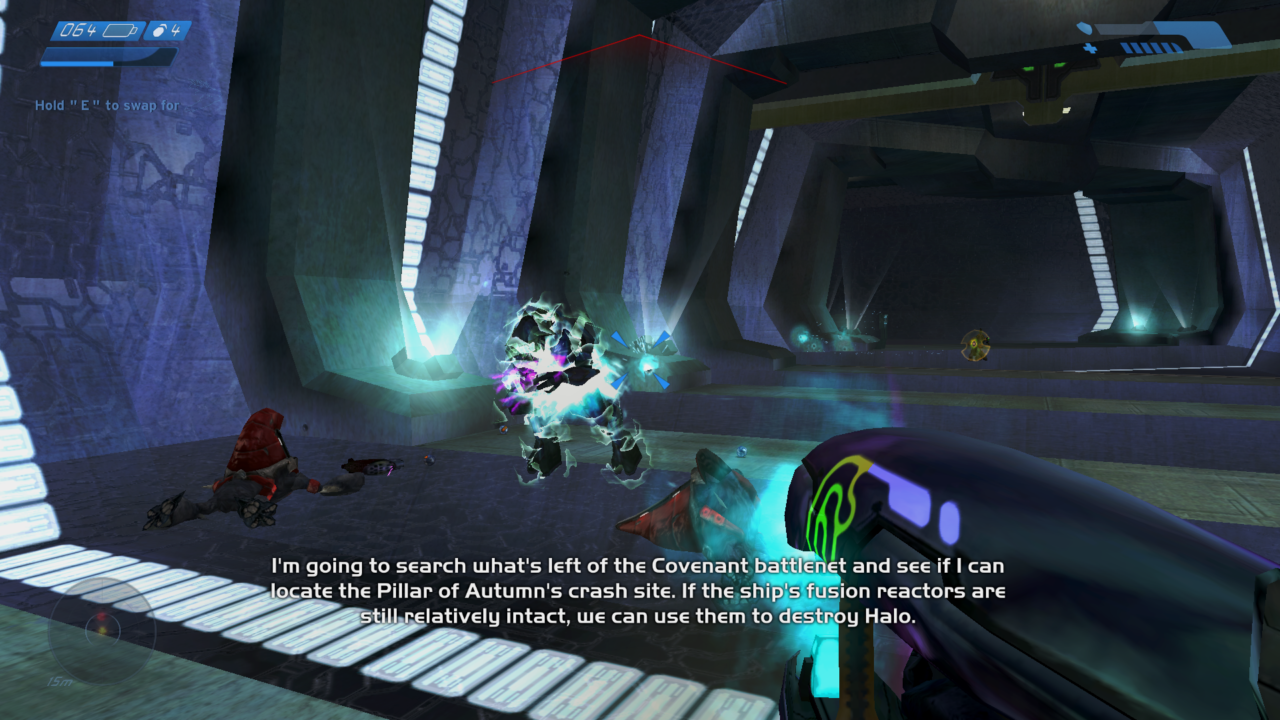 Which bring me into my next point – the gameplay isnâ€™t that great. But this is where perspective is important. I pretty much hold Call of Duty: Modern Warfare (2019) as the gold standard for FPS gameplay, but that was 18 years after Haloâ€™s release. So Iâ€™m trying my best to look at the gameplay from that perspective.

For what Halo was – a FPS on a console, using a controller, itâ€™s actually pretty damn good. You donâ€™t aim down sights, but instead just move your cursor towards the alien of choice. With how inaccurate a controller is, and with the aim assist in the game, I donâ€™t hate this. I played Halo: CE with a mouse and keyboard, and unfortunately it got pretty frustrating to be so inaccurate. But, again, perspective. 2001 gamers didnâ€™t have that luxury.

The variety of weapons are pretty good. Thereâ€™s a human and Covenant (alien) variant of each weapon, with some interesting variety between the two. The Needler shoots a bunch of slivers of crystal at enemies before they all explode, dealing big damage. The standard pistol is powerful, but doesnâ€™t have much ammo. The Fuel rod is basically a one hit kill for everything, but it shoots extremely slow. What adds to all this is how quickly you burn through ammo. Throughout any one level (which, remember, are very long), youâ€™ll be swapping between 10 to 20 different weapons. Itâ€™s kind of a double edged sword, because on one hand, you never get attached to a weapon, but on the other, weâ€™d probably all just be using the assault rifle from the first level for the entirety of the game without using any of the other cool guns. So I get why Bungie made this choice.

My biggest issue with the gameplay is a lack of punch. Shooting an assault rifle doesnâ€™t really feel like anything. Part of that is larger enemies have shields, so your guns really donâ€™t do anything for a few seconds, but even then, impactless. I believe this adds to the larger feeling of slogging through levels.Â

However, this all changes when fighting the Flood, especially with the shotgun. They go down so easy, but thereâ€™s so many of them. Itâ€™s therefore very easy to see the effect of your gunplay. 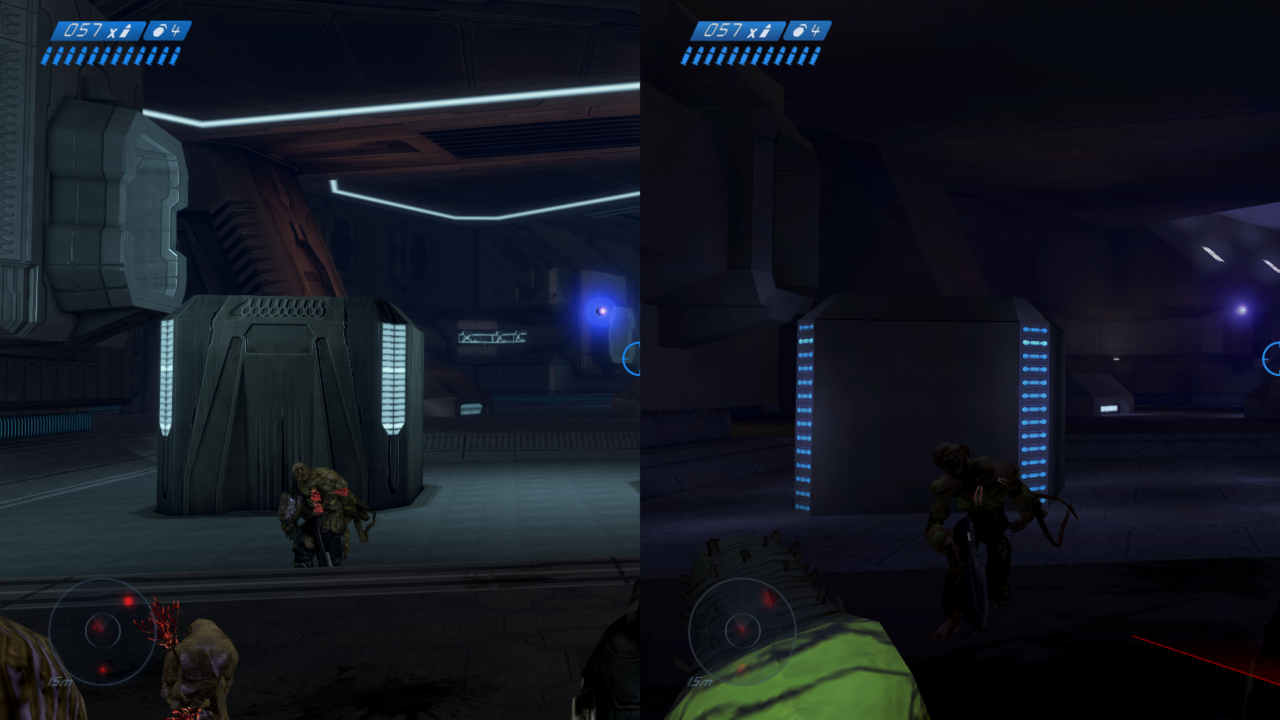 So I played Halo: CE through the Master Chief Collection, which has these â€œupdatedâ€ graphics. But, Jesus, they look bad. The graphics look really muddy, and thereâ€™s just random designs on a bunch of these walls for no clear reason. Itâ€™s awful. The biggest offender? You can barely see the shields of enemies. So youâ€™ve got no clue when their shield runs out and youâ€™re actually damaging them. Luckily, the game offers you the option to switch simultaneously between the regular graphics and the â€œupdatedâ€ graphics. Itâ€™s astounding how much of a better job the older graphicsÂ  do than the updated ones. 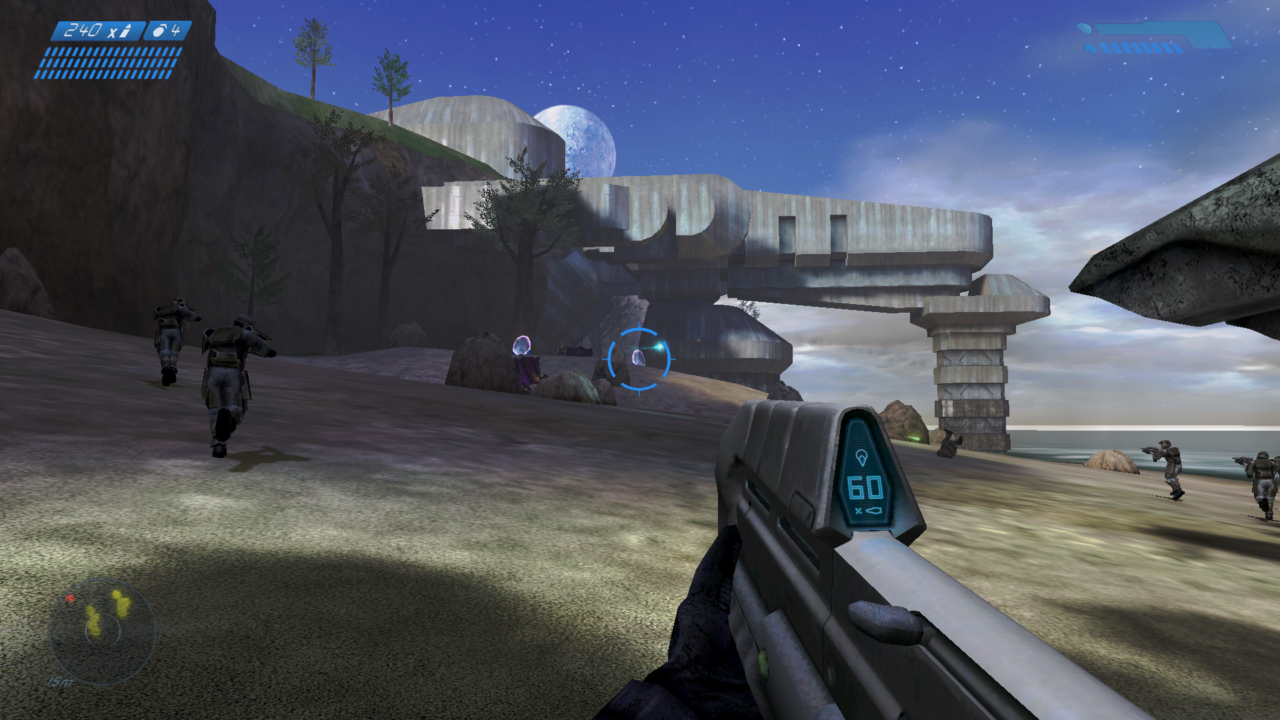 Halo: CE has its issues, but youâ€™ve got to respect it at the same time. It pretty much single handedly sold the Xbox in its first year. The FPS genre is built on this gameâ€™s back. I think Halo: CE symbolized the end of classic FPS games like Goldeneye, Quake, or Half-Life, and led into a far more homogenized genre. Nowadays you can pick up 90% of FPS games and the controls are exactly the same. Haloâ€™s to thank for that. And thatâ€™s not a bad thing.

Iâ€™ll give Halo a 3/5. Did I enjoy my time playing it? Not really. Itâ€™s an archaic (by todayâ€™s standards) game, but so much of what this game did led to the games I love today.

Now, to see how much changed for Halo 2.