It’s pretty rare anymore for a game to build up in hype over time for me… usually I just get excited at the outset or I wait and see because it doesn’t grab me. When we first saw Marvel’s Avengers and the gameplay (last year, I think?), I wasn’t wowed by it. I was far more excited for Marvel Ultimate Alliance 3 coming to Switch and… yeah, that game was a disappointment. I was going to review it for the site but it was so imbalanced and boring I just couldn’t bring myself to play it long enough.

It wasn’t until more of the story was revealed that Square-Enix’s Avengers game really got me. The gameplay looked okay, but not spectacular. There were details that came out after that said the transition was pretty seamless and the characters played uniquely, so that was nice. But once I saw that the game wasn’t just going to pull from the original movie cast, but also brought-in, and focused on, Ms. Marvel, I was hooked. Seeing now that the antagonist is A.I.M., seemingly a more comic-oriented AIM headed by M.O.D.O.K., I’m now in the “I cannot wait” category.

I’m almost to the desperate point for a good Marvel game to play; my old standard was Marvel Heroes, a MMO-ish game that imploded a couple of years ago by catastrophically bad management and behavior at the top. It was a kind of Diablo Clone that was great mindless fun with a lot of unique behavior for the characters. Nothing has really come close to that in some time.

The September 4th release date is starting to come up on us too, and with it there are pre-orders for the game. I’ve been vocal against preorders in the past, unless there’s actually a limited product in play (or, more commonly, you want to preload the game a day or two early and play right away). At least with Square, you know you’re likely going to get a decent game, so of the AAA studios out there, I feel a bit better getting a game closer to launch. 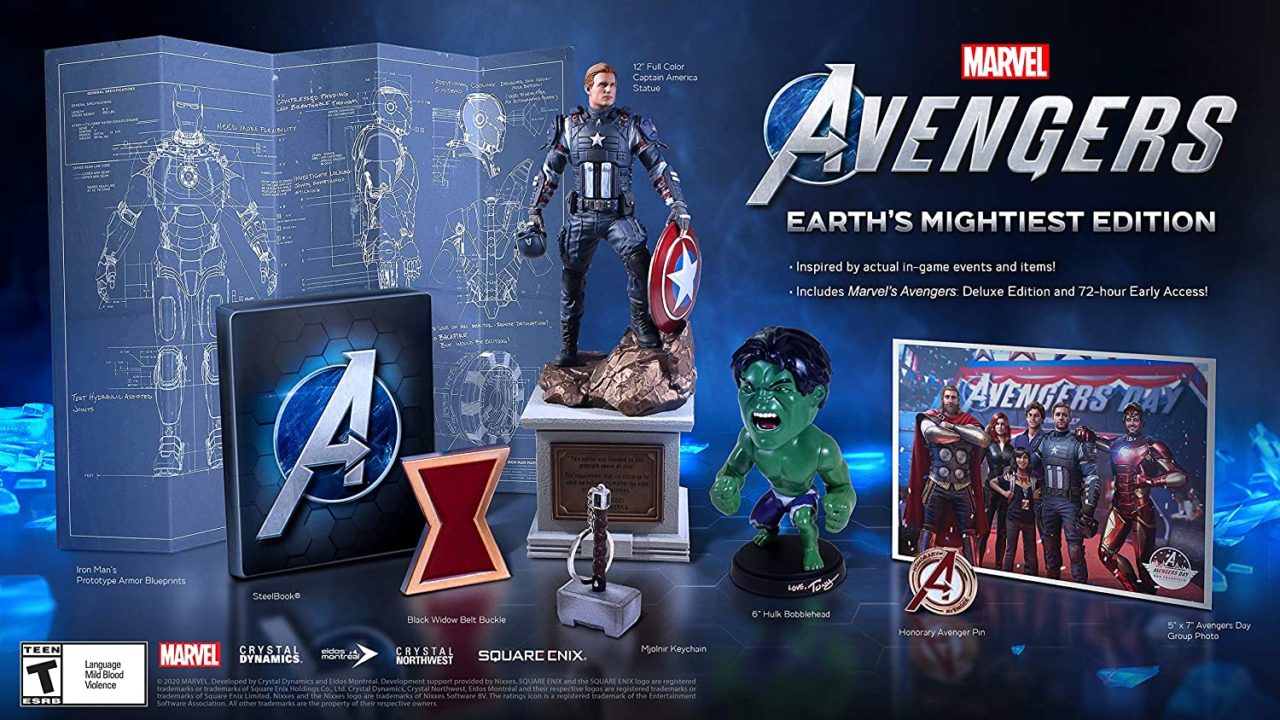 As always, there are several different versions… mostly with just some different costume options in the pre-order and game content. It’s unclear which thing comes with which, but there’s a physical, digital, deluxe, and “okay you crazy people” editions available. That being said, the Earth’s Mightiest edition seems to come loaded with stuff. An obligatory statue, a pin, Black Widow belt buckle, Mjolnir keychain, and a Hulk Bobblehead. Oh, also, the deluxe version of the game… all for $199 USD. Which is a lot.

PC is only available through the Square-Enix store and on Steam, but PS4 and Xbox One editions are available on Amazon. Digitally, only the Xbox One version is available for pre-order on Amazon. Best Buy also has them up for pre-order, and is offering $10 in certificates if you are a RewardZone member.