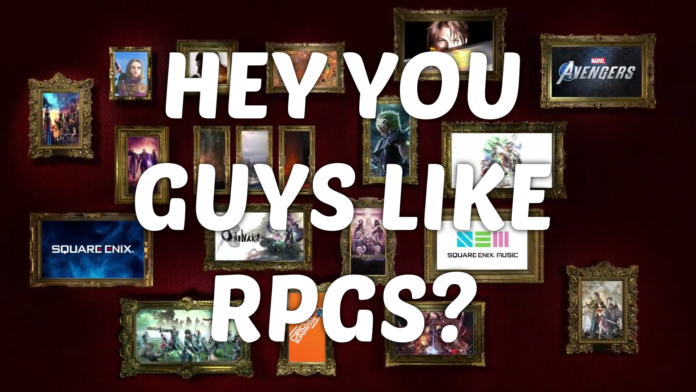 Compared to the scummier companies who frolic the earlier days of E3, Square Enix isnâ€™t so bad. And, wow, seriously, their conference showed game after game after game. Now, would I play any of them? Doubtful, but Iâ€™m sure someone would.

The big dog, the reason weâ€™re all here, is the Final Fantasy VII Remake. They showed off the new battle system, blending a mix of FFXVâ€™s ARPG square to attack system, FF7â€™s ATB wait, think, attack system, and FFXIIIâ€™s stagger system. Itâ€™s an incredibly interesting system, and while personally I felt that FFXIIIâ€™s battles suffered from enemies with HP that was way too high, meaning you would be building up stagger for about 15 minutes on a boss, the blend of the other two makes me trust it enough. Plus, the combat system is being designed by the same man who design Kingdom Heart 2â€™s combat system.

Less in the positive end, the remake, releasing on March 3rd, 2020, isnâ€™t the only game. No word on how Squeenix is splitting the game up, but thereâ€™s a couple of guesses across the internet. Ending once the party escapes Midgar makes the most sense, but other potential places are Nibelheim, or the Forgotten City. Personally, I think the Forgotten City would be the best, but considering we havenâ€™t seen a glimpse of anything past the first 15 or so minutes of the game, I doubt it.

More details about the premium editions in Aceâ€™s post.

A video of YouTubers reacting to Life is Strange 2 moments. Iâ€™m not sure if anything specifically is releasing in regards to the game, as the video is called E3 Celebration Trailer. Who knows. Itâ€™s an interesting story concept, at least, looks like. But man I hate YouTubers.

Iâ€™m gonna merge a few sections here, since a lot of them kind of felt the same. They revealed a Final Fantasy Crystal Chronicles Remastered Edition for Switch and mobile, including what looks like online multiplayer. Worlds better than having to hook up Gameboy Advances in the original. The Last Remnant, a game originally released on Xbox 360, coming to Switch. Finally, finally releasing Final Fantasy VIII on all systems, after 20 years in the dark. A remake of Romancing SaGa 3 and a re-released of 2016â€™s SaGa Scarlet Grace Ambitions, coming to multiple systems. Dragon Quest: XI Echoes of an Elusive Age Definitive Editions S comes to Switch.

Octopath Traveler, a beautiful, fun, top-tier music game with the worst story ever is coming to Steam. If you can, grab it and skip the story. Itâ€™ll be worth your time.

Oninaki, which seems like a run-of-the-mill JRPG, was shown off a bit more. Iâ€™m not a fan of these simple 3D JRPGs. They always look far more dated than a 2D, sprite-filled game. But, thatâ€™s Tokyo RPG Factoryâ€™s style, so you canâ€™t deny them that.

Dragon Quest Builders 2, which had the longest trailer ever, was revealed.

They showed two Indie games published under the Square Enix name – Circuit Superstars and Battalion 1944. Thereâ€™s nothing particularly exciting or different about these. One looks like a standard top-view racing game, the other your basic free to play WW2 shooter.Â

A new mode for Kingdom Hearts 3 called Re:Mind, where you can play as other characters during the final mosh battle. There will probably be more, as the Kingdom Hearts DLCs generally change up the combat in a good way.

Some more from Dying Light 2. Iâ€™ve never played the first Dying Light, but the trailer looks intriguing enough that I may check it out. First person parkour in a zombie-filled world. Interesting, to say the least.

Outriders, from the studio behind Gears of War and Bulletstorm. Not much revealed, but crazy gun and enemy designs definitely caught my eye. This oneâ€™s probably a few years out, but it could develop into something cool.

And, of course, Square Enixâ€™s other pillar of their conference, Marvelâ€™s Avengers. Or Marvel Avengers. The name kinda flip-flops. Crystal Dynamics is bringing out the big guns – some of the most famous voice actors to take on some of the most famous role in pop culture right now. It doesnâ€™t seem to be doing anything particularly crazy or different, which personally I would have preferred, to differentiate it from the MCU. It looks like you can play as four (maybe five?) of the Avengers (Cap dies, so itâ€™s unclear whether or not you can play as him). Not sure if itâ€™s a story-driven game, or a multiplayer game, as the trailer shows both, but never clarifies. Ideally, itâ€™ll be like Left 4 Dead with superheroes. A man can dream.

So that was Square Enix. Compared to Bethesda, they killed it. Non-stop games, back to back to back. Maybe not games everyoneâ€™s interested in, but games nonetheless.

Iâ€™ll be covering Nintendo as we wrap up E3, so expect that later today.