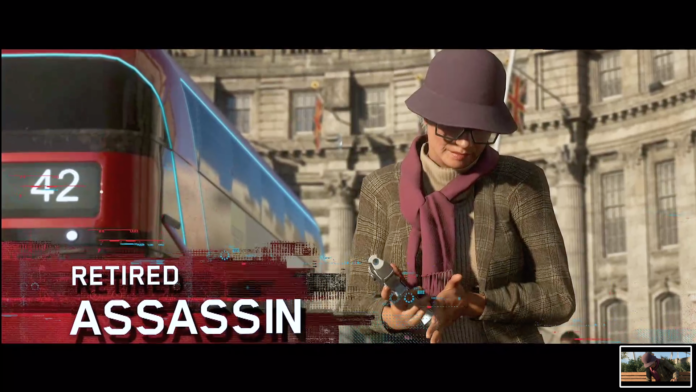 Oh, Ubisoft… never stop being so nuts in your press conferences. I mean, you’re not to the level of Devolver Digital, but after that insane intro of Just Dance 2019, I was curious how they were going to top it. A warning about several of the trailers and videos in this, they have plenty of obsene language, so, be aware.

They went in before the conference with Ice-T telling you to be nice online. After that, it was a bit of a nice symphonic mix covering Assassin’s Creed. Compared to last years, it was certainly low key. I’d be hard pressed to come up with an iconic music tune in Assassin’s Creed, but that’s probably me.

Once they were out of that, we jumped right in to what is easily the biggest announcement that was leaked earlier in the week: Watch Dogs Legion (coming out March 6, 2020). If you’re not familiar with the Watch Dogs games, the first one was vanilla dude is a hacker out to avenge his family, and gave us “Ubisoft Iconic” as a joke. It was a decent, if not spectacular, game. The second one, on the other hand, was incredibly fun, had a memorable protagonist and cast of characters, and leaned into the absurdity of the whole thing.

Big props to them for opening with the Gameplay video, and wow, what a show it was. Killing the character they introduce, giving us the general premise of the game, and then, on top of that, giving us theÂ greatest game character to ever exist… HACKER GRANNY! The general premise of the game is that any character you see in the city can be recruited and become playable. They are supposedly unique, with different backstories, and fully voiced. If so… the size of this game will be absurd. Even if they only have a few hundred characters, it would be massive, but they set this thing in London.

It’s also pretty funny that Ubisoft claims that there’s no politics or stances in their games… which if you’ve played the Division of Far Cry (or Watch Dogs) is just absurd. At least in this case they seem to be acknowledging the politics of it with the recent rise of Fascism and Authoritarianism (and the much more specific Brexit themes), and it looks to make a pretty awesome story. They’re clearly going for more of the same over-the-top stuff that made the second game so fun, so this game is jumping towards the top of my anticipated list.

After the high of Hacker Granny, there were eleven million Tom Clancy games announced. There were update trailers for the Division 2 and Rainbow Six: Siege, announcements for a new Ghost Recon game that stars The Punisher for some reason, which includes several other other game modes. There was also a new multiplayer Rainbow Six co-op game, and honestly, I just don’t care about the Tom Clancy games so I’m not going to be able to give a lot of hot takes on these games.

There were a lot of other announcements, some which were predictable, like Just Dance 2020 (and the accompanying crazy dance number), and some which were out of nowhere, like Gods & Monsters by the Assassin’s Creed Odyssey team. It looks like a mix of Zelda or Xenoblade, but nothing at all in the way of gameplay. The odd surprise, which was leaked last week, was a Roller Derby PVP Co-Op game.

Of course, this is Ubisoft, so they couldn’t go on with the high of Watch Dogs: Legion and a bunch of Tom Clancy games. They had to come in and crap all over everything. It started with a rather dull looking “crossover” mobile game. I get that mobile gaming is a big market, but the traditional gamer market, which E3 is aimed at,Â does not careÂ about mobile. There wasn’t any hype to be had here, so it mostly felt like a dud.

That wasn’t the worst, though… that has got to be Uplay+. Because in the modern industry everyone has to chase the same idea in hopes of making all the money, we get another gaming streaming service from a publisher. I understand it with the platform holders… Xbox can add value by bundling it with Xbox Live, their first-party titles, and PC. Playstation can tap into a massive back catalog, and Nintendo – okay, Nintendo could crush it but frustratingly doesn’t and just drips out a few NES titles a month.

Ubisoft came out to pitch this and then dropped an insane price point of $15/month, for 100+ titles on PC, and the only confirmed platform outside of that is Stadia (which also requires a subscription). For contrast, EA Access, which also isn’t worth it, is only $5 for 50+ games, and mostly gives early access to titles you purchase. I cannot come up with a single reason to pay for this service, especially at that price. There aren’t enough games coming out to justify it or integration to make it worthwhile.

Honestly, Watch Dogs: Legion was the absolute highlight of this conference to me, but the rest of it was mostly a wash. The subscription service looks to be about as useful as Uplay is (read, completely pointless), and I don’t look forward to seeing them paste it all over every game they make. The rest of the games have their audience, but I’m not really among them. There wasn’t a Far Cry or Assassin’s Creed game this year either, so for the most part, it’s wait for March 6th to unleash your granny hacker assassin horde on virtual London.