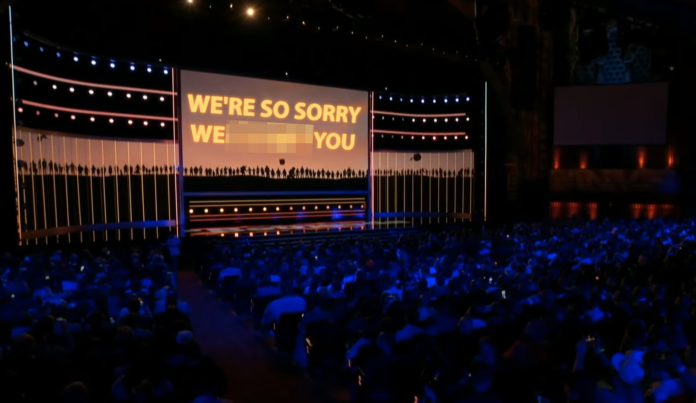 Last year, if I had to sum Bethesdaâ€™s E3 Conference up, I would call it â€œpromisingâ€. They showed a new, multiplayer Fallout game, a sequel to the critically-lauded 2016 DOOM, a sequel to the crazy and over-the-top-in-a-different-way-from-DOOM Wolfenstein, and, of course, confirmed the existence of Starfield and The Elder Scrolls VI. Everyone lost their mind.

But since then, a lot has happened, most of it negative. Rage 2 received mediocre scores. All but two games they revealed at E3 2018 still hasnâ€™t come out. Â Fallout: 76 was released half (if not less) baked, and the negative PR for Bethesdaâ€™s scummy, microtransaction-filled â€œmultiplayer Fallout experienceâ€ has infected everything they do. So for this year, Bethesda, with their Be Together tagline, wants you to call their conference â€œredemptionâ€.

I prefer to call it â€œemptyâ€.

Several times, including bookending the conference, you had these overly mushy â€œwe are all gamersâ€ â€œthe community is so greatâ€ â€œthese are the people behind the gamesâ€. You couldnâ€™t miss what they were doing. They wanted to make us feel bad for criticizing inherently people. Criticizing them for releasing an unfinished game at full price. Finally, after 10 years, making them face the fact that their games are buggy messes. And, undoubtedly, to try to swerve around some of the criticism that would spawn about what they did at the conference.

Am I a bad person for criticizing Bethesda as a company and game studio? I donâ€™t think so. Does it have any bearing on the individuals behind the games? No. Even if one person made the decision to release Fallout: 76 as it was, Iâ€™m sure there were so many other factors involved than â€œscrew the fansâ€. I think itâ€™s important to remember that, no matter what they show, they are still a company. Their goal is to make money. That doesnâ€™t make them inherently bad; itâ€™s more so how they make money where the issues crop up.

Having said all of that, I am not the biggest Bethesda fan. I donâ€™t really enjoy most of their games. After watching this conference, I can say that opinion remains the same.

But letâ€™s talk about what they showed.

A staggering amount of the â€œgamesâ€ revealed were mobile games or DLC / Expansions for pre-existing games. Iâ€™ve never really felt like these are E3 material. Bethesda disagrees.

The Elder Scrolls: Blades, a game Iâ€™ve heard is riddled with timers and microtransactions, came to Switch last night.

The Elder Scrolls: Legends, a game that looks like a rip off of Hearthstone, released an expansion called Moons of Eslweyr.

A new (not that anyone was begging for one) Commander Keen mobile game that looks just…horrible…was announced. No offense to the team behind this, but when people are literally screaming in joy for an ES:O expansion, showing them a Commander Keen reboot next is underwhelming at best, embarrassing at worst.

In addition, Bethesda showed off Orion, a cloud service like Stadia or Microsoftâ€™s announced xCloud. Apparently Orion uses 40 percent less bandwith, frame encoding time by 30 percent, and computing work by 20 percent. And how does it do all this, you ask? Donâ€™t worry, Bethesda did not clarify. They did, however, bring out a woman with her head down, playing DOOM 2016 on her – wait for it – phone, pulled a camera on her, and showed that there was no lag, 60 fps, perfect gameplay. Now, was this real? Because companies at E3 have been known for, uh, letâ€™s say exaggerating things. Either way, they announced it and moved on.

According to Wikipedia, while the origins of the first person shooter began in the 70s, they became available for a more widespread release with MIDI Maze in â€˜87. Even ID Software, who would later create DOOM, released Hovertank 3D, which put in place the raycasting technology later popularized by the more popular games. Maybe thatâ€™s what Bethesda meant – they made the first really popular first person shooter in Wolfenstein 3D. But thatâ€™s not what they said.

Now, Fallout 4 lets plays use mods on consoles. That is true. But yet again, they werenâ€™t the first. Unreal Tournament 3 had mods in 2007 on Playstation 3. Did they popularize mods on console? Sure. UT3â€™s mods didnâ€™t really catch on, due to, from Epic Gameâ€™s Stacey Conley, the newness of modding on console and the iron-fisting on console developers. But, itâ€™s been a while since then, and so weâ€™re ready for the new mods.

And, finally, in no way did Bethesda create the first VR headset. I wonâ€™t get into the history of this, because itâ€™s lengthy, but check out this vrs.org article on the history of VR. Itâ€™s by no means a new phenomenon.

Anyway, back to the games.

Several DLC / expansions were announced, including one for the infamous Fallout: 76. Itâ€™s called Wastelanders, and adds NPCs, new quest lines, and dialogue options to the game. Stuff that should have been in there from the beginning. Iâ€™m by no means passionate about it like certain staff members on the site, but releasing a game without Fallout staples, a half-finished, bug-riddled mess, then, a year later, revealing things that should have been there from the beginning is extremely scummy. It reminds me of the No Manâ€™s Sky situation. A $60 game at launch (which I bought) that was empty and soulless, that then, over the course of the next few years, evolved into a full game. This tactic should never ever be done, yet you see it in a disappointingly increasing amount. When the player buys the game, theyâ€™re so put out by the lack of features, that when the features are finally revealed, they appreciate the game developed and say â€œoh, they listened!â€ No, they didnâ€™t. They ignored you, made you desperate, and accepted your unwarranted thanks afterwards.

Likewise, theyâ€™re adding a Battle Royale mode called Nuclear Winter. Because why not. Every other game is doing it.

An expansion for Rage 2 called Rise of the Ghosts, if thatâ€™s your thing. I havenâ€™t heard much about Rage 2, and what I have heard is somewhat mediocre.

And a nice CGI trailer for the Elsweyr expansion for The Elder Scrolls Online. Wow, Dragons!

Now, for the actual full on games. You know, the reason I watch E3 in the first place.

Ghostwire Tokyo. It’s like a post-Infinity War world. You play as a person with a bow. No gameplay revealed, but the psychedelic trailer introduced an interesting concept, if nothing else.

Two Wolfenstein game: Wolfenstein: Cyberpilot, a VR game, and Wolfenstein: Youngblood, which has already been revealed, but we got to see more footage. 2014â€™s Wolfenstein: The New Order remains one of the most mechanically realized games Iâ€™ve ever played combined with incredibly tight level design. The New Colossus was less so, but still a good time. I see no reason for Youngblood to change that.

Deathloop, by the studio behind Dishonored, looks weird. Two assassins constantly fighting and killing each other. No detail on any gameplay, but these guys know how to make good games.

And the crown jewel of Bethesdaâ€™s E3 lineup was DOOM: Eternal. Expanded movement, including parkour and new ways of killing, so the game will be even crazier and more fluid than the 2016 release. I did start to get a headache watching the gameplay trailer, though Iâ€™m sure actually playing the game wonâ€™t have that effect, at least not until a few hours of play.

They also announced Battlemode, where three players divvy up between two demons and the doomslayer and fight to the death. It reminds me of 2015â€™s Evolve which, while not great, had an extremely solid concept. If ID does one thing right, itâ€™s gameplay, so Battlemode is a safe bet.

But that was it. Nothing about Starbound or Elder Scrolls VI except for a brief mention by Todd Howard.

It seems kinda…sad that an E3 conference can exist with this much DLC and mobile game focus. Is that where the market is going? Making people pay extra for a full-priced, half-baked game? Or releasing another mobile game that no one wanted. You guys have phones, right? A free game doesnâ€™t make a good game. Nor does overhauling and updating an incomplete game wash away the original sins.

For my money, the only two games Iâ€™m interested in have little to do with Bethesda themselves. Deathloop and Ghostwire Tokyo, with these (assumedly) single player-focused, interesting-concept worlds. The more complete and the less interference in a game once I buy it, the better I feel.

Let me show you some numbers quickly.

Of those four games, only two showed actually gameplay footage. Deathloop and Ghostwire Tokyo, regardless of cool concepts, had nothing but pre-rendered CGI trailers.