Gearbox/2k has been teasing for a few weeks that something Borderlands was coming soon, and earlier in the week it was reliably leaked that it would be Borderlands 3. Today, they finally made it official, and released one hell of a reveal trailer.

For those who haven’t played it, Borderlands is a first person Single/Co-Op looter shooter that did the model right before a lot of the more modern iterations like Destiny, the Division, etc. came and made it all MMO-y and overly grindy.

The original game was stylistically fantastic, and introduced the world to Cage the Elephant”‘s Ain’t No Rest for the Wicked… as a game it was fairly fantastic, even if it’s a little rough by modern standards. The sequel gave us one of the great video game antagonists in recent memory, and perfected the drop-in Co-Op that defines the game. We see here all of those same things in play, some more characters, and even more favorites coming up.

More will be revealed next week, during Pax East, and they’ve already mentioned that a remaster of the original game is coming along (joining the remaster for 2 and the “Handsome Jack Collection” that happened recently). While they haven’t been confirmed yet, there’s been a long-standing rumor that the original games may be headed to Nintendo Switch, where they would actually work pretty well… so I look forward to learning more. 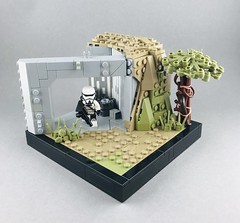