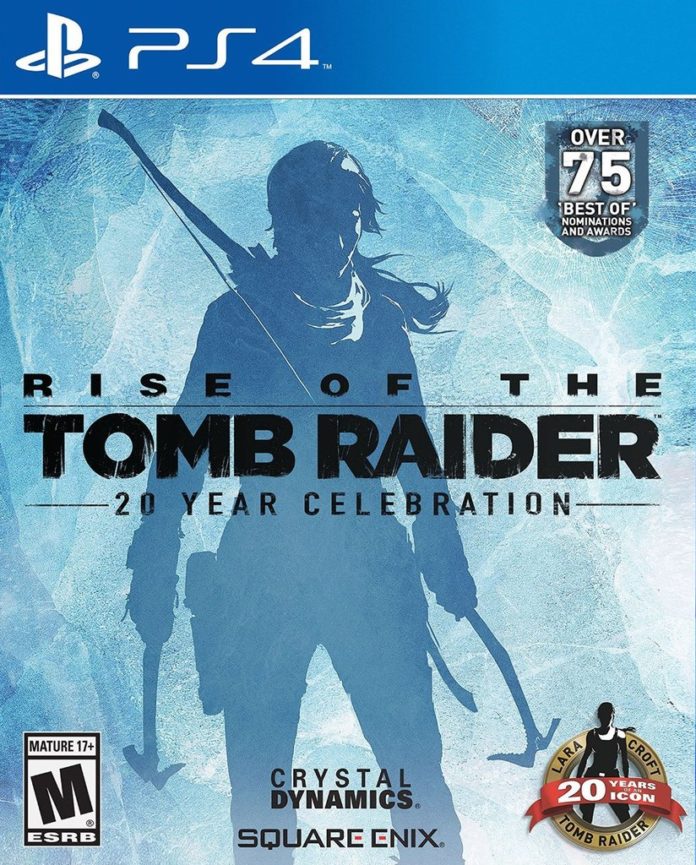 Yes, I’m calling this The Tomb Raider Post but there’s way more to it than that. I finished the Rise of the Tomb Raider. I straight up burned through this game for the past couple of weeks right after I finished The Last Of Us. It’s kind of a big deal for me because it’s way too easy to start a game, get bored or find some other game to start playing and then never finish and never go back. I’m pretty sure I have some sort of ADD. I’ve never been professionally diagnosed, but I’m pretty sure that’s what I have along with an tendency for addiction.

Does the phrase “backlog of games” mean anything to anyone else? Pretty sure I’m not alone in this. That occurrence, the accumulation of games and not getting around to playing them, aka “the backlog”, has a lot of parallels with my LEGO purchasing habits. It’s the accumulation of stuff. It’s a hard habit to break. Because the intent is always good. For LEGO it’s “use it for the parts” or “it’s on sale” or “my kids could eventually play with it” or some other justification that isn’t really a good reason. Reselling never really crossed my mind even though I’ve done that a few times, it was never one of my many go-to excuses for amassing piles of LEGO sets. 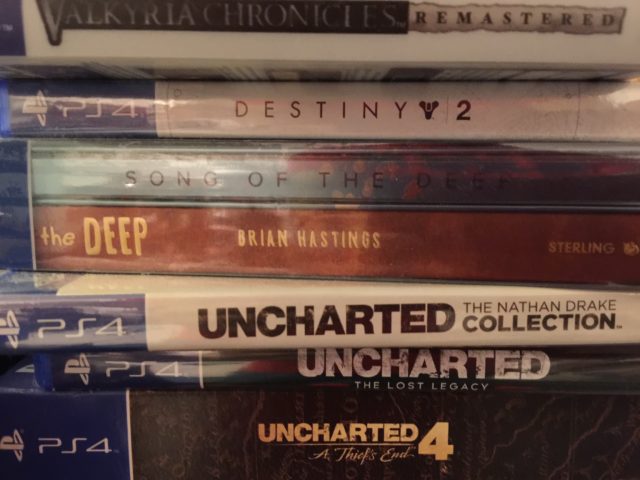 For video games, it’s usually because “it’s a good game”. And really that’s about it. I finished Tomb Raider and my friend asked me what I’ll play next. I didn’t know how to answer because where do I even start? How do I decide what next game is deserving of the time and effort? The pile of games I started and haven’t finished or haven’t even started yet include Horizon Zero Dawn: Complete Edition, Nier: Automata, Super Mario Odyssey, The Legend of Zelda: Breath of the Wild, Pokemon Ultra Sun/Ultra Moon, the Uncharted series, Metroid: Samus Returns, and a ton more. And my usual, old way of gaming was to start a game and try and finish before the next new, shiny game came out, fail at doing that, completely stop playing the first game, and then start the new one. Rinse and repeat.

It’s a habit i’m trying to break. In fact up until late last year, I was accumulating games but not really playing them. So I made a conscious decision to actually start playing. That was another sort of breakthrough moment. You ever feel so overwhelmed by something, you get paralyzed and don’t know how to start a task? That’s how I felt when it came to my backlog of games. Which game do I start? How do I pick.

So that conscious decision I made? I used the then-newly dropped trailer for The Last Of Us sequel as my starting point and just fired it up and played through that. Then when I finished that game, I looked at my pile and felt that paralysis again. I said eff that and just picked up Tomb Raider for no other reason than seeing the trailer for the movie at the theater.

Like I said, this post is not just about Tomb Raider. It’s really about this self-imposed mental prison that I put myself into. I honestly had no intention of writing this post the way it turned out, but that’s just how my brain is flowing tonight. I really did have every intention of just writing about Tomb Raider, how I finished the game, the trailer for the movie and how long that chick’s neck is, and how I ordered a physical copy of Tomb Raider: Definitive Edition when I completely forgot I had a digital copy sitting in my library. That right there is another by-product of the hoarding mentality: forgetting you already had something.

So to bring this back to what I originally wanted to write about, Rise of the Tomb Raider was a GREAT game. I might have mentioned this previously, but my only complaint was that there seemed to be a stronger emphasis on combat and defeating the bad guys than there was about exploration, puzzle-solving, and discovery. I was chatting with my friend and he said his favorite game was the Far Cry series because there’s a main story line, and side missions if you want to take a break, and item crafting. And it dawned on me that there are probably a ton of other games just like Far Cry and Rise that follow the same type of game formula. I’m pretty sure Horizon Zero Dawn is the same way. The Last Of Us had the same crafting mechanics but no side missions. I suppose it’s just a matter of time before I get tired of the same formula. But for now, I’m looking forward to playing Definitive Edition and possibly picking it as my next game.

Also, related to the topic, there is a Tomb Raider moving coming out on March 16th of this year. Alicia Vikander is playing the lead role but I wish Kate Beckinsale was playing the part though. I’ll still try and go see it. But one other thing related to the movie that I wanted to bring up, was this terribad photoshop job of the movie poster: 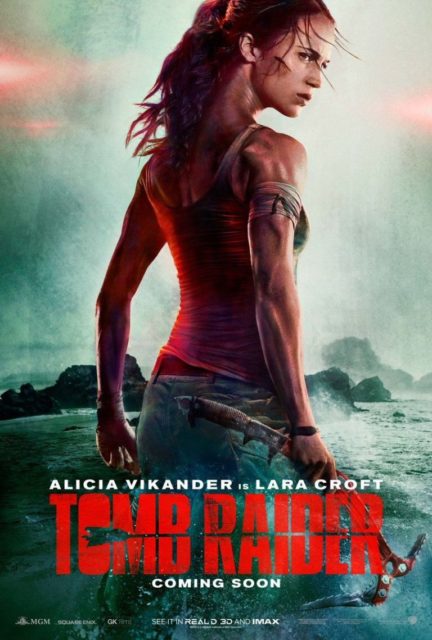 That neck is laughably bad and whoever approved this should get a slap on the wrist. As if women in Hollywood didn’t already have impossible standards to live up to. At this point, they’d have to cast Taun We for a stunt double or something. Someone on the internet tried to correct it, and I think this one looks WAY better: 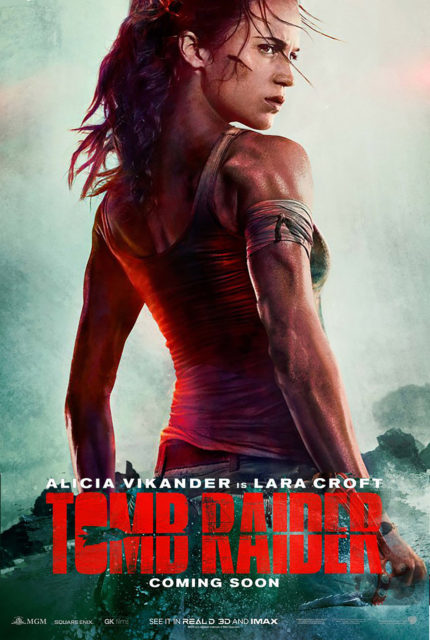 Her head is still too big, but waaaay better than the official version.

Going back to the game, I’m done with the main story. There are a couple of trophies I still want to try and get and maybe play through some of the DLC. This wasn’t meant to be a review post, but if I had to give it a score, I’d have to give it a 4 out of 5 stars. Square Enix and Crystal Dynamics put a ton of polish into rebooting the franchise. Their efforts definitely pay off as Rise is a stellar game on all fronts: voice acting, motion capture, FMV sequences, everything. Transitions between FMV and in-game video were barely noticeable, more than once did I find myself staring at the screen not realizing it was my turn to take control. The story, crafted byÂ Rhianna Pratchett, is engaging throughout from beginning to end. It does lose a star for being more action oriented but that is my own personal bias. Aside from that my only other complaint was the post-credits ending sequence. It felt a bit disjointed and out of place and it was obvious it was thrown in to lead into a sequel. Everything up to that, though, was a ride worth getting on. The PS4 version has all of the DLC included which offers more replay options and game types with an additional set of trophies for you trophy hunters out there. A great game worth picking up. 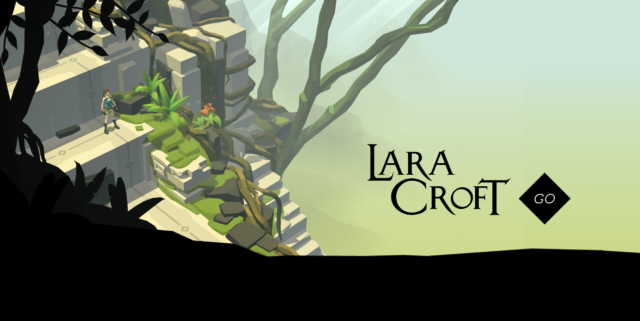 To scratch my puzzle-solving itch involving Lara Croft, I started replaying Lara Croft GO (iOS | Android). It’s definitely worth the $5 I paid for it on my iPhone. Google Play has it on sale right now for just 99 cents. Seems like there’s some new DLC levels judging from some of the screen shots over at the official Lara Croft GO website. I’m not into playing games on my phone, not anymore anyway, but this one’s worth breaking the rule. 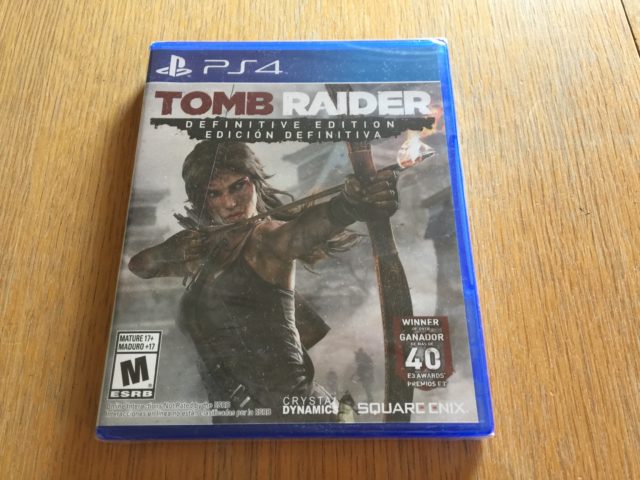 Anyways, if you’ve read this far, I want to thank you for indulging me and offer a giveaway of my hard copy of Tomb Raider Definitive Edition for the PS4, the one I ordered but forgot I had a digital copy of already in my library. So shoot me an email at giveaways@fbtb.net with all the necessary info and the subject line of LARACROFT. Check out the standard giveaway rules for what you need to send me to be eligible. Entry period is open from now until 11:59pm PST Sunday January 14th, 2018.