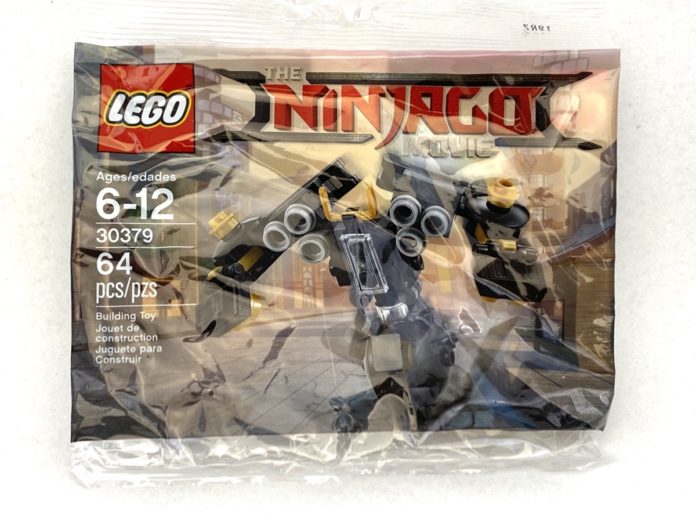 Out of all the memorable sets that came out of The LEGO Ninjago Movie, Cole’s Quake Mech has got to be one of my favorite ones. The second I laid eyes on the Segway-inspired mech, I was hooked. I may have squealed a bit when I pulled out this polybag, 30379 Quake Mech for today’s review, that’s how much I love it. It is basically a unicycle mech and if those two words combined together doesn’t make you chuckle you just might be dead inside. 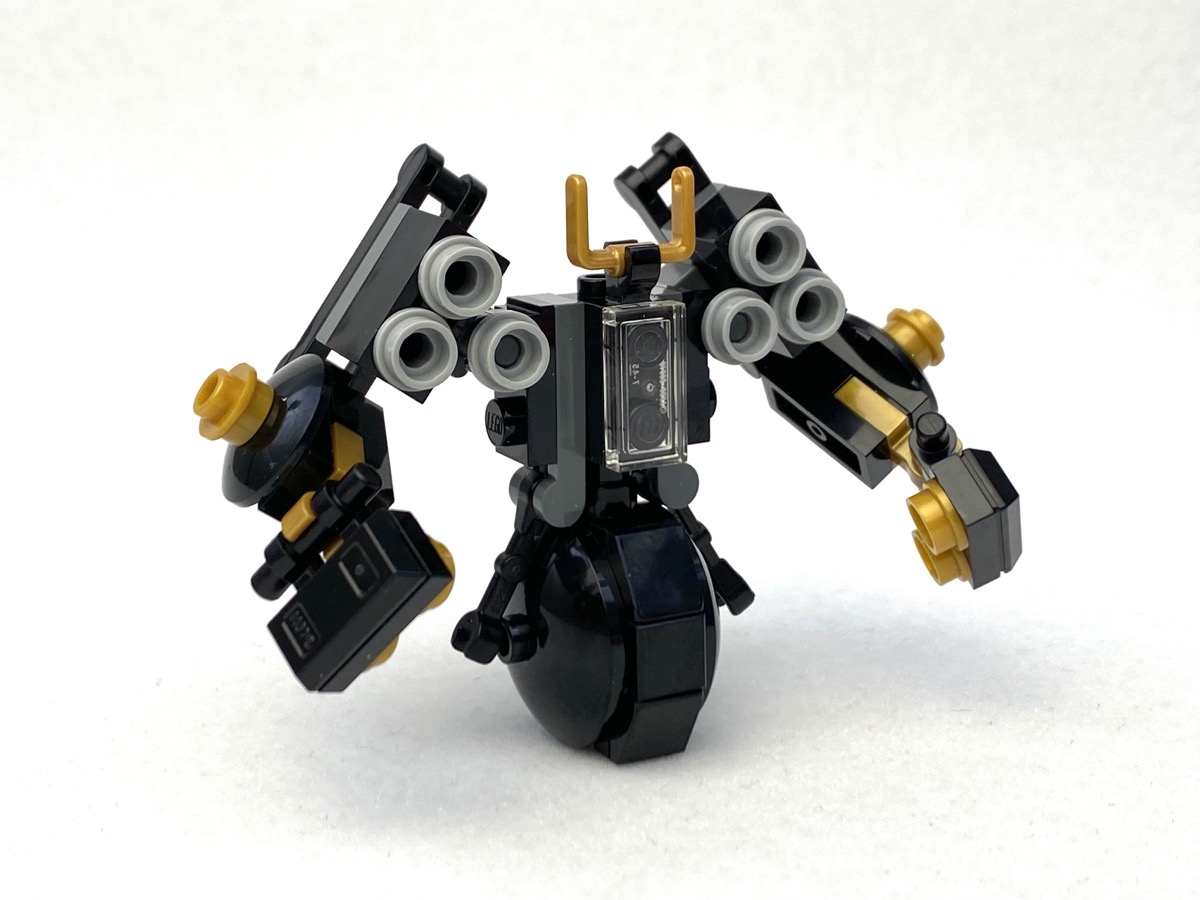 Now obviously, it being a unicycle, there’s going to be a balance issue. There’s no motor or computer to keep the thing upright like a Segway. The System-scale set worked around this by building in a kickstand in the back which was pretty smart. It was discrete and didn’t draw your attention. The mini set does something different to get around the balance issue. 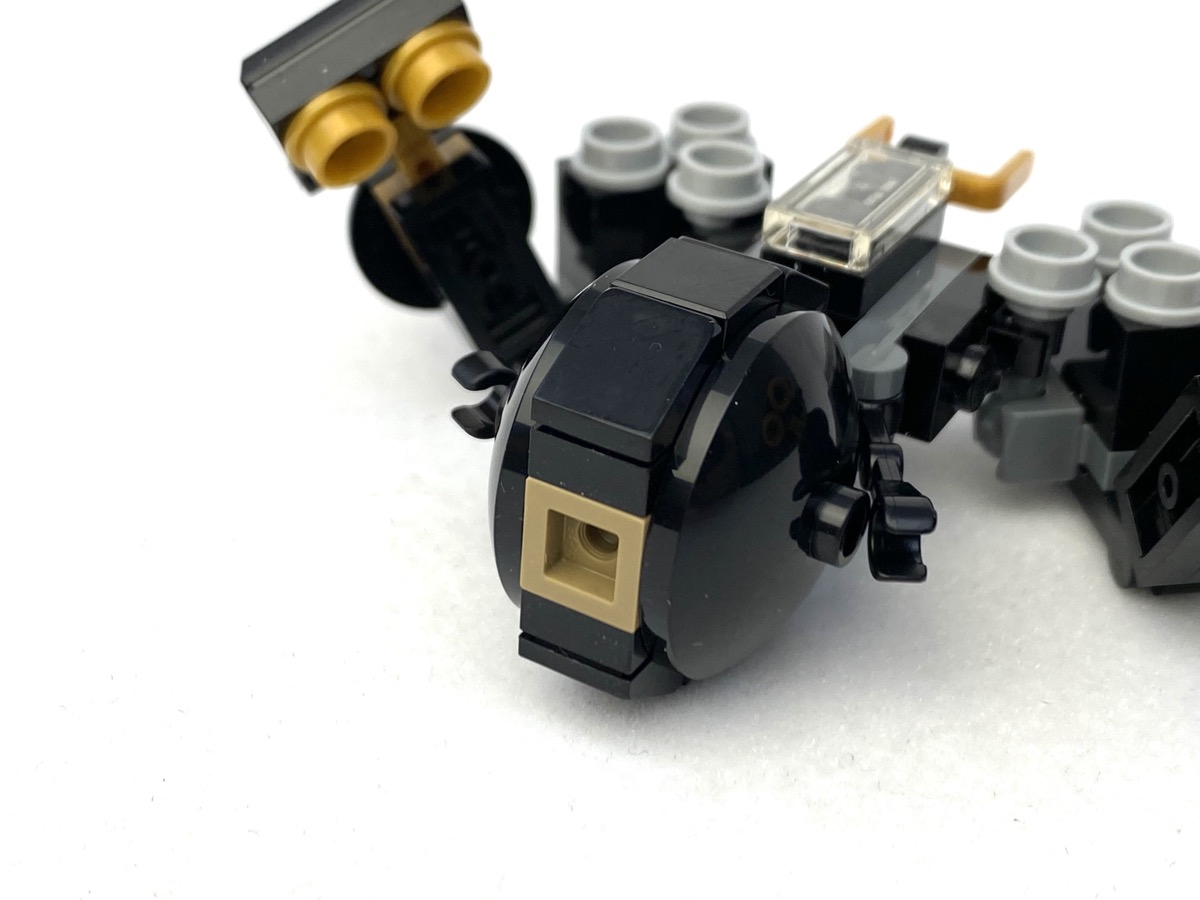 Two 3×3 black dishes sandwich a brick-built tire that is flat on the bottom. The illusion works perfectly! Two robot arms sort of just sit on top to look like a fork and while they’re unattached to the dish, it’s not really an issue because your fingers will naturally grab the mech at its waist keeping the robot arms as flush as possible against the wheel. 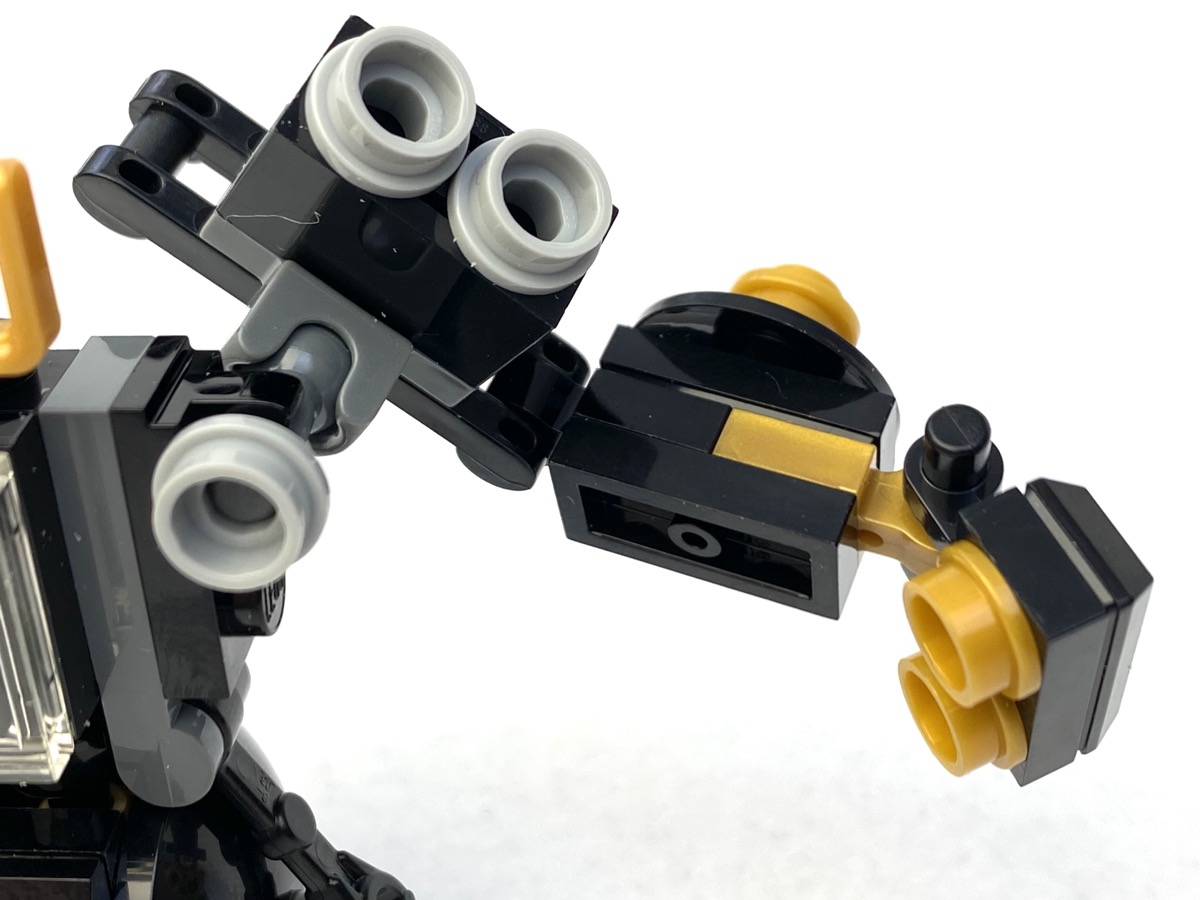 For being a mini build, the arms are quite articulated. There’s a pseudo ball joint at the shoulder. I say pseudo because while there is a ball joint, it’s range of motion is quite limited compared to what a ball join should be. You can swing the arm back, but there’s no way to have it swing forward. There’s also articulation at the elbow and the wrist. 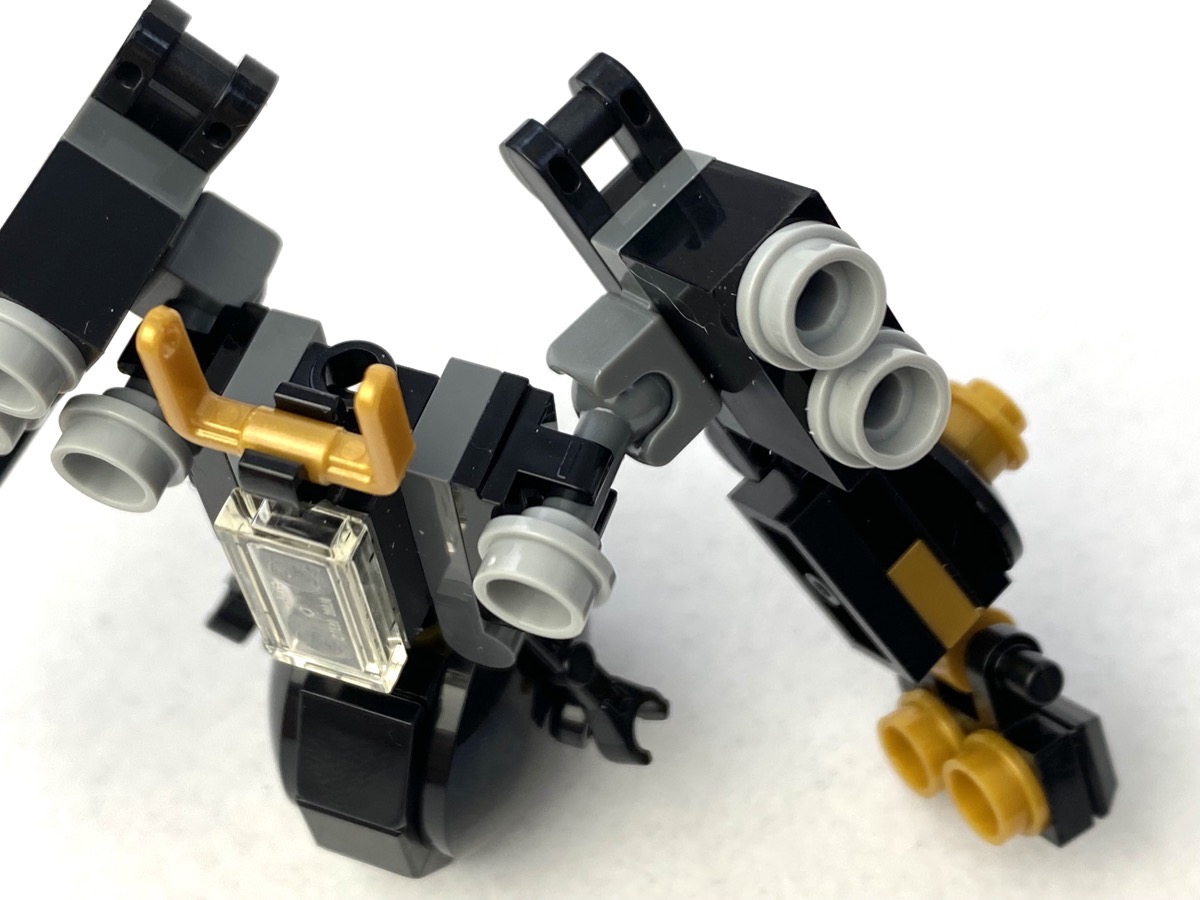 I’m always fascinated on how joints can be made for LEGO mechs and the shoulders on this mini build was a learning experience. The bar with tow ball does double duty not only as the joint connection but also the connection point for the 1×1 round “speaker” that Cole’s Quake Mech uses to pump out the jams. I’m not sure how the bar with tow ball could have been connected better to give a better range of motion and still provide a connection point for the grey 1×1 speaker round plate. If there is a solution it probably would have increased the size of the overall build. That’s not something I think is totally necessary because as it is now, I think this model is perfect. 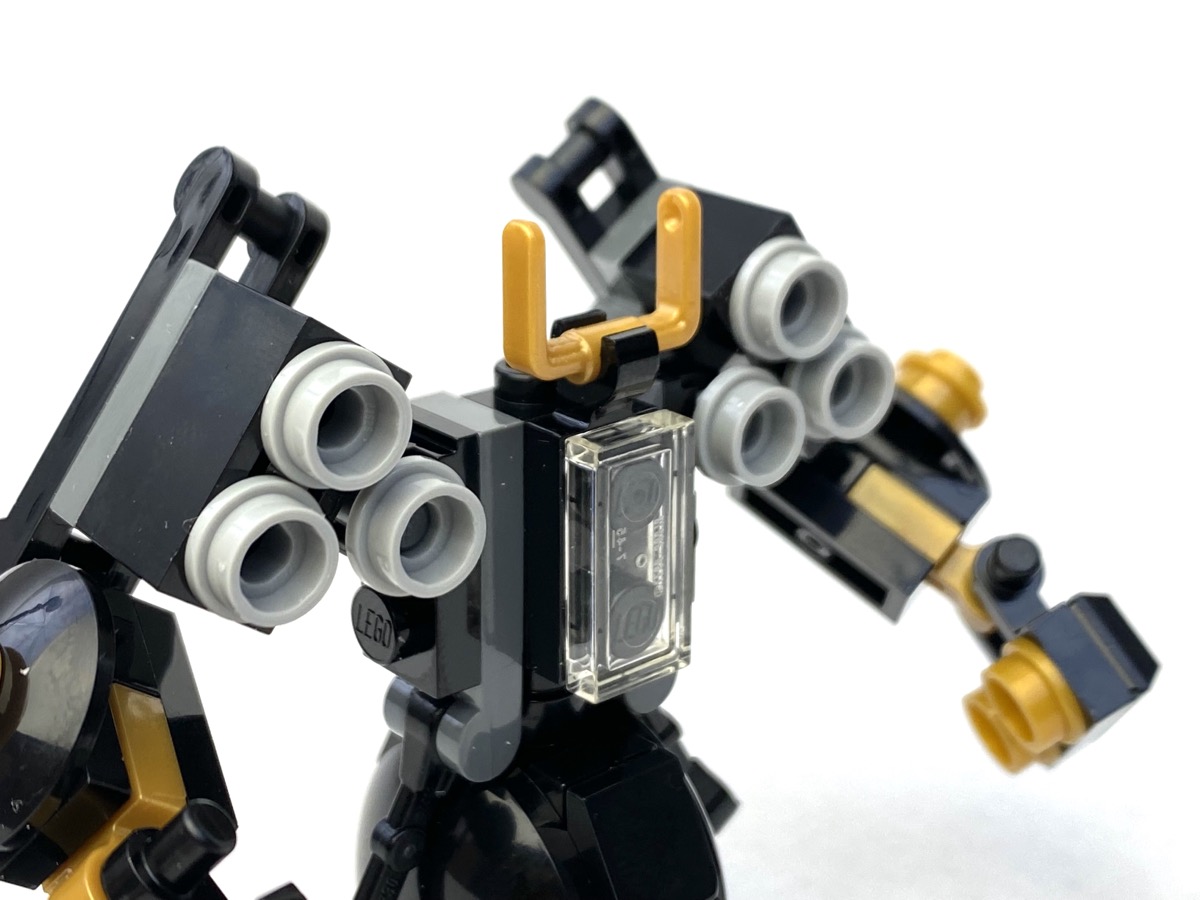 Well, almost perfect. The only things missing are his yellow battle standards that attach to the backs of the shoulders. A simple 1×1 yellow plate with clip might have sufficed, and serendipitously enough, there is already an attachment point for said clips. Really that’s the only thing that could possibly make this diamond of a set shine a bit brighter.

If you haven’t guessed it by now, this set rocks! For its size, Cole’s mini unicycle Quake Mech is very well articulated in the arms. The brick-built tire cleverly uses two dishes that mask the brick-built tire and make it look nice and round. And the arms are more articulated than some of LEGO’s larger mech sets. I own the bigger System-scale set, 70632 Quake Mech, but, sadly, like most everything else in my collection it remains unbuilt. I fully intend on building it and now that this polybag review is done, I may go dig it out and do such a thing.