Fact: it’s impossible to build this and not keep singing War’s Low Rider to yourself. FACT. Beyond that, if you’ve seen suicide squad, it’s impossible to see exactly how deep the cut is with this set. In $49.99 and 433 pieces we get a better Joker and car than that movie could ever provide. It also seems to have more purple than every other set I’ve ever purchased… I think only the Harry Potter double-decker bus could potentially come close.

Of all the LEGO Movie sets, this one wasn’t on my radar at all. I’m sure I saw it in the previews, but I had all the figures in some form, and the Batgirl figure wasn’t close enough to the costume I like the most (post-35 N52 that was dark purple and absurdly practical)… it was good, but not enough over the version that was in Joker Steamroller set. More than that, it did smack of the whole Suicide Squad look, and Joker was by far the worst part of that film (Harley was the best, but not enough to cancel it out).

After building it, though, I’ll admit that I was wrong to ignore it, and connect it to suicide squad over just sticking to the weird spirit of old school Batman. Touches like the horn, the chicken, and the stereo system you can’t see have more character thanÂ I was expecting… and the most recent LEGO Batman trailer made it very clear what sort of Joker they were going for in the movie. By the time I was building 70906 The Joker Notorious Lowrider, I was excited to review it, and along with the Batmobile… may be my favorite of the stuff I’ve built thus far. And I have to thank LEGO for sending it over, because I probably would have ignored it otherwise.

With the announcement today that Billy Dee Williams is going to give us the Two-Face we always deserved (Tommy Lee Jones is a fine actor, but we had two movies of setup forÂ Lando-Face), the only real sadness I have is that Mark Hamill isn’t doing the Joker’s voice. I think, at this point, I think of him equally as Joker and Luke Skywalker. I think Zach GalifianakisÂ will do fine, but it would have been awesome to hear the Joker-Hamill again. 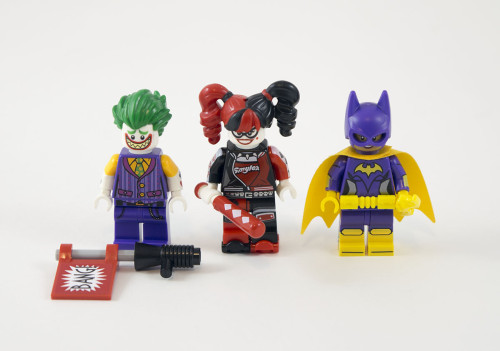 We only get three minifigures in the set, which seems a bit light for a $50 set. However, all three figures are unique to the set and pretty drastic variations over previous figures. We get the movie version of the Joker and Harley Quinn, and what I assume is the movie version of Batgirl, though she hasn’t been seen in any of the trailers or teasers yet. 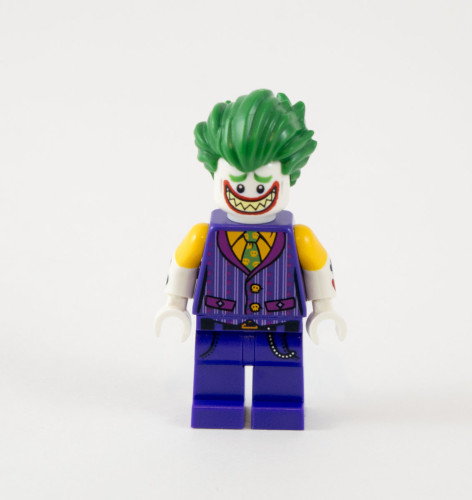 I want to make the jokeÂ that “Joker has been played by three actors and one shrub named Jared Leto in the live action movies,” but instead I’m going to go with “this minifigure looks better than Jared Leto’s joker and is far more convincing in the part.” I think it works, because look at this guy. As a figure, it’s worth it for that smile alone. That’s the sort of thing that fits both LEGO and the exaggeration that the character deserves. 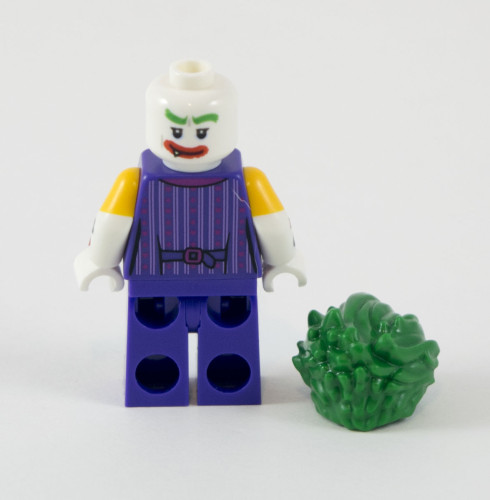 Also, apparently he has fangs now. The suit is also just fantastic, and does hit a good mix of the modern joker and older style mix. The eyebrows, that awesome new hair, and the purple suit all just work. This guy will replace the older versions in my displays (I’ve never gotten around to buying Ledger Joker, but that one would be a close second to this). 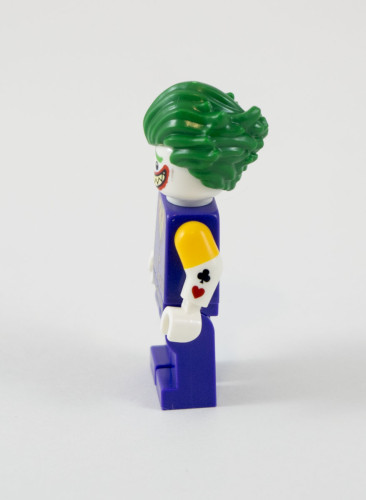 The coolest little feature has got to be the two-tone printed arms that have card suit symbols on them. The other arm features diamonds and spades, and I kind of want to figure out another use for the arms. Probably some space marine application. If only I knew someone who owned a few hundred of those dang things to toy with… 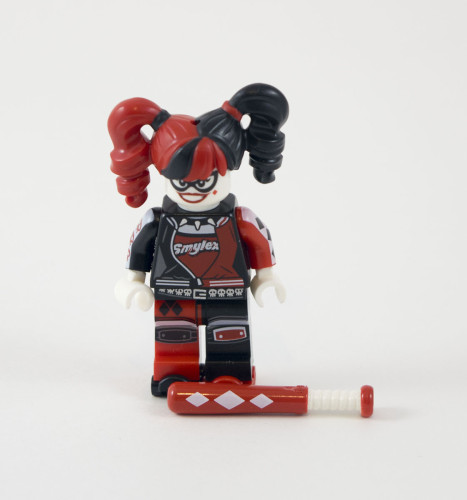 I’m certain that I realized that the Harley Quinn that came in this set had a special hairpiece, but when I built it… that just may be the best minifigure hairpiece ever. I’m not sure if it’s shown up elsewhere, but it’s Harley’s now. No one gets it. Add to that the custom bat, outfit and skates, and you have an absolutely perfect Harley Quinn figure. Sure, it’s easy to love the old Jester outfit, but this is just a fantastic mix on the various outfits to make something unique (at least as far as I understand the character) It’s closest to the n52 Suicide Squad mashed up with roller derby, but is certainly more modest for the LEGO audience. Somehow, though, that makes it even better. 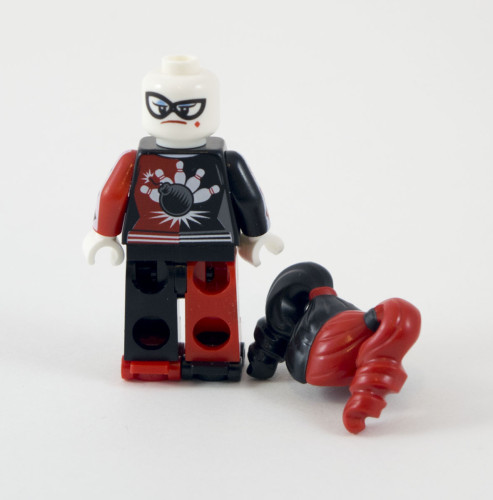 The alt face is as awesome as the hair, really. That’s the look of Dr. Quinzel looking with disdain. The bowling jacket on top of it somehow just adds as well, and strikes me as something she would wear. Seriously, this is in the competition for one of my favorite minifigures ever. It’s a great mix of a character I like and LEGO style. 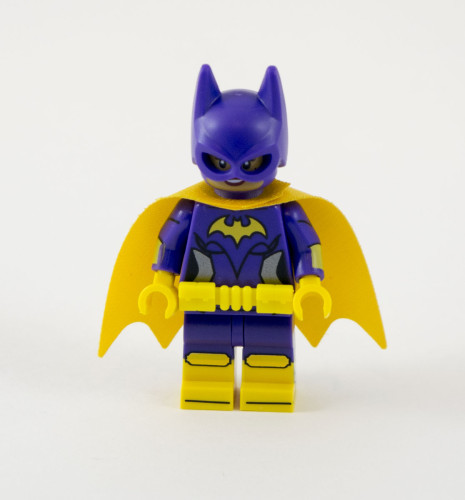 If you missed Batgirl in the steamroller set (and who can blame you for that), this is your best opportunity to get it before the next wave of sets. It’s not a bad costume, and certainly derived from the N52 version and made lighter. I love that she’s got a utility belt, which has been even more part of her character than it has Batman in recent years (well, until Convergence, since she’s now wheelchair bound and the Oracle again). 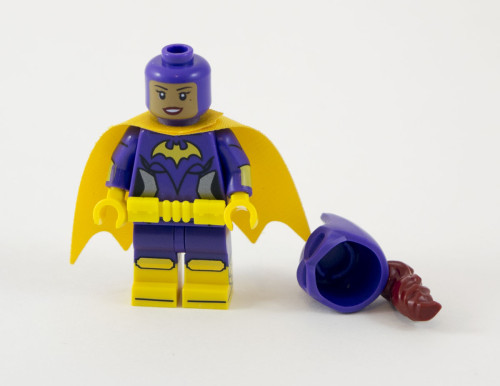 I’m curious to see how they work her into the costume compared to being Commissioner Gordon in the movie (and also wondering how her dad will fit in). It’s not a bad move, and I’m glad that they’re putting Barbra front-and-center in the LEGO movie universe. NowÂ I just need that Dimensions expansion that features her and Robin; is it weird that I want the LEGO Movie Batman as a character as well, so I can have two Batmans running around with Batgirl and Robin? 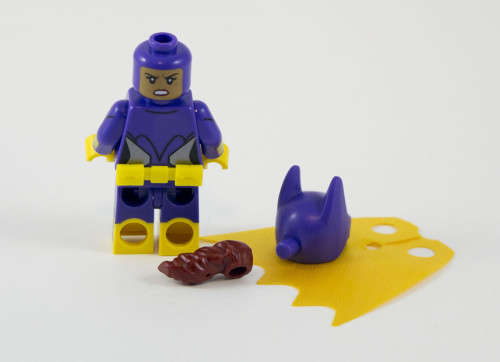 The big surprise I found with this figure is that the ponytail isn’t attached. We get a lightsaber-bar sized pin on the back of her cowl, and the ponytail fits on it so it can move. That’s an absolute genius addition to the minifigure world, and I love it so much more than the normal full-print helmets we usually get.

This has to be one of the weirdest builds that I’ve seen in awhile. It’s a pretty old-school build style, with a bottom-to-top brick build that really makes it a solid rectangle of purple. Yet, somehow, it really works in a set that’s supposed to be an old car that’s been tricked out. I don’t know if it was intentional, but it’s certainly appreciated.

The strange thing about the build is that you build out the bottom of the chassis, including the suspension, very early, but don’t attach the rubber bands that have it popping up and down until the very end. There was obviously some play feature there, but I had no idea what it was until the parts finally came up in the last bag. 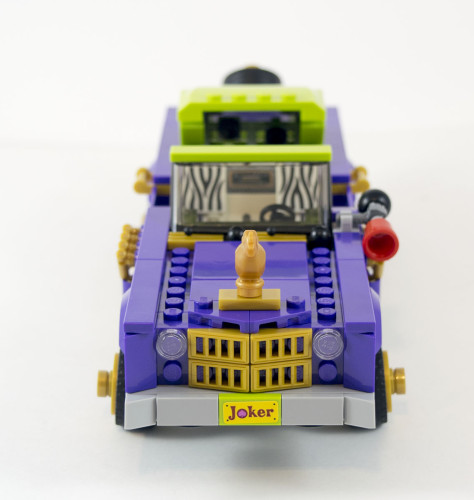 This set does have the notable distinction of being the least-stickered set in the LEGO Batman lineup so far. The license plates and the radio slope are stickered, but the zebra seats are printed. You also have to love the addition of the gold chicken to the front of this set

The interior is channeling a bit of Batman, since the back of it does have a stereo system worthy of the TAKOS. It’s weird that the panel is in the back, but I suppose that’s the sort of sacrifice you make for a big woofer. You also have to love that little brick-built horn that’s on the side (and I wonder what sort of horn jingle the Joker would use… probably Jingle Bells, given the season). 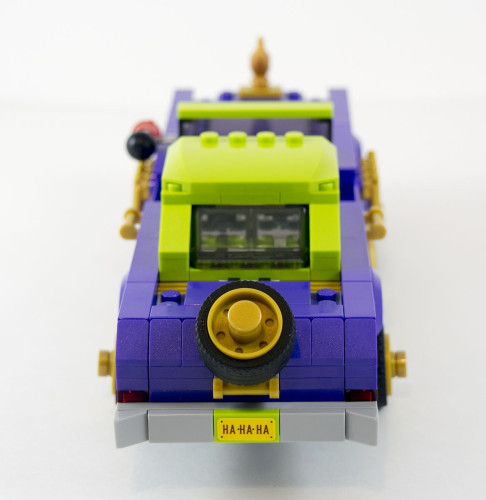 The stereo portion of also incorporates into the rest of the set, since pressing down on the techinc pins / woofers are what fire the spring launchers that are in the trunk. I neglected opening it for a picture, but there are a pair of launchers in there. It was a pretty creative way of hiding that feature, and it feels very Joker to put rockets on the back of the car.

Like I mentioned earlier, the low rider features are handled by a pair of long rubber bands placed between each side of wheels, making four total. It works… kind of, but I find that the tension is somewhat too tight with two, but too loose with one. I’m not sure how you fix the issue here, but it makes it so putting the low rider “low” is very touchy. It doesn’t take much at all for it to pop up into the raised position.

This is a weird set to pin down. On its surface, there are some problems, like the boxy shape or the fact that it tends to pop up to the raised state far too easily. But it’s hard to convey in pictures just how fun the set feels even in spite of that. It fits the character and it just looks nice when placed next to the Batmobile. More than any of the goofy vehicles that the Joker has gotten in various sets, this one just fits him. There’s something to be said beyond part count and price mixture when a set is justÂ plain fun. This set is just plain fun, and when you mix in the the outstanding Joker and Harley Quinn figures and the very good Batgirl figure, I’m going to just call this a five out of five. I’d love it being a bit less or with another figure… but even at $49.99 it’s a fun set to build and play with.

Verdict: 5 out of 5 (I know, I’m surprised I had two of these in me too). You can buy 70906 The Joker Notorious Lowrider right now at Shop@Home to tide you over until the movie comes out in February. 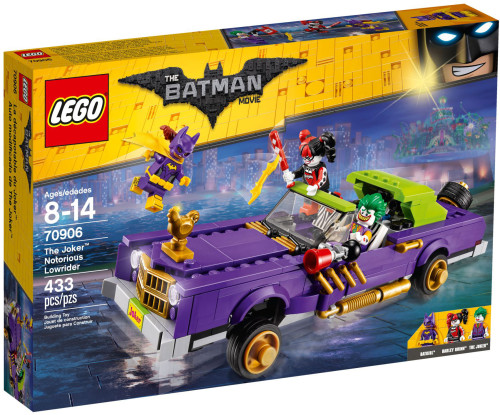