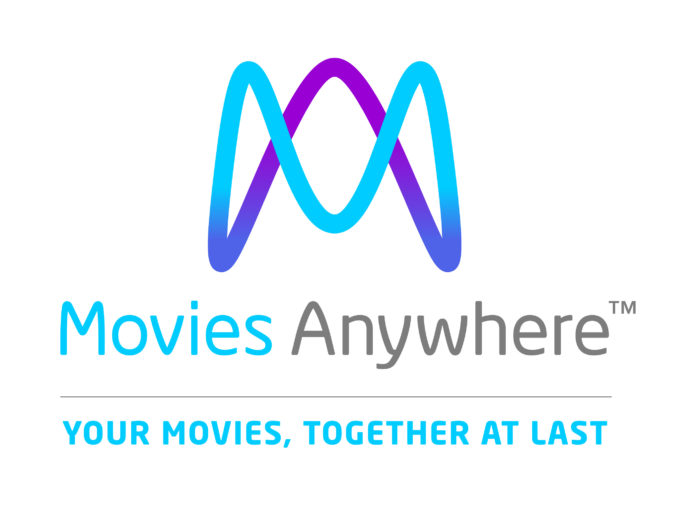 Disney got it right and I’m glad other movie studios are getting on board. I’m talking about digital rights management for movies. See, I’m an iTunes guy, so when I buy a Blu-ray that includes a digital copy, I like downloading a legal digital copy to iTunes. Most of the time anyway; Ultraviolet can go to hell. That was the main reason why I never got a digital copy of The LEGO Batman Movie: Ultraviolet. I started with iTunes for my digital library and planned on sticking with it forever. The prospect of signing up for another service and having my digital library spread out over multiple accounts across different devices and apps was not appealing. Screw that. Who has time to keep track of things like that?

Like I said, Disney got it right. If you ever bought a Disney movie, downloaded a digital copy into iTunes, and had a Disney Movie Rewards account, you may have been prompted to connect your accounts. Doing so would allow you to use the Disney Movies Anywhere service. Meaning, you could stream any of your purchased movies from iTunes or the Disney Movies Anywhere website. And at some point, Amazon Video was hooked into the program too. Disney was making it easy so that you could purchase a Disney movie, and watch it anywhere. And this was fantastic! There have been more than one occasion where I had to entertain the kids on my work laptop away from home and all I had to do was go to the Disney Movies website and start streaming.

Now, more studios are getting on board with Movies Anywhere. It’s the exact same kind of service but with a lot more studios involved. In addition to Disney, you now have access to films from Warner Bros., Sony, Fox, and Universal. The service ties together retailers iTunes, Vudu, Amazon Video, and Google Play. And devices? They got devices: Amazonâ€™s Fire tablets, Fire TV and Fire TV Stick; Android mobile and tablet devices and Android TV, Google Chromecast; Apple, iPhone, iPad, iPod touch, and Apple TV; and finally Roku.

I immediately signed up for the sole purpose of unifying my libraries and FINALLY being able to watch Batman Begins through iTunes. I was gifted a copy of Batman Begins on my Amazon Videos account and would never remember to go over there to watch it. So if all this works, I should see it on my iTunes account. 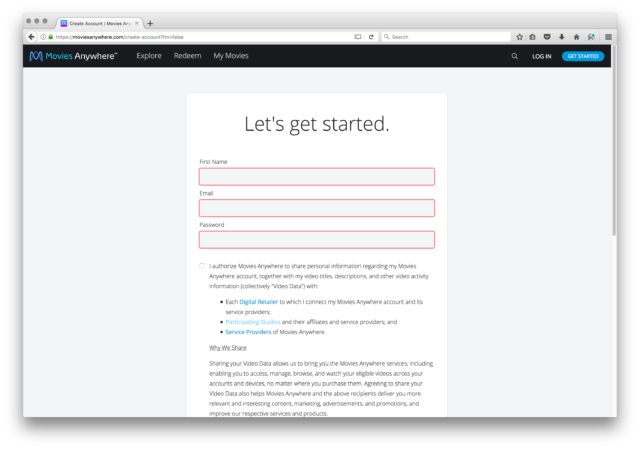 Easy enough. Since the service is spearheaded by Disney, I see all of my Disney purchases on the My Movies page after verifying my email address upon sign-up: 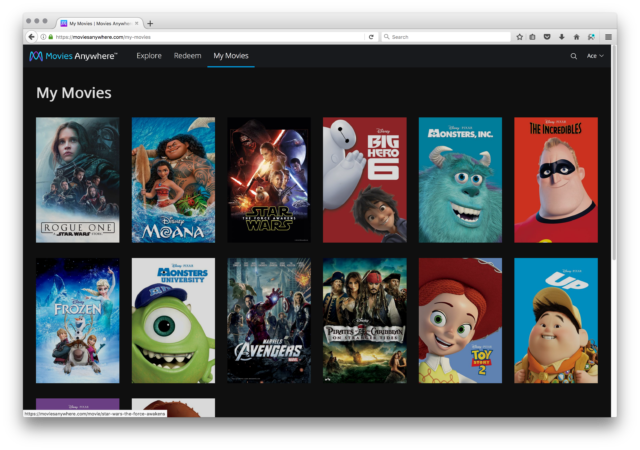 Notice the absence of Batman Begins (the two movies on the bottom row are Toy Story and Toy Story 3). 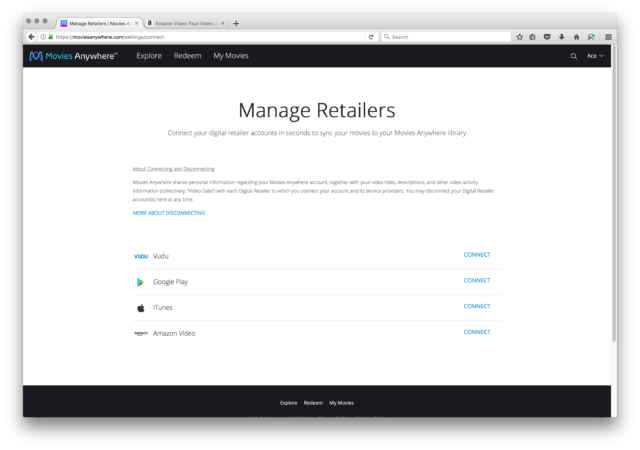 Next step is to connect my Amazon account. Before I did that, I logged onto Amazon to check out my measly library: 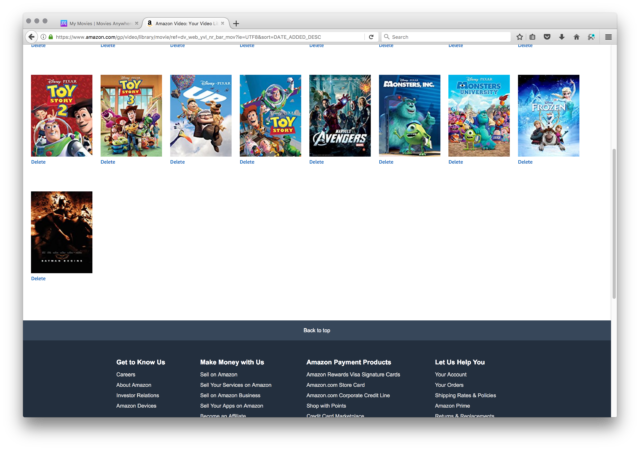 There is Batman Begins. Like I said, Disney Movies Anywhere was already working with Amazon, so you also see all my Disney movies. Now I’m ready to connect: 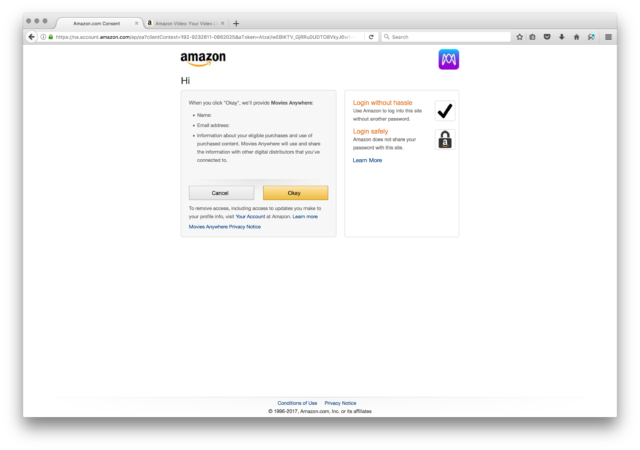 Amazon (and the other retailers) asked me to verify. Heck yeah, I’m okay with it! After confirming, I’m back to the My Movies page, and voilÃ ! Batman Begins is now in my library: 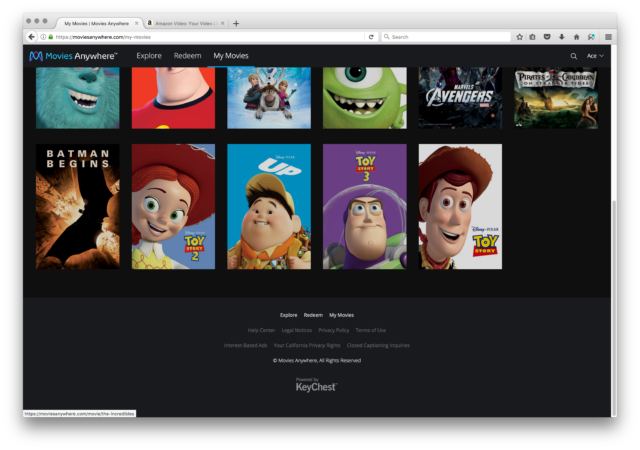 If you sign up and connect one retailer to your account, you’ll get Ghostbusters (2016) and Ice Age added to your account for free! Connect a second account, and you’ll score Jason Bourne, Big Hero 6, and The LEGO Movie as well. 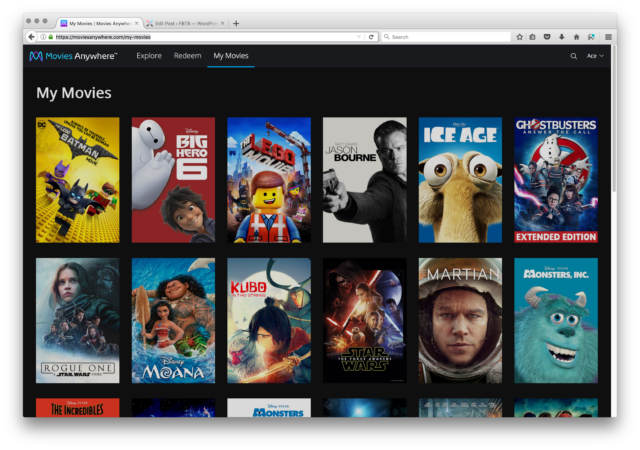 My freebies immediately showed up once I connected my iTunes account as well as The LEGO Batman Movie which I happily paid for again. It makes special sales like The LEGO Batman Movie for just $2.49 all the sweeter since a) you don’t have to mess with Ultraviolet, b) you can buy your movies from anywhere, and c) you can watch them anywhere!

I did not get paid to write this, and received no kickback whatsoever. I’m just super excited for this service, and you should be too! Sign up for Movies Anywhere and take the headache of managing a digital movie library.

Your Movies, Together at Last

Announcing the launch of

Using the free Movies Anywhere appÂ and website, consumers can access all their eligible movies by connecting their Movies Anywhere account with their participating digital retailer accounts. Movies Anywhere syncs usersâ€™ libraries across their connected accounts, so consumers can watch their purchased and redeemed digital movies on an array of platforms including Amazon Fire devices; Android devices and Android TV; Apple TV; Chromecast; iPhone, iPad and iPod touch; RokuÂ® devices and popular browsers, with more platforms and retailers to come.

â€œMovies Anywhere is a massive step forward for the consumer digital media experience, bringing the incredible film libraries of five studios together in a virtual one-stop movie-watching shop,â€ said Karin Gilford, General Manager, Movies Anywhere, who leads an independent, dedicated cross-functional team of product, technology, marketing and other professionals. â€œMovies Anywhere means that consumers never have to remember where they purchased a film or which device they can watch it on, because all of their eligible movies will be centralized within their Movies Anywhere library and available across platforms through the Movie Anywhere app and website and also available at their connected digital retailers. And as Movies Anywhere continues to add more studios, retailers and platforms, the entertainment possibilities are endless.â€

Movies Anywhere initially features access to a library of over 7,300 digital movies, along with fresh previews and film extras from the studios responsible for such 2017 global blockbusters as Disneyâ€™s â€œBeauty and the Beast,â€ Warner Bros.â€™ â€œWonder Woman,â€ Sony Picturesâ€™ â€œSpider-Man: Homecoming,â€ Universalâ€™s â€œThe Fate of the Furiousâ€ and Twentieth Century Foxâ€™s â€œWar for the Planet of the Apes.â€

In celebration of this exciting new digital entertainment destination, Movies Anywhere is welcoming new users with a limited-time offer to receive up to five digital movies. Activate and connect your account with one of these participating digital retailersâ€” Amazon Video, Google Play, iTunes or Vudu â€”and youâ€™ll receive a digital copy of both Sony Picturesâ€™ â€œGhostbustersâ€ (2016) and Twentieth Century Foxâ€™s â€œIce Age.â€ Connect with a second participating digital retailer and Disneyâ€™s â€œBig Hero 6,â€Universalâ€™s â€œJason Bourneâ€ and Warner Bros.â€™ â€œThe LEGO Movieâ€ will be added to your digital movie collection.