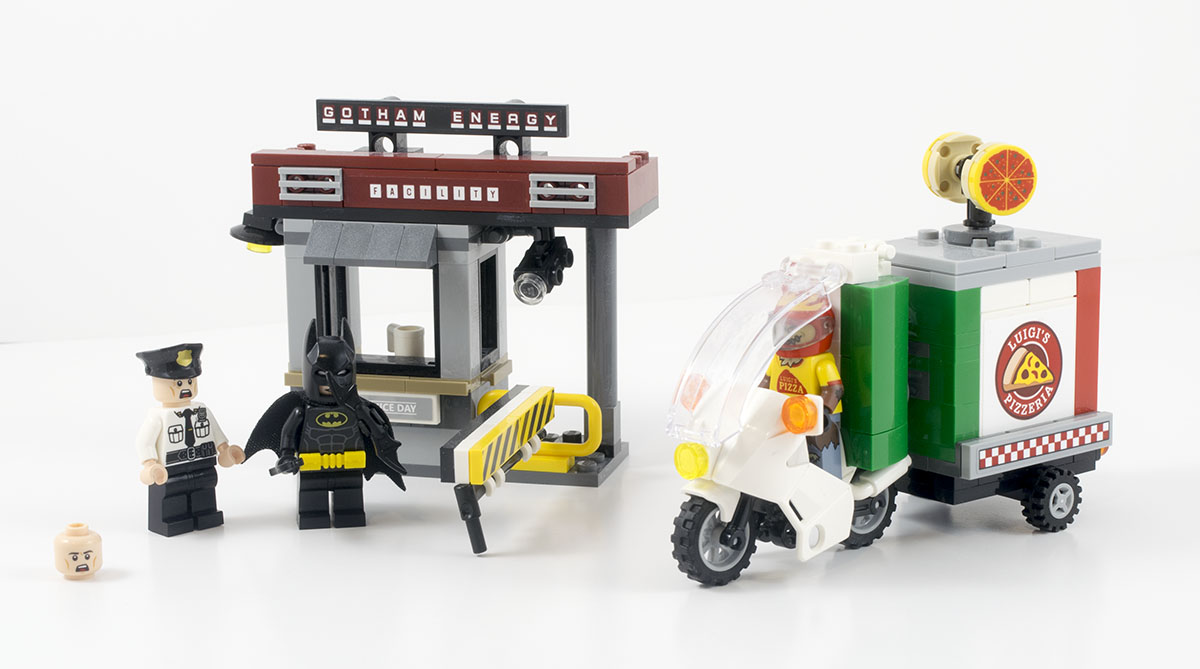 This review of 70910 Scarecrow Special Delivery will wrap up my portion of the LEGO Batman Movie sets… at least until the next waveÂ comes out and Ace and I start a fight to the death to decide who gets to review the Batwing. Still, he’s on the hook for the Scuttler (which I own and like) and Clayface (which I haven’t bought yet and think looks ugly). I’ve actually owned this set since it first showed up, but thanks to S@H’s information once you order a product being just horrible, combined with FedEx apparently not knowing how to handle a package, it was delayed from showing up when I took pictures of the rest of the sets.

I can confirm that a portion of this does existing in the movie, though if you blinked at any point during the opening sequence, you likely missed it. I’m a sucker for food trucks, though, so it was something I knew I wanted. We’re also without a proper Scarecrow figure in really any form until the summer wave hits, and I’m not that big of a fan of the one that comes in the Harvest set (another in the near future review).

This 204 piece, $19.99 set is a Walmart exclusive in the US., and I think that they agree with my general sentiment on all of the cheaper LEGO Movie Batman sets that it’s too expensive, since it’s been on price cut to $16.82 since it first arrived in stores (still full price on Shop@Home ifÂ you order that way or don’t have access to a Walmart – shipping and handling pushes it back up over the SRP if you don’t add on other stuff). Still, little sets are always nice, and who doesn’t love some pizza? 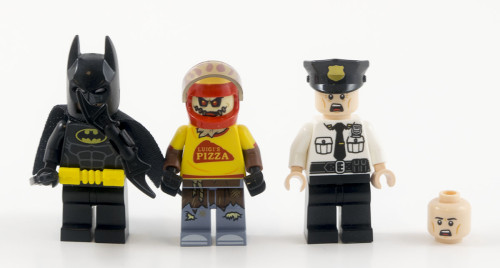 No one, that’s who. I’ve known people that hate tomatoes and cheese who still like pizza. If my daughter had her way, it’d be pizza, lemonade, and blueberries for every single meal. I’m sure that Batman even knows a Lobster ThermidorÂ Pizza recipe. Anyway, minifigures. We get three, another Batman, delivery boy Scarecrow, and the two-headed security guard. Seriously, we can’t get alt non-masked heads for most of our heroes yet we can get a security guard with variations of the confused and scared face? Batman I’ve reviewed seemingly a hundred times now (or nine, something like that), so you can go find out about him in almost all of the other reviews. 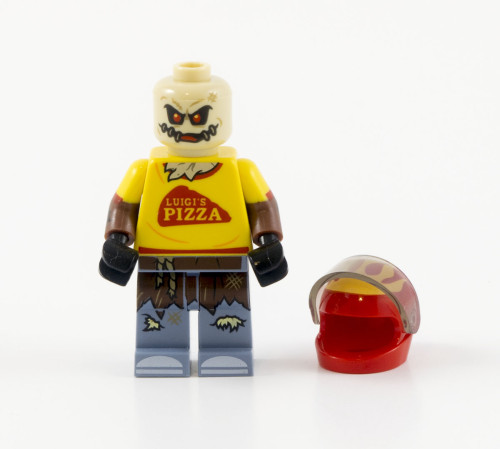 Scarecrow on his bike was quite literally a blink-and-you’ll-miss it moment at the start. He was featured very quickly at the start of Joker explaining his plan. Like almost all of the rogue’s gallery, he doesn’t get much in the way of lines or action, but he is there, and is the only one who gets a disguise on top of his disguise. Though I don’t think that LEGO gets that it’s just a mask over Dr. Crane (sadly, Jonathan, not Frasier… though there’s a spin-off I would be entirely on board with), because they make it look like he’s got actual stuffing coming out of the shirt. 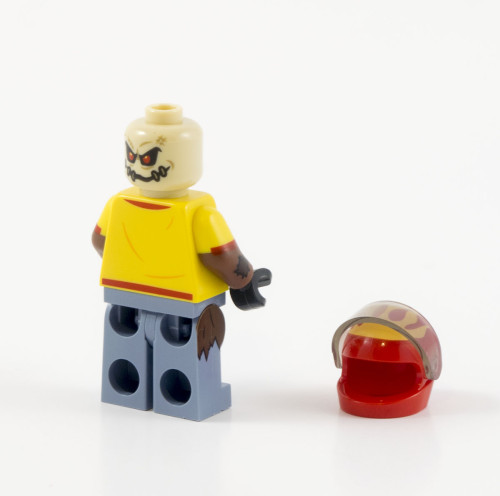 As a figure, this would be a whole lot better (both as a disguise and as a figure) if it was just a regular delivery torso, and didn’t have all the extra scarecrow bits on it. They could have made it work well too, just by keeping the legs and head, but instead we get a torso (and legs) with pretty much a single use. I’ve never been a huge fan of LEGO’s take on Scarecrow, and this figure doesn’t do anything to improve that. Also, would you ever accept a pizza from this guy? 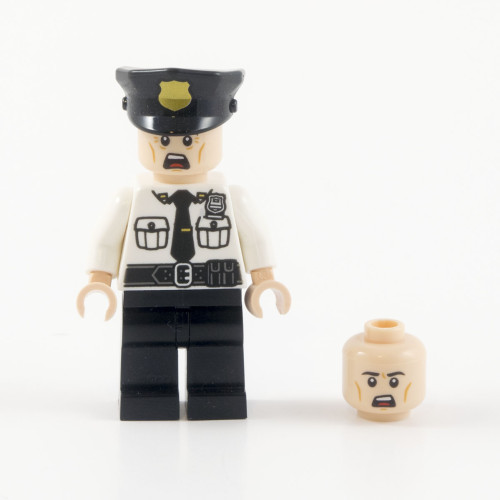 Here we have what is quite clearly the single most important security guard ever. So important, they gave us an extra head for him, something that we don’t get for the myriad of different heroes and villains that may be wearing a mask and have a reason to show up in their secret identity or something. Sure, you may not have even noticed the 5/8ths of a second he was on the screen, but without him, the whole movie would have been so different. Not a bad figure, though, and could easily be turned into something better and more useful, like a victim in a Robocop MOC. 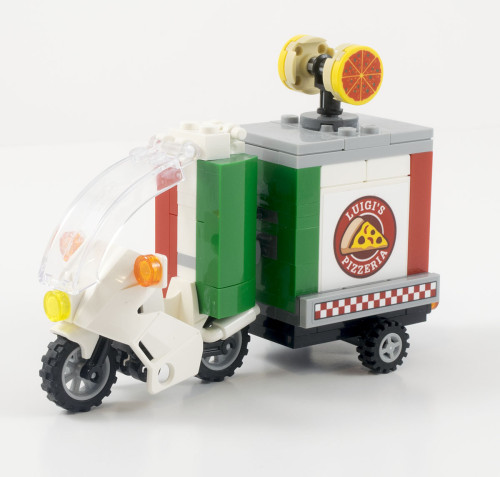 Scarecrow, in this version, features a pizza delivery rickshaw, which seems like a weird thing on it’s face, but looks pretty decent. This vehicle was on the screen even less time than Scarecrow was, and wasn’t his final vehicle (which, to be honest, I don’t even remember). Still, by itself, it looks pretty nice and could be put a number of different places. Mine is currently sitting on the shelf with my modular buildings.Â 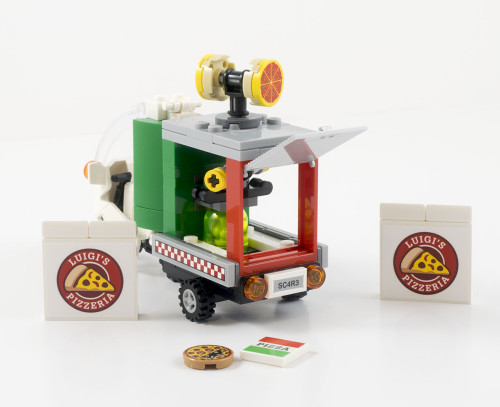 This is a Batman playset, though, so it has to include some sort of nightmare fuel and play features, so in this case, it’s a pizza with a face (and a fantastic little pizza-box tile), and sides that pop out. The pizza “sign” on the top pop them out, sort of, but honestly I just removed those bits and set up just as a pizza cart. The “SC4R3” license plate is a very nice touch though. I wonder if the Scarecrow has ever considered that he’d probably do better just delivering normal pizza, since the legal bills with the illicit kind likely take away any sort of profit.Â 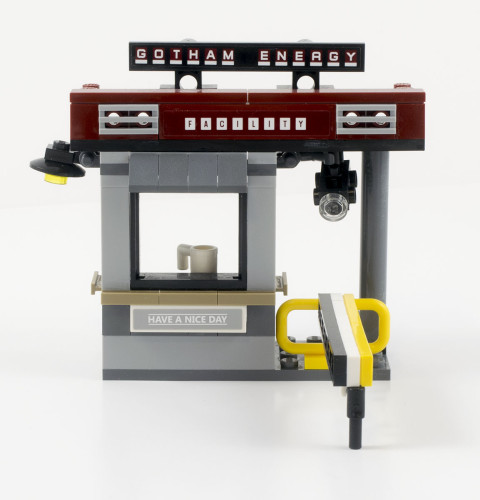 The point of the whole rickshaw, and the scene in general, is that all of the villains are breaking into the Gotham power plant to blow up the city or something (or break the fault and let them plummet into the void from the LEGO Movie). That translates to a guard stand with poor protection against the elements. I don’t have a lot to say here… there are some stickers that could be interesting… otherwise this is small and entirely forgettable. 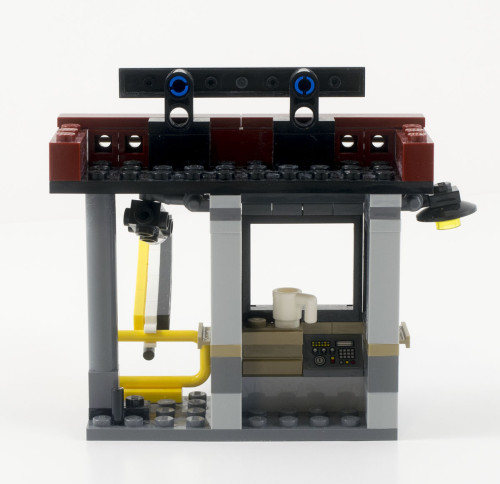 It doesn’t really fit with the rest, either, since this is outside where the battle happens. Mostly, it’s just a “okay then” set of bricks that I’m not sure anyone would keep around. A lot of it is kind of lazy, like the barrier arm that just clips on to a railing part, and therefore pulls it off easily. The top, likewise, seems to be just good enough to hide the stands for the sign… which seem like they would have been better on the 90-degree bracket parts. I wouldn’t even call it bad, just a bucket full of “meh” that’s destined for extra parts.

That’s really the problem with this set. We know that there’s a more traditional Scarecrow figure coming in the summer with the next wave of LEGO Batman Movie sets… a tiny helicopter in a $15 set. So we lose Generic Joe up there, get a vehicle (with brown wings that will invariably end up in some variety of a Jedi Interceptor), and it costs less. It’s hard to justify this set, and that’s made worse by the fact that it’s a Walmart exclusive on top of everything. One that even they don’t seem to have a lot of faith in, since it’s been on rollback to $16.82 since it was released. The little rickshaw is cool, but not all that much else in the set strikes me as worthwhile. Calling this one aÂ two out of five.

Verdict: 2 out of 5. You can pick this set up at Walmart.com price right now for $16.82, with free in-store pickup where available. 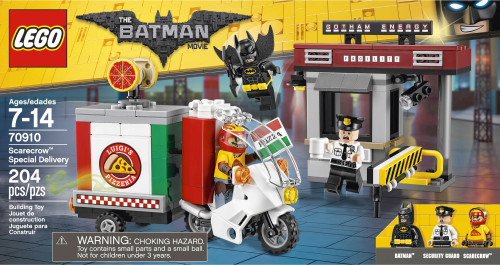