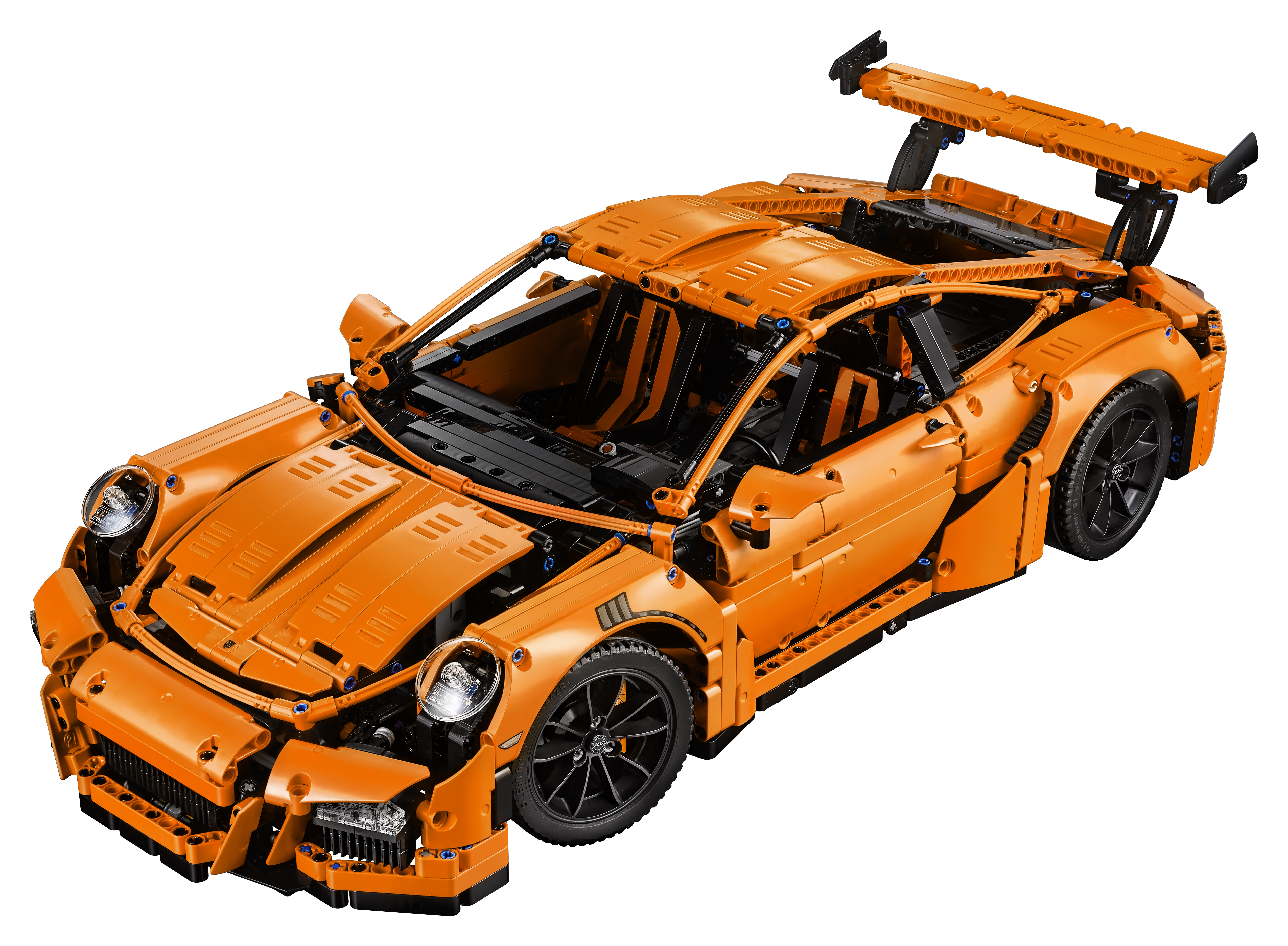 Along with the usual assets that LEGO delivered for the new 42056 Porsche 911 GT3 RS set, they included bios and a short interview with Senior Design Manger, LEGO Technic Andrew Woodman and Senior Designer, LEGO Technic Uwe Wabra. The most revelatory piece of information to come out of the interview is that the Porsche set is the first in a new line of Technic vehicles. While there have been other highly detailed licensed Technic sets before, there is more than one reference of this set being “the first”.

The designers of the LEGO Technic Porsche 911 GT3 RS Andrew Woodman and Uwe Wabra are talking about their dream project â€“ from the idea to the complete model.

What was the idea behind this project?

Andrew Woodman, Senior Design Manager, LEGO Technic:
As a lover of design and high-performance cars, it was a dream to make the Porsche 911 our first model. When we started to collect ideas for this new LEGO Technic model, we realized that we wanted to create more than just a great building experience. It should be all over special. We knew that we needed a partner with the perfect vehicle that was both highly desirable and a true icon. So we reached out to Porsche.

How did the cooperation with Porsche run?

Andrew Woodman, Senior Design Manager, LEGO Technic:
The cooperation with Porsche was fantastic. The employees are incredibly passionate for the Porsche brand and showed huge interest in our LEGO Technic model.
From our very first meeting it was clear that Porsche shared the same passion for the vision of this concept and together we decided upon using the current 911 GT3 RS as the first vehicle in this LEGO Technic series.

How much time did the whole process take and what were the particular development steps?

Andrew Woodman, Senior Design Manager, LEGO Technic:
The whole process took almost two ages: From the development of initial design ideas concerning the concept in winter 2013 to the final approval of the model by Porsche in fall 2015.

Uwe Wabra, Senior Designer, LEGO Technic:
When we started our initial drafts in 2013, the Porsche 911 GT3 RS project remained top secret. Therefore I had to build the first LEGO version using photos of the camouflaged prototype of the original from the internet. The first LEGO prototype was ready in a matter of weeks.

Andrew Woodman, Senior Design Manager, LEGO Technic:
We presented the result of the first model to the design team of the 911 GT3 RS at Porsche and discussed the basic technical functionalities as well as the shape of the body. On the basis of this feedback we designed the next model and simultaneously started with the development of the wheels rims which are an important part of the legendary design of the car. Afterwards we visited the Porsche Development Center in Weissach as well as the Porsche GT workshop area. During intensive working phases we worked out the elements and details of the car and perfected them. The final step was the approval by Porsche.

Did you experience a special moment during the development phase?

Andrew Woodman, Senior Design Manager, LEGO Technic:
During our visit at the Porsche GT workshop area we could see a preproduction 911 GT3 RS complete and finished in lava orange. This was the first time we saw the car in color â€“ all the others had been black which made it difficult to see the proportions and details of the car.

How many persons were involved in the development process?

Andrew Woodman, Senior Design Manager, LEGO Technic:
Several persons participated in the development of this model: Among others, a graphic designer started working on the required decorations and stickers. In the meantime model designers worked further on the styling and on the development of particular components, for example the gearbox.

What were the challenges during the development of the LEGO Technic Porsche 911 GT3 RS?

Andrew Woodman, Senior Design Manager, LEGO Technic:
One of the biggest challenges for us laid in designing an element that works on the 911 GT3 RS, but also in general with all others LEGO Technic elements. Furthermore something that could work in our system for years to come.

Uwe Wabra, Senior Designer, LEGO Technic:
It was important to integrate as many of the advanced technical functionalities from the real 911 GT3 RS as we could. The steering and suspension were difficult enough, but our biggest challenge was the creation of the functioning double-clutch transmission with gearshift paddles.

Andrew Woodman is Senior Design Manager at LEGO Technic and working for the LEGO Group since 2003. The design lover has a passion for all kinds of vehicles, yachts and architecture. He passes on this passion and knowledge for design by lecturing at colleges hopefully inspiring and motivating others to become interested in his profession.
Uwe Wabra is Senior Designer in the LEGO Technic department. He has been working for the LEGO Group for already ten years. Uwe has a huge passion for all things automotive as a glance in his garage reveals. It really is an eclectic collection of cars, bikes and trucks, consisting of originals as well as models, which is spread all over his house.
â€ƒ
About LEGO Group:

The LEGO Group is a privately held, family-owned company with headquarters in Billund, Denmark, and main offices in Enfield, USA, London, UK., Shanghai, China, and Singapore. Founded in 1932 by Ole Kirk Kristiansen, and based on the iconic LEGOÂ® brick, it is one of the world’s leading manufacturers of play materials.
Guided by the company spirit: “Only the best is good enoughâ€, the company is committed to the development of children and aims to inspire and develop the builders of tomorrow through creative play and learning. LEGO products are sold worldwide and can be virtually explored at www.LEGO.com.
For more news from the LEGO Group, information about our financial performance and responsibility engagement, please visit http://www.LEGO.com/aboutus.
LEGO, the LEGO logo, the Minifigure, DUPLO, LEGENDS OF CHIMA, NINJAGO, BIONICLE, MINDSTORMS and MIXELS are trademarks of the LEGO Group. Â©2016 The LEGO Group

Under license of Porsche AG

Current position: Senior Design Manager LEGO Technic
– Andy Woodman, age 44, married with 1 daughter aged 4 who already shares her dadâ€™s passion for speed and loves to ride around on her own Ducati
– Lives in a forest area of Denmark in a house they designed and built themselves
– Has a first class Honâ€™s degree in Industrial Design and Masters degree in Vehicle Design from the Royal College of Art, London
– Work experience includes RLE international, DAF Trucks Holland, Emap and Lego System A/S where he has worked since 2003
– Has a passion and interest for all forms of design especially Architecture, Vehicles and Yachts. Passes on this passion and knowledge for design by lecturing at local colleges, hopefully inspiring others to be interested in perusing a design career
– Loves cars and all things automotive, especially racing his rally prepared Porsche 911. Loves road trips and exploring new places, hates plane travel, not flying, just everything associated with it. Still looking for the ultimate family car, to use on a grand tour with the family and explore new places

Current position: Senior Designer in the LEGO Technic department
– Uwe Wabra, has worked at the LEGO Group since 1996
– Lives close to Billund in a home he has renovated over a number of years and is constantly evolving to accommodate his fantastic collection of Auto Memorabilia
– Originally trained as a chef at a prestigious Danish Hotel before turning to his other passion, carpentry. Then in 1996 he got the opportunity to reignite his childhood passion for LEGO Building by accepting a position with the LEGO Group in the LEGO Technic department
– Since then he has had many roles designing for other departments in the company but his passion is for the LEGO Technic models and is very happy to be back working with the LEGO Technic team
– Has a passion for all things automotive â€“ just take a quick look in his garage or at his model collection, which is spread all over his garage and house. It really is an eclectic collection of cars, bikes and trucks
– His passion is for classic vehicles and of course, Porsche has a strong past. He has always had a Beetle and now that he has worked with Porsche, he really wants a 356