Well, for anyone who thought the story didn’t progress as quickly as they had wished in the first two episodes, this episode, “The Heiress” should have scratched that itch but given what happened, it was probably still frustrating. Let’s get to it. 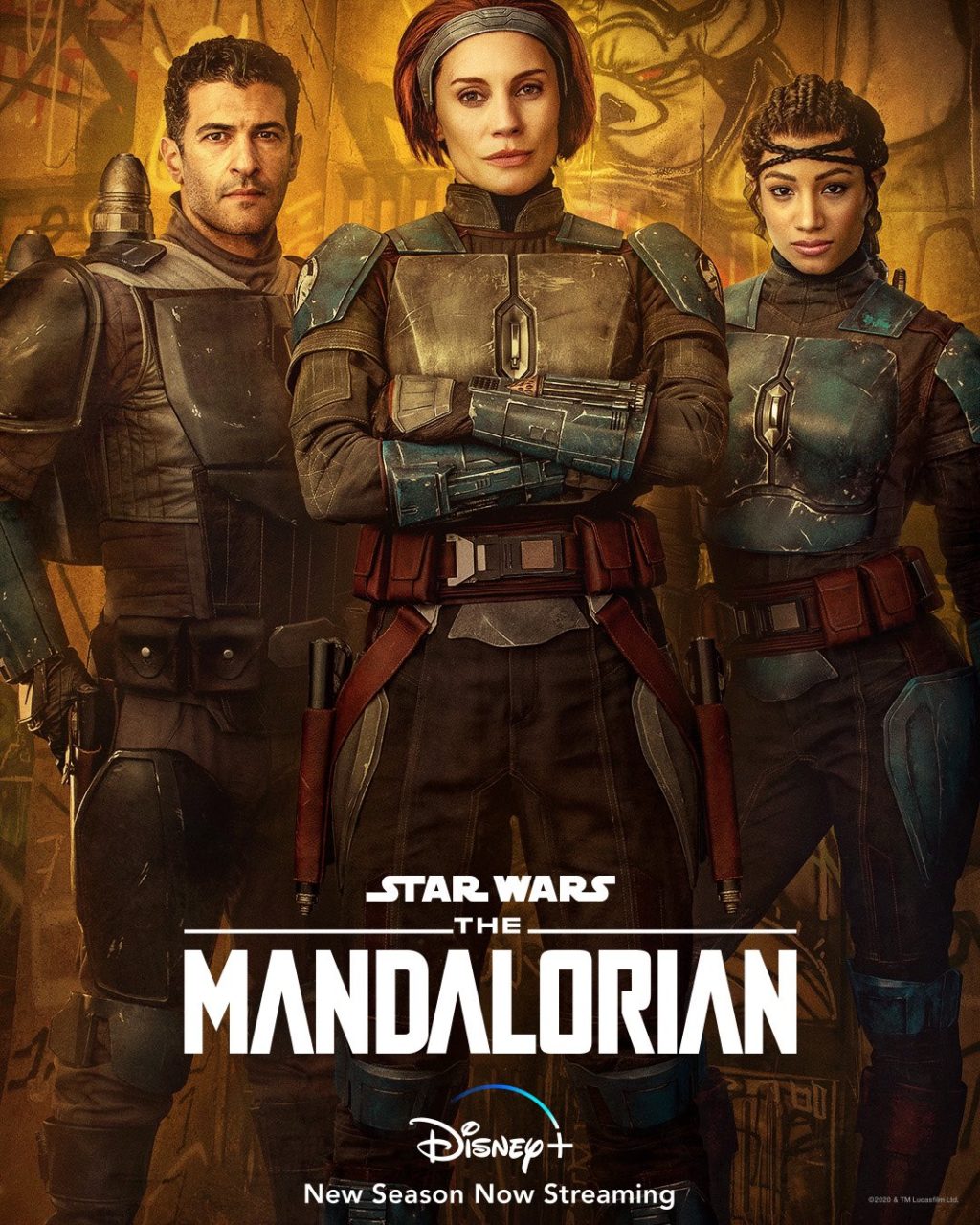 The episode opens up with the Razor Crest hobbling its way through space towards Trask. Everyone’s asleep inside the cock when things start going bloorp and bleep. The Mando swears “Dank farrik!” when he realizes the landing array isn’t responding. There’s a few tense moments as the Razor Crest heats up from penetrating the planet’s atmosphere. Frog Lady has to help by holding a lever back all the while making sure her boba blue milk tea to-go container doesn’t fall over and break open. The ship is practically on fire.

Meanwhile, down at the landing pad, a Mon Calamari working on the dock looks up and wonders what the flaming fireball is that’s heading for him. he puts his hands on his hips and tilts his head in a way that says, “What is it today”, and you know when someone does that they’ve seen some stuff and that nothing will really phase him. The Razor Crest is pretty much in a free fall and aiming for the landing pad. The Mando fires off his engines at the last possible second so they don’t crash slowing his descent enough to attempt a gentle landing. But his broken down Crest has other ideas, something breaks and the whole thing just falls into the ocean. That Mon Calamari? He just shakes his head and walks away. 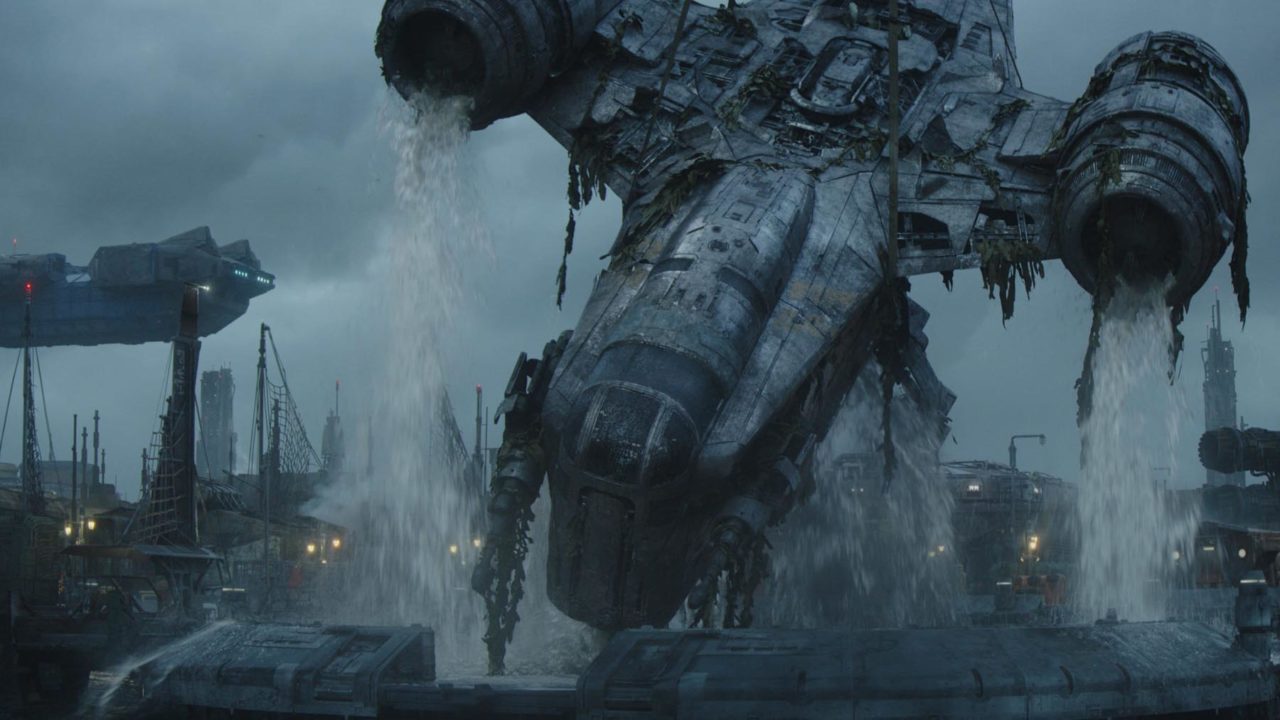 The next scene has a giant walking crane lifting the Razor Crest out of the water. The Mando, Frog Lady and Baby Yoda all survive, which makes sense cause if the cockpit was sealed enough to keep everyone safe in space, then water shouldn’t be an issue. The Mando pays the Mon Calamari spectator/dock worker some credits to get the ship fixed up.

You can see why Frog Lady and her man decided to settle here as there are Mon Calamari and Quarren everywhere. Gonna take a wild guess and say that most of the planet is water-based making it hospitable to aquatic species. Frog Lady reunites with Frog Man and the two of them examine the to-go container. Baby Yoda whimpers out of hunger and THe Mando wastes no time inquiring about other Mandalorians with Frog Man. Frog Man points him to the local inn. The Mando gets spied on by a mysterious cloaked figure, but no worries, she shows up again later.

The Mando and Baby Yoda head over to the inn, take a seat, and ask their server if he’s seen more of his kind. Dude says no but points him to another guy at another table. Baby Yoda tries to eat some chowder but an octopus looking thing does the Aliens facehugger thing and attacks his face. A Quarren moseys over and offers ferry to where he knows more are for a price. 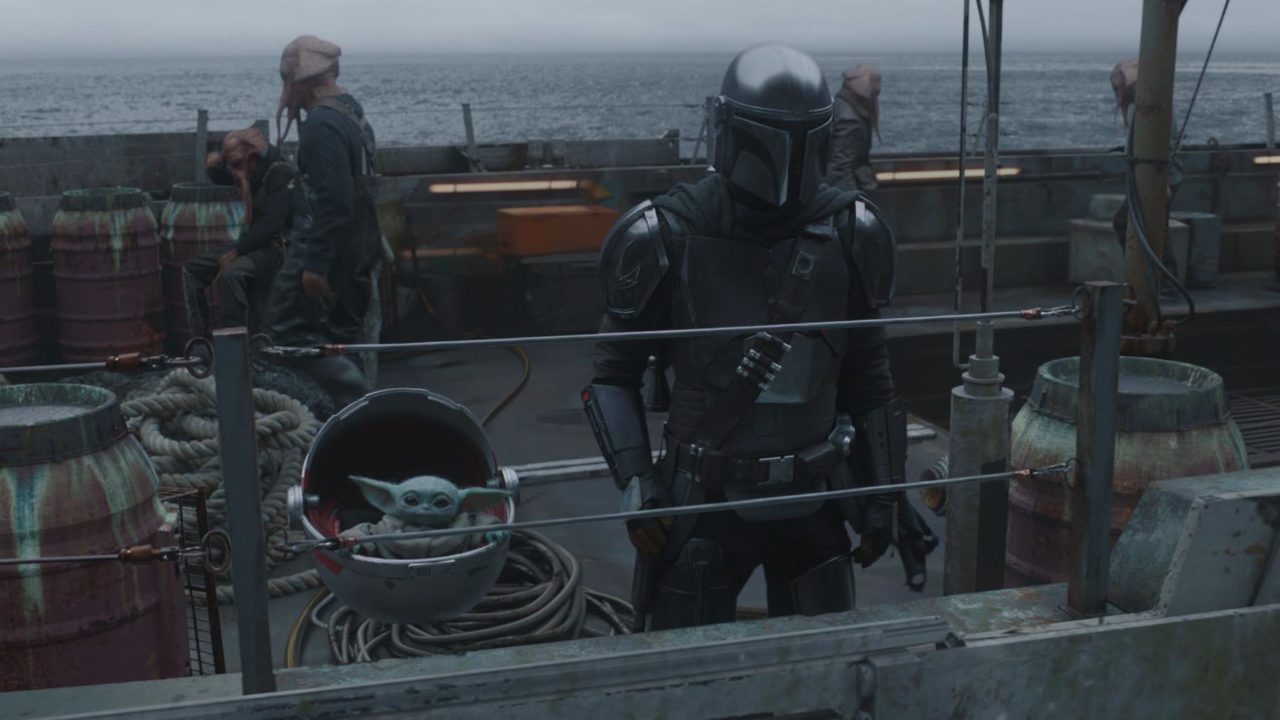 Next scene, they’re on a fishing boat and about to feed a mamacore. It’s situated in an underwater cage in the middle of the boat. The open up the iron gae to drop in some fish to feed it. And before you can yell,

The Quarren whacks the back of Baby Yoda’s pram and knocks it into the middle of the caged area. A top down view shows a giant mouth come up from the water to swallow the pram whole but not before the covers close at the last possible second. The mouth disappears back under the water and The Mando dives in after it. The Quarren yells at the Quarren to close the gate while making comment about the Beskar. So yeah, they’re just bunch of crooks. The Mando comes up for air and tries to hang off the grate. The Quarren strike at the grate to dislodge his hands to get him to drown.

Things are looking pretty grim. That is, until, a trio of Mandalorians fly in and take care of business. A bunch of warriors against Quarren fsherman thugs? It plays out exactly how you’d think. After a quick fight, they pull The Mando out from the water tank. He tells them that thing has the kid. One of the Mandalorian rescuers dives in after it. After a few blaster shots, she jet packs out of the water tank and tears the pram open. Baby Yoda is unhurt THANK THE MAKER and completely dry. That pram sure is sturdy.

The Three Mandalorians take off their helmet to The Mando’s surprise. Given that the last person he met with Mandalorian armor was not in fact from Mandalore, he understandably is quick to accuse them of being imposters. Turns out, they’re the real deal for the trio’s leader introduces herself as Bo-Katan of Clan Kryze. She schools The Mando that he’s a child of the Watch, a religious cult that broke away from Mandalorian society to re-establish the ancient way. The Mando doesn’t like what he hears and says in a very cultish way, “There is only one way. The way of the Mandalore” before jet packing off of the fishing boat to go back to the dock. The Three Mandalorians blow up the fishing boat before jet packing off.

It’s night now and The Mando is wandering the dark docks aimlessly when a Quarren confronts him. He accuses The Mando of killing his brother and now him and his buddies are going to kill him and his pet. Wrong choice of words pal. The Three Mandalorians come to the rescue again and easily take out the fisherman. They want to powwow with The Mando and go back to the inn to share notes.

Trask being a black market port, Weapons and Stuff comes through like all the time. The trio wants to take the Weapons and Stuff and take them back to Mandalore and reclaim their home territory. The Mando think’s the planet is cursed and that anyone who goes there dies, but Bo-Katan is all like, “Fake news!” and “Solidarity!”. The Mando can’t go though because he has a different quest line he has to follow through on and needs to find some Jedi. Bo-Katan can help, but only if The Mando will help her out. Of course.

The plan? The four of them take on an Imperial freighter and steal the cargo of Weapons and Stuff. They’re gonna take a crack at it at first light. The Mando needs a baby sitter. Back to Frog Lady he goes. Amazing how when they first met, he couldn’t understand Frog Lady but now he’s asking her for favors one episode later. She agrees because her motherly instincts and hormones are raging like a California wildfire and Baby Yoda is still a Baby. And no, Baby Yoda doesn’t eat any more eggs. Or tadpoles for that matter.

So with that little logistical issue taken care of. The Mandalorians attack the freighter. In a four minute sequence, they break through all of the defenses, make short order of all the Stormtroopers, and take over most of the freighter save the bridge. The Imperial-in-charge-on-the-bridge tries to contact someone to see what’s up. Bo-Katan answers and is like, “We’re gonna take over the ship so see you soon bestie!.” The Mando didn’t agree to hijacking a freighter and says to Bo-Katan, “You’re changing the terms of the deal.” There’s a dramatic pause before Bo-Katan replies, a pause just long enough for every Star Wars nerd in the galaxy to respond “Pray I don’t alter it any further.” But no, Bo-Katan cooly replies with, “This is the Way.” Boom! Take that, Mando! In your face! 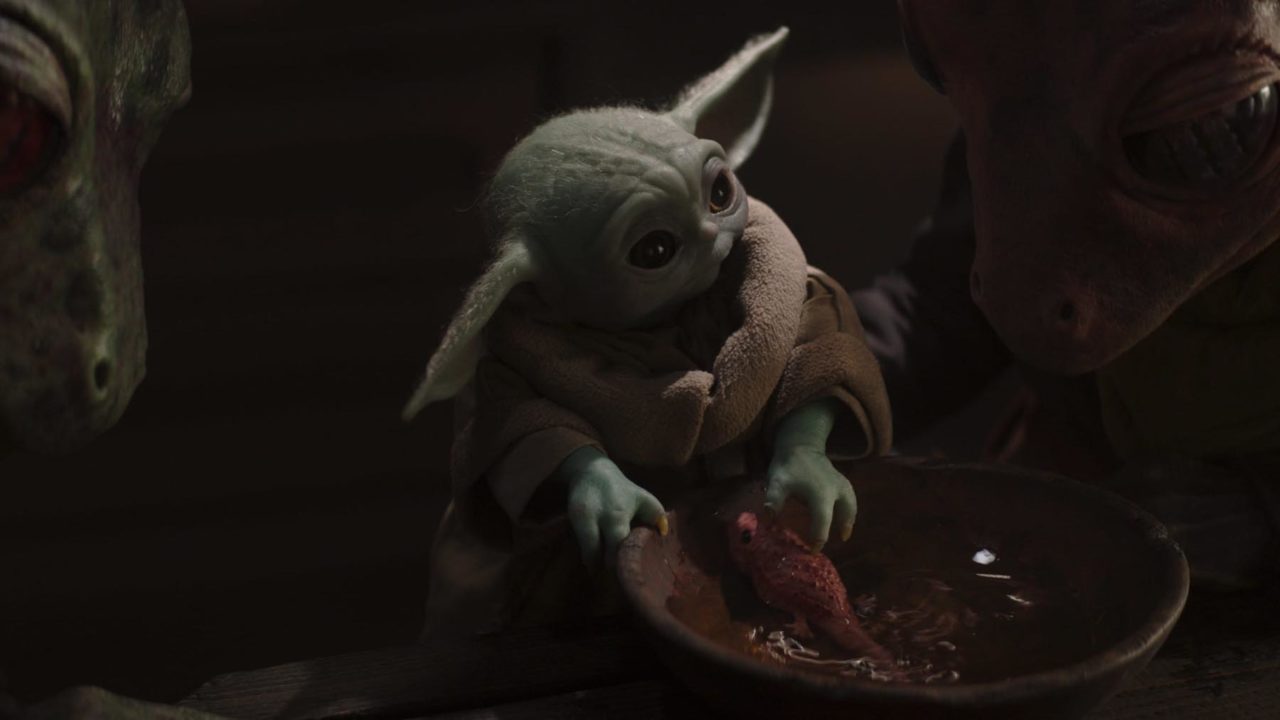 The ship levels off but they need to get the hell out of dodge since the ship sent a distress signal. The Mando’s gots to go and Bo-Katan finally gives up the info. She tells him, “Take the foundling to the city of Calodan on the forest planet of Corvus. There you will find Ahsoka Tano.” There is an exchange of “This is the Way”‘s before they part ways. The Mando departs and ges back to the Frog couple to retrieve the foundling. He’s having a grand old time playing with a tadpole. They head back to the Razor Crest and see what a slipshod job the Mon Calamari did. It’s put together at least, but looks like a serious patch job. The Mando laments with a “Mon Calamari” and leaves Trask. He now has a destination and a name. Progress! Roll credits.

Classic quest line rules. You follow a lead, find the person, or in this case persons, you’re looking for, but sorry Mario your princess is another castle and you’re sent off on another quest. That’s not a complaint really but it is a bit unsatisfactory. The Mando’s been sent from one lead to another to another. But this time, we have a destination and the name of a major character, Ahsoka Tano. So there is some progression but I fully expect the next episode to take a detour somehow and that we won’t actually get to meet Ahsoka until closer to the season finale. I’d love to be wrong though.

I reread that Polygon article again and they updated it include some details revealed from this episode. It’s worth reading to see how some of these characters’ fates are tied to the Darksaber if you’re not familiar with The Clone Wars and Rebels. I doubt this will be the last we see of Bo-Katan while she fights to take back her homeland.

The Mandalorian Season 2 Gets Official Air Date of October 30