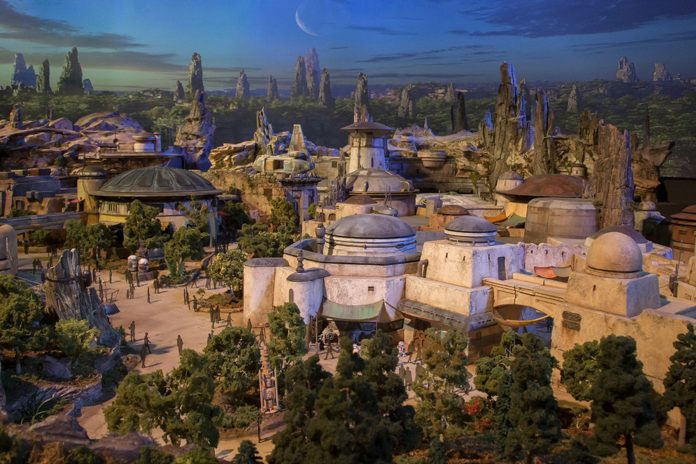 I rode Star Tours four times yesterday. Or maybe it was five. I kind of lost count. And honestly, it wasn’t all my idea. My son just really liked it. So throughout the day I’d ask him what he wanted to ride next and he’d always say, “Star Wars!” And I was totally fine with that.

Except it played the same two sequences during every ride. If you’ve never been on Star Tours, its basically a simulated ride where everyone piles into a box made out to be the Starspeeder 1000. You put on 3D glasses and watch a couple of action sequences on the screen while the box lifts and tilts to match the movements on screen. The story is that you are part of a tour group and there is a member of your party that is a spy. The Imperial forces try and detain you, you escape the space station, weave through a space battle, and then make the jump to lightspeed and fly off to a distant planet (or asteroid field). On that planet (or asteroid field), you play out a part of a movie sequence, and then receive a radio transmission from a Rebel or a Rebel sympathizer. After the message plays, you make another jump to another planet and play out another movie sequence. And then finally, after your last jump you land in a Rebel-friendly setting.

The two planet sequences are randomized. At least they are supposed to be. The four times we went through we got the same two sequences: the Falcon escape scene from The Force Awakens and the Battle of Crait from The Last Jedi. The initial escape sequence and the message transmission were random though. For those of you who have ridden it, there is an escape sequence where Darth Vader flies on a floating platform ordering you to stop and then uses the force to prevent you from escaping until you fire blaster shots at him; they’ve updated that to have Kylo Ren be on that platform and changed the dialog and voice to match. It was kind of neat to see that they are updating sequences to keep it fresh. The message transmissions were also randomized. One time we got BB-8, one was Poe Damaran, and the other two were from Maz.

Now the flying action sequences weren’t the only things that were repeated. Usually, the place where you land is different. Coruscant, Naboo, some capital ship, etc. This time, we landed in a place I’ve never seen before. At first I thought it was a location from Solo. During my second ride I tried looking for some clues like a character in the background or something. Nada. It wasn’t until my third ride that I finally asked a Disney crew member and he informed me that it was a preview of Star Wars Land. 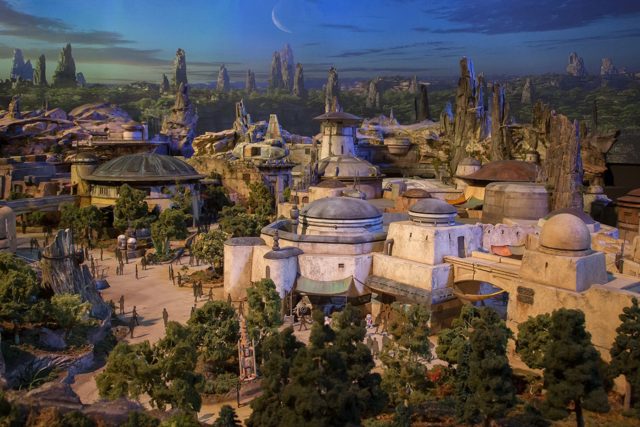 The picture above is a scale model shown at D23 of what it’s going to look like once it opens at Disneyland California.

On my fourth ride, I paid attention to C-3PO and his dialog changed too. He says right at the end, something something “where a new adventure begins.” Kind of neat.

This will be going on until sometime in May. That doesn’t really make any sense why the same two sequences would be locked in for a short period of time. If it’s locked in until May 2019 (2019 is the year that Star Wars Land is going to open), then that is truly disappointing. Part of the fun is the anticipation and not knowing what sequences you’ll get. My kid really wanted to see the forest moon of Endor since Star Tours was hyping it as a location on the big screen above the queue. But alas, we’ll have to wait until next time and hope we get lucky.

Star Tours is stop number 1 every time I go to Disneyland. It’s my favorite ride. If you’ve never been fortunate to experience it, I found this video on YouTube that shows exactly what I’m trying to describe. I suppose I could have tried to record video myself but I’m not about to risk getting kicked out doing that.