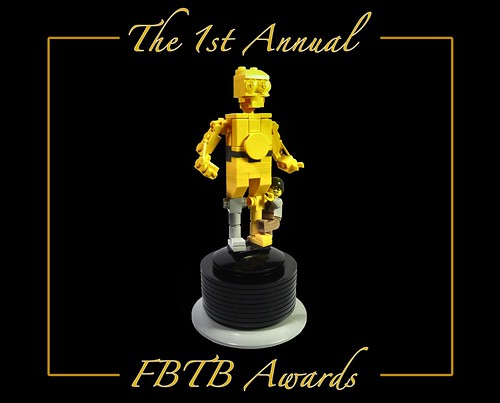 Ever since I took over the site way back in 2002, I’ve always had an inkling to do an annual awards feature to celebrate the special achievements that LEGO has produced for the Star Wars theme but never had the energy to do it. Now that we’re in the 11th year of the license with no signs of it slowing down, coupled with more licenses under LEGO’s figurative belt and even more on the horizon, it may be long overdue but it’s finally time to get the show underway.

With the help of my staff, most notably Ken “buriedbybricks” Robichaud and Ryan “chief” Wood, we’ve set up awards categories for licensed theme sets and minifigs. You, the reader, have an opportunity to participate in determining the winners of each category. We’ve set up a special forum giving both registered and non-registered users the ability to vote in a poll. That’s right, you don’t have to be a registered member of the forums to vote. All of the polls will be open for approximately three weeks until November 15 and taken down before the results are revealed. Your votes will determine the Readers’ Choice awards. There’s a separate set of polls that the staff members have voted in for the Staff Picks. We’ll be announcing all of the winners in a featured set of articles starting in December.

These are the following categories for licensed theme set of the year:

The following categories are for licensed theme minifig of the year:

Please be aware that many of the polls allow you to pick more than one option.

If you’ve noticed, there is no category for Best Spongebob Squarepants Set 2011. For a licensed theme to warrant its own category, the theme must have seen a minimum of three sets released in the year and Spongebob had only two. So the Spongebob Squarepants theme is lumped into the Best of the Rest 2011 category along with the other one-off licensed sets. Also, not all sets are included in the polls, such as the seasonal polybag sets. In order for a set to qualify, the set must have been at least available for purchase through LEGO Shop@Home or another internet retail channel in the US.

We have a few other special awards that will be revealed at a later time.

We hope that everyone reading this will take a few minutes to cast your vote for which sets and minifigs deserves a Bothie in the 1st Annual FBTB Awards.