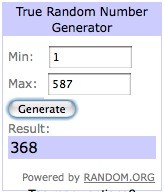 My sincerest apologies, fans, for this better-late-than-never update on the charity. I sincerely believed that I would be able to tie this up the day I was discharged from the hospital, which, coincidentally enough, was December 21. But time ran away from me and there were certain things that HAD to get done around the house. Having a preemie certainly accelerates one’s timetable to near lightspeed levels.

So, excuses aside, I’m here to give the update everyone’s been waiting for, the results of the first annual FBTB Charity Drive! I am filled with pride to announce that we’ve received a total of 587 donations, as evidenced by the cropped gif below:

Using the random number generator at random.org, the winning entry is #368: 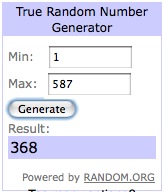 Matching up the number to the email received in chronological order, and your first place winner is:

I’m not going to bother doing the whole image thing for second place, you’ll just have to take my word that I repeated the process. So, without further ado, second place prize goes to #106:

Congratulations to both of you! Your prizes are being mailed out today via Express Mail.

And last but not least, the payment to Child’s Play has been made:

to everyone who donated $2, $10, or more. I have been smote down by your generosity.