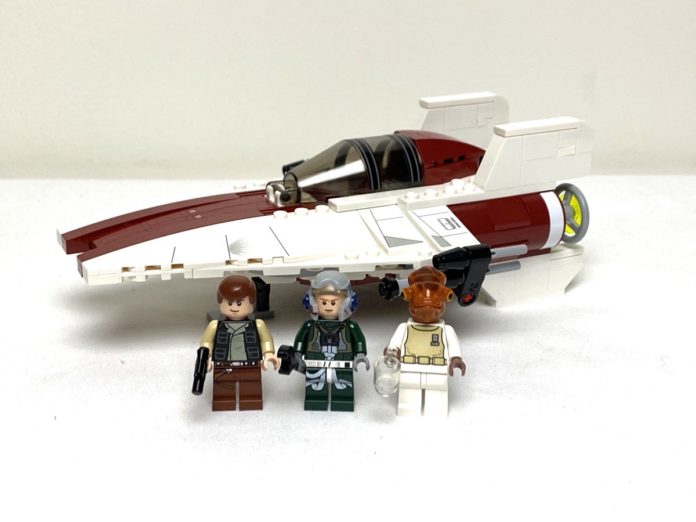 This review of 75003 A-Wing Starfighter may be a few years late, after all this set came out in…. ::checks the bottom of the box:: 2013. But it’s been sitting around taking up some space. Feeling inspired enough the other day to build it and knock out a review brings us to this point in time. The first and last A-wing I reviewed was 6207, giving it an 8.3 out of 10 back before we simplified our scores. It would translate to a 4 out of 5 now using our current method. It was a vast improvement over the original thanks to the massive wedge elements and curved sloped pieces. 6207 came out in 2006 (even though the date of my review is 2005; not sure how that happened) and just 6 short years later, we are graced with the new 75003 rendition. 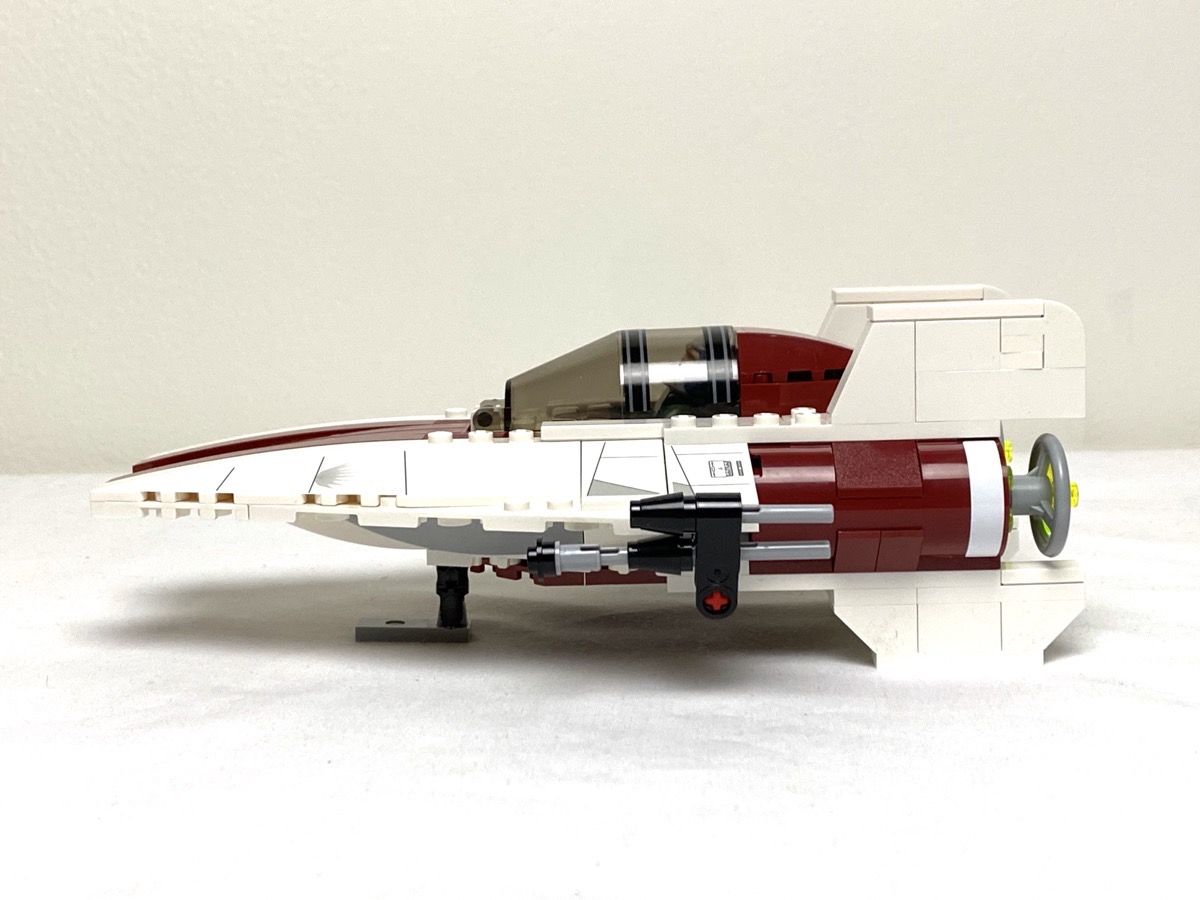 While offering some improvements, it hasn’t really changed all that much from 6207 in the 6 years between releases. The 75003 version still uses brick built vertical stabilizers, uses the bottom ones as part of the landing gear and incorporates two of the classic Star Wars engine parts. 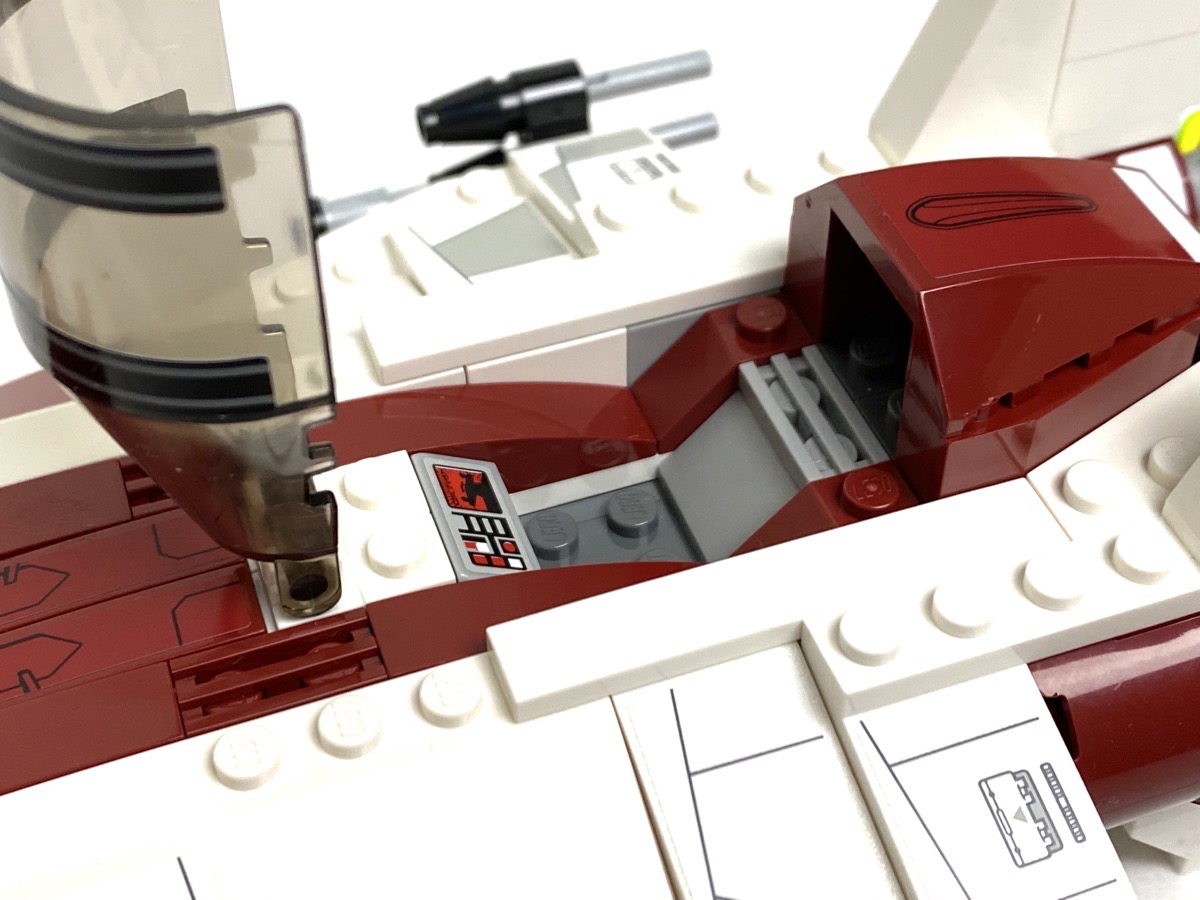 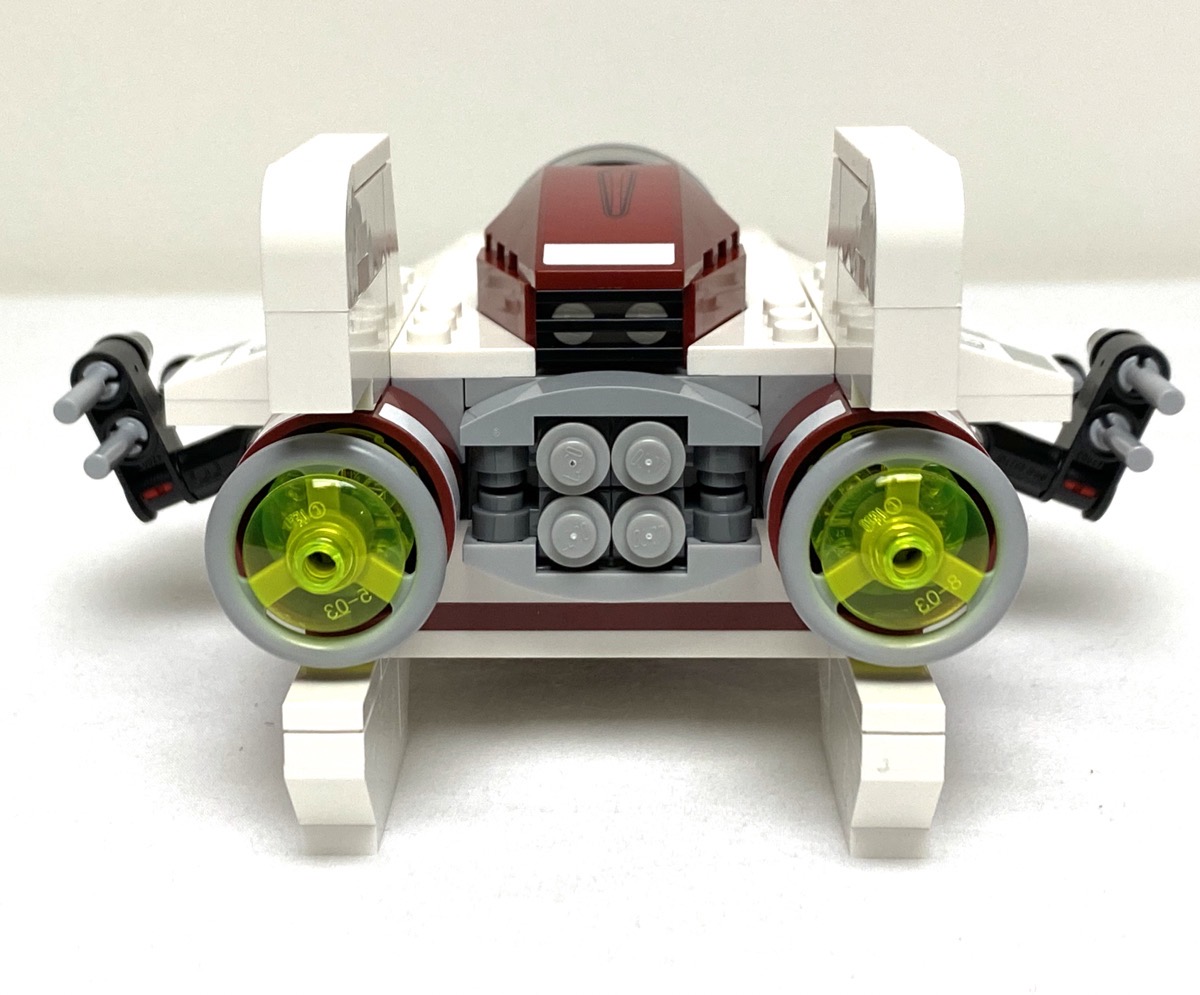 The rear of the craft is dressed up differently and the engines remained mostly the same. I’m assuming they did what they usually do and took the old model and tweaked it a bit. While most of it looks and feels the same, it doesn’t suffer from Snowspeeder-itis where LEGO will just release the same set with no changes or with just a slight color change and charge more. The changes in 75003 A-Wing Starfighter are noticeable and improve the model overall. 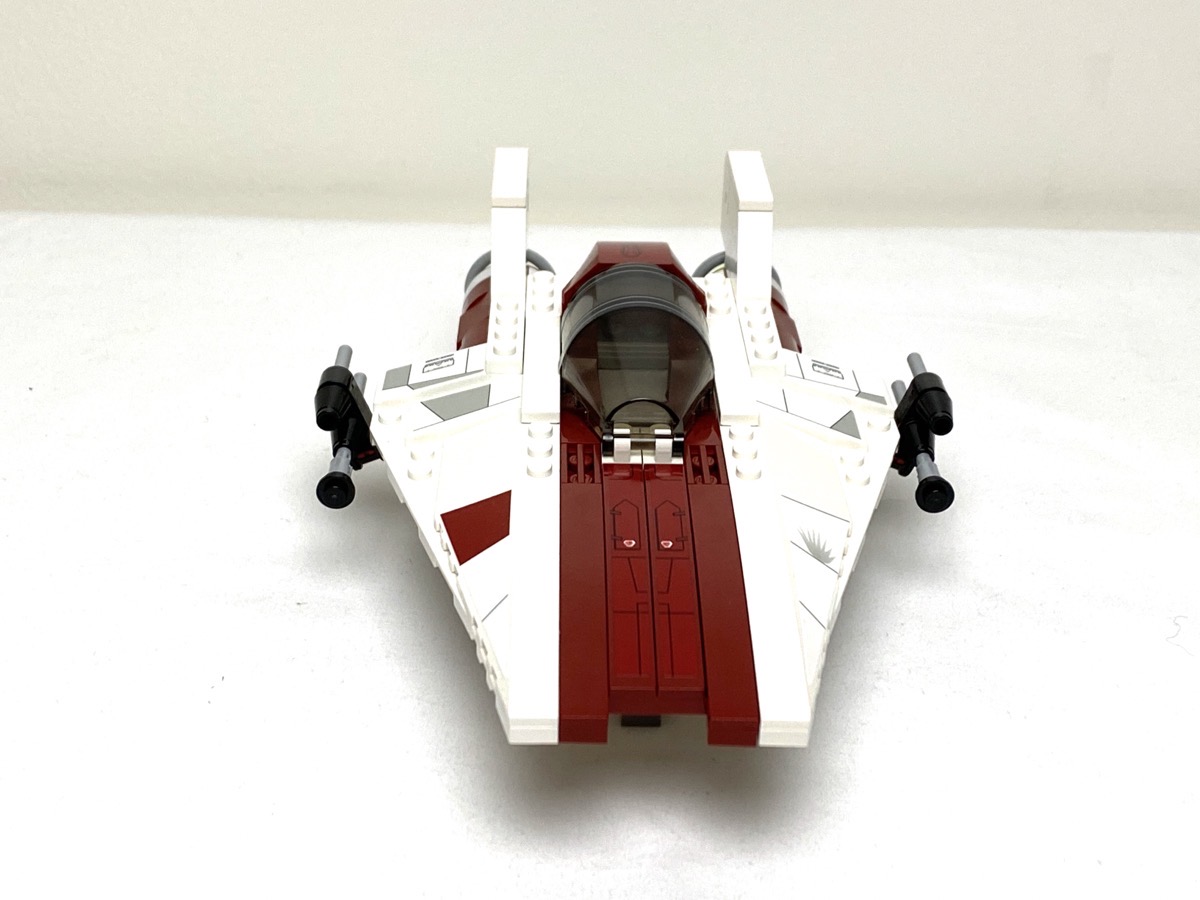 Some of those changes include a much more slopier nose from the long 1×10 slopes. Is that a word? Slopier? LEGO also tried to address one of the biggest failures from previous versions of the A-wing and that was to include the notch at the very front. Unfortunately, this is one point where LEGO failed. Here’s the official image of an A-wing lifted from StarWars.com: 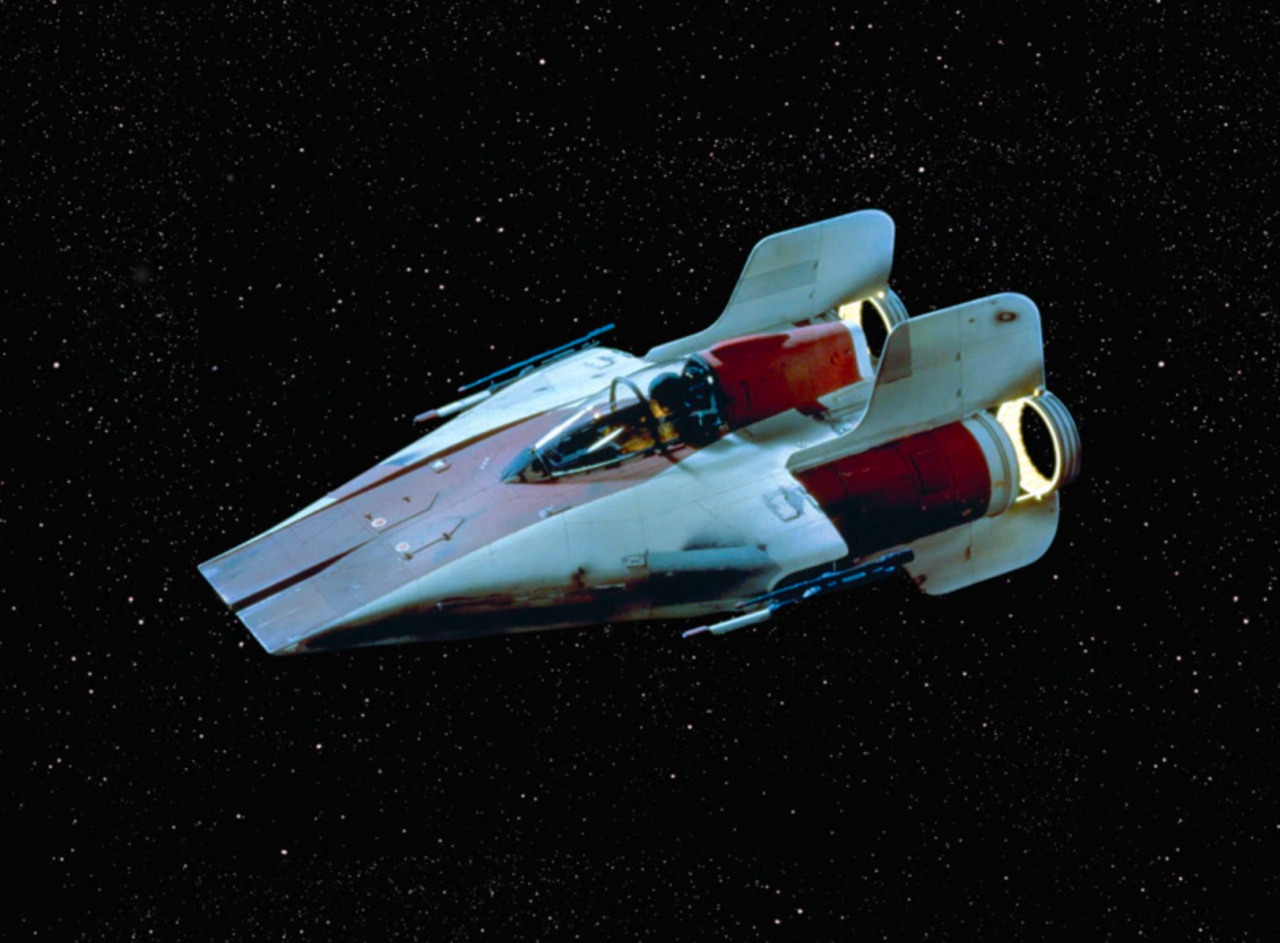 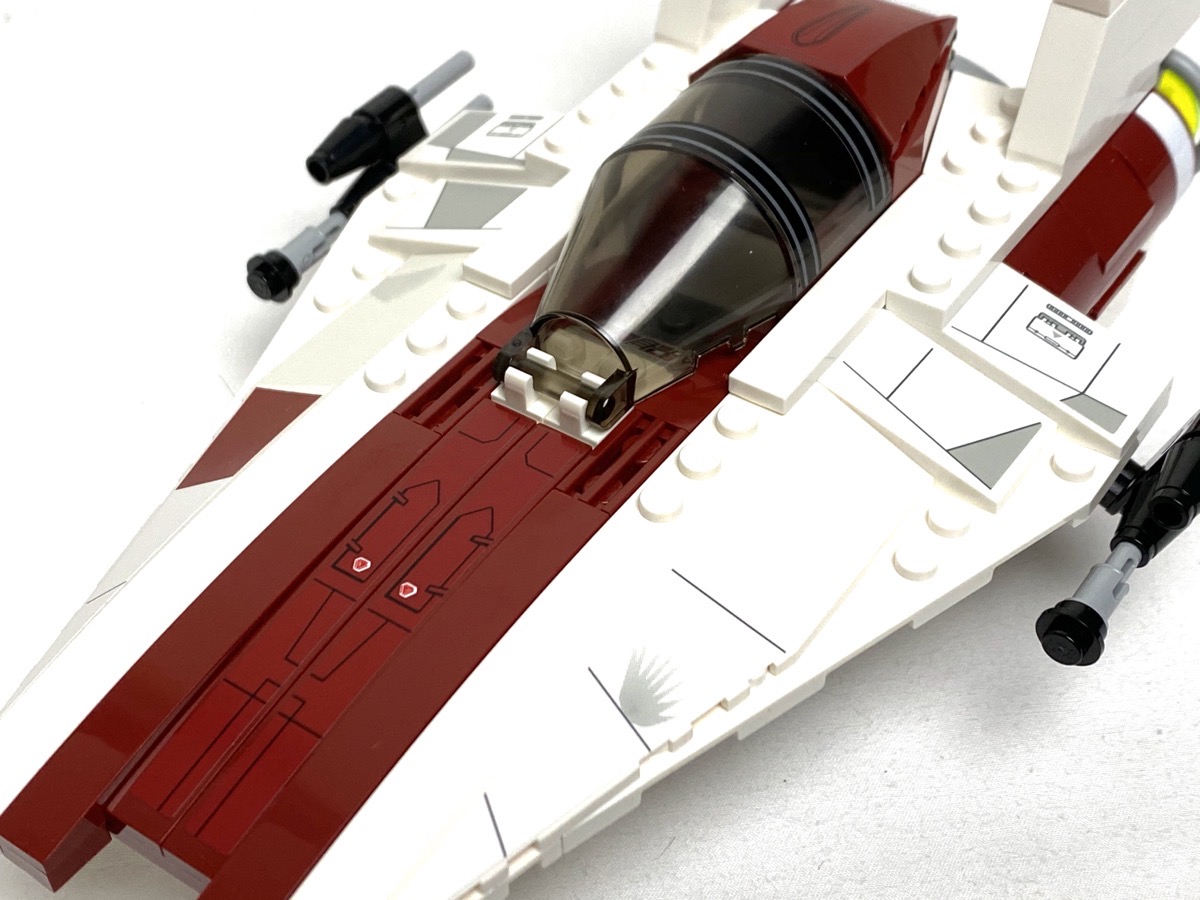 There’s also larger stickers to give it a bit finer detail. I think including more would have been better. The model still feels very stark. I did like the two stripes going over the canopy though. They are pretty effective in scaling the big hunk of plastic down to make it look like separate parts that were bolted onto each other.

The guns on each side are slightly different and on the newer model they are in a fixed position and don’t rotate; this might be the only step back as it is no longer accurate to the source material. Plus, they’re flick fire missiles which are just terrrrrible. 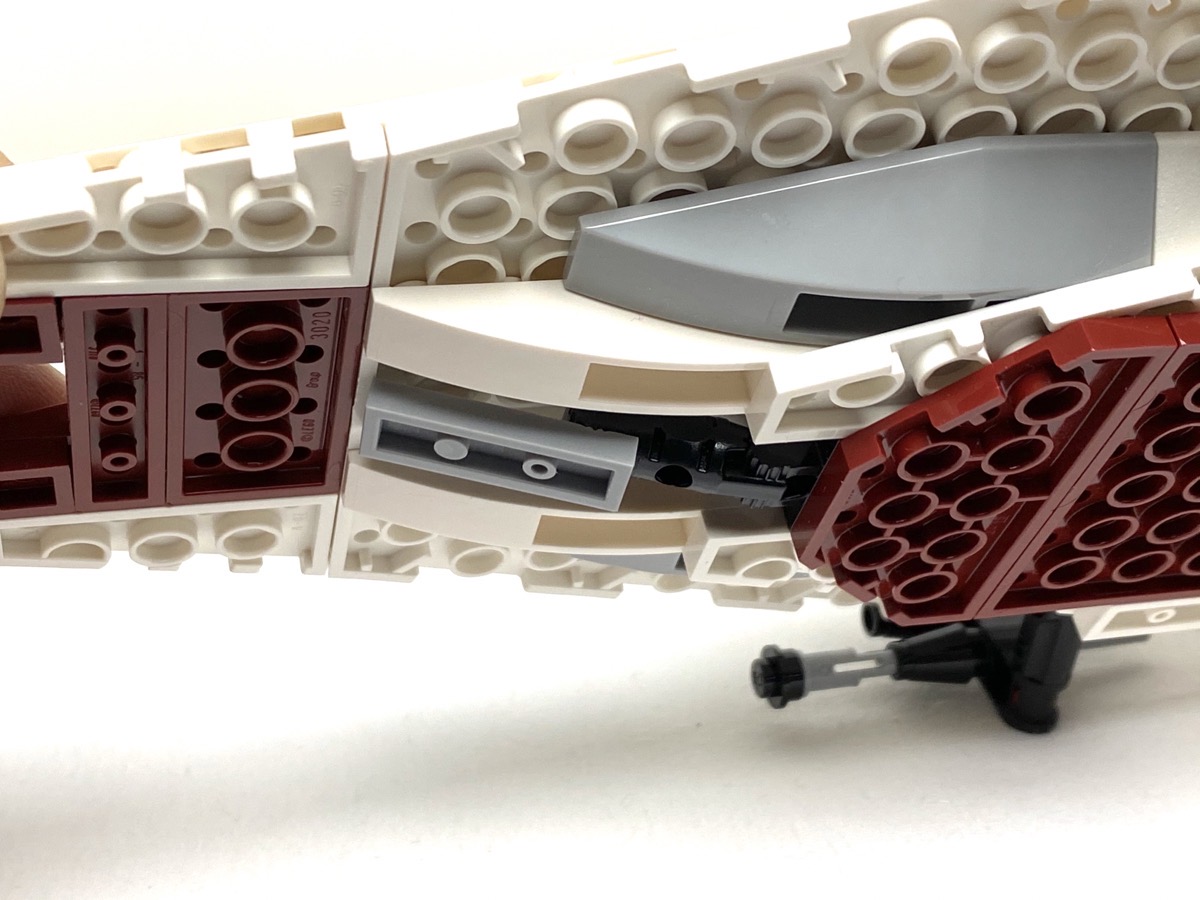 The front landing gear is actually pretty well integrated into the model now so that if you wanted a sleeker, in-flight look while swooshing it around you don’t have this awkward piece you don’t know what to do with after you detach it. It folds up and tucks away neatly following the curved slope of the body elements around it. 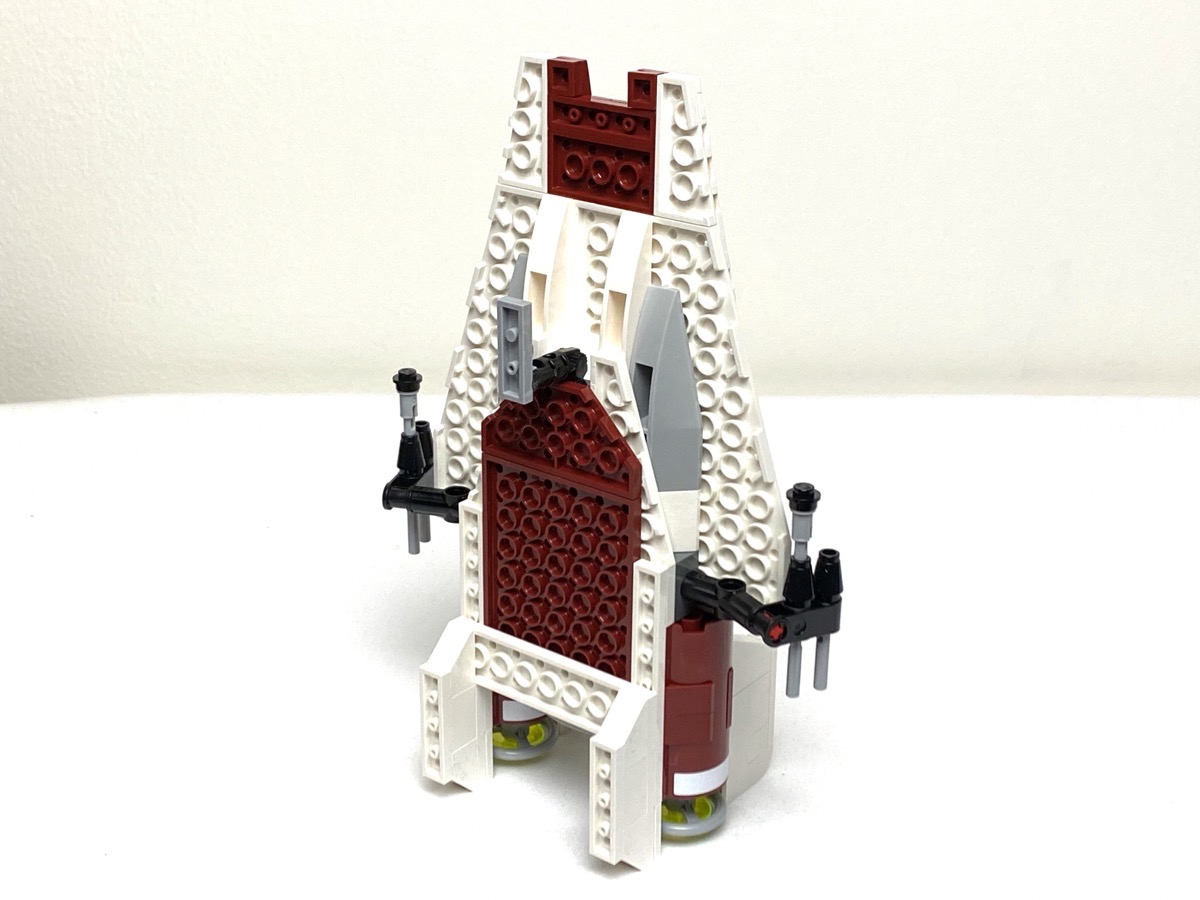 The bottom, like most LEGO Star Wars ships, seems to have just been ignored as it is bland and lifeless. You can get a good view of the oversized notch in the nose. 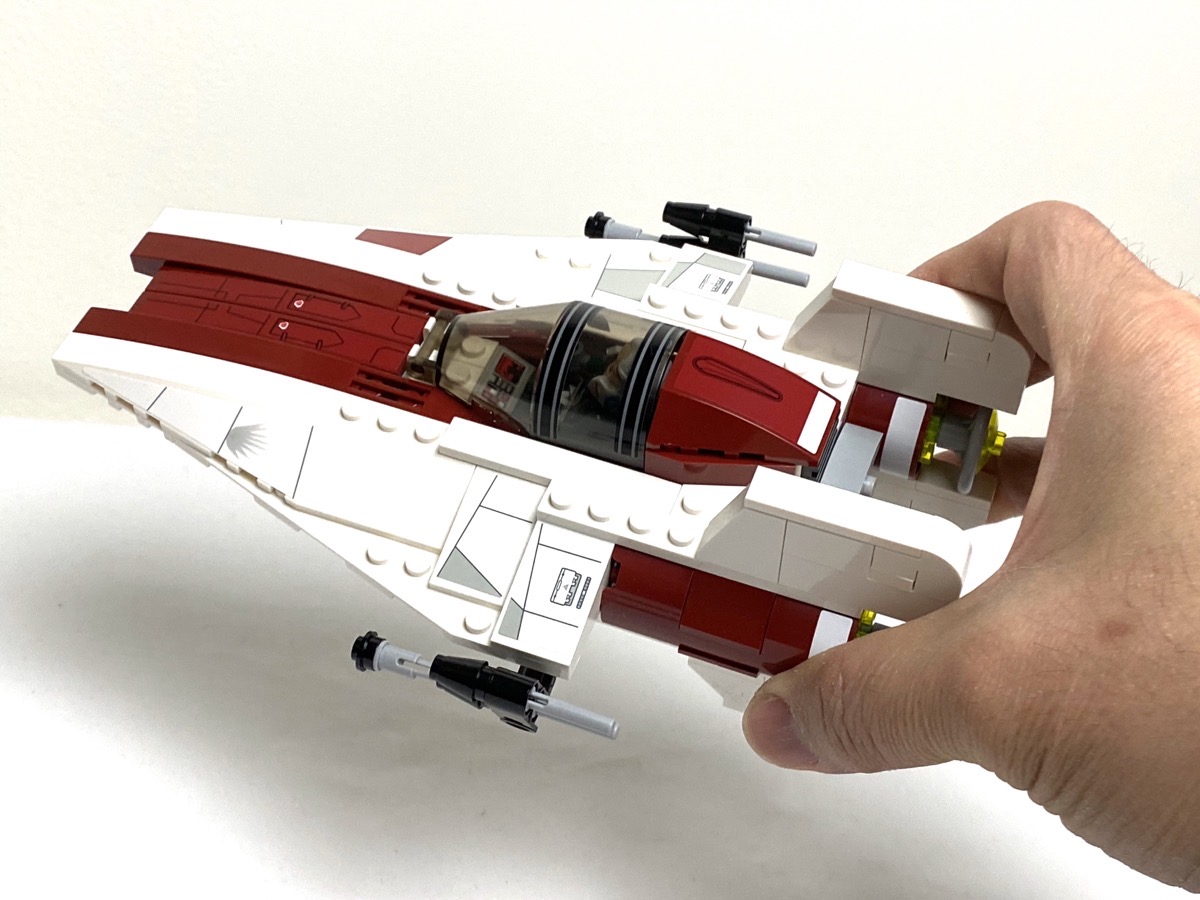 You can grip the A-wing model on its two Star Wars engine elements with one hand and with the landing gear retracted, makes for a very swooshable model. If we were still using that as a metric, I’d give it a 10 out of 10 for swoosh factor.

The Minifigs of 75003 A-Wing Starfighter 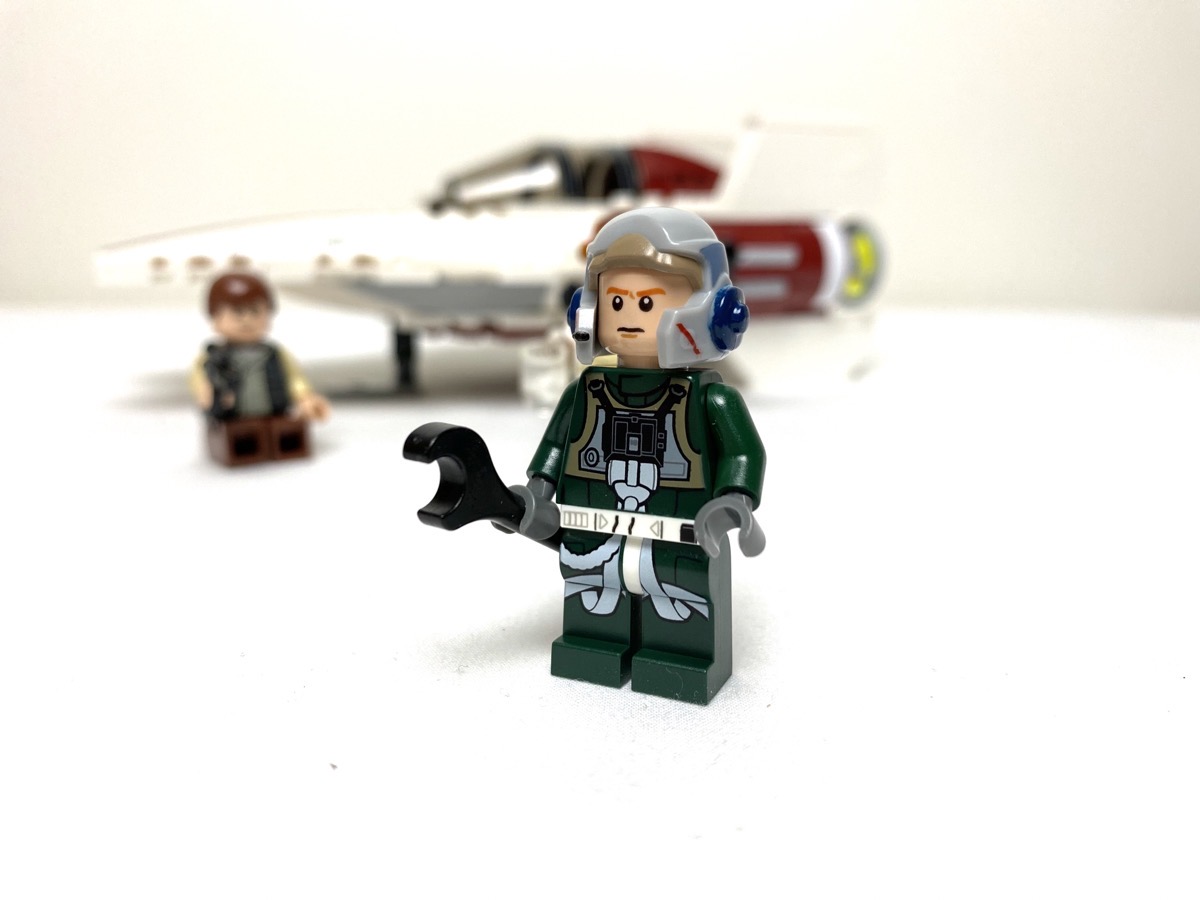 You literally get a mix of minifigs in this set: the obvious A-wing pilot, Han, and Admiral Ackbar. The latter two only included since they appeared in the same movie as the set is based on.

The pilot has a determined expression and a scared “I might not make it to the bathroom in time” expression. The white straps contrasts nicely against the dark green flight suit.

Dat helmet dough. The helmet is just superb. The microphone on the right cheek guard is molded and protrudes out from the surface just slightly. The fact that we got a brand new helmet element made for the pilot kinda blows my mind. This is the first time I’ve handled this A-wing pilot and I must say it is the shining star of this set.

Han is the Endor version and comes with his trusty blaster.

Ackbar is outfitted with a coffee mug. Ackbar seems like he’s smiling doesn’t he? 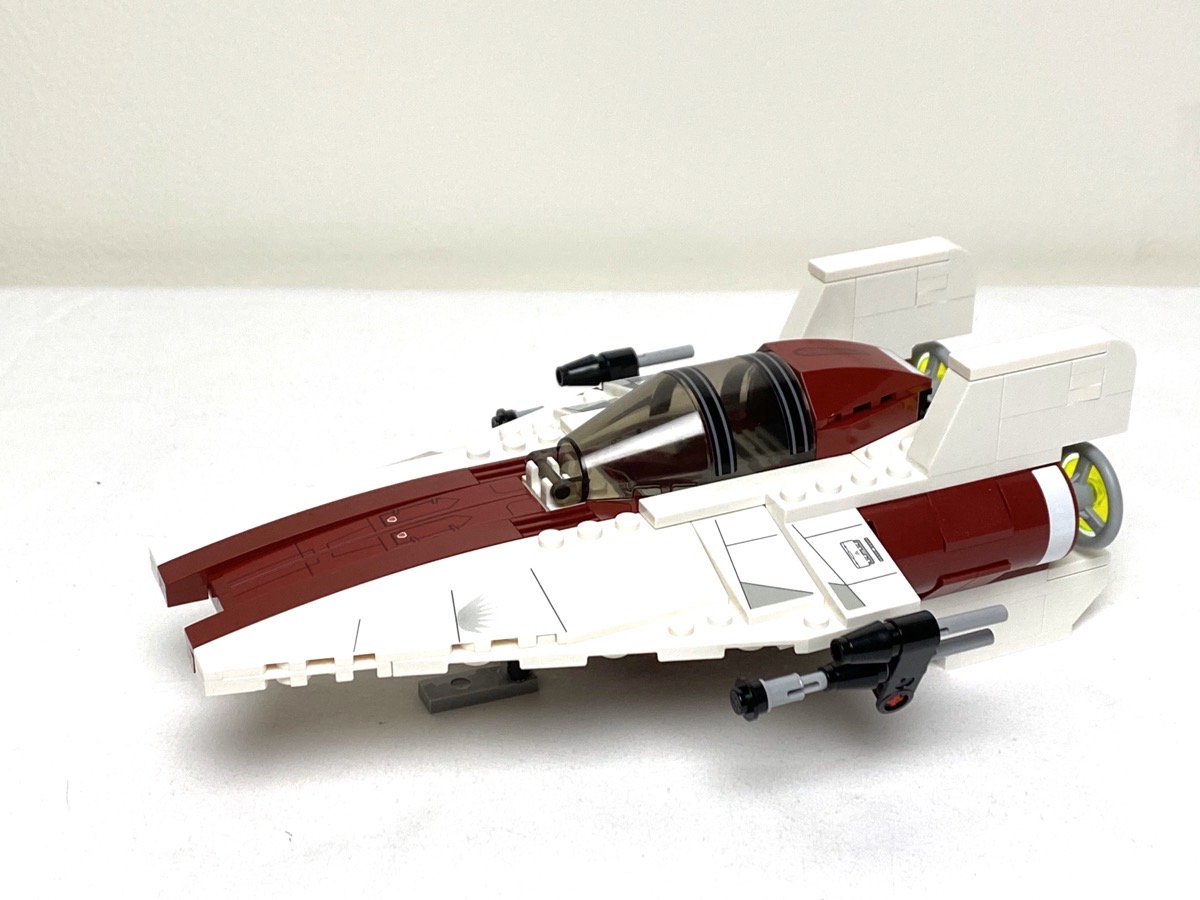 I still like the A-wing as a ship and 75003 A-Wing Starfighter is a fine entry. With 6 years in between releases, I can see why LEGO re-released the set. There are enough improvements in both the model and the minifig selection to not make you feel like you wasted your money if you got the 6207 version. Overall, 75003 A-Wing Starfighter scores a 4 out 5 stars. It’s the same as the previous model. Even with the improvements detailed in this review, there are still a few missteps that prevent it from getting a perfect score. But let’s not focus on that, 4 out of 5 stars is more than enough for us to highly recommend buying this set at MSRP at the time of its release. Now though, not so much because the prices has gone up.

Unfortunately, because it’s been so long, you can’t buy these at MSRP anymore but if you’re so inclined, Amazon has some via third-party sellers. 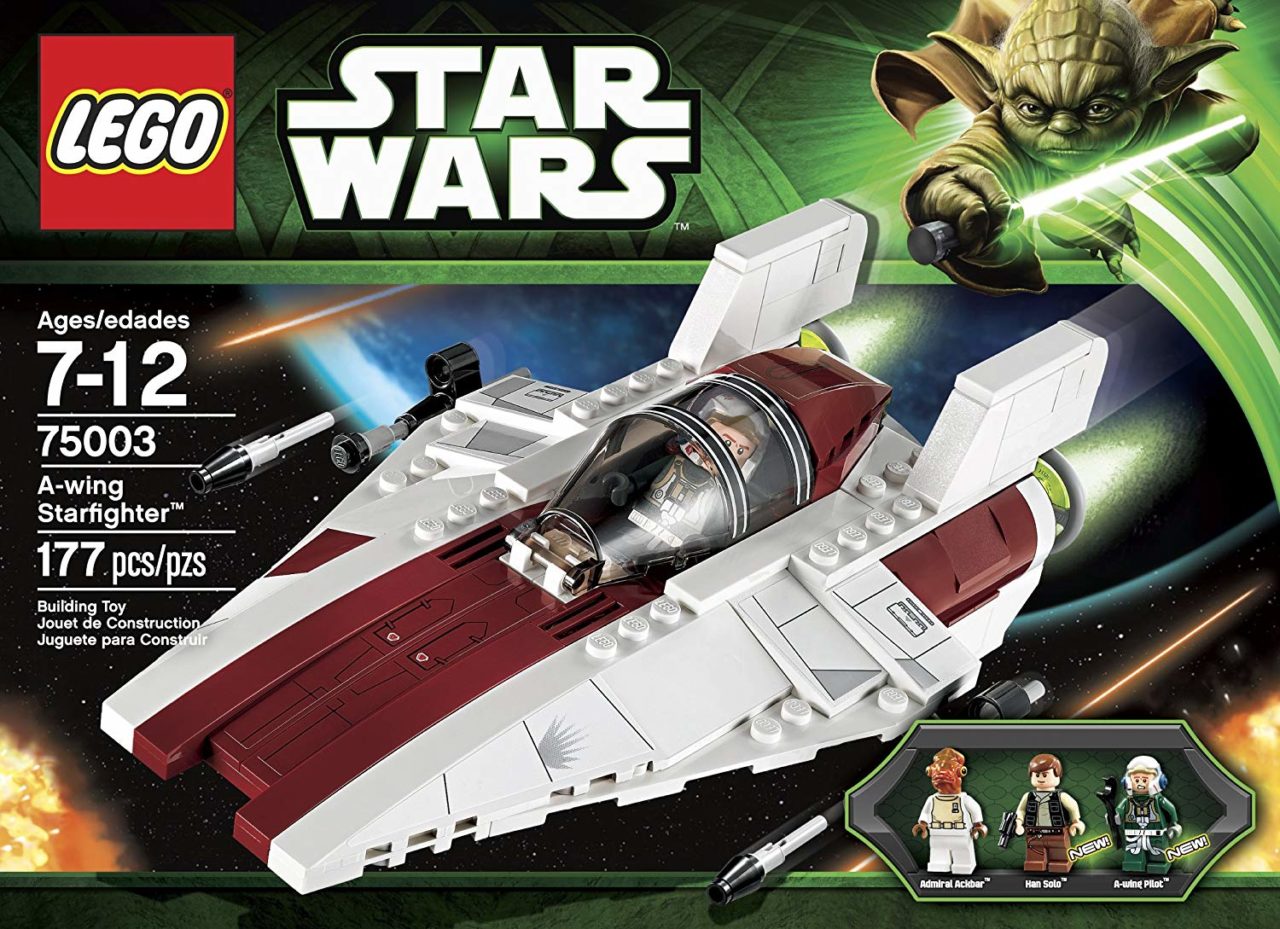 LEGO did not provide a copy of this set and should you click on the the image above or the Amazon link, FBTB will make a small commission if you decide to buy anything.

Oh yes, with room to spare.