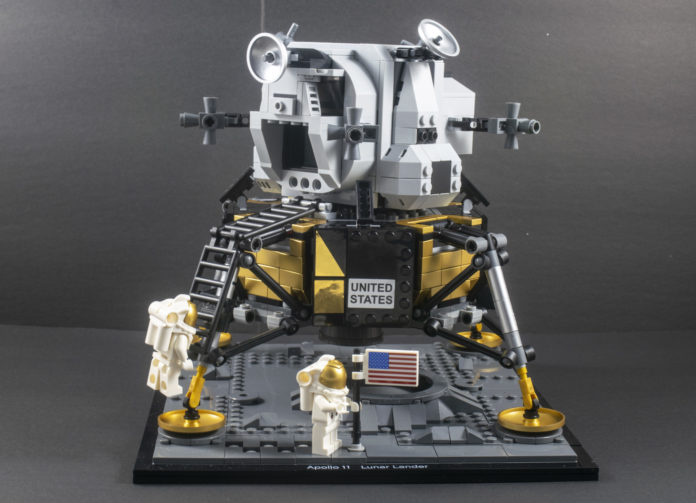 50 years ago, humanity made a small step for [a] man, and a giant leap for mankind, and did something that is still perhaps the single greatest feat that we have managed to date. It wasn’t a singular achievement, the work of three astronauts, it was the work of hundreds of thousands, cost billions of dollars, and represented a nearly singular effort that the United States, or really anyone, has been able to achieve before or since.

I have always had a fascination with astronomy and the space program; the first books I remember reading were about our solar system, I did school projects on things like Skylab and Apollo-Soyuz… I even owned a record about the launch of the Shuttle Columbia (it was awesome, and had a great art pressing). My daughter is getting to the age where she is getting into this sort of thing as well, and I am going to encourage it every chance I get.

When it came to LEGO’s 10266 NASA Apollo 11 Lunar Lander, which came out a couple of months ago and sat under my my desk waiting for me to build it, it meant building it together while watching the NASA upload of the first moonwalk on YouTube. It’s three hours long, and we only got through the first third before finishing the build, but still, totally worth watching. It bent her mind a little bit, because “it was so hard to see,” and she didn’t seem to buy my answer of “it was fifty years ago” as a good enough explanation. Kids these days…

I’ve mentioned before about how I was far more into “real” space stuff when I was a kid, instead of things like Classic Space. That doesn’t mean I wasn’t building space stuff with my LEGO… I absolutely was, it was just stuff like my own lunar landers or what a kid’s idea of the Voyager spacecraft looked like (I did those more with Construx than LEGO, though). That nostalgia hit me hard when this set was announced, and for the first time in a very long time, I knew I was going to get a set based on the design alone. I’m not sure if I was disappointed or surprised when I got to the 1087 piece count and $99 price tag. I mean, it’s not terrible, but also feels a bit light for a set that much.

There have been several different sets based on NASA properties before, including multiple lunar landers (565, 7468, 10029), and more recently, the Shuttle, Saturn V Rocket, and the Curiosity Rover that sixteen people were able to purchase… but there is something special about this one. Maybe it’s the 50th anniversary, or the overload of gold parts and attention to detail in the set… or maybe it’s just that the set was clearly made as a display and conversation piece.

I obviously don’t build a lot of sets these days, but I’d be hard pressed to remember a set that I stopped so often to just marvel at the methods of how it was being built and put together. In short… this set, while repetitive, was a joy to build. I’ve been critical of sets that felt like they felt more like a machine put them together than a master builder (though some of that could just be how CAD-done the instructions are these days), but this set just feels like a marvel of Engineering in a unique LEGO way.

The landing struts are a perfect example of this, where the solution feels like leaning into LEGO as the medium, and the technic pieces just… work. Even the studs facing out feel like they are in place and right, the swivel of the dishes (which were meant to swivel to fit around rocks and debris… though in the actual lunar lander had landing probes that extended another five feet below the probes to indicate when they were in proximity to the surface and visibility was obscured by dust). It’s hard to describe, honestly, it’s something that has to be experienced. This is just a set that hits that sweet spot between its inspiration and LEGO. That’s been rare in the last few years.

There are some fun little details to the build, though for the most part, this is a display piece more than it is a playset. The camera mounted on an underside panel of Apollo 11, one of many different TV cameras used (though the original tapes of it have been lost). When watching the video I posted above, the first 20 minutes before Neil actually stepped down were basically a lengthy AV check to make sure it was working, and several times later on after they move the camera away from the lander, there were frequent directions for both of the astronauts to move into frame.

The underside isn’t flashy, which is to be expected… but seriously, look at all of those gold plates on the bottom. The underside of the actual module was covered with the same foil, but obviously, that would have been fairly costly (if not impossible), to put into a set. Because this set is made more for display than to play with, you’re probably not going to see that detail. In addition, the landing pads are designed to be positioned so they sit on the base, which means that if you turn them even a bit, they’ll sit off-kilter.

The inside is simple and cramped, and you can barely position the two figures inside. The door is also a little bit annoying, since there’s nothing stopping it from opening should you bump it open while everything is together. Also, technically, it should have been a single door, though it did open inwards on the lunar module (after the Apollo 1 accident, the door on the command module opened outward).

The shape for ascent module is pretty good, but one of the funny things is that it’s built so sturdy and solid. The connections work well, and that’s a bit ironic, given that the actual lunar module was an incredibly flimsy device built to be as light as possible. Most of the foil and insulation was just taped in place, not fastened or bolted down. The little RCS thruster assembly sticking out of each side is a great as well, and another spot where the LEGO part just works.

The minifigures in the set represent Buzz Aldrin and Neil Armstrong. Poor Michael Collins doesn’t get any recognition in the set, which is a shame. I would have loved a bigger set that also included the command and service module and gave us the full crew. While all of the focus is on the moonwalk itself, the overall mission should be recognized, and Collins had perhaps the most important, and stressful job, in sitting above, coordinating, and recovering the other two when they came up. I kind of hate seeing his part is so often forgotten. I’d be willing to bet that most people could name the two who landed on the moon, but would be hard pressed to remember him.

The base has a big crater set up in the center, with four smaller ones that the landing struts set on top of. It just sits in place, never connecting or locking in. It’s a fairly basic base, but it works. The only printed part of the set is the naming tile on the front; every other part is stickered, though interesting, it’s printed on a foil backing, similar to what you get in a lot of Friends sets.

I’ve mentioned it a few times, but this is very obviously designed as a display piece more than a play set. Can it be played with? Sure. My daughter is proof of that… while I was building the more complex struts, Neil Armstrong was stranded on the moon and trying to figure out how to get to Mars. After that she grabbed the base and started to walk circles around my desk before explaining that the desk was Earth and she was just making sure the moon was orbiting correctly.

In the end, this set is hard to describe. While I can come up with quibbles of what I would have loved to see… like more foiling around the landing struts, a command and/or service module, and seeing Michael Collins included in the set. When you compare it to the Saturn V, which ran $20 more but included almost double the parts, it’s hard to say that there value is there, given that both are still readily available.

Yet… this set was simply a joy to build. There was so much to the method of it, and in some tiny way, you just feel a connection to it. Maybe it’s that small but of childhood that comes rushing back when you use a LEGO astronaut to plant the flag, or reading the quotes on the box or the information in the instruction book (about half of the instruction book is made up of trivia and facts in a few different languages). This was the most fun I’ve had building a LEGO set in years, and it’s going on my mantle as a display piece. I only have a couple of LEGO sets put together for display, and this one is good enough that it deserves to be shown off. The experience alone justifies the price, and while I can come up with things I wished were different, none of them bring me lower than calling this a solidÂ five out of five.

You can, and absolutely should, buy 10266 NASA Apollo 11 Lunar Lander at LEGO Shop@Home. 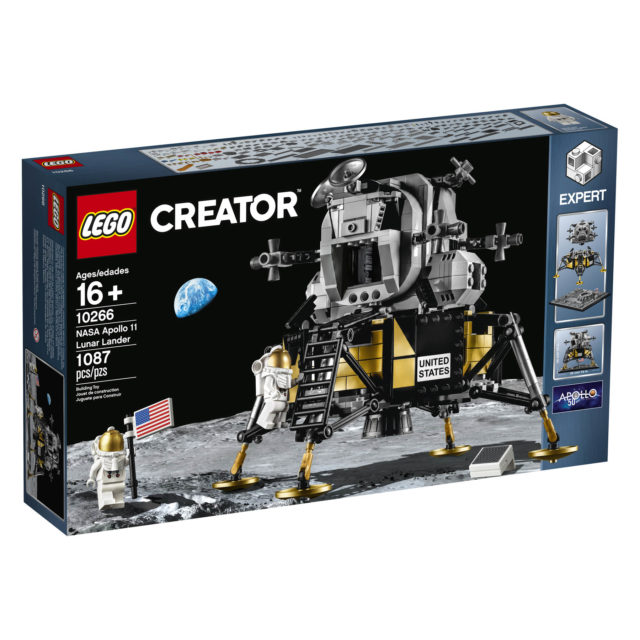