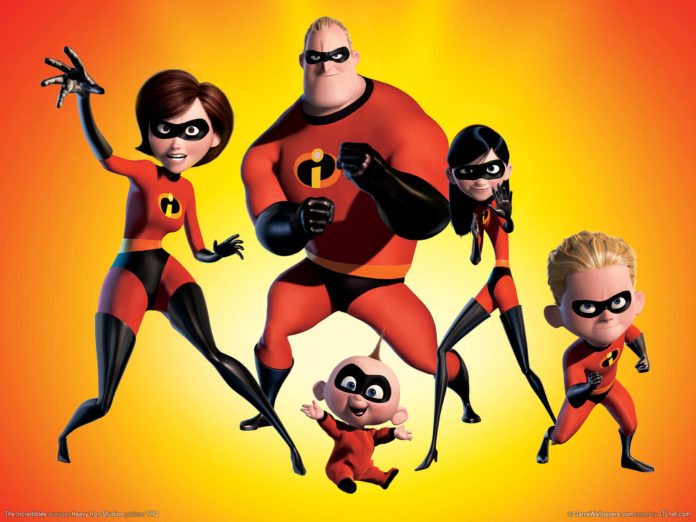 This review of Incredibles II will be part recap, part review, and all spoiler-free. I can’t say the same for the comments section, as I will be putting some spoiler-y stuff there, so be forewarned.

Fourteen years. That’s how long it’s been since the release of the first Incredibles movie. And the small snippet that played before the movie started had the Holly Hunter, Samuel L. Jackson, and Craig T. Nelson remind us of this fact. To paraphrase, they said that we waited 14 years for a sequel because Pixar wanted to do it right and that it was worth the wait. They were not wrong.

While 14 real-time years have passed between movies, the sequel picks up exactly where the last movie left off with the appearance of the Underminer and the Parr family donning their domino masks. The Parr family springs into action. Despite their family’s new roles as a super hero family, Mom and Dad’s parental instincts kick in and delegate tasks to their kids, Dash and Violet, that are safer and keep them away from the center of the action. Violet actually gets babysitting duties to watch Jack Jack much to her chagrin. This is kind of an important moment as it comes into play much later in the movie.

But despite the family’s good intentions of saving the day and preventing the Underminer’s driller from ruining city hall, the public only sees the aftermath and the damage that their heroics caused. A bank was still robbed and there is property damage galore. Super hero fear is still alive and thriving and this incident does not help matters much. The government agency that was responsible for cleaning up, Pixar’s version of Marvel’s Damage Control, steps in once again to relocate the Parrs and, since supers are illegal, we find out that the agency is being shut down completely.

Enter DevTech, a multi-million dollar company set on restoring the good name of super heroes and the work that they do. With most of the more popular supers gone thanks to Syndrome from the first movie, Frozone, Elastigirl and Mr. Incredible are given an opportunity show the world what happens from their point of view. The public tends to focus on and react to the end result, and this is true going all the way back to the first movie. DevTech’s goal is show that while the ends may not be desirable, the means to get there are always coming from a place of good.

Which, now that I think about it, is the motivation of any super type, good or bad. The bad guys, the well-written bad guys, the smart ones that leave an impression on you, never see themselves as the bad guys. They always try and do what they believe is right, but the means to get there are almost always bad. Hence why they are cast as the bad guys. This holds true for Incredibles II as the bad guy’s motivation, in their point of view, is justified and what needs to be done.

We see this exact thing happen with the main villain of the movie. Despite DevTech seemingly succeeding in restoring the good name of supers, the underlying plot plans to ruin all of that progress and turn triumph into tragedy. At a historic event set on a boat (you know bad things will happen once you’re on a boat), leaders of the free world along with a super from their country assemble to sign a document making supers legal again. The villain strikes immediately after the signing and broadcasts an ominous message that now that supers are legal, it’ll be survival of the fittest, pitting supers against regular non-super humans (this is the only part I have an issue with and will be discussing in the comments). And that boat I mentioned was set on autopilot to crash into the city.

Of course this doesn’t really happen (spoiler alert). The Parr family (including Violet, Dash, and Jack Jack), Frozone, and a couple of newcomers, all work together to save the day in just fantastic fashion. The final climax of the scene had me so worked up that I had to fight the urge to stand up and give a standing ovation once everyone was safe. Though, once the credits did start rolling, the entire theater I was in erupted in applause. I can’t remember the last time something like that happened. THAT’s how good the movie is.

There are two things I’d like to highlight that were really entertaining for me: Elastigirl and Jack Jack. One of the best things about the first Incredibles movie was Elastigirl and how the writers imagined how she would use her powers. Everything from swinging through the city like Spider-Man, to flinging a manhole cover at the Omnidroid, to forming into a dinghy to serve as a life raft for her two kids, it was all just inventive and smart. The same holds true in Incredibles II especially once she gets on the Elasticycle. Being made of rubber holds so many possibilities so anything that you think she can or should do, she actually does and more.

Now the thing with Jack Jack is that we, the audience, got to see his powers manifest itself at the end of the first movie, along with the animated short, Jack Jack Attack. But the rest of the Parr family did not. So we get to see them discover his abilities and how they deal with it. Jack Jack was also the reason to bring Edna Mode back. It’s all quite entertaining. Jack Jack provides the comic relief in a mostly serious movie. His powers are wide and varied and whenever he appeared on screen, there was this sense of excited anticipation of “what’s he going to do next?” Because you were almost guaranteed that he’d make you laugh.

Fourteen years was a long time to way for a sequel. Back then, it was never guaranteed that a sequel would be made. But at the time that it came out, I distinctly remembering saying, “If there ever was a movie that deserved a sequel, it’s this one.” It wasn’t until 2014 that a sequel was announced. Four short years later, here we are enjoying one of the best animated movies I’ve ever seen. The last couple of Pixar films were just okay in my book, mostly forgettable affairs that I couldn’t really recommend paying theater ticket price to see in a theater where the chances are high of a crying toddler or two being in attendance (yeah, that happened at my showing and THAT was fun. What is up with parents thinking its okay to bring a baby into a movie theater? And what is up with those parents that don’t take the baby outside once the crying begins? I mean, come on, be considerate). I was wondering if Pixar had lost their touch. Incredibles II is such a stellar movie, it reminded me, heck it reminds everyone, the whole world even, why they are a wold-class movie studio. I did nothing else yesterday except watch Incredibles II. This is how I spent my Father’s Day. I enjoyed every minute of it and I couldn’t have asked for anything more.