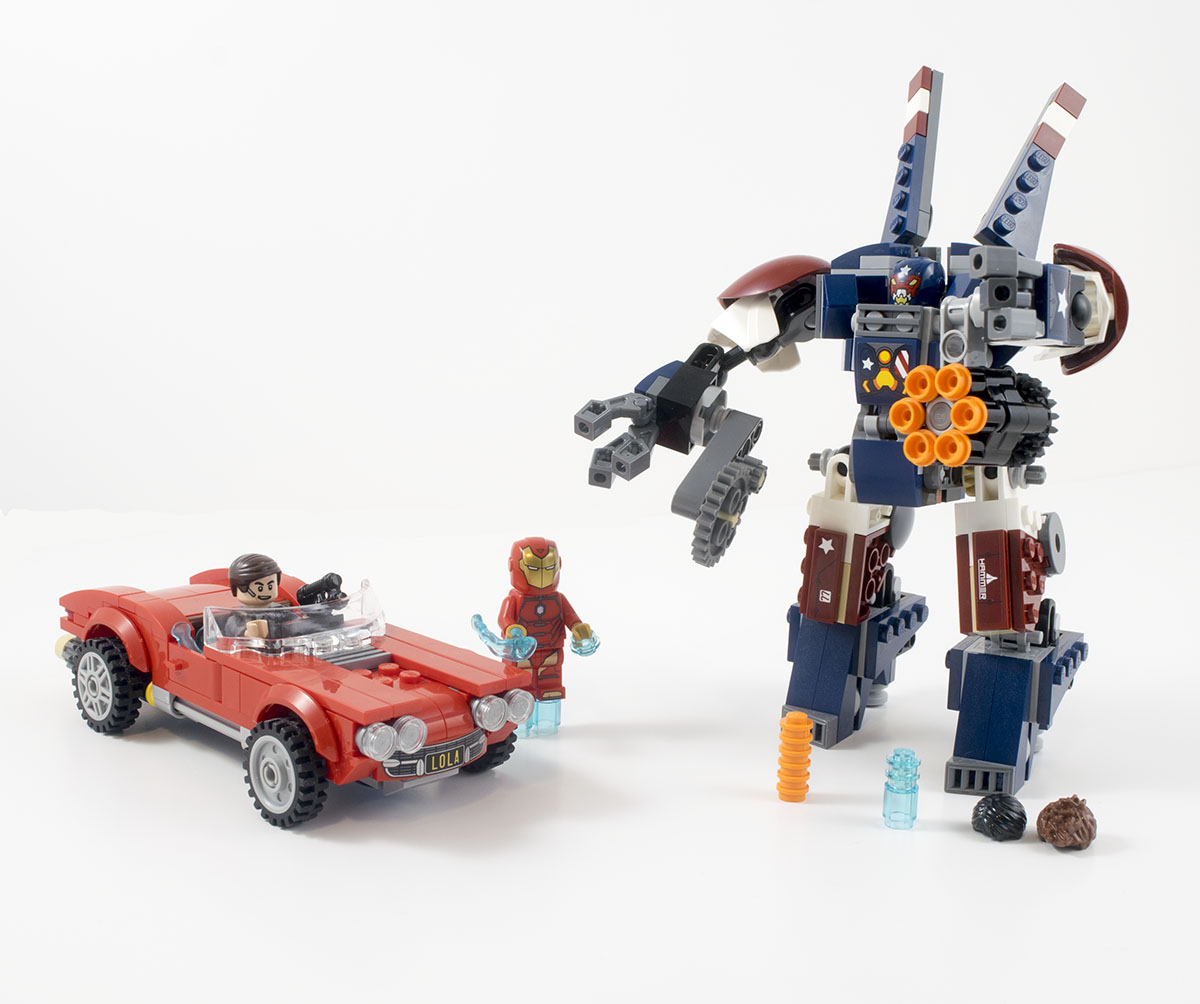 I’m going to be honest… I had very little idea what was coming up for the 2017 Marvel lineup outside of Ms. Marvel. In recent years, I’ve avoided most of the spoiler-y information around sets. There’s something nice about wandering into the store, seeing something, and going “wow, that looks cool.” It’s fairly rare in our modern world of all leaks and spoilers all the time to get something like that. Of course, sometimes that policy ends with Ace laughing at me because I had no idea there was a LEGO Batman Dimensions fun pack featuring Excalibur Batman until yesterday. Literally.

This set was one I only knew the name of before it was shown off at Toy Fair, and once I saw the pictures, I knew I was going to buy it just because I wanted an Agent Coulson minifigure. While there’s certainly been a lot of movie-to-comic influence in Marvel stuff (movie comics from MCU invariably end up in the comics eventually), Agent Coulson has been a lasting addition after he was introduced in 2008’s Iron Man. From there, he was in Phase 1 movies (notably ending in Avengers), television (Agents of SHIELD and the Spider-Man cartoon), and now into comics.

Coulson is pretty much the reason that I’m reviewing 76077 Iron Man Detroit Steel Strikes and its unnecessarily long name; it comes with 377 parts and a nice $29.99 price tag. We get two brand new characters in Justin Hammer and Coulson, and a brand new version of Iron Man that includes his hair. I remarked how odd the mixture of sources was in the Ms. Marvel set, but I’m not sure it has anything on this weird mashup of cartoon, movie, and made-up stuff. Still, it’s got Lola, so maybe this “yet another mech” has something going for it. 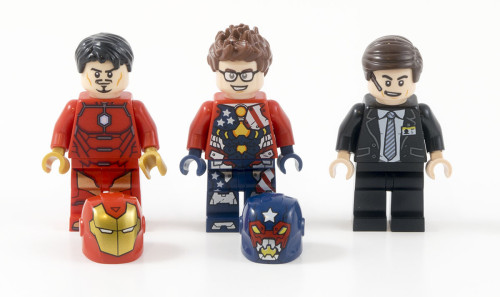 We get three minifigs and two more of the “we are going to use this part in everything” helmet that Super Adaptoid also had. 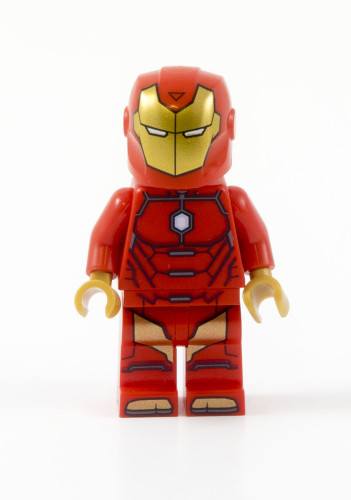 I suppose we can at least say that we got another Iron Man, but something about this figure just feels off. It’s not the new helmet, that just looks kind of terrible with the faceplate printing, it’s something about the quality. The entire figure feels like it’s too light, and I swear that after I put him together, I picked up the box and made sure I didn’t somehow buy a knock-off set (seriously, I picked it up and commented about it almost immediately in our chat room). It would have been especially impressive if it was a knock-off, since I picked it up at a brand retail store. 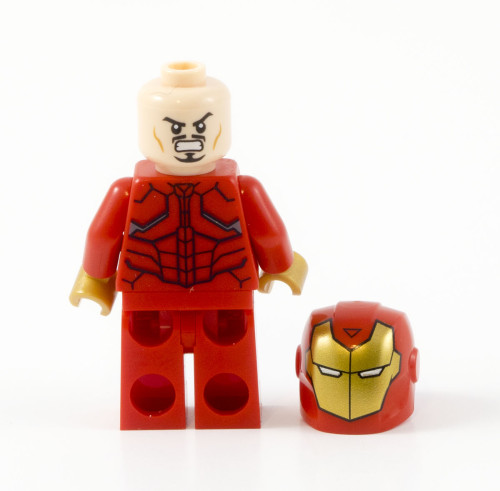 It’s hard to articulate the problem with the figure. I made a similar comment about Ms. Marvel, but at the time, I thought that was more to do with her special construction, but now I’m not so sure. Nothing about it looked much different compared to, say, one of the CMF figures or any of the small pack figures, but this just feels like it’s made of a cheaper plastic. I don’t have a scale sensitive enough to get the difference between it and a standard figure (or even the Justin Hammer one, which didn’t have the same feel), but hopefully others that have the set can tell me if I’m crazy or not. 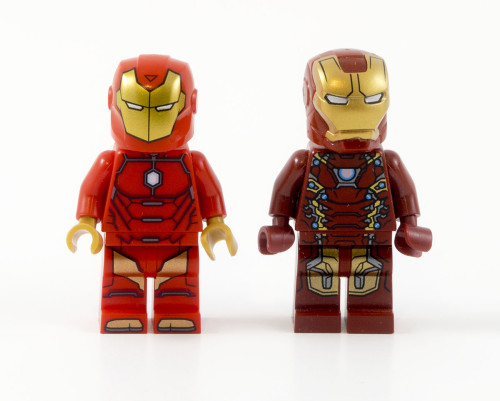 It’s weird to think about how controversial the Iron Man helmet was when it first came out… it never overly bugged me, since the Batman cowl had set a standard for oversized head gear already, but I get why some would want something a bit smaller. That being said, I’m not sure this was the answer, since it’s still big and we lose the opening feature of the old one. The new figure also takes a big step down, printing wise, from the earlier figures, and I’d like to say I welcome the more traditional color… but I wasn’t that big of a fan of the original comic suit in the first place. 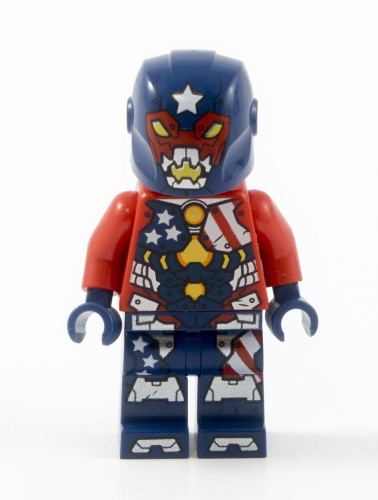 I’m sure I’ll get corrected in the comments, but I have absolutely no idea where this Justin Hammer design is from. He appears as a younger guy, similar to Iron Man 2, in Iron Man: Armored Adventures and Avengers Assemble (and actually is responsible for the Super Adaptoid in Avengers Assemble)… but I’m not exactly sure when he decided to go performance piece on what would happen if Sgt. Slaughter and Hulk Hogan would have collided at the height of their popularity in the 1980s and turned into a neutron star, but here we are. 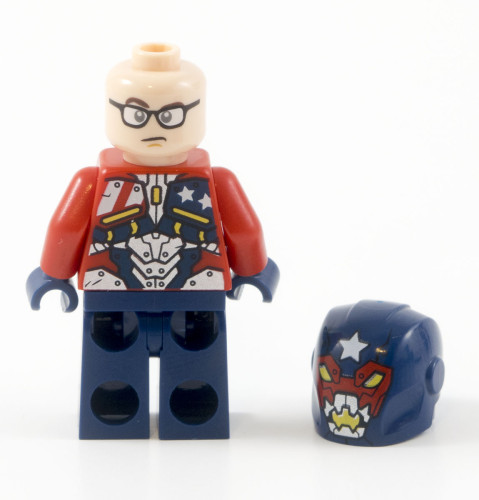 Like Tony, he comes with his hair, and for me, the figure is really here for the head so I can turn it into a proper figure (I’m thinking of using a Bruce Wayne suit torso from the 2nd Batcave set). Tan or pinstripes would be better, but the powder blue suit also works. The drop-in comic depicts him like this version of Hammer is on the run and living in Krieger’s apartment lab, just building mechs to go after Iron Man. It doesn’t make much sense, since that’s never been Hammer’s MO. 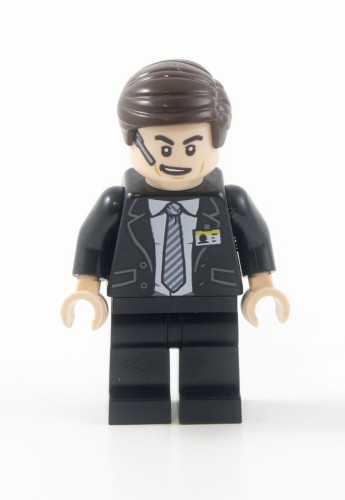 Coulson is an interesting mix, though to be honest, he could just be seen as a generic agent minifigure. I think the problem here is the hair, at least on this one. Clark Gregg has always had a short haircut style in his marvel appearances, almost approaching a bald look at times, and the hair is just far too long. I would have gone more for hair like Tony’s, or just the classic style, but that’s me. Still, that suit jacket and tie are pretty great. 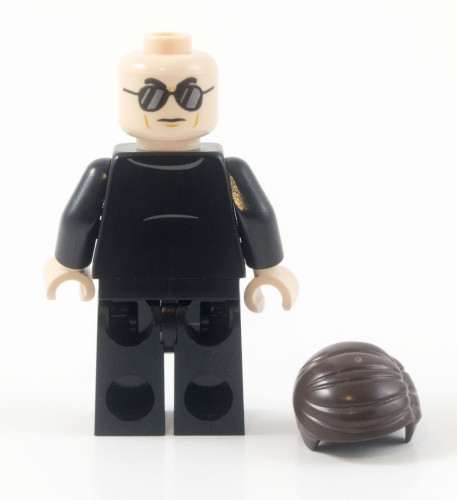 The alt-face would make a pretty good Agent smith face, if you were so inclined (just in time for the remake), but it’s not a bad Coulson either. I kind of hope this means that maybe we’ll get the rest of the team in future sets, but I’m not sure if they’ve had any lasting appearances in the cartoons (if at all). Still, he’s a nice figure to have, and generic enough that you could turn change up the figure nicely. 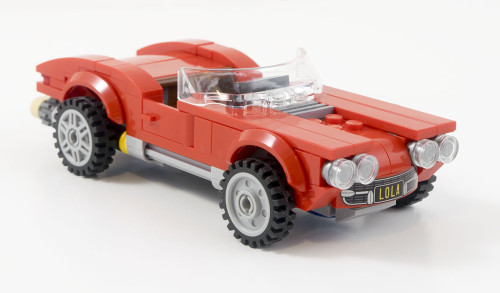 For those who haven’t watched Agents of S.H.I.E.L.D., this is a pretty direct call to the show, which appeared in the first episode. It’s either a reference to an ex-girlfriend of Coulson, or an acronym for “Low-Orbit Levitating Automobile,” but knowing Coulson, it’s probably both. In the show, it’s a ’62 Corvette that was modified using Howard Stark’s tech seen in Captain America: First Avenger. 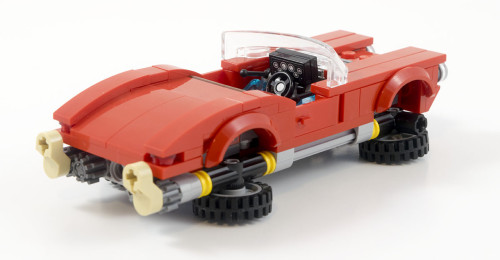 I want to love this car, I really do… it’s actually a pretty nice idea in the show, but sadly, this model is just one blocky mess. If you position it just right, it looks fine, but take a look at that rear angle and tell me it’s still a nice looking build. The front is actually the worst part, with those long plates that kill the line of the build. The extra bulk to turn the wheels together is made worse by the tan technic connectors. The weird part is that this is the second flying car we’ve gotten in Marvel Super Heroes, but it’s worse on almost every front than the Green car we got in one of the early Marvel sets, 2013’s 76004 Spider-Man: Spidercycle Chase. It also should be noted that the earlier car was better and came in a $20 set with the same number of minifigures. 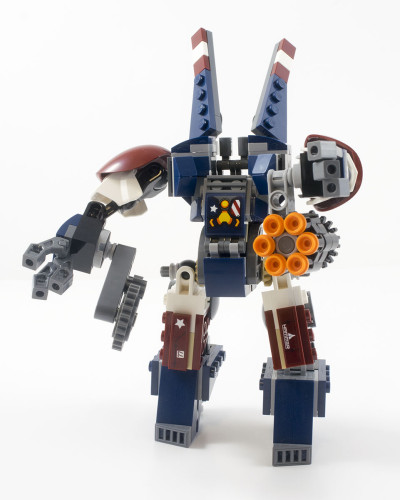 I’ve made comments and/or jokes before about how there are only four sets in the Super Heroes line that are just getting remade every wave (sometimes two or three times in the same wave). I wasn’t looking forward to another mech, but I’m going to admit that this one is actually pretty fun. It somehow really fits Justin Hammer, being overblown and flashy, loaded with weapons, and yet somehow worse than anything Tony Stark is going to make. 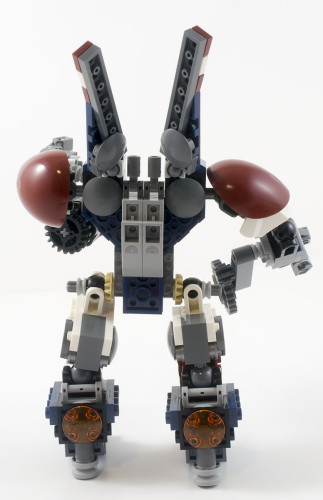 The back is a touch unfinished, which could be applied to the entire set, but there’s potential of making a few changes. I do really like the integration of the shoulder pads, and this is somehow a situation where stickers make perfect sense. Justin Hammer strikes me as the kind of guy who loves to slap stickers on his mechs. 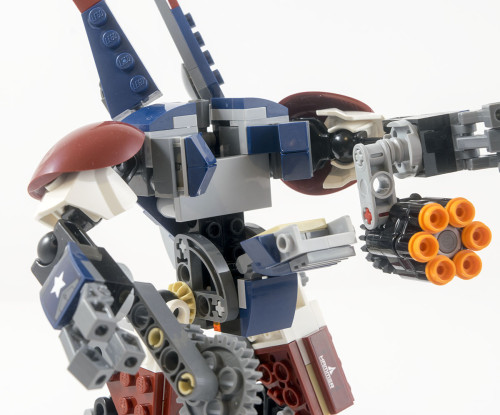 The addition of the weapons on the inside of the arms also fits the motif, and they could be removed if you just want the hands. I’d like to figure out a way to move the rotating turret to his shoulder, to give it more of a War Machine vibe, and I’m wondering if there’s a way to move the saw blade in a bit on the right arm. Still, it’s a good collection for the limited number of parts… I almost wish we would have gotten a more featured mech and had Coulson and Lola moved to a different set. I would have loved to see Pepper added to the set (especially Pepper as Rescue), and we might have gotten a better robot for it. 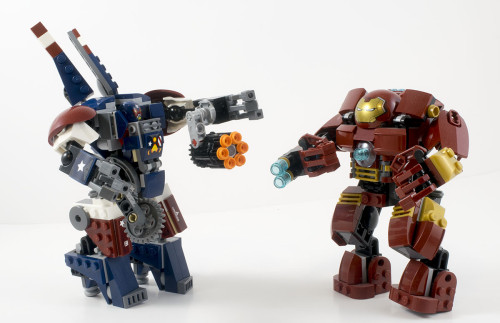 When I was done building the set and put it on my shelf, it suddenly hit me that this is a perfect mech to put up against the Hulkbuster, and putting them next to each other shows how much Justin Hammer is in his mech. He’s a guy capable of building a devastating killing machine… but also so vain and focused on publicity that he gives it an open cockpit with his head exposed. I went from lukewarm on the set to liking it a bit, and suddenly, the mech became the highlight when I put it next to Tony’s armor. My hulkbuster has a more classic figure, though. That red “this thing is awful on the MegaBloks quality scale” Iron Man went straight to storage.

In the end, this is a very hard set to pin down. It’s got a good price, but the fact that it has a car and mech make both of the builds a bit worse. Iron Man feels terrible for quality, but we get Coulson and Justin Hammer, even if neither figure is perfect. The highlight somehow ended up being the mech, which at first glance I would have thought was the part of the set I would have cared the least about. On the quality side, I want to call it a 1, on price, a 4, but when it comes to the final fun, it’s a pretty good set. On our scale, I’m going to call it a three out of five. It’s a good but not great set, made worth it if you can get it on a good sale.

Verdict: 3 out of 5. You can pick up 76077 Iron Man Detroit Steel Strikes right now on Amazon.com. 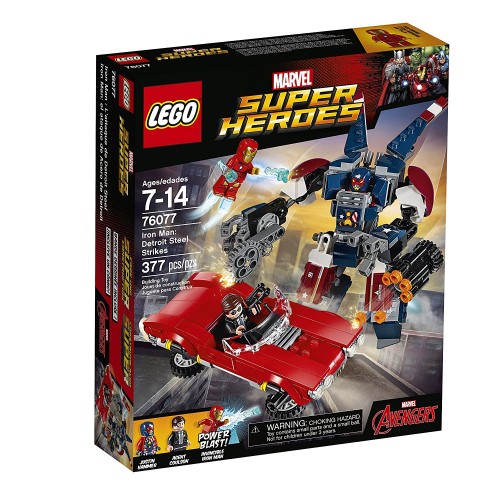 Review: Ori and the Will of the Wisps: The Pressure to Innovate

Today Is The Last Day To Get The LEGO NINJAGO Movie...