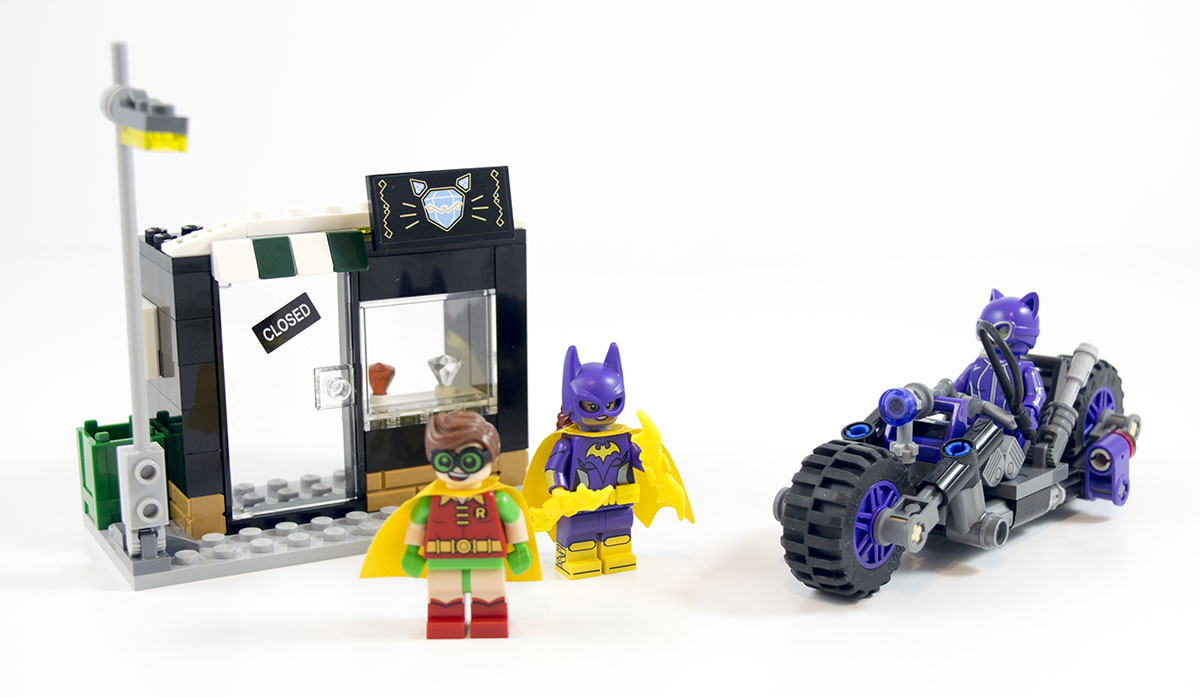 There are currently two different Batman sets available that have the words “cycle chase” in the name… one last year and this year’s movie offering, 70902 Catwoman Catcycle Chase. The other set is lacking in Catwoman, but the cycle is suspiciously similar. It’s in the pipeline to get a review once we wrap up the LEGO Batman Movie sets, so eventually I’ll be able to draw a few more comparisons, but it wouldn’t shock me to learn it’s the same designer.

I wasn’t sure what to make of this set when I decided to review it… I’ve owned every one of the Catwoman sets except the 66 Batcave (though I have purchased the Catwoman figure from that set), but I’d be hard pressed to remember any of them. I remember them usually having those absurdly oversized sport bikes, and Batman in some sort of small vehicle that makes me wonder why he’s not in the Batmobile. This set also seems suspiciously familiar… but looking back to the last Catgirl set, one of the original Super Heroes sets, it doesn’t seem to have much in common. Maybe I’ve just built one too many storefront sets.

At $19.99 and a very slight 139 pieces, this is barely larger than 70900 The Joker Balloon Escape, but has three minifigures… and most shockingly, no Batman. In fact, Batgirl and Batman never show up in same set… only Barbra Gordon and Batman do. So I’m calling the first spoiler of the movie… Batgirl is not Barbra Gordon, but just Batman in a purple suit.

Okay, I obviously don’t think that is true, but it’s just the sort of bad joke I’m apt to make when opening one of these articles. Seriously, openings are hard. You’d think I’d get better at writing them after all this time… but let’s be honest. Some of you have been reading these for years, and you know I’m not about to get better at anything. 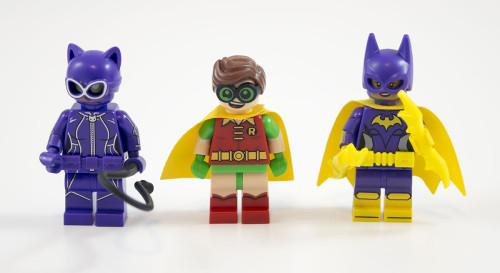 The minifigure selection here is… interesting. This is the only set where Catwoman has her costume (she also appears in a jumpsuit in Arkham Asylum), while Robin and Batgirl are the same as in other sets. I like that we’re getting two female characters in one set, and this is the cheapest way to get either Robin or Batgirl… it’s just that both of them are in excellent sets. 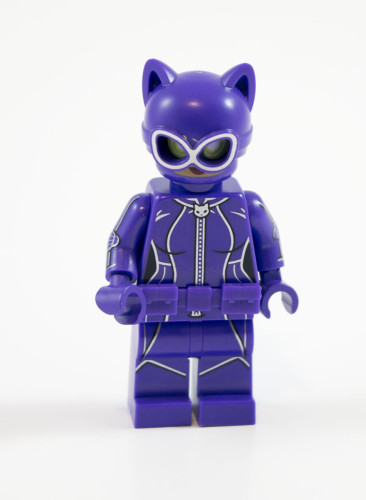 Catwoman has the same goggled head that she had in Arkham, now featuring a purple utility belt and a highly customized jumpsuit (or would we call this a catsuit?) You have to love the attention to detail that puts the cat head zipper at the top, and I do like the helmet look. Still not that big of a fan of the head, but at least it makes a bit more sense here than in Arkham. 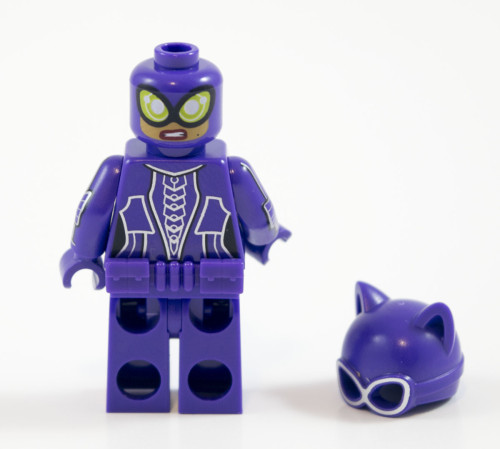 Am I the only one who looks at the spine section of her torso and thinks “Klingon?” Maybe I’ve just been watching too much Deep Space 9 lately (though I’ve since moved on from that and into Doctor Who). Still, I’m hoping they give us a look at Catwoman as Selina Kyle,Â cause then I know what to pick for that custom minifigure. Also, I’m kind of wishing that the goggles would have been a separate part of the build, because the mold for them would be kind of fun. 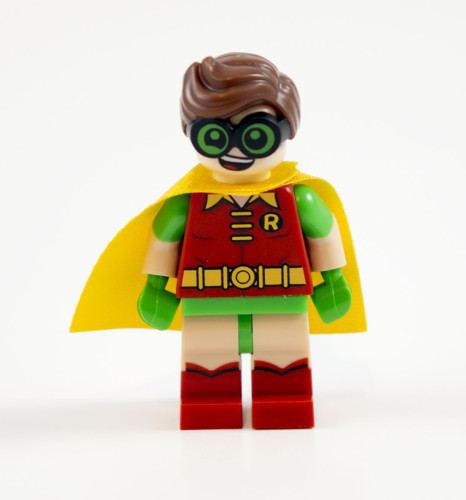 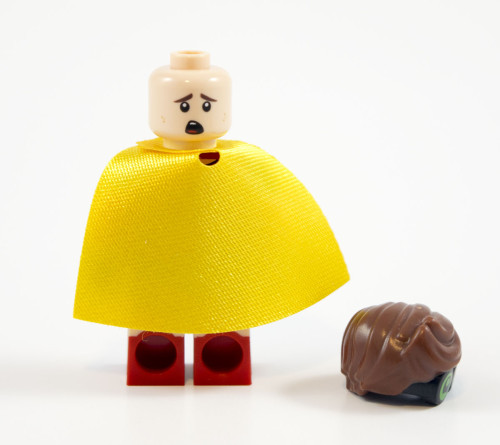 This is the set that I wonder about in the lineup, and where it fits into the movie. We have less than three weeks until it comes out, so I guess we’ll know soon enough. 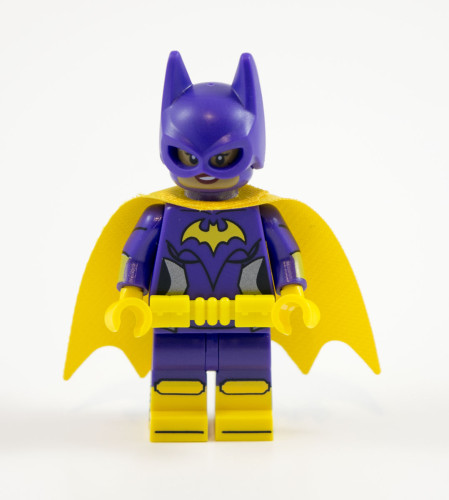 Batgirl here is the same as what we got in the Notorious Low Rider, which is a bit of a shame. It would have been nice to see a little bit of variation on that figure, but I still like her. 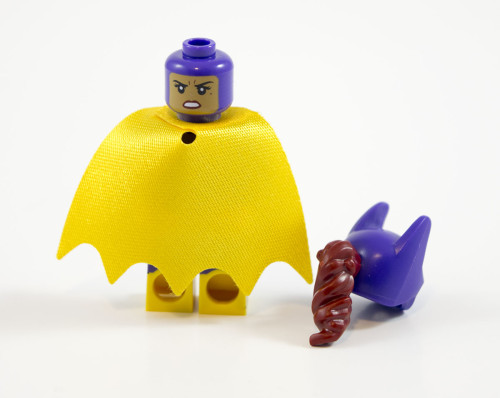 I still love that little ponytail, and we get a few Barbra Gordon minifigs in other sets. It’s just that the minifigure lineup here, outside of Catwoman, just isn’t that special. We have repeats with sets that are likely closer to essential. 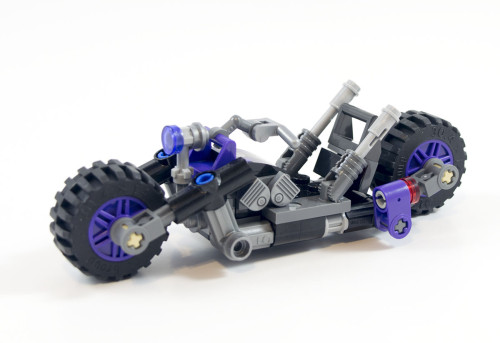 The Catcycle, which is either wonderful extension of the old 50s trend of slapping “Space” in front of everything as an adjective, or shameless brnading. Either way, there’s not much at all that’s cat about it. Previous versions usually got some cat stickers or the like, this one mostly gets purple. But it does get those nifty little rounded 1×1 blocks with a grill pattern. for the engine block. It’s not a bad little bike, it’s just… kind o bland compared to the rest of the LEGO Batman Movie vehicles. 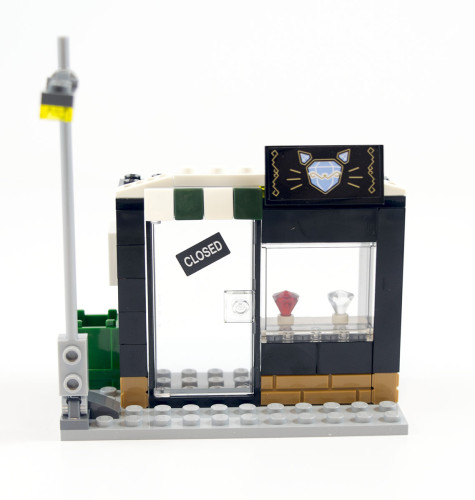 So, my question about this particular shop, which is presumably being robbed by Catwoman. I mean, either they’ve put together the single worst security strategy by putting a diamond cat on the front. I mean, not only are you basically naming your shop “Please Rob Me, Catwoman,” you’re also asking for a crossover and getting Black Cat to come rob from the Marvel side. Assuming, of course, they ever actually make a minifigure for one of Spider-man’s most iconic villain and ally. There are a lot of similarities between those particular characters, is what I’m saying… 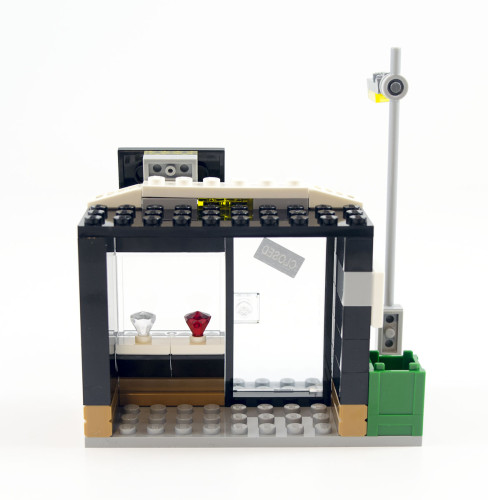 There isn’t a whole bunch to say about this collection of a few bricks. The shop could also be called “Phoned In” or perhaps “Why Even Bother Jewelers.” I mean, there are some parts here, but it’s not like you’re going to suddenly start to integrate this into any display. The low part count hurts the set as well, since it means that there’s very little here worthwhile. Sure, you get the long “brick” bricks, a door and a windscreen glass, but this thing feels like its polybag level for parts.

That’s really the problem with this set. At $20, it feels less substantial than the Joker Escape set. Outside of Catwoman, there just isn’t much to care about in the set. If you’re buying the great sets in the lineup, you got the other two with the Batmobile and the Low Rider. It just feels like this is a $15 set, not a $20. There should either be more to the jewelry store, or they should have skipped it for something a bit better. Of the sets I’ve reviewed thus far, this one is the one I find hardest to find reasons to purchase. I didn’t like the Batcave because it didn’t match the movie, but there were things to justify it on a sale. Here… I don’t know. The minifigures will put it at a two out of five, but just barely. This is probably the weakest set in the whole lineup.

Verdict: 2 out of 5. If you feel so inclined, you can purchase 70902 Catwoman Catcycle Chase on Amazon.com. Or, you know, better sets. 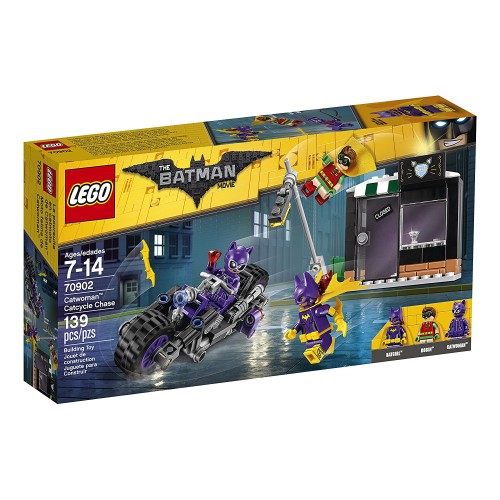