Before the release of Rogue One, I went into total information blackout regarding the movie. I was specifically trying to avoid information and spoilers outside of the trailers that I’d seen, so it was a bit awkward when LEGO sent us 75152 Imperial Assault Hovertank for review and I had to look up some information on it.

I didn’t really mean to delay this review until after the release of Rogue One, life is just a jerk and my time in November (when they sent the set) was eaten up a black hole of work stuff, a funeral, and just family stuff in general. I actually got the pictures taken for this a few weeks ago, but then we got the LEGO Batman stuff and sparkly gold Batman wins out over land transport tank.

This is an interesting set, a $29.99 wonder with three minifigures and a whopping 385 parts… unheard of compared to a lot of the other licensed sets. Since I’m writing this after the release of Rogue One, this is your obligatory spoiler warning. I won’t go deeply into the movie, but will talk about how this vehicle fits into the movie (and it is featured in one specific spot), as well as how the characters mix into it. So, if you haven’t seen it… stop now and get to the theater.

We get a very brief glimpse of this vehicle in the trailers. The named character,Â Chirrut ÃŽmwe, was, and we got a glimpse of troopers in similar armor… but I don’t think this tank was. It did as in the Jedha City scene where the movie hit its stride and got the pacing down (I really liked Rogue One, but it was a rushed mess in the initial hops between a half-dozen planets). I love that we get Chirrut in such an inexpensive set, because I’m looking at having to buy the AT-ST to get the character that belongs with him.

Like I said, the guy on the left isÂ Chirrut ÃŽmwe, played by Donnie Yen, and the other two are called Imperial Hovertank Pilots by LEGO. I guess that’s accurate, and they did appear with the tank, though we need another one to equip the tank based on what we saw. If you want to match the scene in the movie, you also need a couple dozen stormtroopers.

If you’ve seen the movie, you know thatÂ Chirrut ÃŽmwe was a standout character. We know very little about him, so I look forward to seeing the inevitable comic tie-in that features him andÂ Baze Malbus that explores the character so much more (the knock of Rogue One that I can relate with is that most of the characters are underdeveloped, a casualty of the running time and set-up).

You get that he’s blind, which features into the movie, but the figure really misses when you’ve seen the character in action. The coloring is off, he’s just generic white-due minifigure here. LEGO has developed a range of flesh colors for minifigs, and I think they’re overdue for capturing something between regular flesh and the tanned flesh they have in others to capture figures of Asian descent. 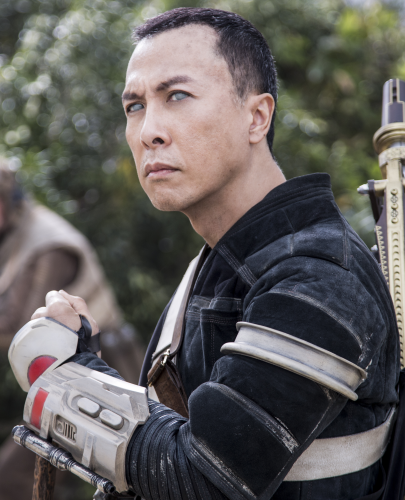 I think it’s also the hair in the mix as well… it makes him look more like a Harry Potter bad guy than a Star Wars good guy. When I originally built this, I liked the stuff that came with him (and, at the time, was worried he was a Jedi)… but now that I’ve seen the movie,Â I wish that they would have done a bit more to make it bowcaster-y. Not sure what it is, not not finding a lot of great pictures of it, but it felt a bit more “hidden” in the movie than we got here. 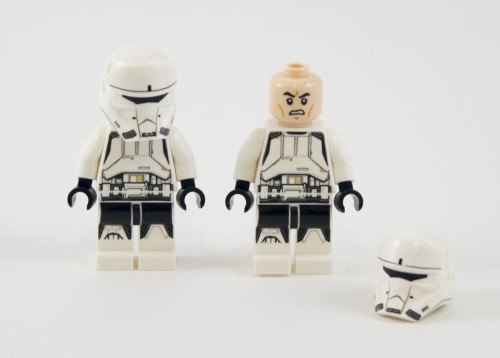 The troops are mostly Stormtrooper, and are seen driving the tank, which is in reality a transport as much as a tank. I like the design of them, but they’re not featured a lot. Under the helmet, they’re generic trooper faces. I like that they’re unique from Stormtroopers, but wonder if we’ll see them show up in any other sets. 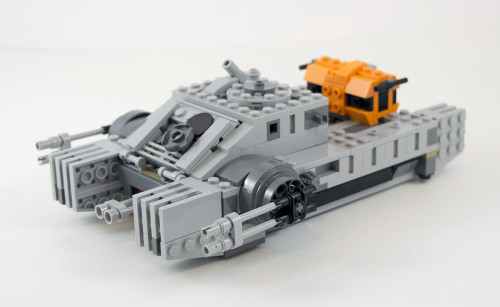 The tank itself isn’t a bad representation. The biggest knock I’d make is that the front of it gets shortened a bit over what we saw in the movie, but when you see it roll on to screen, you will recognize it from the set or vice-versa. They were obviously constrained by the size/parts available, and it shows when you put that part on there.

The orange container we get on the back is a container of Kyber crystals that the Empire is mining. The tank has spots for two containers, but only provides one. Unfortunately, the tank we see in the movie actually has three, so this thing misses twice. At the very least, it should have had a second one… the back feels really empty with the gap in there, like something is missing. 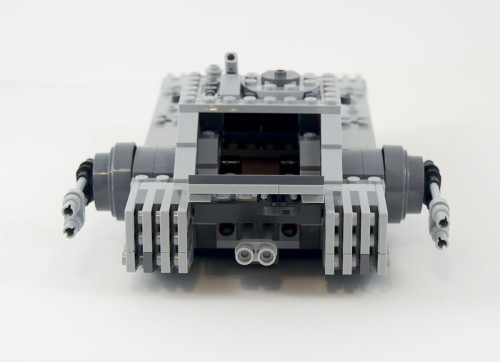 The front has flick missile launchers, which can be launched by a twisting element behind the side guns. The interior of the tank lets you see both figures… mostly, but it’s very cramped and hard to get them in without popping the top off entirely.Â In the movie, the battle with this tank is intense and well done, but it’s not the primary focus of the fight (it’s mostly an armored transport that gets ambushed in the street that negates most of the tank aspects of it).

It’d be easy to compare it to the First Order Open Canoe or the First Order Gray Blob of Parts, but this is a better build than either of those sets. It’s obviously too-small compared to what we get on the screen, but not terrible for what it is. It feels like it’s a solid starting point, and with two of them, you could MOC up a proper tank to match the movie. Unlike the First Order ones, where they were basically just a throw-away compared to the fight, this one would look good in a display as you build up your Rogue One stuff. It’s a good, but not great, set that I’m going to call aÂ three out of five. Though once it hits that sale, it might be worth multiples just for the parts.

Verdict: 3 out of 5. You can get 75152 Imperial Assault Hovertank right now at Amazon.com.Â 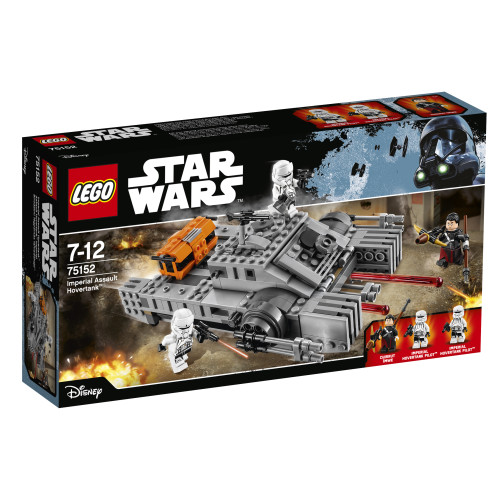