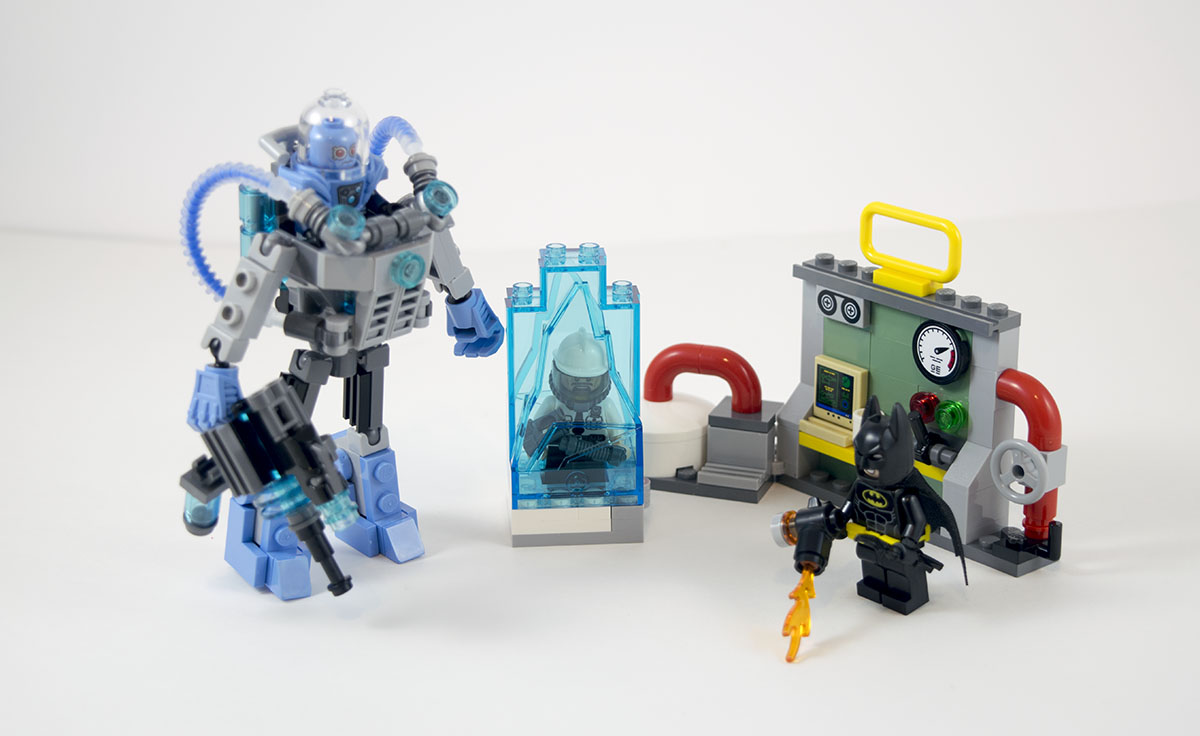 The last of the reviews, 70901 Mr. Freeze Ice Attack, of the initial release of the Batman sets is coming with the least fanfare. Unlike the other three, this one wasn’t sent to us by LEGO, but purchased from one of my local LEGO Stores (along with the latest Holiday Train, for all none of you who are curious). It stands out from the rest in a few ways… it’s the one that’s obviously not intended to be a set by itself (previews have shown that the various small sets coming out this year and next year fit together to make a larger build), it includes Yet Another Mech™ for us to build and forget, and it also includes Mr. Freeze.

Mr. Freeze is a major villain in the Batman lexicon, but has only shown up once in the resurrected Super Heroes line set (the ’66 classic one was a polybag and should have been in that Batcave set). In terms of the LEGO movie, we know nothing at all about his role in the movie; the only villain we’ve heard talk is the Joker. Head-canon wise, I’m going to hope they go full McBain in making and make give him a brand new weakness in only being able to speak in cold-related puns. It’s the villain we need right now.

This set is the cheapest in the line thus far, at just $19.99 USD, and comes with three minifigures and 201 parts. Also, pipes, so there is that. I’m curious about the choice of a generic security guard in the set, since none of the other sets featured an unnamed character, and one of the things that’s been made clear is that there are a plethora of possible figures for them to release. Another villain that matches Mr. Freeze here (Poison Ivy, perhaps) might make this set look a bit more attractive from the outset, but let’s dig into the set itself and see how it builds.

As terrible as the movie was, I think Batman & Robin’s take on Mr. FreezeÂ was a good idea lost in a sea of puns and awfulness. They made him somewhat sympathetic, and felt inspired from the fantastic version that was in Batman TAS (otherwise known asÂ the best Batman ever made… until we see this movie, anyway). Really, I guess you could sub that in for almost everything related to Batman… it was done at its best in the cartoons. 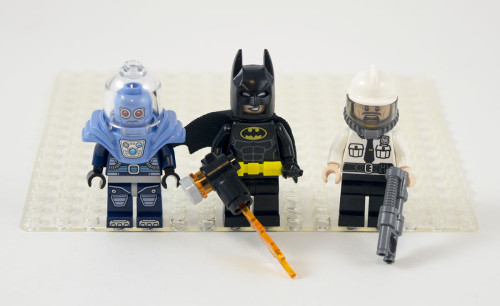 As I stated above, the figures we get here are Mr. Freeze, Regular-Suit Batman, and No-Name Security Guard. It’s not that thrilling of a lineup, and now that I’ve built a lot of the sets in this particular series, I’m hitting my Batman saturation point. It’s a shame that they didn’t use this one to give us a touch of variety. 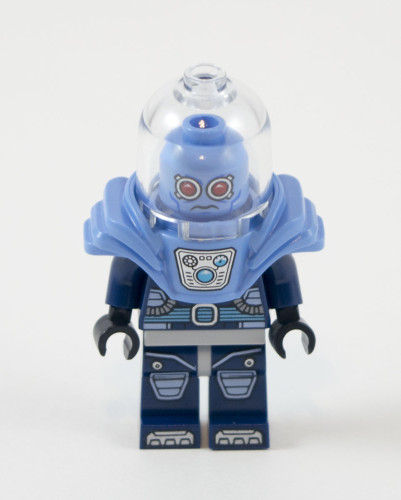 I can’t quite put my finger on why, but this version of Mr. Freeze just feels weird compared to the rest of the figures we’ve gotten thus far. It doesn’t feel like it draws all that much inspiration from any particular source. Maybe a bit of Batman & Robin for the head, though that was more silver than blue (Batman TAS was white, and had goggles, not eye implants or whatever those are). The suit itself feels more like a futuristic version than the throwback mashups we’ve gotten with everything else in the line. 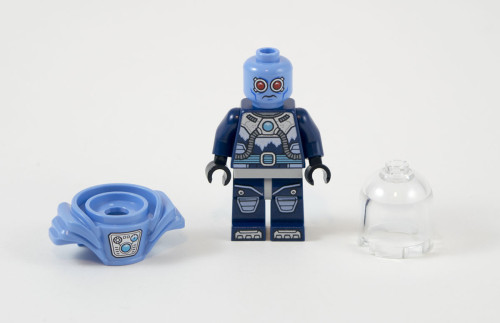 I mean, I’m glad to get Mr. Freeze, but I really wish he had the flair of the other figures. The printed torso actually looks nicer than the armor, but is covered completely by that part, making it feel more like a CMF also-ran than a unique villain. 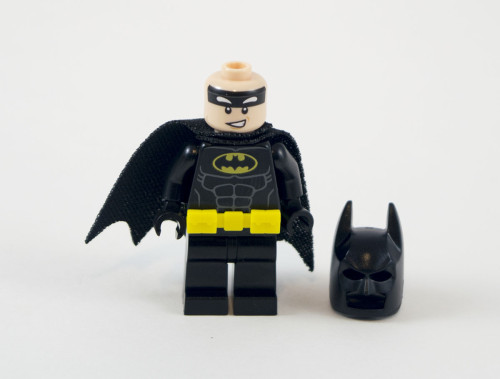 Batman is still Batman. I don’t believe there’s anything unique about this figure, but it could be that I just lump these same figures together at this point. I’m sure it matches the movie, but it seems like they could have taken some liberties and made it more snow-themed to go with the villain. 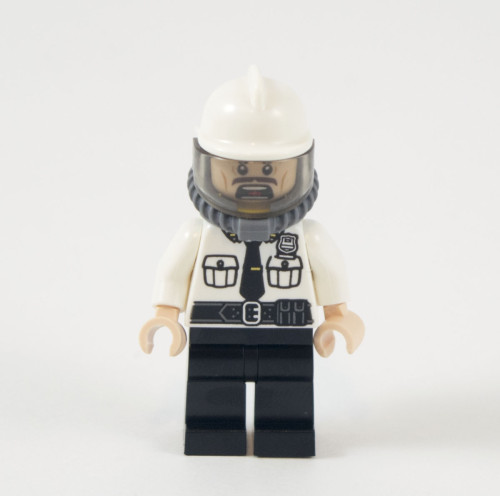 Our guard buddy marks the only generic figure we get in the lineup, and it’s a weird choice. Maybe it has something to do with the movie, who knows, but our rent-a-cop that looks suspiciously like a fire marshal seems to be here as the only person to rescue. The Scarecrow set that comes out… sometime soon, I guess, includes another guard with a different hat. 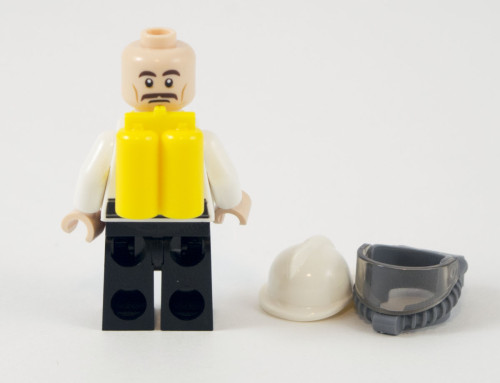 I like generic figures most of the time, but it feels like these sets are supposed to be focused on the rogues gallery and a whole bunch of random characters. It feels like the generic stuff should have gone into a larger set with the other one and called it good. 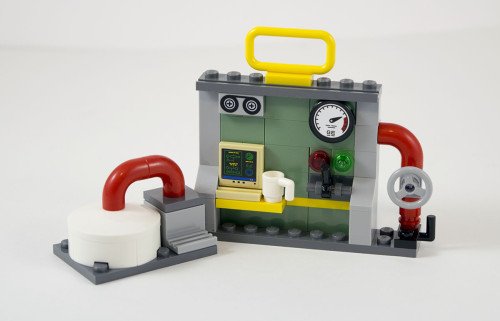 The set includes a small bit of the Gotham Waterworks… there are other parts to this in other sets. Images we’ve seen for other sets that have popped up shows that this combines withÂ 70900 The Joker Balloon Escape, and perhaps some other sets we haven’t seen yet. It’s not a bad little mix, and it’s nice to see red macaroni elbows show up in an inexpensive set. The stickers are interesting as well, with the display and pressure gauge, but there’s not a whole ton of substance here.

I’d like to say I get a whole bunch of excitement out of this mech… it’s interesting, but that waterworks section above makes it feel like we got a short stick in either build. There are some fun parts, like the L tile, the hands, and the tubes that connect to the back. The problem is, that much like the waterworks, it lacks substance. Even in a small set, maybe especially in a small set, dividing the limited parts up makes the whole thing worse.

I like the idea, especially in conjunction with Mr. Freeze. His ludicrously oversized freeze ray makes more sense in the mech than it does with the minifig. The problem is that it’s basically skinny and flimsy because of the lack of parts, and it looks like it. Much like the figure, look-wise, it doesn’t feel like it fits the style of the rest of the things we’ve seen. I would have rather seen this go over-the-top 60s version with it, a bit of a Mr. Freeze meets Robbie the Robot thing.

Ultimately, I think this is probably the weakest of the Batman sets I’ve built thus far. It’s cheap and contains a character we haven’t gotten elsewhere… it’s just regular old Batman and generic security fireman guard person guy. Mr. Freeze is a mixture of a classic look (with the dome) that I welcome in a lot of these minifigures, but the armor, printing, and mech just come off as too modern and bland. The rest of the characters had some place that you could point to in the lexicon and identify the inspiration. I’m not sure I could do that for anything here, and that’s a shame. It’s a cheap set, sure, but it lacks the character and style of the other ones we’ve gotten. Calling this one an unfortunate two out of five. 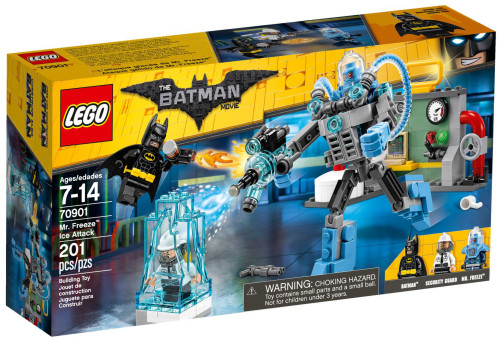