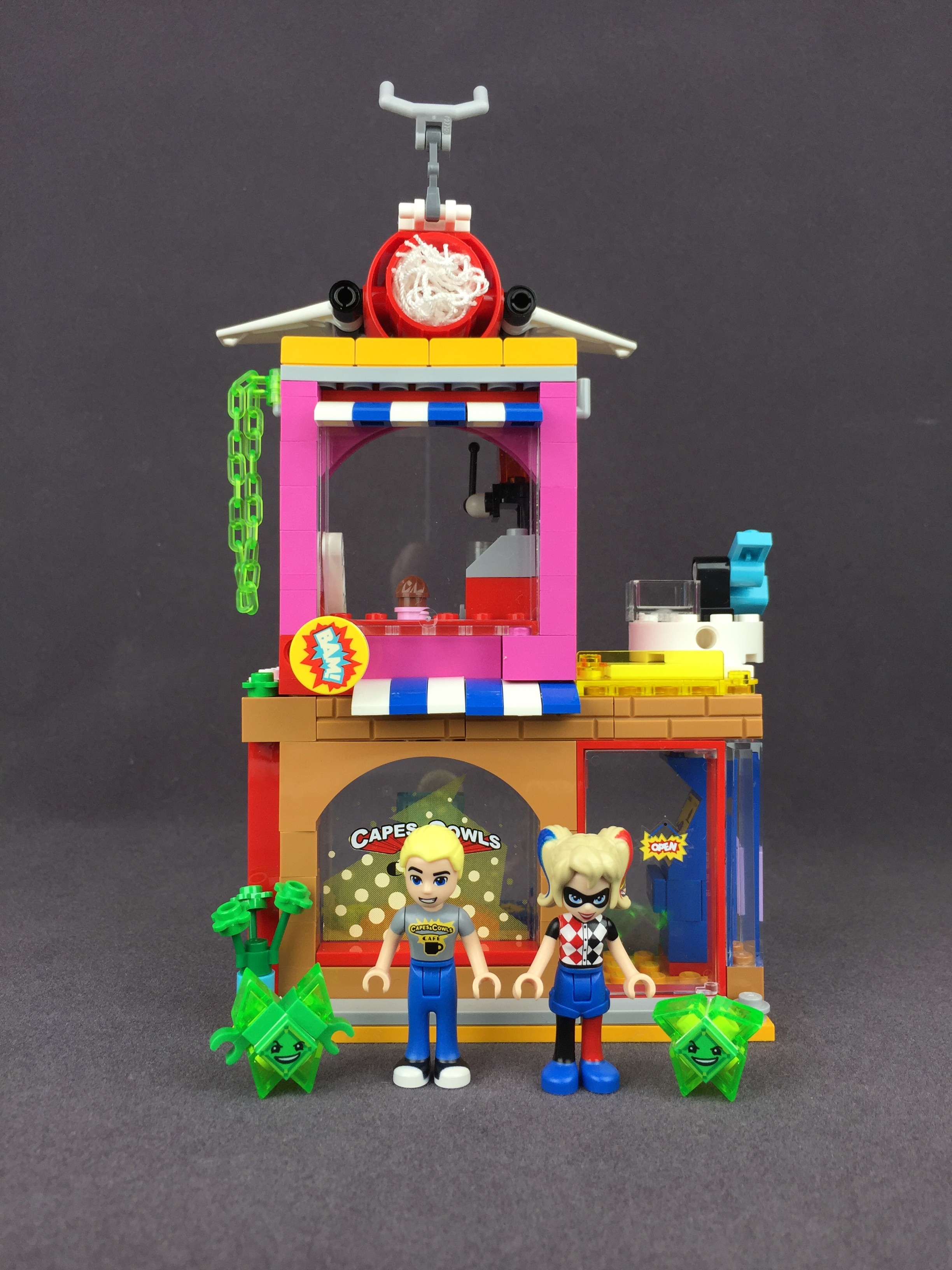 For this review of 41231 Harley Quinn to the rescue, let’s cut to the chase: this is the worst set out of the three preview sets for LEGO DC Super Hero Girls.

Now you may think that the reality of having to rank the three sets in order of greatness will result in one set that comes in last place. While that may be true, it doesn’t change the fact that this set just doesn’t have a whole lot of good points going for it. I can count on two fingers the number of reasons to get this set. 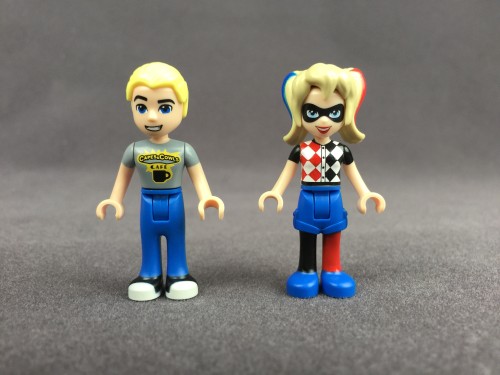 Harley Quinn is as colorful as ever sporting her primary colors of red, blue, black, and white. Her three-tone hair piece is rubber, which I wish LEGO would stop doing, and not ABS plastic. Harley comes accessory-less which is a shame. I kinda wish she had a hammer or a bat or something. 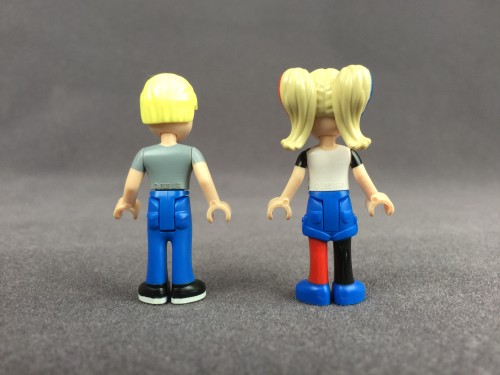 There’s been some hubbub already about having Harley depicted in a set, with some saying that she doesn’t make a good role model for girls. I don’t really have a counter argument for that; I’m not familiar enough with the character and what she’s become since the days of Batman: The Animated Series to really say, nor have I read any of the number of comic books she stars in to see how she’s being portrayed there either. My strongest impression of her though from what little I do know about her is that she is fiercely loyal, and that is something I can definitely abide by. Besides, DC is the one calling the shots here, so if they want to put Harley in their initiative, then so be it. Who am I to argue?

Harley isn’t the only one in the set. It also comes with a male minidoll in the form of Steve Trevor. I wasn’t familiar with the name so I looked him up. Do you know who he is? He is Princes Diana’s, aka Wonder Woman’s, male friend. He is the ONLY male character to get a minidoll in the entire theme so far so that’s something. He appears to be the shopkeeper or a worker bee for the Capes & Cowls Cafe, which this set is centered around. But why he’s in this set partnered up with Harley and not Wonder Woman makes no sense. 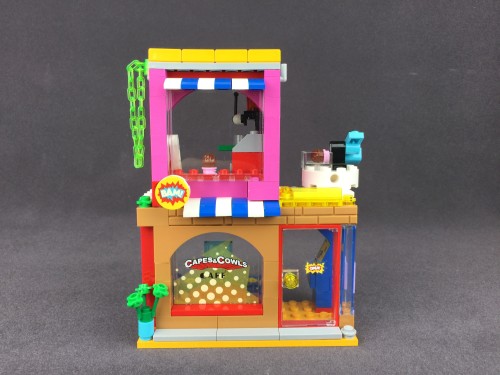 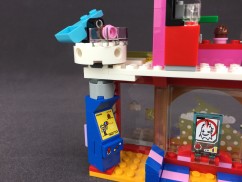 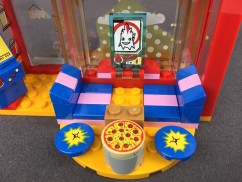 It’s small, two-level building that has a lounge area and an arcade cabinet on the first floor and the cash wrap located upstairs on the second level. The arcade game shows Harley about to whack a Kryptomite. Its attached to the rooftop catapult and can freely rotate 360 degrees. It’s an odd feature that doesn’t really add any play value. I totally get wanting the catapult to swivel but attaching that action to the arcade machine below makes no sense. The lounge area has a couple of stools and that’s pretty much it for the first level. 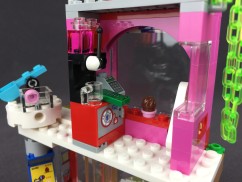 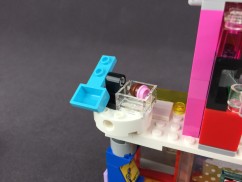 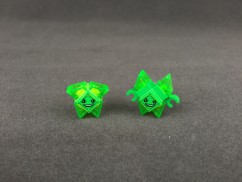 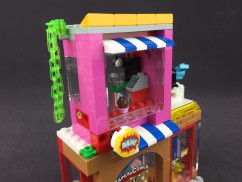 The second level is where the cash wrap is, which makes no sense, and a catapult. LEGO sure does love their catapults don’t they? The roof of the second level has what is supposed to be a landing pad for Harley’s scooter jet. More on that later. The window in front of the cash register pops out by pressing the “BAM!” plunger outside. It works pretty well with a satisfying pop. The register is only anchored by one stud so I suppose the Kryptomites are here to rob the place. You get two little green ones that are built slightly differently from each other and no vehicles or accessories for these guys, just a chain to tie up Steve while they make their getaway. 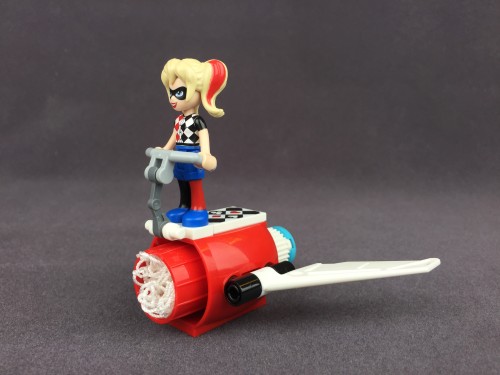 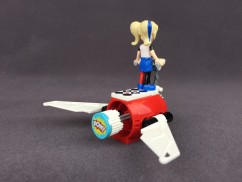 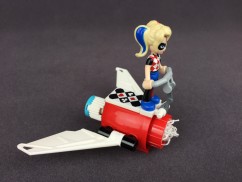 Harley’s ride is a stand-up, winged, net cannon. and can best be described as a scooter jet. THat’s really the only way to describe it. She apparently doesn’t have the resources to build a jet or even helicopter around a net cannon the way Batgirl did with hers. But that’s okay. The mechanism is the same as the one in the Batjet and works just as well, but overall, it’s just ugly as sin. The wings are not locked in position which makes my OCD go into overdrive. There’s this huge, empty space behind the pilot’s position that the designers couldn’t do anything with so they decided to just put a decorated tile there. There’s not even footing for two. It would have been cool to put Steve the Barista on there as a passenger so you can at least re-enact that scene from Titanic.

If there’s one thing I’ve repeated over and over in this review is that there are a lot of things that make no sense. Like, why isn’t the cash wrap on the first floor? Couldn’t the register and exploding window swap places with the arcade cabinet, and relocate the arcade cabinet to the second floor? Wouldn’t that make more sense? And why does the arcade machine turn? Why isn’t Wonder Woman in this set instead of Harley to better match up with Steve? And why is “to the rescue” in the set name all lower case? Shouldn’t they have initial caps? That bothers me a lot too.

This set honestly feels like things were just slapped together. The exploding window works nicely and having a minidoll of Harley Quinn is the shining point of this set, but those cannot outshine the many negatives. I know I’m not even close to being the target audience but even my daughter didn’t pay this one any attention after building it. She wanted to go back to Batgirl’s Batwing. I’d hate to give this set a 1, especically after coming off the high that was the 5/5 Batgirl set, but alas, it is what it is. Get it for Harley but wait for a serious sale or just pick her up on the aftermarket. One out of five stars.

Buy or don’t buy 41231 Harley Quinn to the rescue from Amazon or LEGO Shop@Home: 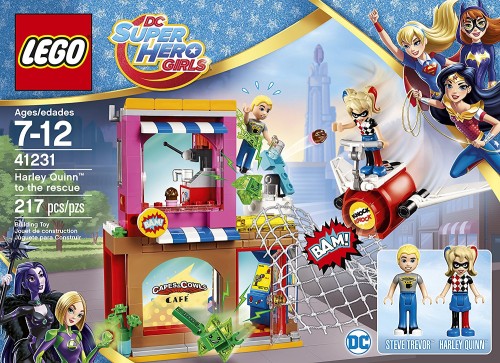