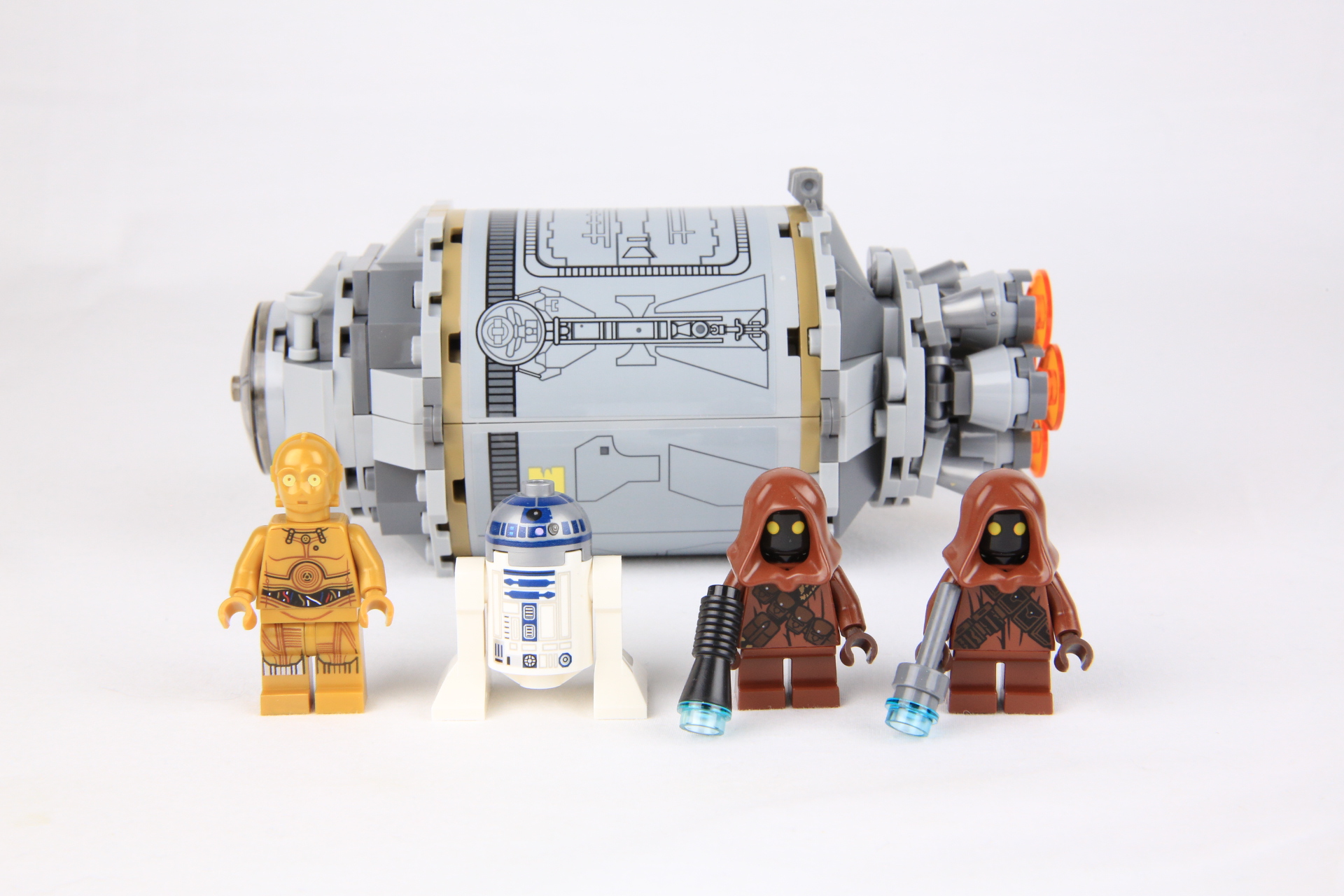 Now this, this is what you should be spending your money on, not that Hoth junk. 75136 Droid Escape Pod is a fantastic little set that won’t break the bank ($24.99 MSRP with 197 pieces) and that every Star Wars fan should have.

Now before I sing this set’s praises, let’s take a look at a highly detailed model of the Escape Pod: 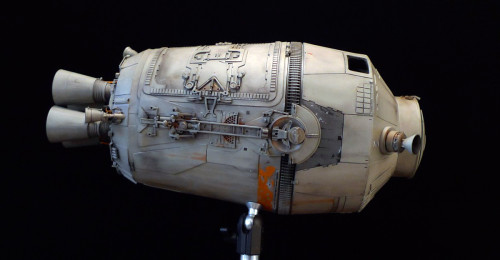 Pretty nice stuff. And the 75136 Droid Escape Pod model looks like so: 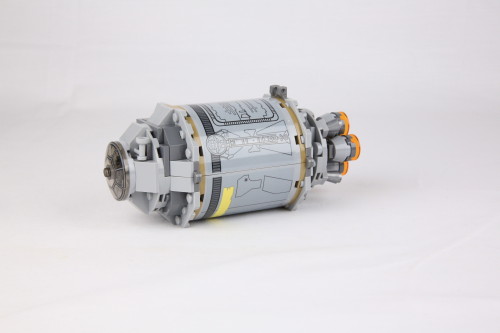 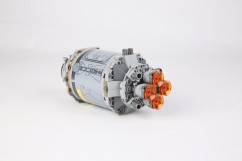 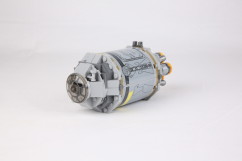 75136 Droid Escape Pod is pretty similar to its predecessor, 9490 Droid Escape, but has a few improvements that the old version needed. The biggest improvement is the part selection of quarter cylinder pieces instead of the half cones. Comparing it to the model above, it still doesn’t exactly capture the narrow angles of the hull but it’s much closer than the wider angles from the half cone pieces.

On a separate note, that half cone piece is used with reckless abandon as the top and bottom halves of the Millennium Falcon cockpit and is ill-suited for even that task. Methinks that once they finally make a proper cockpit element for a Falcon, it will be re-purposed for an even better Droid Escape pod sometime in the future. 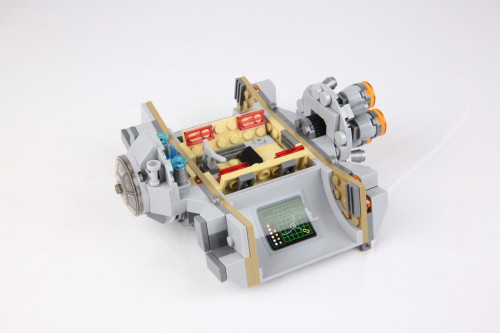 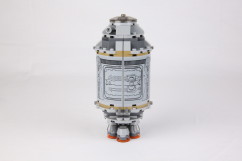 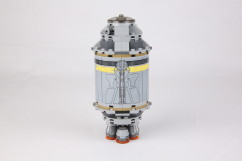 You gain access to the inside by opening up the top. Two of the quarter panels swing out like reverse bomb bay doors. You can always tell which way is supposed to be up by the two finger joints sticking out from the bottom. That, and the large stickers used on the panels are different between the top/front and bottom/back. The stickers cover the entire surface of the panels, a much needed upgrade compared to the paltry stickers you get in 9490. 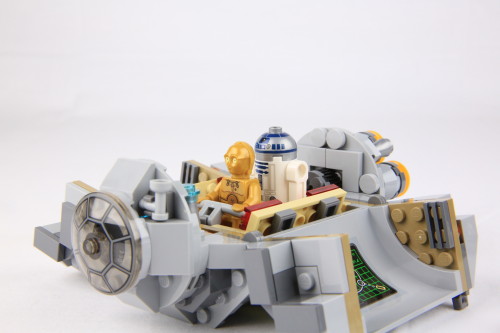 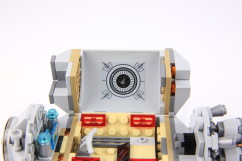 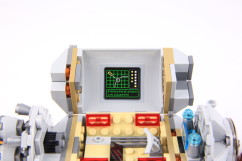 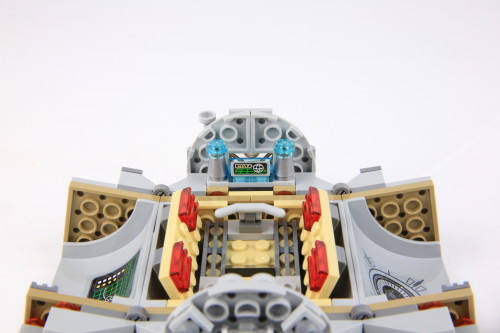 The interior has also been upgraded from 9490. It’s much more roomier this time around and a few stickers are used for a greater level of detail. On one side, there’s a portal showing the Imperial Star Destroyer off in the distance. On the other is readout showing the trajectory of the capsule on its way to the surface of Tatooine. There’s an additional sticker on a 1×2 panel element showing the pilots instrumentation. To the designer’s credit, the pilot’s view actually can see all the way out of the nose of the craft through the windscreen, a detail that I really liked and appreciated.

Just for the record, I’m okay with stickers for the most part. I see them like any other LEGO piece. What I can’t stand are stupid stickers (i.e. stickers that are applied to an element that look exactly like an existing printed element) or stupid sticker placement (i.e. a sticker applied to a 1×1 tile). The portal and readout stickers fall in the latter category. Aligning stickers so they are straight and centered is hard enough on a flat element, but applying them to a concave surface is even more frustrating. These were not fun. 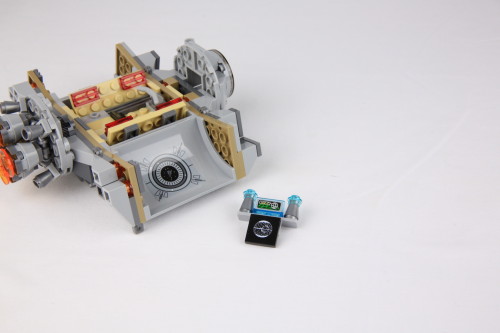 The display assembly can be pulled out of the slot revealing a PRINTED tile of the Death Star plans. Printed elements are not that common anymore in LEGO sets; you’ll see more stickered elements than new printings, so getting one that is very specific to the Star Wars theme was quite a surprise.

Tip: That display assembly rattled a fair bit when slotted inside and the two quarter panels are closed so I added the extra 1×1 trans-blue round plates you get in the set to the cones. The assembly now sits flush with the Pod panels and they still close all the way. 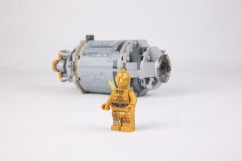 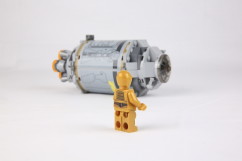 This is the first time we’re seeing C-3PO since the Sandcrawler from two years ago not including the holiday-themed one in last year’s Advent Calendar or the red-armed Episode VII variant polybag ’cause those don’t really count. He is sporting the updated detailed printing on the torso and legs but lacks any printing on the arms though like there is on the red-armed polybag version, so there is still an ultimate version of Goldenrod that has yet to be made or released. 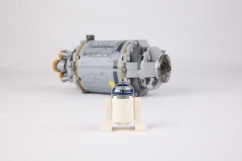 R2-D2 looks pretty spiffy as well sporting a new dome piece. The dome is actually silver and not light gray as in previous versions. It also has a faint pinkish purple color on two of the indicator lights, one in front and one in back, kicking the accuracy score up a notch. There’s still no printing on the back though, but they are probably saving that for a future version. My particular copy of R2 is a bit of a defect because the printing is noticeably off center. A quick visit to Shop@Home’s website will hopefully net me one that came off the assembly line a little better. 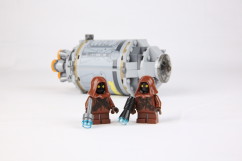 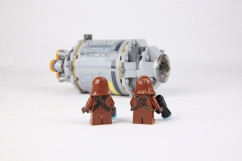 The previous version of Droids In A Can, 9490 Droid Escape, included Sandtroopers, which were great. Those minifigs were unique to that set and were pretty nicely detailed. In this updated set, you get Jawas instead and they aren’t unique. Depending on whether or not you got 75059 Sandcrawler or paid out big bucks to get them off of Bricklink, this could either be a lateral move or a godsend. They are exactly the same as the ones you get from 75059 Sandcrawler. Thankfully, you get one of each pattern making acquiring them a cheap and easy transaction. And they each come with flashlight, tool, or ion blaster or whatever you want those things to be. Utinni!

I really wouldn’t be surprised if future releases of Droids In A Can didn’t stray far if at all from 75136 Droid Escape Pod. As with any perennial set that gets re-released ad nauseam, there comes a point where the design simply can’t be improved upon in any major way. This version has reached that point where future versions will be based off of this iteration. There is very little more than can be done to make this set better. The minifig selection is quite nice; Threepio and Artoo never looked better and getting the two Jawas that were previously only available in 75059 Sandcrawler in a cheap set can only be a good thing. The set’s only weakest point really is the stickers that need to be applied to the inside wall of the curved panel but thankfully they are large and can be expertly applied with a little extra time and patience. Now, I don’t know if coming off the terrible 75098 Assault on Hoth set is influencing the high score on this set, but this was just a delight to build. 75136 Droid Escape Pod deserves a solid 5 out of 5 stars. 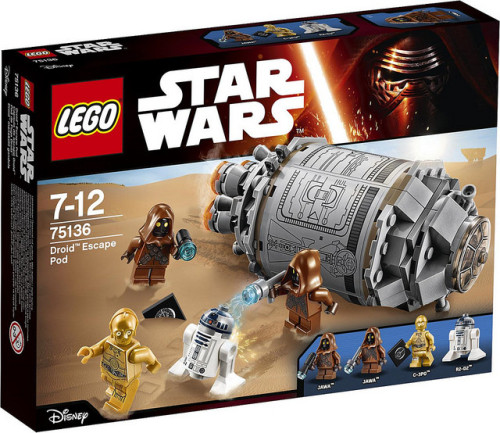