One of the very few things that makes sense in Batman vs Superman is when they show Alfred fixing some of Batman’s gear. Oh, and spoiler, I guess, for something that’s basically used as a non-plot point and to get you to laugh later when the Batmobile gets damaged. Alfred has long been one of the best parts of Batman lore, and frequently the moral compass and influence of “humanity” to keep Batman from going full-on psycopath. BvS is a movie of many sins, and under-using Jeremy Irons is towards the top of the list. Seriously.

I’ve been hard on DC in the past for sticking Batman in sets where he doesn’t belong, but I have no problem with actual Bat-themed sets. One of the most wonderfully absurd parts about the Batman mythos is the insane manufacturing and fabrication industry that must exist to make the highly specialized fleet of vehicles that he has to use. Say what you want about Batman, he’s obviously a guy that understands good marketing.

I decided to review 76034 The Batboat Harbor Pursuit mostly because I wanted DeathstrokeÂ and the set helped me get some promo item by bumping up my purchase at a LEGO store. I’ve had it for awhile, took pictures, etc… everything else just kept getting in the way. It’s not that it’s a bad set, or even looks like a bad set; at $30 and 264 pieces, along with greatest of the Deadpool knockoffs*, it seems to be fairly solid. It’s just… how many Batmans is too many Batmans?

*That was a joke, for those currently wanting to go rant in the comments 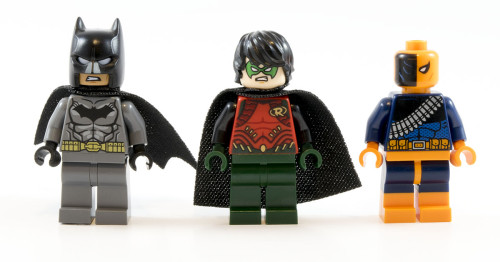 I’ll give this set a pass for the obligatory Batman, since it’s obviously a Batman set. The inclusion of Robin is nice to see, though I’m not sure what version of Robin this actually is. Deathstroke is really the figure to get, even though he’s gotten a very short stick in the new-52 (which is now becoming something else, so who knows). Robin and Deathstroke are unique, while this version of Batman has been in a couple of other sets. 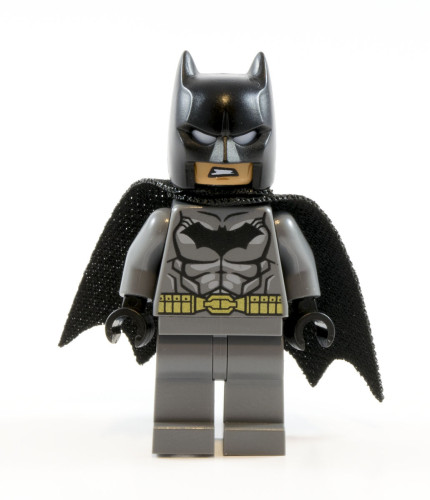 This is the version that was in Gorilla Grodd Goes Bananas, a set that I really liked, but certainly didn’t need another of. I do like the mouth design on this one, and it’s better than the BvS version in most of the other sets. Really, though, I think we can all agree that they pale in comparison to ’66 Batman. 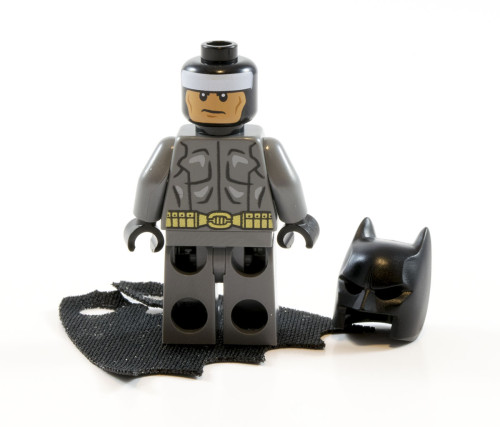 I think my actual favorite batman minifig version is the LEGO Movie version. That or one of the more classic, basic designs. Or the Adam West version, because he doesn’t need those fancy lines. It was pure, Adam, West. 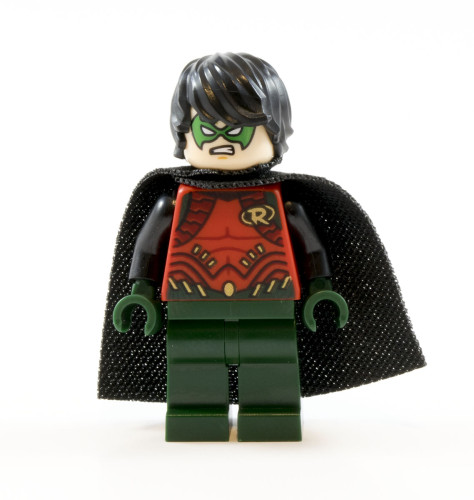 I’m pretty sure this is actually a Dick Grayson version of Robin, specifically the early New 52 version (before the position of Robin got all confusing).Â I like Grayson a lot more as Nightwing, but who know show that even fits in the current DC Canon, which is in a perpetual state of mess. You can pretty much sub in any Robin that you’d like here (and I wouldn’t object if they felt like slipping in a Stephanie Brown or Carrie Kelley version). 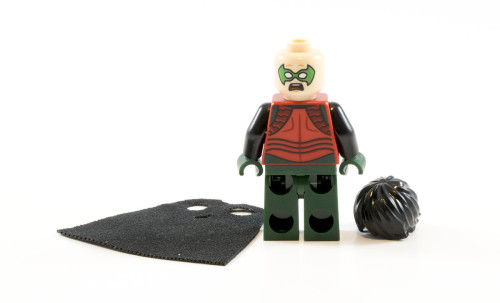 I really wish that the masked figures like this would include an unmasked version for the alt-face so it would be easier to make the secret identity version of the characters. There are like seventeen-million different Robins, and only so many generic faces to go around for them. It’d just be nice to match up the various orphans that Bruce Wayne has abducted and tortured over the years with the costumed hero.

We now have a few different versions of Robin… these were the three that I just had sitting on my display shelf. Comparisons like this lend themselves to so many jokes that are just inappropriate and offensive, but it’s also easy to see where they come from. 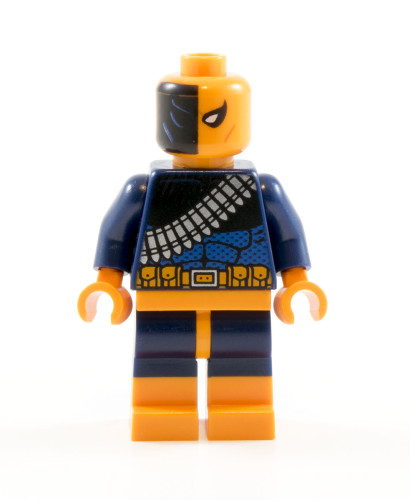 Originally, I wanted to fill this up with a whole bunch of jokes about how Deathstroke was just a Deadpool ripoff, despite the fact that he predated the character by more than a decade and the creator of Deadpool who’s not infatuated with pouches and 34-pack abs has said, flat-out, that Deadpool was pretty much entirely a Deathstroke ripoff (Fabian Nicieza, if you were wondering, who was also responsible for the excellent Cable & Deadpool series; he also did several Robin series pre-n52). 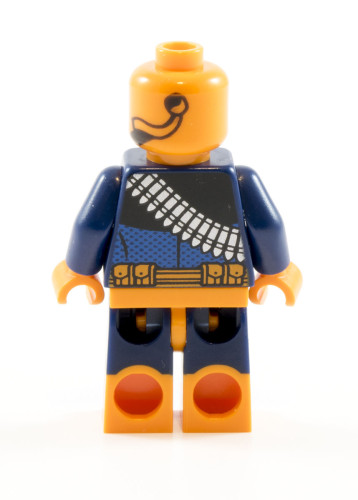 As a minifigure, this guy is just fine, but there’s not much to talk about. I kind of wish the ammo bandoleer wasn’t on there, simply because how it ends just looks kind of odd. The two-tone legs are a big stand-out, and I could see some big applications for it. The back of his mask printing is just odd, since if you didn’t know what that was, you would assume it was an air-hose or something like that. It almost looks like someone drew it on the back and they went for that with the final print.

The sad reality, though, is that the figure on the right will be the more valuable one for some time, however. Because no character is improved if they show up in the DC movies, and there isn’t likely to be some sudden explosion in Deathstroke popularity anytime soon. 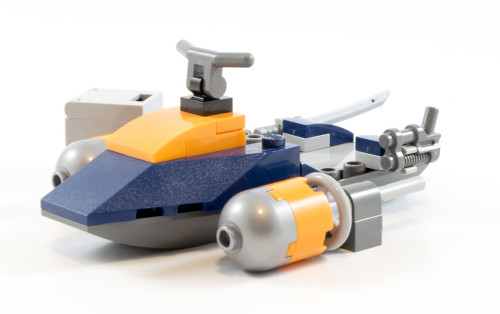 Deathstroke has a jet ski, so there is that. Well, kind of a jet ski, it’s a bit small, and more missile/pontoons than anything else. It’s primary function seems to be more color scheme and racks to hold weapons than actually an escape craft. It includes a chain to drag a box behind it, because Deathpoolstroke only steals incredibly durable (and water resistant) things. 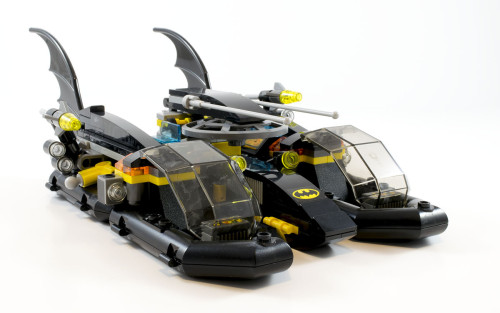 This is the second version of the Batboat we’ve gotten, though you need to go all the way back to 2006’s Killer Croc set to find the other one. It’s kind of a shame, given that the Batboat makes far more sense compared to all the jetpack variants we’ve gotten. I mean, BvS showed us that there is a whole lot of water around the city (and, much like Nightboat’s home city, Gotham always has a convenient canal to provide).

I did have the original Batman set (I actually had all of them, but sold them when the prices on those things spiked absurdly before the second Super Heroes line came out). That version of the batboat used a weird rubber bumper that snapped over technic parts… and it was just an awful set. Killer Croc was cool though. 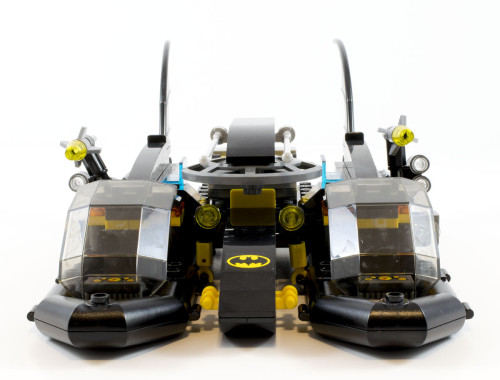 Here, we get more of a collection of different parts, and this is designed around a few playset features. There are the obvious flick-fire missiles, but also a satellite dish that flips up for some reason. Each of the little cockpit sections is designed to shoot off as well, with launcher pins behind them to let Batman and Robin fly off in their own directions to chase the branded jet ski carrying what is effectively a boat anchor behind it.

The smaller boats work out well enough, but honestly, I think it’s better as a full boat. I also think this was a real missed opportunity to just redo the Killer Croc setup a lot more (you know, a villain who makes more sense going after a boat). A slightly bigger set would have given us something more on the bad guy side, and maybe even a villain team-up (which are justÂ the best in the Batman world; I’d say the only comic character who can get bad guy teams as good is Spider-Man). 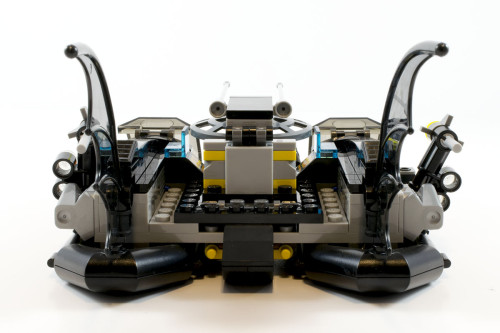 Otherwise, mostly the boat is just inoffensive. If you want some little black rafts, say to build a spec ops team or something, this is a fine set for it. But otherwise, there’s not a whole lot of great parts there. The Batman wings are very easy to get, as are flick-fire and missile parts. The cockpit glass used is one of the ones with the lowest utility, since it requires a lot of parts to “enclose” with it. A few slopes and other parts are there, but nothing to really justify buying this set for the parts.

By itself, the most I can say for this set is that it’s mostly just “eh.” It’s not an awful set, but it’s not really outstanding. Getting Deathstroke earlier in the run for Super Heroes would have been nice, but in the comics he’s been mishandled for some time, and he doesn’t really exist elsewhere. Robin is unique, but we’ve gotten others (including those polybags that were just everywhere) and Batman is available in better sets. At best, this is about a boat and Deathstoke, and I’m feeling generous, so I’ll call it a three out of five. On a sale, not a bad purchase, mostly because this isn’t an expensive set. 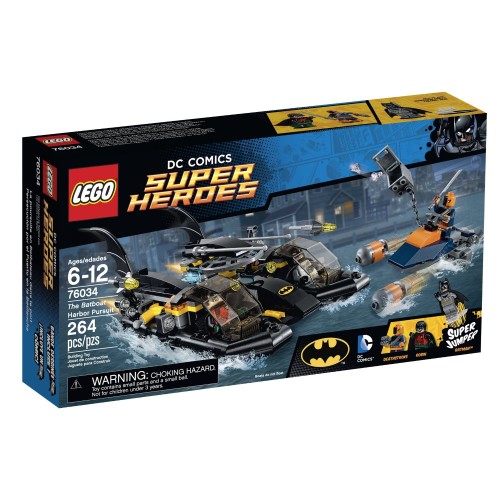