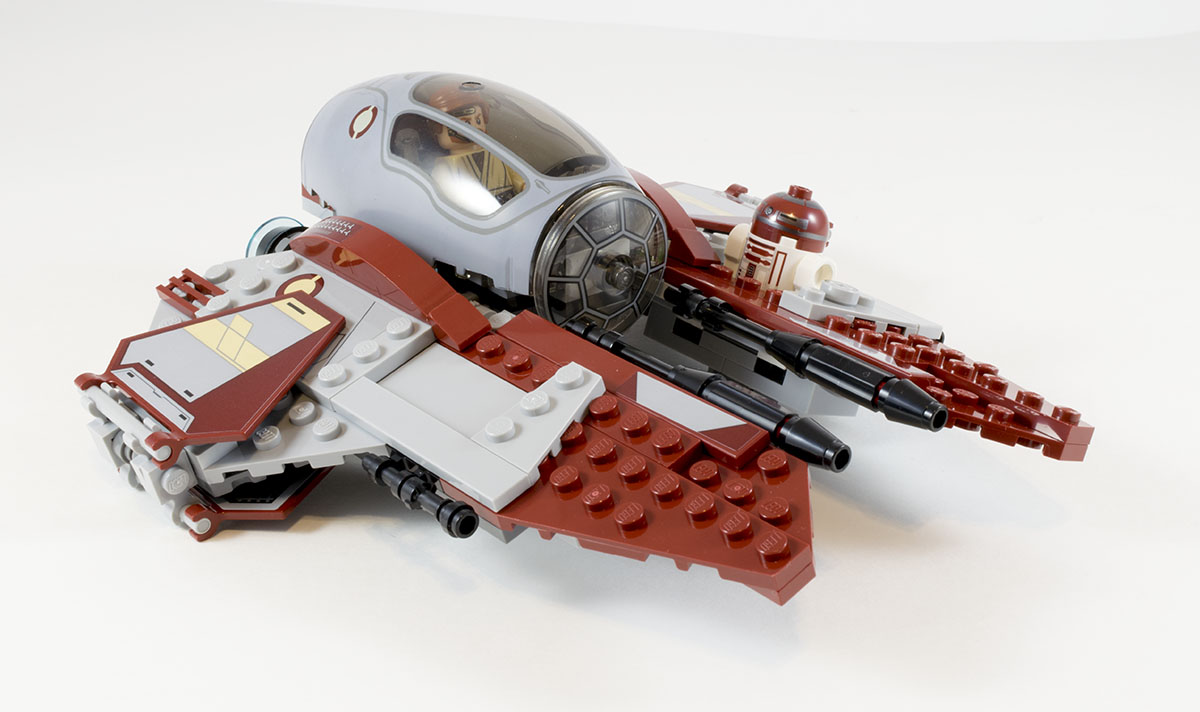 Okay, before we get this review rolling, let me cover the most important point for the whole thing: I know R4’s head is on backwards. He should be glad I even put it on, since all he does in the movie is suck and die when a buzz droid shows up. R2-D2 would have straight up murdered the buzz droid that landed on his ship.

At 215 pieces and only Obi-Wan and his trusty Astromech, this set is a bit on the petite side. Of course, it’s quite similar to Anakin’s Jedi Interceptor we got a couple of years ago, so it’s not that huge of a deviation overall. But, compared to sets in the same price range these days, a single minifig and astromech does stick out a bit, especially whenÂ both are just repaints. Still, this is a ship that has been missing from the the lineup for years, and it’s still nice for it to finally get some love.

You know, I have to confess that I really haven’t been feeling the review on this guy. I got him the day he came out, but after the 75051 Jedi Scout Fighter, I got the parts I needed to make my own version of this.

Which I did, and it’s filled that little niche. I appreciate getting this set, and a version with the flight headset for Obi-Wan, but this didn’t feel like nearly the gap it was for me just a few years ago. The real thing this gets me is a few better stickers for the wings. 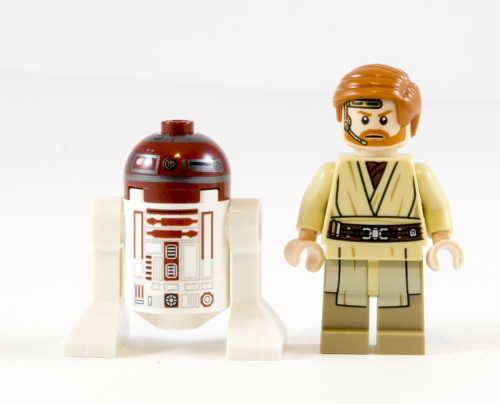 As I mentioned earlier, we get two minifigs, Obi-Wan and R4-P17, an astromech. Obi-Wan has the little headset we saw him and Anakin wearing. I remember that for the longest time, the headset head for Anakin was the most common variety, and we different Obi-Wan heads thanks to him being in more set. That whole equation has obviously flipped over the years, and there are plenty of either character to be had. 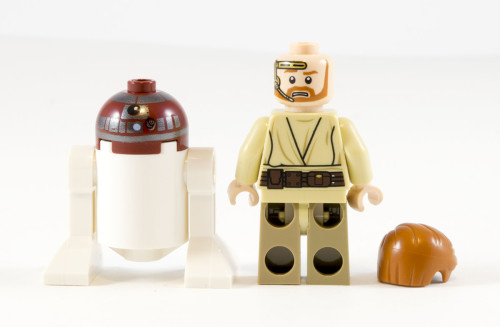 As for Astromech… I really wish they’d just make a dark red astromech body already. Come on LEGO, we want our colors to match! 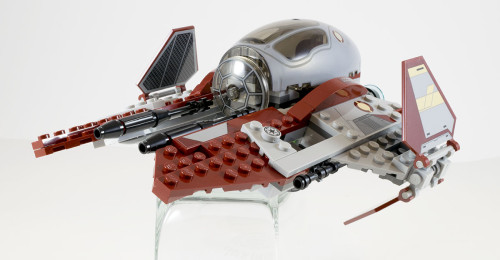 Maybe part of the reason I get so “meh” about reviewing these is that I have done it so many times at this point. I like getting it in a different color, at this point I just want to finish the rainbow. What do we need for that… purple and orange? No one ever wants to invite Indigo to the party anyway. 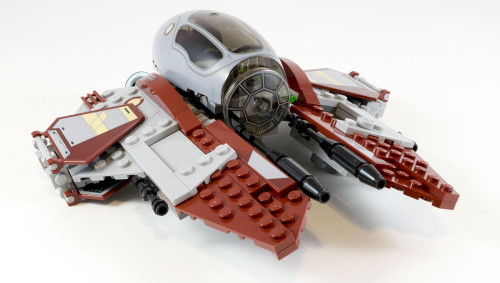 In some ways, this build feels like kind of a step back from Anakin’s Interceptor. The cockpit barely fits over the top, causing that little dish effect.Â It also really doesn’t lock into place, so it can flip open a bit while swooshing. 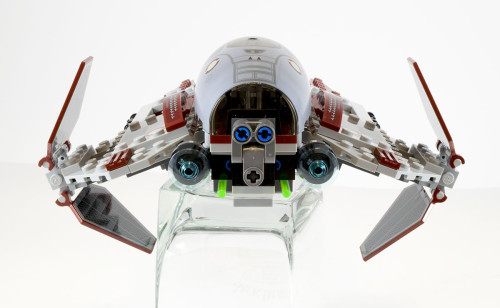 The cockpit “latch” is a couple of technic pins, which connects it a bit better, but those exposed blue pins are just ugly here. I liked the older version where you could attach something to the back to hide them a bit more. The hinge, however, makes it difficult here. I left it looking like this just because I got annoyed with the whole deal. 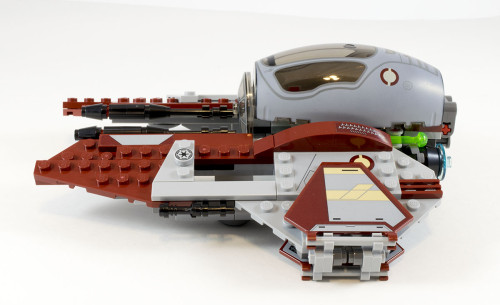 I also have to call out the stickers on this set. Not that they’re out of place… it’s like most of the others. But there are some real orientation issues with how they go on. They are numbered, but the directions don’t make it clear which way to put them on there. 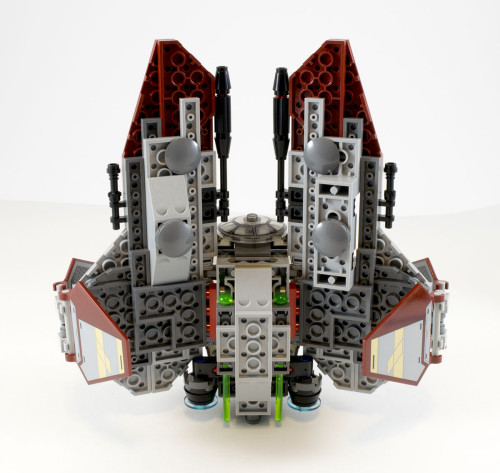 The biggest improvement on this version most certainly is in the astromech section, though. It’s such a simple and elegant solution that I can’t believe it show up in other versions. Just the mix of the little cockpit section compared to slopes on the other make for a great uniform look on top, and double as landing sections.

After all these years of missing the first version, this sort of feels anti-climactic. I’ve said before that I like the design of these ships, but LEGO had finally gotten to the point where there were parts to put one together. I like finally getting the whole thing, but as a small set, it feels like something else would have been better here. It’s not an awful deal of a set, but there’s just different stuff that you can spend your money on. For $25, it’s decent, and for that reason, I’m going to call it a three out of five. Could be better, could be worse. 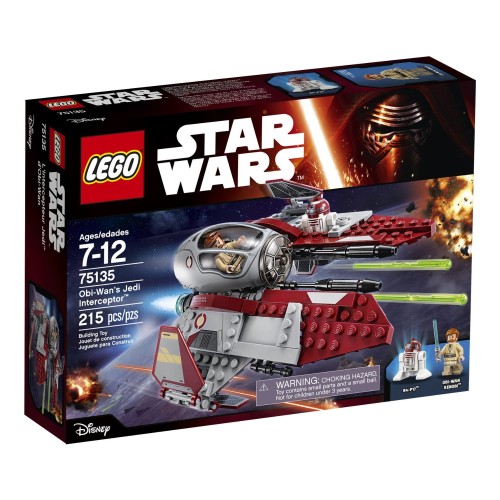