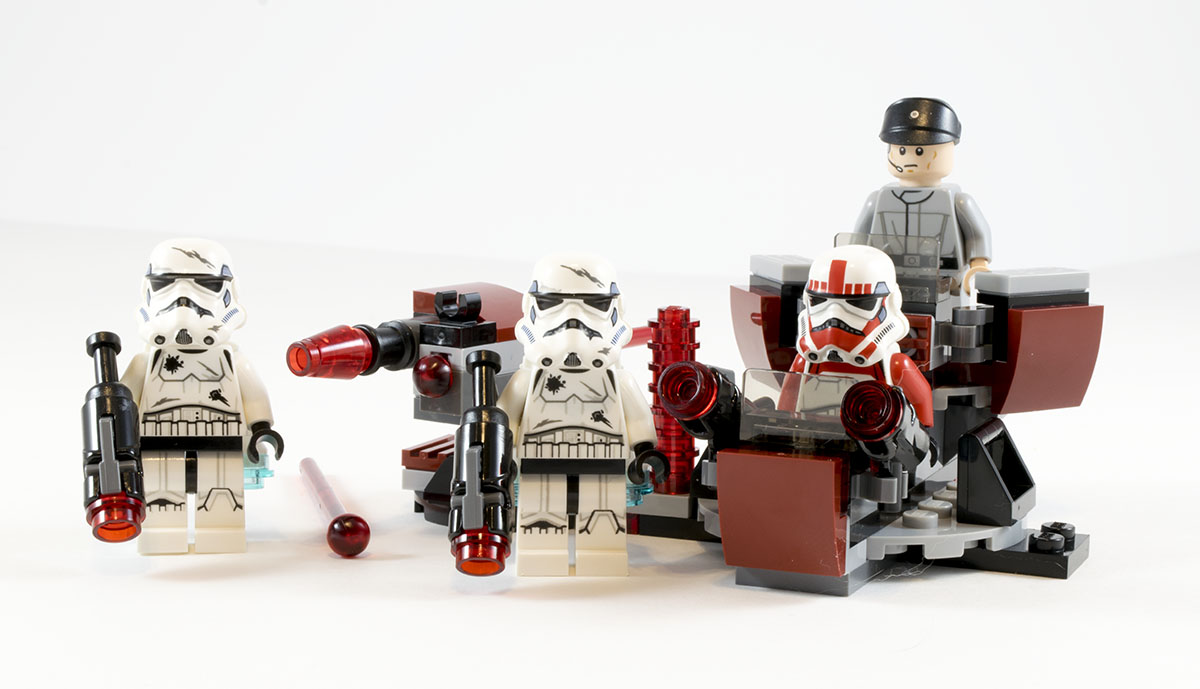 LEGO has never been the best company at communicating, well… anything really, unless they wanted something from fan and news sites. So while it was surprising that when the 2016 sets showed up at the beginning of the year and half of the new sets were missing, it wasn’t really shocking that LEGO missed telling anyone about it. The weirdest part was that Europe got all of the releases at the same time, but the rest of the world was left waiting for the new sets that had originally been revealed together.

No idea if it has something to do with the “shortage” that LEGO reported in Europe last year, but there have been some real strange trends in the LEGO supply chain lately after years of pretty predictable stuff. SeveralÂ sets were gone in short windows, and some seem to linger around on shelves. Now that all of the early 2016 sets on on shelves, we have last year’s lingering battle packs along with four new packs. I’ve already coveredÂ 75132 First Order Battle Pack andÂ 75131 Resistance Trooper Battle Pack, which are both fine ways to spend your LEGO dollars.

While I love the chance to bolster the number of First Order troops I have (Resistance is a bit more sketchy, as they didn’tÂ do anything) in the movie, I was far more excited to review 75134 Galactic Empire Battle Pack and it’s brother, 75133 Rebel Alliance Battle Pack, since there is no such thing as too many Rebel or Imperial troops. I’ll talk about the Rebel pack on Thursday, but there were some things that were an immediate draw in the Empire pack, like an Imperial TechnicianÂ and a couple of jetpacks. At 109 parts and the standard Battle Pack cost of $12.99, this set seems to have a whole lot going for it. Except apparently anything to clean armor.

Sometimes when you build a Star Wars set, you’re left wondering if the person who designedÂ the set has ever seen Star Wars, or in this case, played what is assumed to be the inspiration source, Star Wars Battlefront. There are people like that out there, and occasionally a designer can turn that into something awesome.Â My wife has seen Episodes II and VII; for contrast, my 3-year-old daughter has seen all of them more than once. Sometimes, you just pick your battles, and based on the LEGO stuff my daughter has been leaving on my desk, that seems to be time well spent. 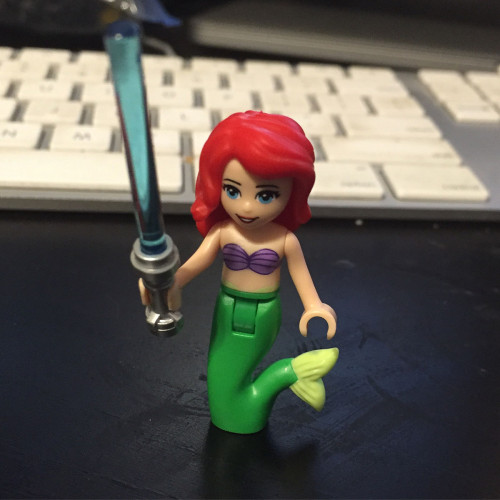 For the record, that little thief stole my Ariel minidollÂ to do this.

We get four figures in this set, like all Battle Packs. Two Stormtroopers who are apparently big Rocketman fans, a Shocktrooper, and the aforementioned Imperial Technician. The Shocktrooper is an interesting mix, since he’s only existed in Clone Trooper form before. Likewish, the tech is an interesting addition, since we’ve gotten Imperial Troopers and Officers before, but techs have only existed on the Rebel side. 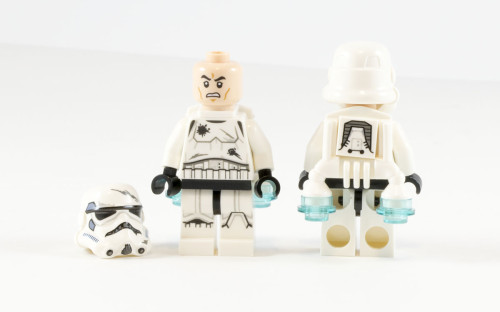 Anyway, the reason I was wondering about the designer in this case is because there’s so much that doesn’t make sense with Stormtroopers that have oil spots on their armor. We have seen Stormtroopers dirty before… twice. Sandtroopers make sense, because, like Anakin will tell you, sand gets into everything. There’s also a touching moment where Finn gets one of those “Nameless Stormtrooper, 6-Months” keepsakes put on his helmet. Otherwise, the armor is squeaky clean. It’d have to be, it’s there entirely for looks.

But I don’t get the oil (or what I hope is oil… not sure if they’re fighting zoo monkeys or something). I guess I didn’t pay close enough attention in the game, because I don’t recall seeing oil spots show up at any point for the six seconds I’m alive before I get shot in the back at my own spawn point. Oil spots like that would be deadly to a storm trooper, given that we’ve seen that it’s ineffective against rocks (Return of the Jedi) and paint (Rebels).Â I mean, oil has got to be like napalm to that armor.

Still, the jetpacks themselves are cool, and I like the little printed tile. Joking aside, the big issue with the “dirty” printing is the same with all other variations of figures like that. It limits the incentive to repurchase the set. Unless you’re looking to set up some sort of Stormtrooper laundromat vig. 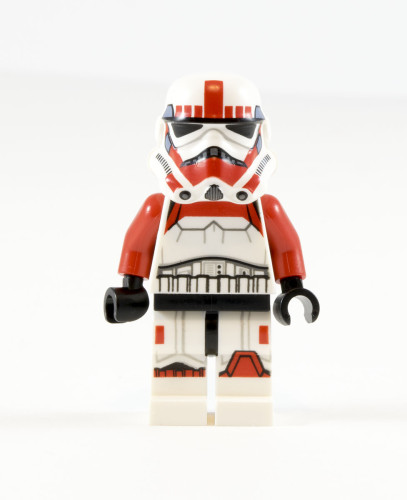 The Shocktrooper is a bit more interesting. An evolution of the Clone Trooper Shock Trooper from the Clone Wars cartoons, and a previous battle pack star. This guy pretty much only exists in a couple of video games at this point, so it’s interesting that he’s already showed up in a pack. Technically, this character is available to play in the game, but only if you willing to grind out a whole lot and can play through the frustration. The game has basically nothing in the way of customization until far later in the progression (after most of us have quit). 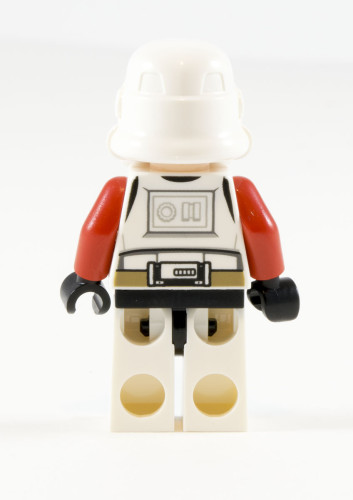 Maybe if I drink a lot and hold my breath for awhile, LEGO will make some new Old Republic sets or something (given that it’s more popular and profitable now than it was back then). Okay, that won’t happen, which is kind of a shame. The current game has a lot more promise for actually making some stuff into sets, and we never did get the best of the player ships. 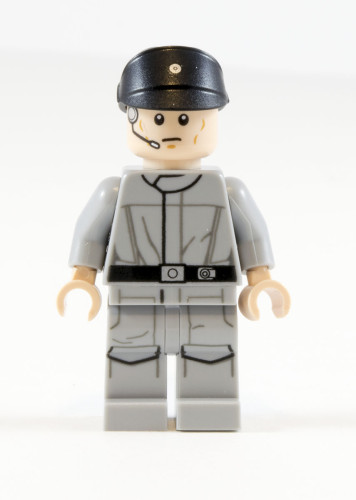 If I get multiple of this set, it’s going to be for this guy. I’ve said in the past that I’m a real sucker for technicians and other support personnel, since I feel it adds real authenticity to any scene or setting. I don’t mind the little headset head, since between all of the different battle packs, you can do plenty of mixing and matching to give some variety, and the uniforms should be… well, uniform. 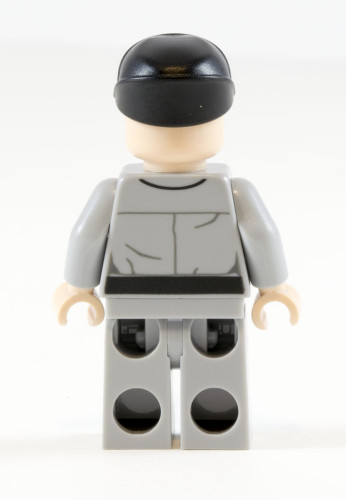 I actually really like the printing on this guy, and moving the belt onto the bottom of the torso instead of the top of the legs looks better. It also lines up quite nicely on the front, which is always great to see. The best thing about this figure is that there’s nothing about him that’s overly unique. All of the parts of the figure could be used in other ways, even the hat, which has a logo so small that you could find other uses for it.

If I was going to ding the minifig lineup at all in this set, it’s that it’s the one that doesn’t continue the variation we got in the earlier Force Awakens packs, and just includes three standard faces and this guy. No people of color (and none of them have female characters, unfortunately). I know the older movies are more lily white than TFA, but this is based on the game, and Battlefront does include troopers (on both sides) in multiple ethnicities and both genders. 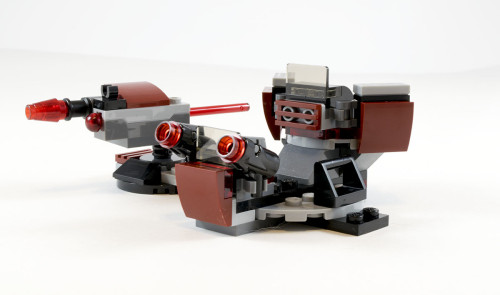 Like all of the battle packs, it has to include something to not just be an action figure, and this one includes this… thing. A gun emplacement? A command turret with a hideously exposed crew section? What a food truck would need in the Mad Max universe? I don’t know. 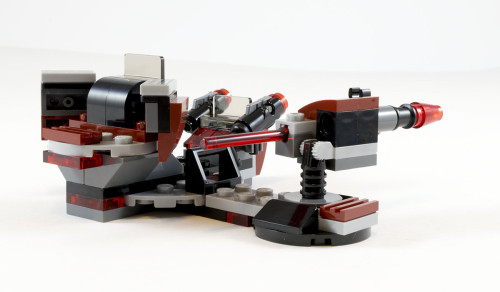 It’s made to hold two characters, and comes with a spot to keep their blasters, which is always a nice touch. There are some nice parts in the 2×2 curved low slope in dark red the grills, and a few trans smoke screens… but there just isn’t a whole lot of substance to this, even for a battle pack. It’s just sort of smacked together.

I’ve said in the past that I judge Battle Packs a bit differently from other sets. By their design (and marketing), these are intended to make you want to buy more than one of the set. So, past the minifigure lineup, build quality, part selection… there needs to be something about the set that means you’re going to want to get more of them. Compared to the other available packs, this one falls flat on that front. It’s weird, because a lot of it seems to give value, like the Tech and the red slopes, but the look of the Stormtroopers doesn’t make me want to buy more. If you want to build an army, look to the Rebels pack over this one, and hope those jetpacks show up elsewhere. Calling this one a Three out of Five. It’s not a bad pack, but it’s probably the weakest one released this year.

Verdict: 3 out of 5. You can buy 75134 Galactic Empire Battle Pack right now at Amazon. 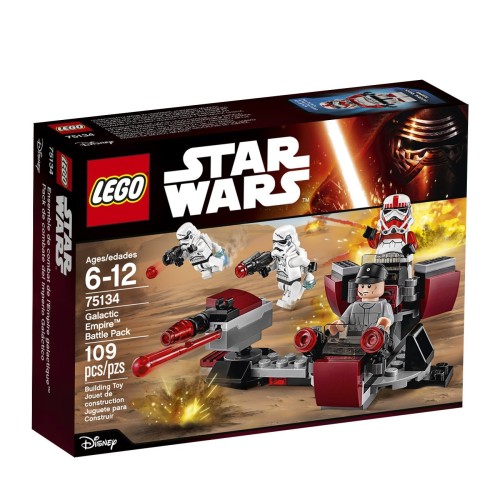