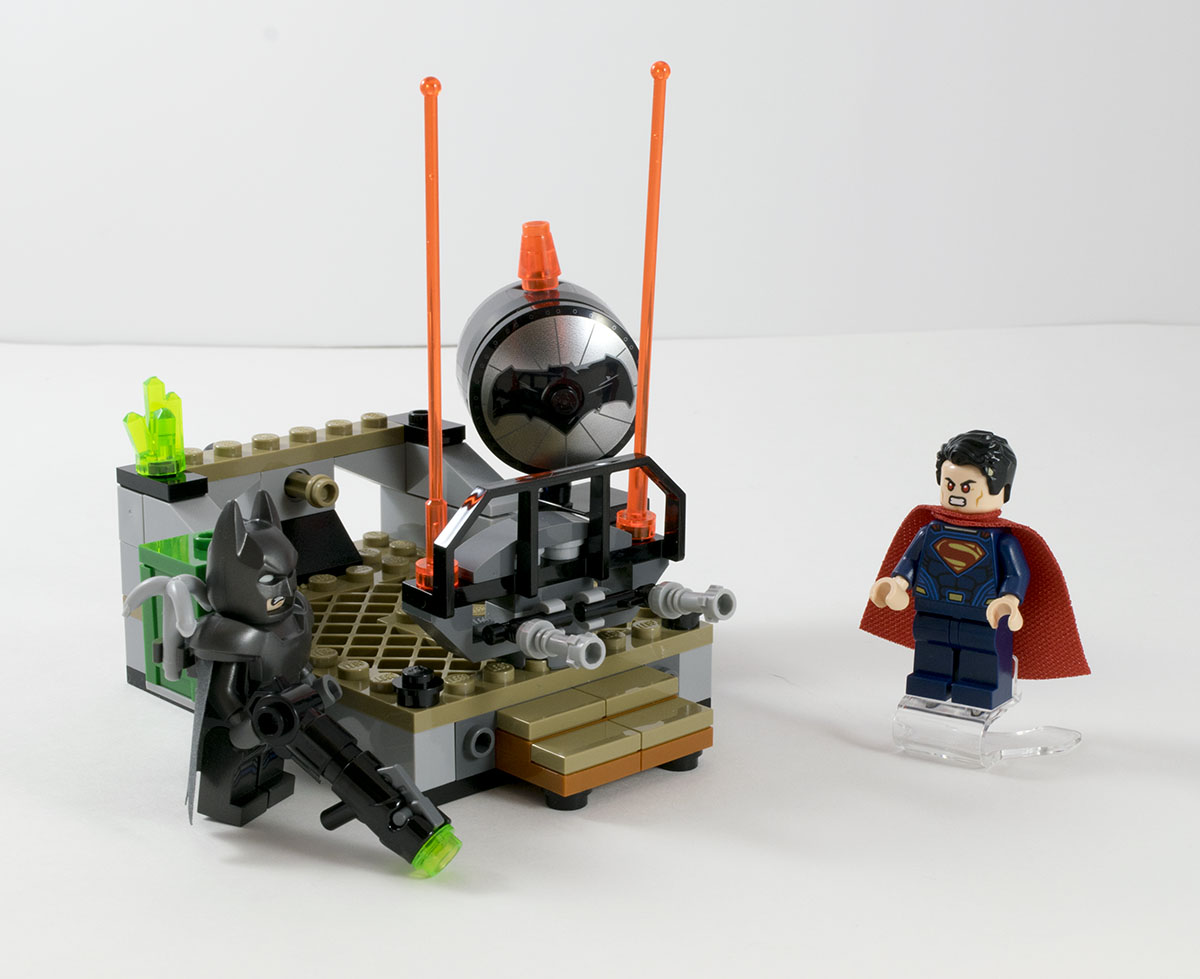 Before we get into a review of 76044 Clash of the Heroes, the $12.99 set for Batman vs. Superman… I need to be honest: I am not at all excited about this movie. It’s not Affleck hate… I actually like him as an actor and think he can do a decent job with the character. It’s not that I didn’t like the Man of Steel sets (I didn’t), or didn’t like the movie (it was okay). The comic of the same name is actually pretty awesome, so it would be cool if it hit the big screen.

Sadly, the first trailer dashed any of those hopes. That trailer is the whole reason I’m at best indifferent, and at most, aggravated, by the movie. They could have stuck to the whole two heroes fighting angle and then had the biggest surprise in a superhero movie to date, but had to wrap up the trailer and spoil the whole bloody thing. I know, I just recently ranted about spoilers, but I also said there were times where it was valid. Unless they’re pulling the ultimate fake out and they actually cast Jesse Eisenberg as MisterÂ Mxyzptlk… they gave away absolutely everything of consequence in that trailer. More than that, they basically took the over-the-top violence of Man of Steel, which was the biggest criticism, made it a central plot-point for the conflict while turning it up to 11.

First impressions are pretty important in a set… and let’s just say that the 92 parts in this set, followed by the two DC minifigs that I know are the central characters in the movie but are seemingly in every single set that gets made. It’s inexpensive, but there are a whole lot of sets in the same price range that deliver a lot of value that’s not apparent right away here. I’d warn about spoilers, but given that the movie isn’t out yet and the trailer already spoiled everything… what’s the point?

Maybe my issue with the movie is bleeding into the sets, but the track record for the DC movie sets isn’t exactly wonderful. The Marvel movies have had their share of stinkers too, but also some really great sets like the Milano or the Quinjet. The DC Justice League cartoon sets have been pretty good as well, but I suppose they’re drawing on decades of comic and cartoon inspiration, while this thing is one movie in and already calling it “Dawn of Justice.” 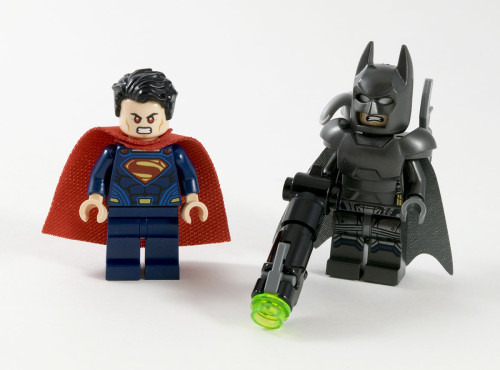 We get two minifigs in the set. Superman in his fancy new “nearly identical to the old” suit, just with a spongy cape, and another Batman figure, albeit this one armored up. One would assume you’d need a lot more armor to stand toe-to-toe with a nearly indestructible god-figure, but somehow I’m thinking that it really won’t work in the end. 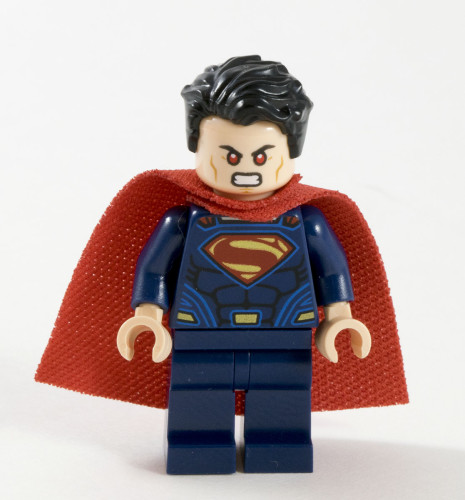 Given the events of Man of Steel, I opted for the evil red glow-y eyes. Superman has a pretty notorious reputation for being a jerk, at least when you go back to the Silver Age character (and much more passively in modern times… but still totally a jerk). While I don’t mind updated looks in general, I’ve never been a big fan of the movie look for Superman. More than probably any other character, messing with Superman’s costume seems to take something away from him. 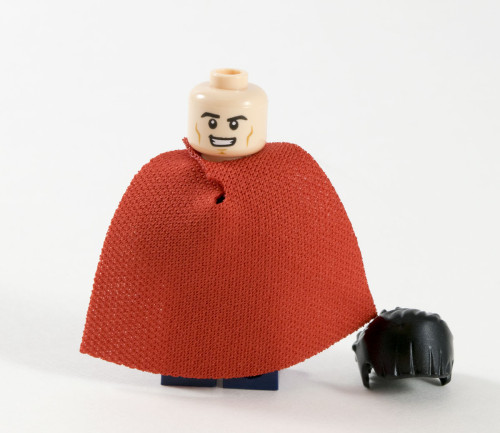 The Alt-face is more traditional face… honestly, that would be a great look for LEGO movie. I’m feeling a bit too lazy to look and see if that face has showed up before, but I might swap it on to the traditional costume (with the requisite little front-curl hair) on my display figure. 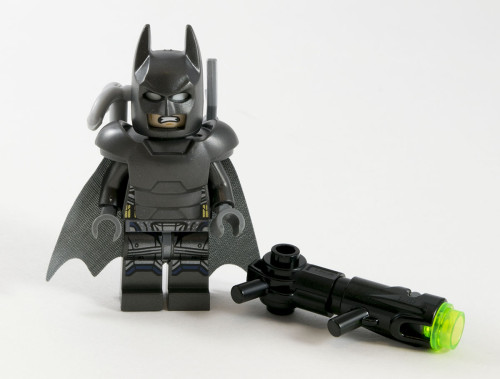 Of the two minifgures, Batman is easily the more interesting. That armor is actually incredibly slick, I like the blaster back that goes on to the stud launcher, and the legs (and even the torso, kinda) look nice with some real utility. I like the take that this Batman is presumably more about his technology power than just being very good at punching everything. Sure, that puts him into Iron Man territory (Tony Stark is better than Bruce Wayne anyway), but it’s also a pretty big throwback to a character who puts bat in front of everything. 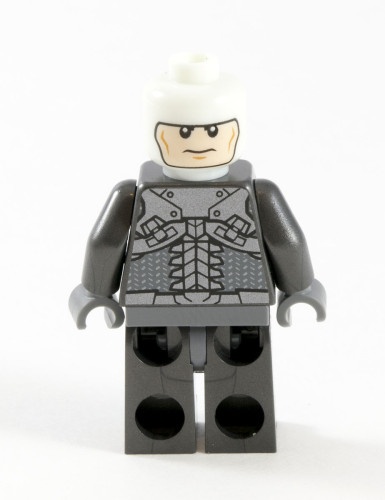 Of course, while I’m a Marvel guy, you have to give points to recognizability when it comes to DC’s biggest characters. My daughter asks me the name of Captain America and Iron Man every time she sees them (she remembers Thor though… even a three year old can get infatuated with Chris Hemsworth), but she recognizes Batman and Superman everywhere. She got some Batman/Superman/Green Lantern/Flash socks for Christmas, and now they’re the only ones she will wear. 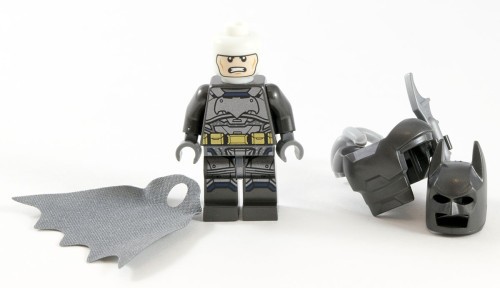 If this movie is going to be credited for everything, it’s to give us a Batman minifig that finally ditches the headband. Sure, it’s to put on a head cover, but it makes a lot more sense. I like that there’s a utility belt there, but I’m not a fan of the “understated” Bat-logo. Batman is all about branding, and that’s barely even a bat. It does give more opportunity to reuse a torso, but what’s the fun in that? Still, we get a new bat cape, in gray and with a single loop, and the armor (as well as silver batarangs).

Also, it does glow in the dark, so there is that. 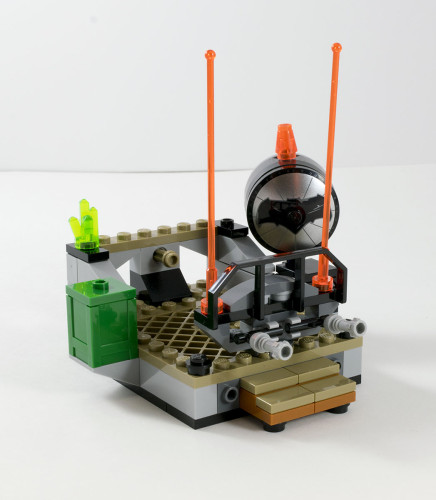 I… don’t really know what this thing is all about. The bat-symbol, I get. A piece of Kryptonite, okay. But the turret, the trashcan, and steps that lead straight to a big heap of nothing? Yeah, I don’t get at all what this is. Perhaps the product description can help us…

Armored Batman™ has glow-in-the-dark eyes and is firing his bazooka. Knock down the barrier with Supermanâ€™s Super Jumper and explode the Bat-Signal. But bewareâ€”Armored Batman could launch from the rooftop at any moment! Who will win the Clash of the Heroes? Only you can decide! 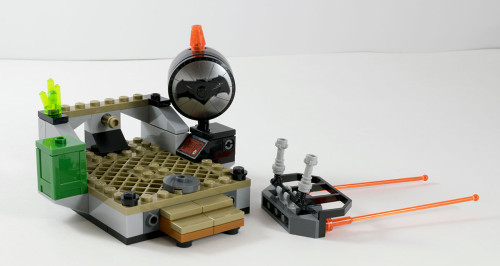 You know, that’s some quality turd polishing right there. And since when does Batman carry a bazooka? The barrier does “break” away, in the sense that it’s stuck to a single stud on a round plate. I guess they wanted to emphasize the breaking part and put those trans-orange antennae on there (otherwise known as the worst LEGO part in existence). Those things fall off if you sneeze within twenty feet of them. The batsignal is the highlight, but what’s kind of funny is that it’s just awful when you follow the directions. 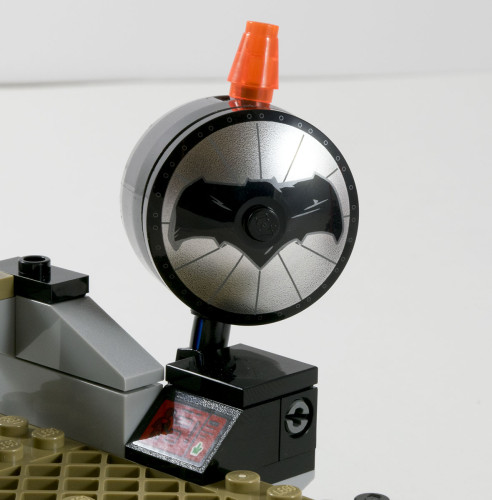 The dish spins around, and there’s a gap between them. Curiously, if you miss a part and build it leaving out the stud spacer, it actually looks nice (you know, like I did when I initially built this thing. There’s a sticker there too, and I guess you could use it elsewhere, so long as wherever you are using it has a Superman and Kryptonite in the mix. Really, the whole thing is just awful. It’s fragile, ugly, and full of terrible play features. Want to know how bad that Armored Batman minifigure launch stick function is?

That, right there, is the new king of worse playset features ever. Worse than the Weathertop flick-fire missiles, worse than the jumper bricks, and worse than anything else I’ve called the worse thing ever. I mean… come on, just call it “waste of parts.” That’s really the biggest problem with this whole set… outside of the batman figure and the dish, there’s very little to justify the money. Even for parts, there’s not enough there to justify $6, let alone more than double that. If it wasn’t for Batman’s armor, this thing would be a one, but I’m going to call it a two out of five instead. Given how often I harp on Batman being in everything, the fact that he’s a highlight here should be saying something… 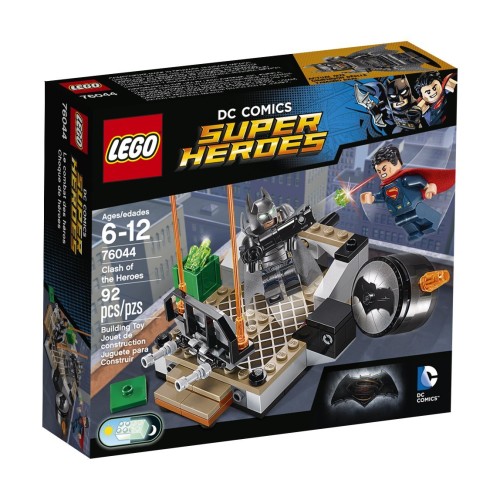