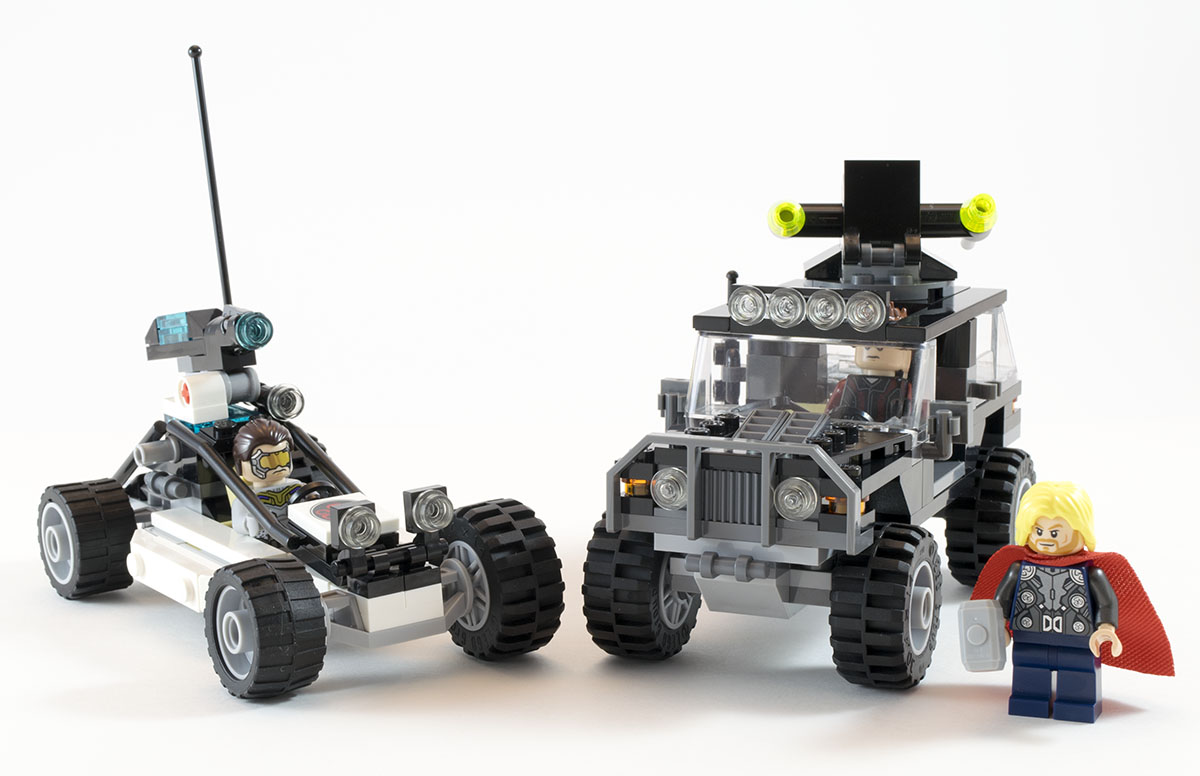 Okay, first things first… I know that the tires on the buggy are wrong in some of the pictures. I’m not sure if I put them on, or if my daughter switched the tires while playing with this (at least one of us enjoyed the thing)… but at some point, they got messed up. Such are the trials of trying to share your hobby with a LFOL (Little Fan of LEGO, a term I expect to never catch on) who also happens to beÂ so very, very, three years old.

I’ve been intending to review 76030 Avengers Hydra ShowdownÂ for awhile, it just kept getting pushed back. I know the set is a bit older at this point, but still one of the cheapest in the Super Heroes line with the stuff that was released in 2006. It’s unique for being the only Age of Ultron set without any versions of Ultron, which isn’t that terrible of a thing, yet at the same time, basically being a rip-off of the SHIELD truck we got with the first avengers line.

At 220 piece and only $19.99, the set hits a price/parts that’s pretty rare in… well, anything. It’s also the only set that’s not a Helicarrier that includes Hawkeye, and one of two with Thor. I’d like to get all worked up how Hawkeye gets left out, much like Black Widow gets locked into single sets (and the Helicarrier)… but getting shaftedÂ is sort of Hawkeye’s thing. Though, to be fair, movie Hawkeye isn’t the prepetual train wreck that comic Hawkeye is. That’s kind of a shame, actually, because comic Hawkeye is a pretty interesting character, and I would love to see Kate Bishop enter the MCU lexicon. Looking at you, Agents of SHIELD…

For those who aren’t up on the comics, there are actually two Hawkeyes in the comics right now. Clint Barton, the classic Hawkeye, who has one of the most convoluted stories for a character not named “Hank Pym,” and Kate Bishop, a younger, female, sassier, Hawkeye. Both call themselves Hawkeye, both insist that they are not sidekicks, and generally, it gets a whole lot of awkward interactions that are pretty good to read. Plus, if you read the Hawkeye series that wrapped up late last year, you can finally use Bro in company and not just be a hipster dink.

We get three minifigs in the set, a Hydra Soldier (who also appears in the smash set), Hawkeye in his fancy new dress/coat, and an updated version of the Captain Kirk’s dad. We also get one of those awful jumper bricks, because some people like watching their minifigures flop forward awkwardly and smash into the ground a couple of inches away. Interesting, the new Batman vs Superman sets dedicate a whole page to putting these guys in the stand, which tells me that my prediction that those things are going to break figure feet is coming true. 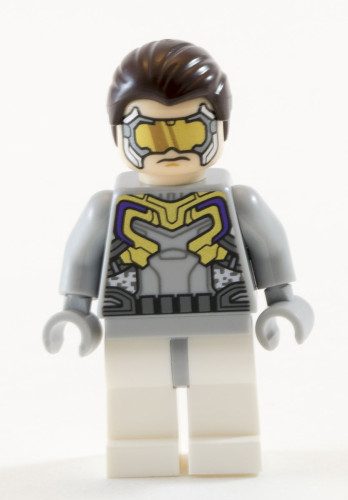 I usually like henchmen, but Hydra didn’t survive the opening scene in Age of Ultron. Sure, they’re still kicking around in other things, like AoS and likely Captain America: Civil War… but in the last Avengers movie they were only there to get shot and die. At the very least, you think they could have put them in red shirts or something. 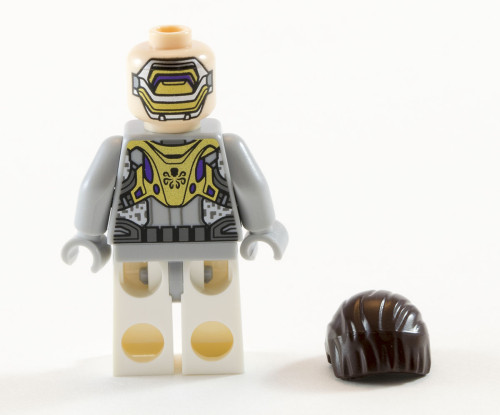 The characters are obviously infused with Chitauri technology, which wasn’t really covered in the movie. It was covered a bit in Agents, but mostly it served to give us the scenes where that show when from meh to “HOLY CRAP!” in the first season. I still don’t get the printing on the back of the head. It’s not really a mask, it’s more like accent, but it’s covered with the hair, so it seems somewhat pointless. 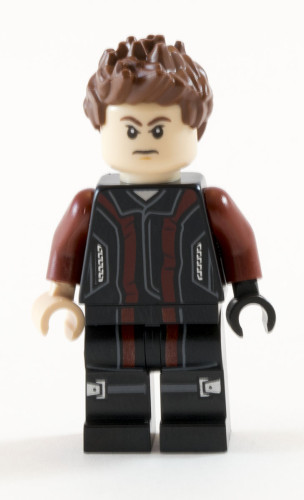 I’m not sure if LEGO has ever quite phoned in a character like Hawkeye in their licensed sets, but this guy is pretty phoned in. The head is as close to generic you can get without the stock smiley face. Of course, perhaps it’s accurate given thatÂ Jeremy Renner is one pretty nondescript dude. I mean, who even remembers that Bourne movie he did? Also, in interviews, he says the word “man” way too much. 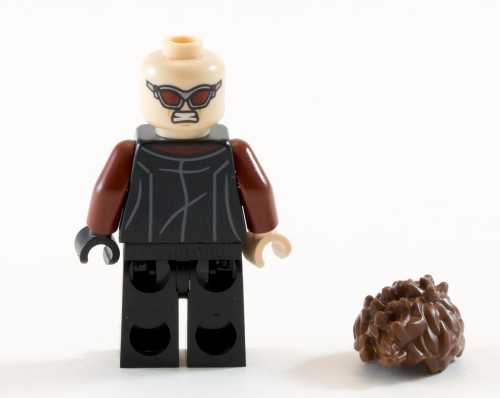 It’s kind of a shame that he feels like he gets a short stick here, because his line in Age of Ultron, while kind of goofy, was pretty accurate to something the comic character would say. Plus, it was kind of self aware comedy to the absurdity. I don’t think we’ve ever seen him wear goggles in there, but the alt-face is a pretty cool face to have. I think it’s also time for LEGO to look at that hairpiece and take it from the 8 it currently sits at and dials it down to about a 3. We need some messy hair, but maybe not “I’m trying to emulate standing in a hurricane” messy. 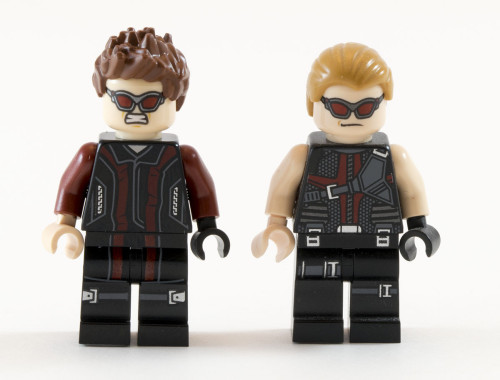 I like the outfit of the last Hawkeye a bit better (though I like the lower legs on this one more… it’s the upper leg stripes I don’t care for). The original also gives us more options for reuse, but I’ll say the hair on the newer one looks better. I mean in general… original Hawkeye has the hair of that one slimy guy from every 80s movie. 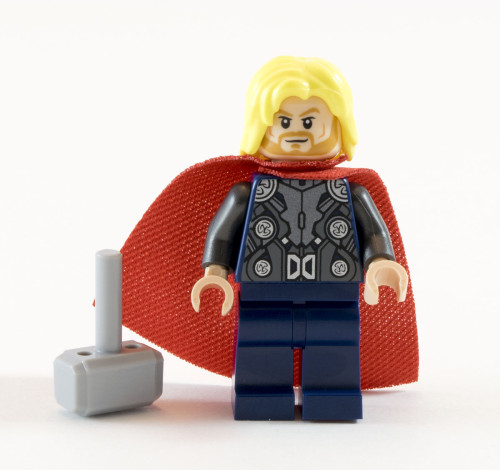 You know, I think the biggest issue I had with Age of Ultron is that most of the movie just isn’t memorable. For instance… outside of the whole hammer scene, which we saw in the trailer… what did Thor do in this movie? I remember a dream sequence where everyone was dead and he’d fallen down a well or something, but that was about it. 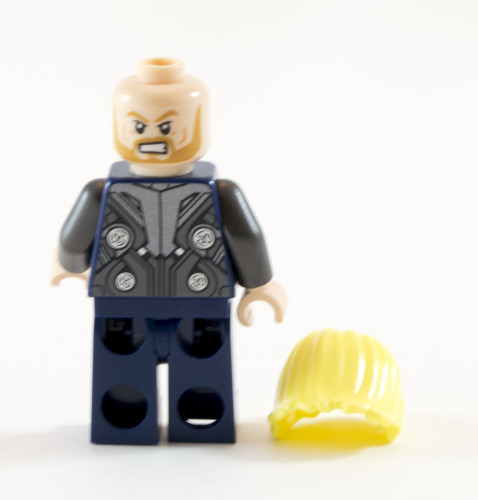 He also seems to have the power to make pictures of his angry face slightly blurry. It isn’t covered in the comics very much, but it’s there. This is a slightly-different face than the last version, and the torso is a bit different. Thor was staying on Earth, but apparently was also visiting tailors on Asgard. 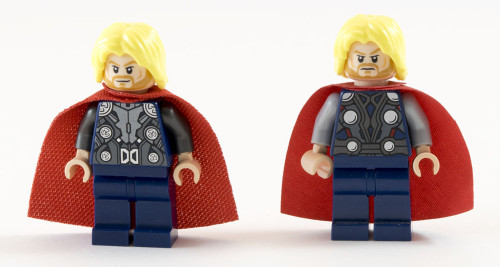 You can see the slightly different face between versions of the figure. The newer one has more of a little smirk upwards, the other one more of a scowl. I suppose that matches the arc of the character. The cape is also the soft, spongy material instead of the old style. They feel better, but are a lot more fragile. I haven’t had cause to replace one yet… but my daughter has also been eyeing these a lot lately, so who knows what tomorrow will bring. 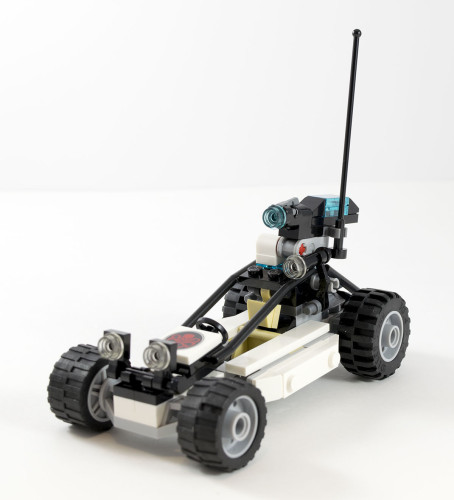 There are two components to this particular set: a dune buggy I don’t remember ever seeing (they’re not especially useful in Bavarian forests), and a truck I don’t recall our heroes ever driving. They may have existed in the movie, there were a lot of explosions at the start, but mostly I just remember a tank. I do love the audacity of a criminal, secret society that must operate in secret but feels the need to brand everything. 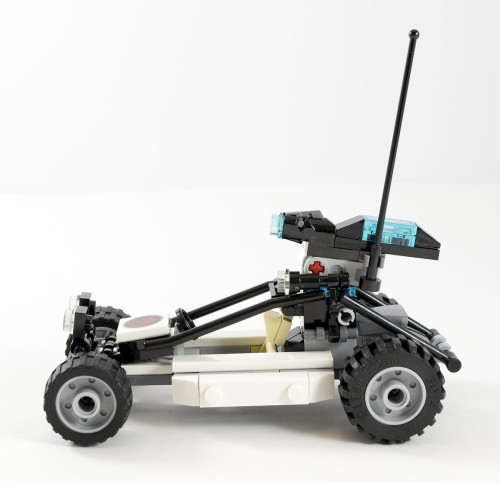 There isn’t really much to like about this vehicle. The chair is kind of interesting, but the whole thing is basically held together by hope and flimsy parts. The gun doesn’t connect to any bricks, that red friction pin sits in a technic axle hole. If you move that torch part on the droid arm down… it falls out. 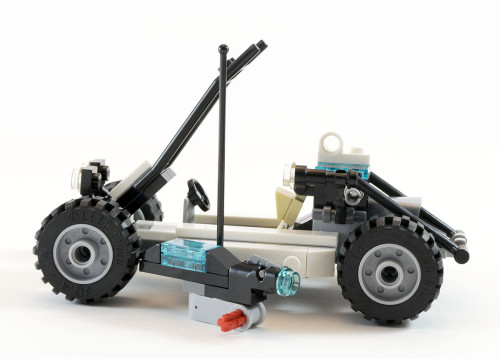 If it was just part of the gun, that wouldn’t be as big of a deal, but it’s also what holds the whole roll cage sections together visually. There’s not a lot of parts to love in the build, since there’s just so little to it. Really, the part you’d want to have more of is the Hydra sticker on the front. 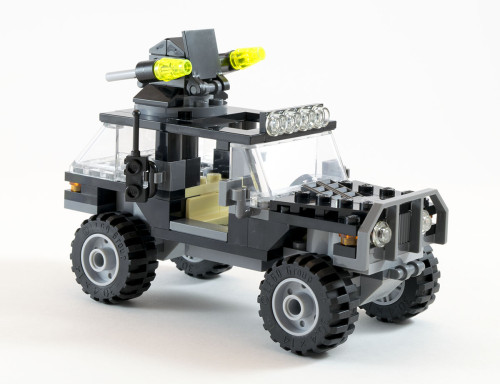 The truck is similarly light, though not as “what the…” in the build. It’s basically just a stock truck, but comes off as far too blocky and simple. Most of the work goes into building the turret on the top, which I sort of wonder about. We never saw an Avenger’s branded truck… just the Quinjet and tower. 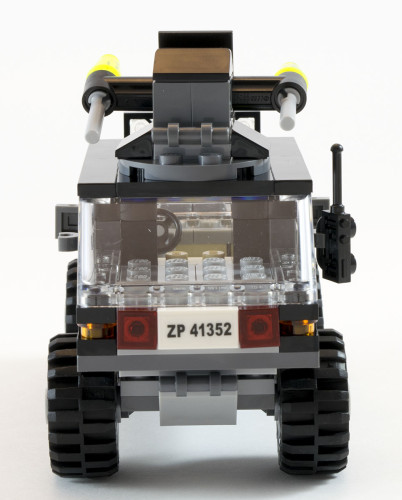 Who is operating that turret anyway? Thor doesn’t exactly need a ride, as he can fly. Hawkeye is busy driving the thing, and Black Widow was doing what she does best: kicking all sorts of butt (sadly not in the same screen, and in far too few toys), though not in this set. There’s a handle to help turn it as well… but what is the operatorÂ standing on, the back window? 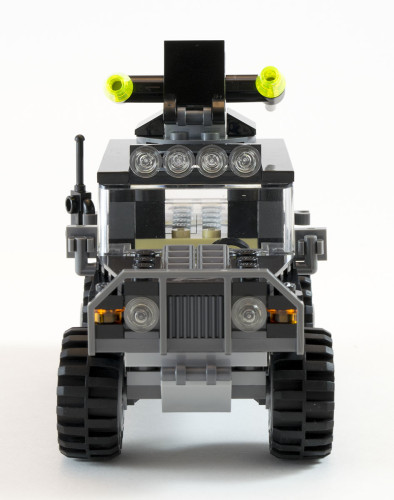 This is one of the more uninspiring vehicles that I’ve built in a long time. If this was a set ten years ago, I think I’d be a bit more forgiving of the general shape and feel of the thing… but LEGO has come a long way since then. It’s a pale shadow of the earlier truck set, which didn’t have to split parts between two different vehicles. 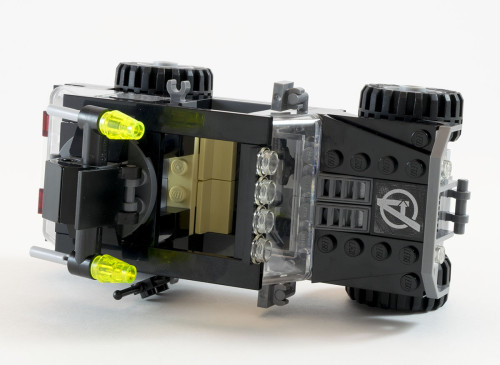 This set has more pieces yet gives us far less stuff. A lot of those parts are chewed up in things like those lights, stud launcher parts, and little parts we all have a billion of. The inside can theoretically sit two, though not securely. I guess it’s not a terrible build, overall, just an uninspired one.

Part of the reason it took me so long to review this set is that it’s probably the least necessary of the Age of Ultron sets to buy. Thor is available in the tower set (the only one that I haven’t purchased), Hawkeye is available if you have the coin and get a Helicarrier (which is a great set, just expensive). The Hydra guys are mostly just there as evidence that LEGO didn’t see pretty much anything in the movie before making this set. Even at $20, the lackluster makeup makes this aÂ two out of five. Just not much special… I’d spend money elsewhere.

Verdict: 2 out of 5. You can buy this set, which is sitting at a healthy $15.99 at Walmart.com, and may offer pickups in store. You can also find it on Amazon.com. 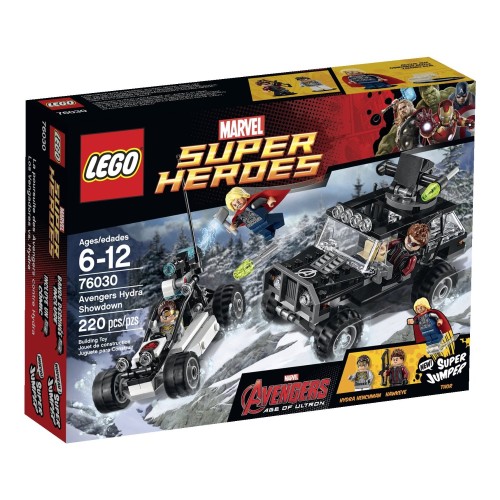