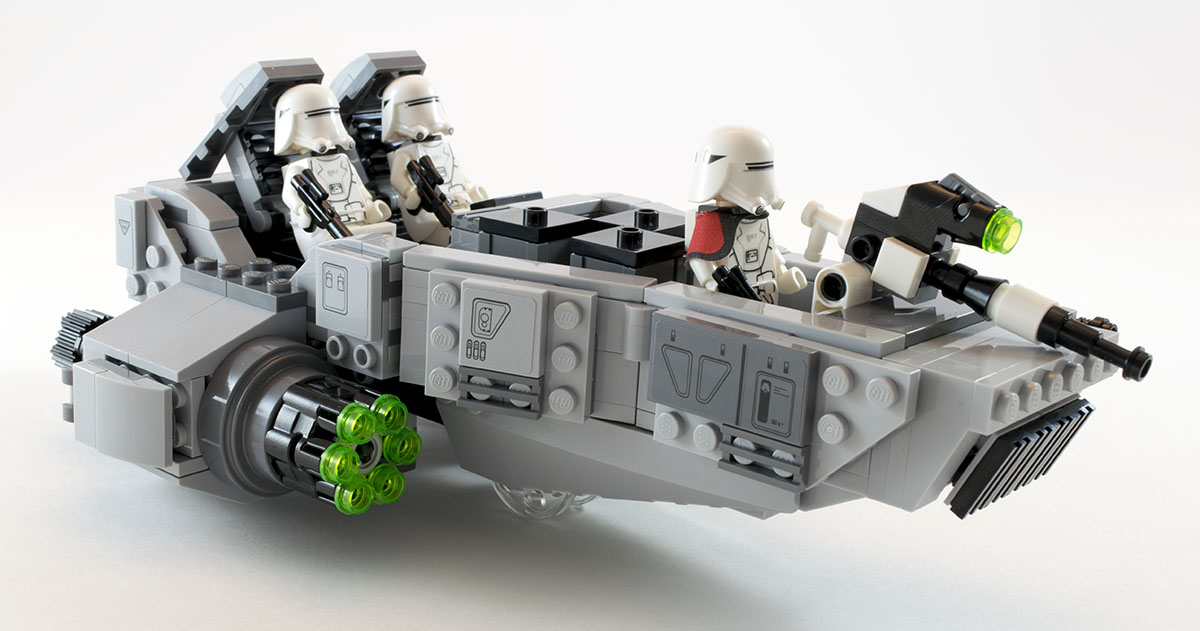 When we first saw the list of the Force Awakens sets (which, of course, we are supposed to pretend we didn’t see), there was little shock that almost all of the sets had some sort of ancestor in the original trilogy. The real shock was that the Snowspeeder, the perpetual releaseÂ of the OT Lego lineup,Â Â has apparently decided to switch sides and join the First Order. I guess getting left behind on Hoth along with the smaller equipment really chaffed them a bit.

I can’t say as I was really looking forward to reviewing Â 75100 First Order Snowspeeder, because I’ve been snowspeeder-d out for some time. Once we had the “official” pictures, it became clear that this ship wasn’t connected to the old oneÂ at all… it was a completely different beast that wasÂ notable for having a higher piece count ratio, 440 parts at $39.99, than the rest of the lineup. It also included the updated version of Snowtroopers, otherwise known as the troopers that could actually hit something, including an officer with a paudron.

All of the First Order sets seem to be around army building, and this one is no different. There are only thee figures that are all identical, but there always seems to be utility in attack craft. This is also the only vehicle that hasn’t appeared in any of the teasers or promos, so we really don’t know how it fits into the movie at this point.Â So maybe I had to revisit some of those early preconceptions; I mean, a set with that kind of part-ratio can’t possibly be a let down, can it?

I’ve done a lot of reviews for FBTB over the years, and the hardest thing to really quantify in a review is value for the money. Over the years, the old standby is the parts-per-piece ratio, which is a long time past it’s usefulness… 10 cents was always the magic number but simply unrealistic.Â The big problem with that ratio was that it treated every part as if it was the same value… so a super-rare part like the UCS TIE Advance Windscreen or the original UCS X-Wing canopy were the same value as that 1×1 lime green stud that infests all our parts bins.

Back in the days when you could only get parts by parting out sets or going to 3rd parties who were parting out sets, price-per-piece ratio was a bit more reasonable. However, we now live in a world of Pick-a-Brick cups, extra parts galore, and stud-launchers that dump all sorts of extras of certain parts on to the market.Â All parts are not created equal,Â and it only gets worse in the world where everything from books to video games comes with exclusive minifigures.

Speaking of minifigures, this set comes with three that are unique to the set, and one that’s “unique-ish” in that it has a command pauldron. All figures have a white skirt as well (I know, they’re called kamas, but that’s just because they won’t admit they only bought half a skirt). There’s also a neck bracket that keeps a printed tile as a backpack, and that new helmet that is just… meh.Â Compared to the Stormtrooper evolution, this is the one feels a bit more phoned in. It also makes me wonder what this armor offers over the regular armor… obviously not a camo pattern for the snow. I guess smaller eyes to freeze over? 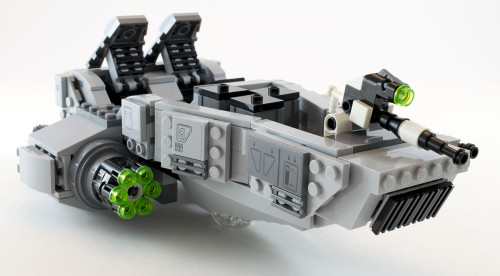 We had a debate in chat if this was a boat, a wagon, or a sled. I was originally on the wagon path, because it felt like if you put Radio Flyer on the side and a handle up front you’re a red paint job away from a feel-good 80s movie. But looking at it now, I’m more to the sled look, and need a Jamaican Bobsled team, green paint job, and John Candy to make it work. I get the boat impression, as I guess JJ took that whole “Imperial Navy” thing rather literally when designing the new stuff. 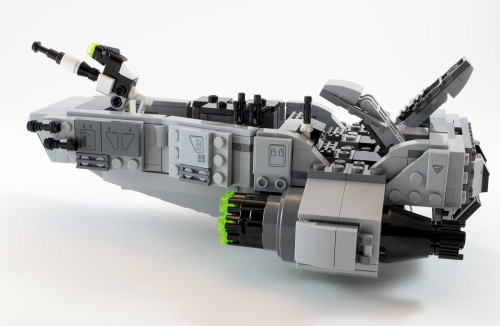 I use the term design loosely, as while both of the First Order navy ships are the biggest diversion from the original stuff… both are fairly ugly and basic. The other one at least had play features and silliness… this one is basically a big blob of parts for Snowtroopers to cruise around at night in blaring music loudly and getting fists shookÂ in their directions. 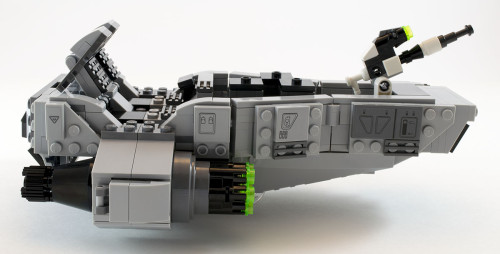 That angle above really isn’t the camera… the build sits at an odd angle like that because of the wheel placement (more wagon than sled in that respect).Â We haven’t seen this ship yet, so we have no way to really judge how accurate it is, but I have to hold out hope that it’s just an awful design. Otherwise, LEGO has failed at building an evolution of the ship they’ve made like eleven kajillion versions of. 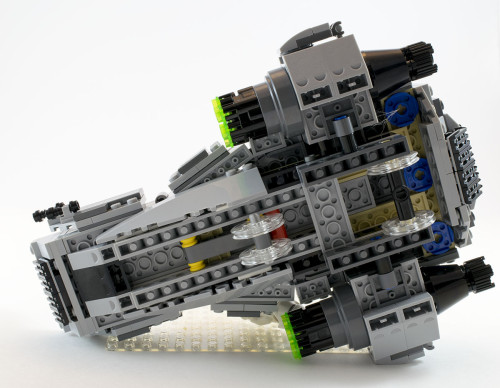 The wheels are honestly what just ruinÂ this set, more so than wheels did on the Landing Craft (which felt more like an MTT style build). In part, it’s because they’re so open and exposed, but mostly because it makes the set just look wrong. If you’re trying to set up some sort of hot wheels look, this may be the set for you, but otherwise, it feels clunky trying to roll across the floor or table. It’s presumably a hover craft, and it rolls too easily on a hard surface, and barely at all on carpet because the wheels are too thin.Â Maybe I can ask my buddy Clark for some of that newÂ non-caloric silicon-based kitchen lubricant his company was working on and see how fast it will go down a hill… 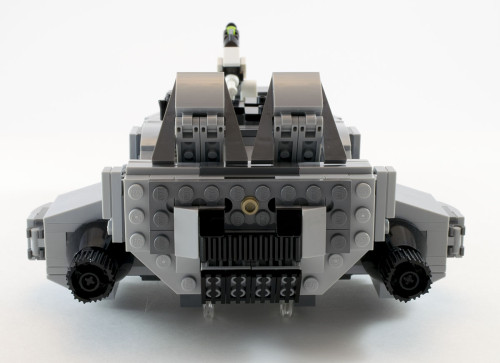 Even on play features, things are a bit light. It comes with the stud six-shooters, which are still cool… once, and it has some spots to store gear. The gun on the front is okay, but it really feels odd to have the flick mechanism for the gun placed so far away from the guy who would be firing it. The whole set, despite the part count, just comes off as underwhelming. Some good stickers for details on other things, and some parts that would be useful in ship building… except they’re all fairly common and that diminishes value.

This set is probably the worst abuse of part count that I’ve ever seen. With the two 6-shooter stud launchers and a stud-launching blaster, a huge amount of parts are tied up in just 1×1 round studs. 34 of the 440 parts are just the trans-red or trans-green studs. 20+ are tied up in 1×1 plates, tiles, or cheese slopes. The value of this set erodes very quickly because most of what you get is stuff you find other places, often as the extra filler, or it’s the kind of parts we’ve accumulated a whole lot of over the years.Â This set may be the ultimate leftover parts build ever, which is amazing since it’s official set. Could be a cool contest alt-build fodder in the future… who knows.

There are some cool things, like the Snowtroopers, but the ship itself is just basically a wagon. An-open top wagon that hovers over snow and makes it comically easy to head off the attack. Seriously, Resistance, just invest in a couple of decent grenade launchers and you can stop whatever snow planet invasion is going on. Between the excessively awful ship and the poor parts value, I’m going to rate this guy aÂ two out ofÂ five. There are better places to spend your money on Force Awakens sets… and by that, I mean pretty much any of the other sets.

What I didn’t likeÂ

Verdict: 2 out of 5. Quantity cannot make up for quality. You can pick up 75100 First Order Snowspeeder, or better yet, pick up a couple of Rey’s Speeder or put the money towards the First Order TIE, right now on LEGO Shop@Home. 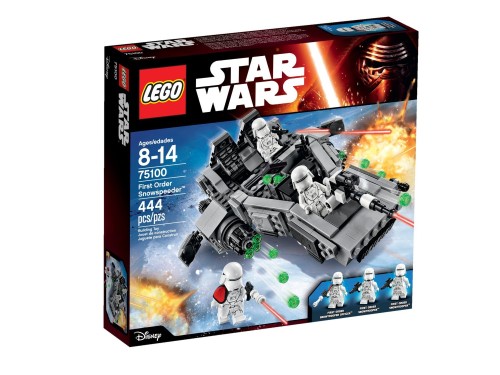