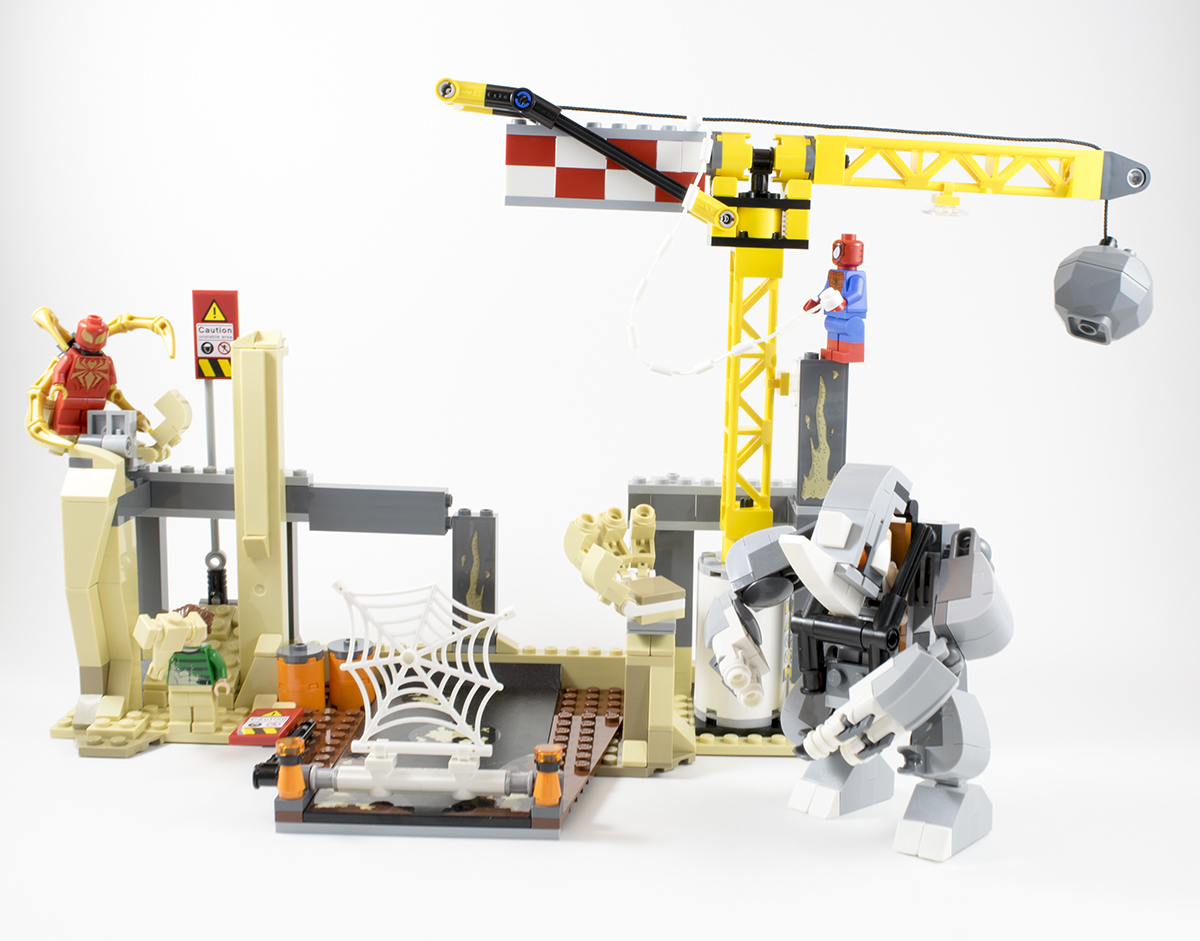 Every time a release cycle comes up, there are always some sets that you just know you’re going to buy. The Mystery Machine, the Miles Morales set, and Rey’s Speeder were all sets I knew I was going to buy. Sure, I was going to review them too, but even if I didn’t do stuff like this I knew I wanted them. LEGO knows their market well, I suppose.

Of course, the reverse is also true… there are some sets that you knowÂ that you don’t want regardless of the sale. It’s especially hard when you’re trying to expand your selection of minifigs and parts, like I am always trying to do with the Super Heroes line. If I hadn’t signed up to review 76037 Rhino and Sandman Supervillain Team-Up, I likely would have just ignored this set and grabbed the figs I wanted on the aftermarket.

Let’s call it the anti-excitement set. A tan blog, yet another Spider-Man set, and just a pretty boring looking playset… it still was a 389 piece set that ran $39.99. It also had echoes of one of my all-time favorite LEGO sets, 7905 Building Crane, even if it’s a very faint echo. This set marks the first time Rhino, Sandman, and Iron Spider grace a Marvel set, and gives us aÂ slightly different Spider-Man, so who knows, maybe there’s reason to grab this set…

Or, you know… not really. This set is currently carrying a 3.7 on LEGO Shop@Home… if you have ever compared the rankings, which typically range in the 4.7Â to the BESTEST SET EVAR! range, a 3.7 is a fairly bad score. Playsets are always savaged a bit harder by the AFOL community, since they’re designed specifically with kids in mind, but it’s not hard to recognize the difference between a really good playset and a pretty awful one. 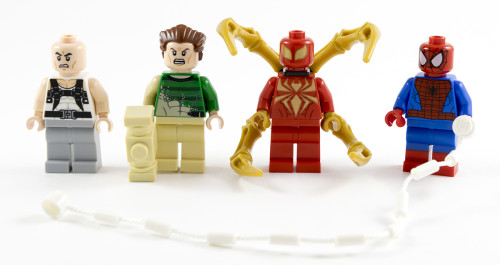 As I mentioned above, we get four minifigures… all unique to the set. Spider-man has an impressive rogues gallery, so it’s nice to see them dig deeper into the lexicon to put baddies into sets other than Doc Ock or Green Goblin. 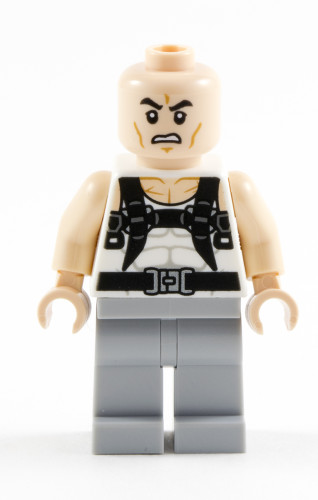 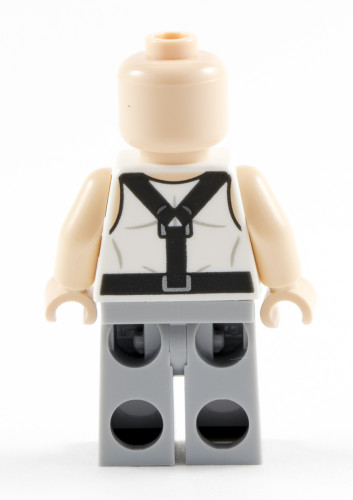 Rhino is easily the oddest thing in this set. First off, he looks more like Carl Creed than Rhino. That or John McClane, which would be pretty awesome. I’m not sure which version of Rhino this is, the armor isn’t anything I’m aware of. 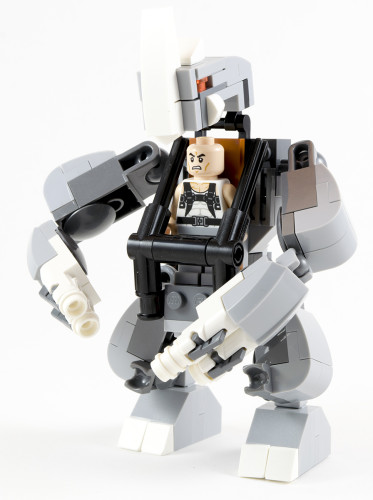 In the Ultimate Cartoon, comic, and mainstream comic, Rhino does wear armor, but it looks distinctly like, you know, a Rhino. This thing looks like some sort of weird mash-upÂ cosplay by someone who’s both into military outfits and Aliens. The head lowers down and covers the guy and includes a horn, and I suppose there are also toenails… but I don’t see the purpose of either one. 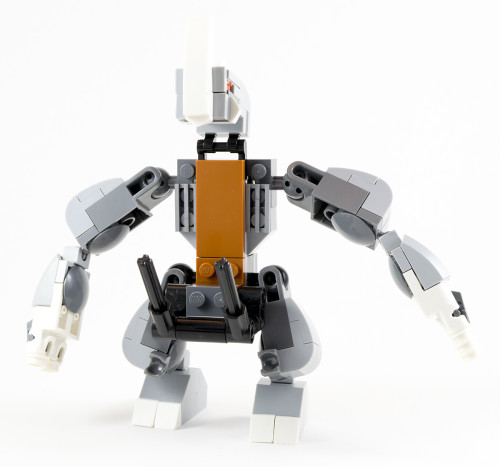 For those keeping score at home, this marks the third set this year with a mech in the Super Heroes line, after the Batmech and the Hulkbuster Armor. This is easily the most inferior of them, but it does have white stud-shooters and… I guess mixel joints? 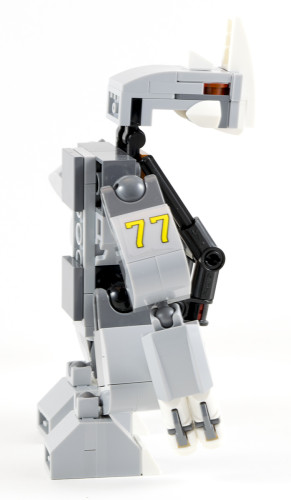 I guess this is kind of the Neanderthal Rhino, with the stubby legs and long arms (not to mention the unfortunately pronounced forehead). The real nifty part is the number sticker, for those people who like building army stuff, because that has a lot of use on better military hardware. 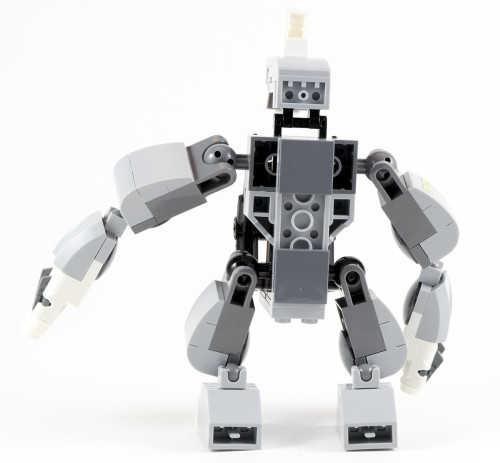 I know Spidey doesn’t kill or anything, but something about the design of the armor seems like it’d be fairly easy to shut down. There’s the fact that the pilot is terribly exposed, so Spidey could theoretically just yank him out of the pilot’s seat. 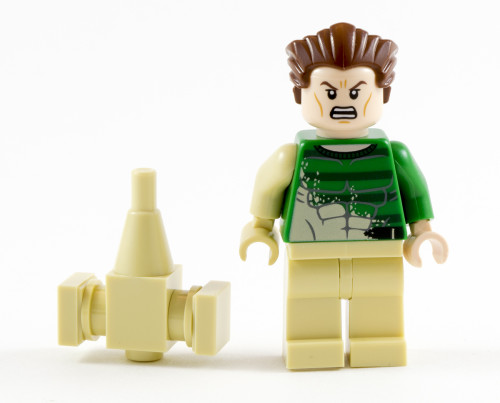 Sandman is probably the most creative minifig I’ve seen in awhile, and actually integrates throughout the playset. I kind of wish we got two versions of the torso, one just with the green and one with the sand, but this certainly is better than nothing. The color mix is nice, keeping with the sand look, though how does he turn his shirt green like that? Is one of his powers being able to turn clothing into sand? 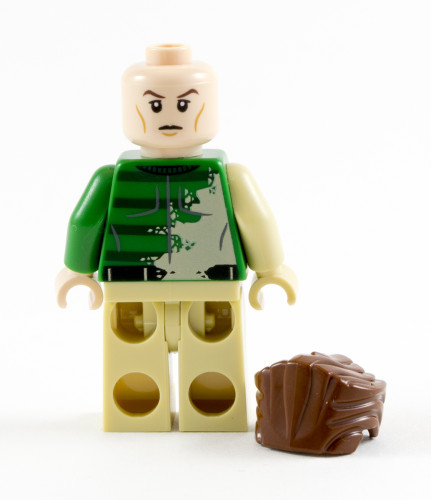 The primary-face is nice, with a serious look that I guess is more homage to reluctant Sandman / Guy from Wings than the more crazy psychopath from the comics. While we’re looking at the clothing effect, I also have to wonder how his belt stays cinched when part of it has already turned into a kid’s sandcastle or a cat’s restroom. 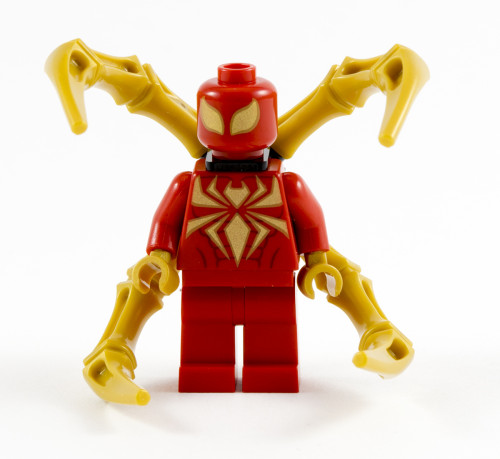 Iron-Spider is a curious addition to the set. I’m not familiar enough with the cartoon to know how he pops up, but in the regular comics, this is basically Iron Man armor that’s also spidey-ish. Peter wore it for awhile, until he ditched it after switching sides in the Civil War, only to go on to an even worse comic series where he traded his marriage and daughter for a couple of more years with his elderly aunt. 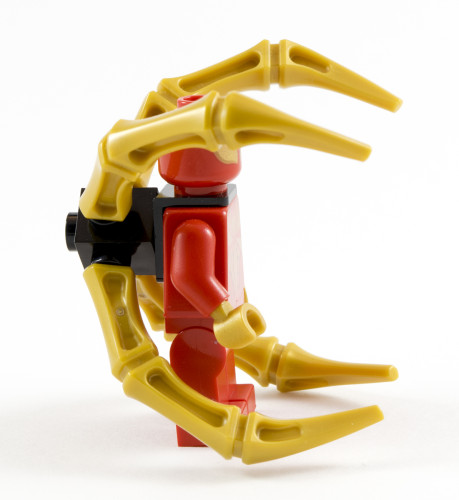 The figure looks decent, but it’s very awkward with that large brick on the back. You can lean him forward a bit and get him to rest on the arms, otherwise, you’re going to have to stick him on some studs to keep him upright. Unfortunately, the back is also held on just by a stud connection, not with the new pin backpack, so it’s kind of easy to knock off as well. 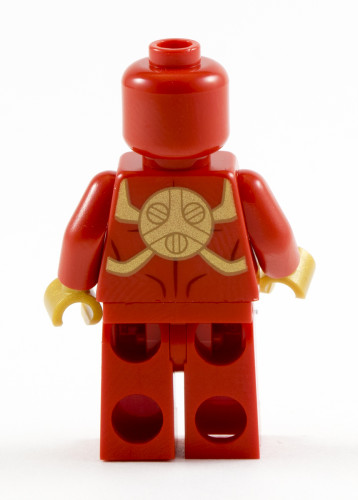 The figure himself is pretty nifty, and I like the back without it off. You can get some sort of spider-ninja, I guess. I’m not a huge fan of this character in the comics, but this does put me one step closer to getting my own Spider-Verse thing going… now I just need some Agent Venom, Spider-Gwen, Spider-Ham, Spider-Man 2099, Mecha-Spider… okay, it’s a tiny, tiny step closer. 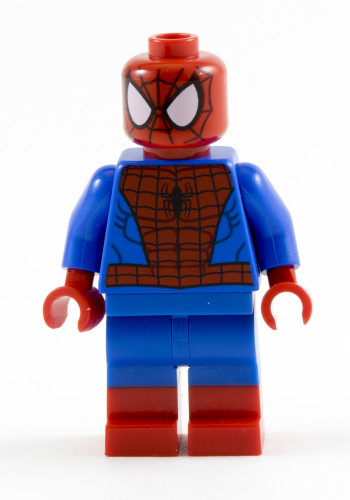 I guess they way you keep Spider-Man fresh is to introduce two-tone legs and a hideously ugly costume. I’ve never been a huge fan of LEGO spidey, simply because I thought there was too much muscle definition. Spidey was fairly rip, but he’s also slight (unless you get some weird 90s comic where he should-presses Grand Central Station). 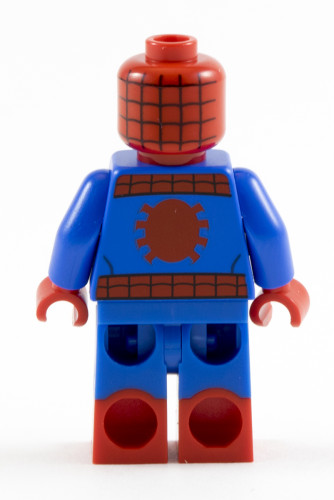 The rest of him is the same, so unless you really want those legs, it’s hard to recommend the set for this figure. Marvel Super Heroes is just lousy with Spidey minifigs. 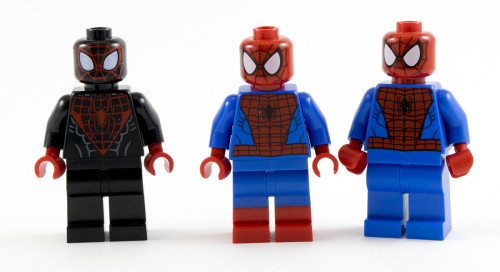 At least we have Miles, though, so there’s some variety. I guess the newer legs are more accurate, since they’ve never bothered to get the web pattern on the full outfit, but still, he looks more like he’s wearing Spider-Man pajamas than an actual costume. I think the Miles version does a better tribute to the character, overall, than the Peter One, as well. 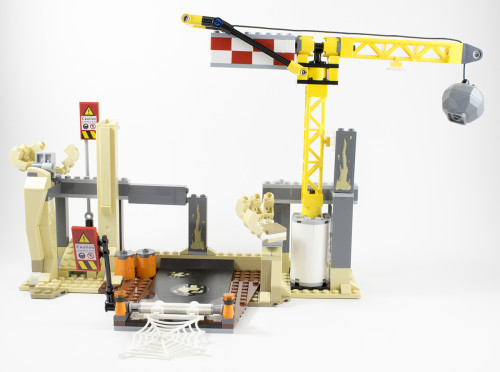 Of course, this is a playset, apparently a construction yard that features sand and a crane attached to a water heater, which seems like an exceptionally bad idea. I’m also not sure what kind of yard would have a rock attached to a crane, and exposed high voltage lines and canisters. 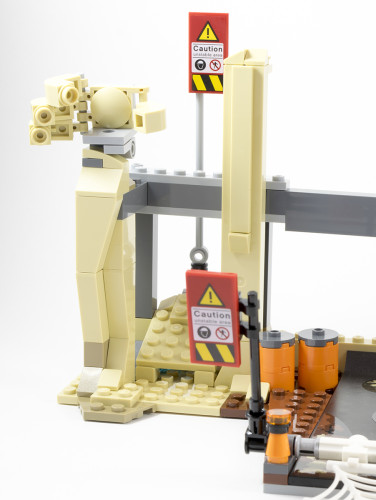 The theme of the set seems to be around Sandman’s excellent choice of fighting venues and poor choice of banking solutions. Like the Scooby-Doo sets that stash treasure everywhere, there’s apparently some draw to dastardly villains burying their treasure in somewhat easy to locate places. 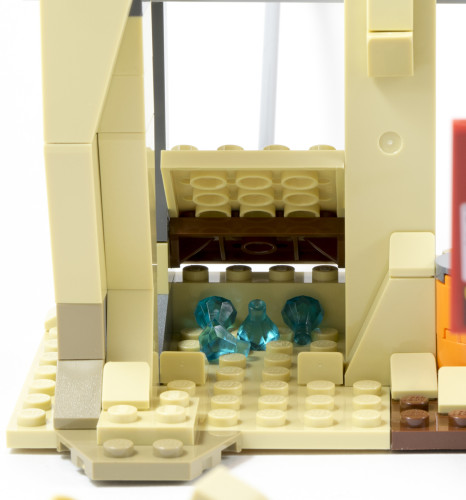 I mean, he’s not even using a bag. Ziplock those jewels or something, man. 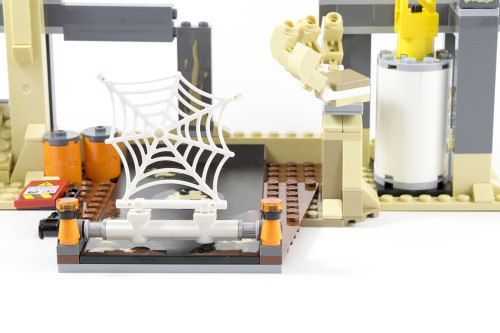 There’s a spot with the webbing that controls flipping the sign, or vice vera. I really don’t get this, since we never really see Spider-Man actually spinning webs (unless he’s setting up for a date), and why is there such a part’s investment into a feature that makes hardly any sense. The Sandman hands would be cool, and are a good idea, if they weren’t so fragile. That connects to a single stud 2×2 jumper plate, and it’s prone to falling off if you touch it. 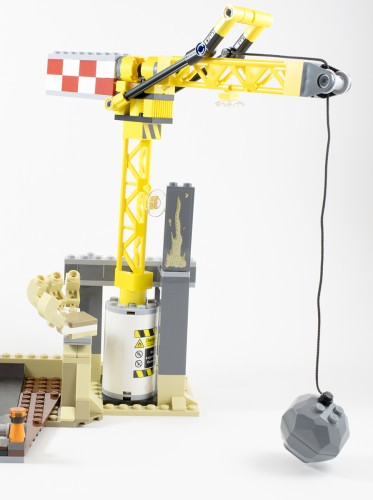 The crane itself is probably one of the most awkward and fragile things I’ve built in a long time. There is some support, but it’s just so heavy it’s easy to knock over or knock off. It also doesn’t really retract or reel in, it just slides back and forth to lower the brick. I really don’t get what this is all about, it it seems like they could have used all of these parts to make something… I don’t know, better.

I know, normally I do a lot more coverage on the sets themselves, but this set is a reminder that first impressions are usually somewhat accurate. This isn’t the worst set I’ve ever built (looking at you, Wookie Catamaran), but even by playset standards this is bad. The minifigs, while unique, just aren’t all that special. There seem to be a lot of parts, but a lot of them are tiles, 1×1 plates, and things like the webbing or technic structures. The only highlight of the set itself would be the sticker sheet, as a lot of those things could be used elsewhere. Worse than the parts, though, is that the playset features honestly don’t make a lot of sense.Â The hands are the best idea, but the whole thing is simply just too fragile to really be decent at any of the play stuff. All of those things wrapped together puts this at aÂ two out of five. You’re going to want a very deep sale before you consider this unless you’re a pretty hardcore Super Heroes fan. There are better sets for the money out there. 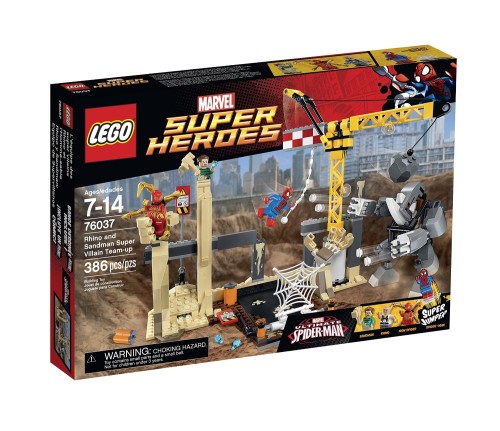