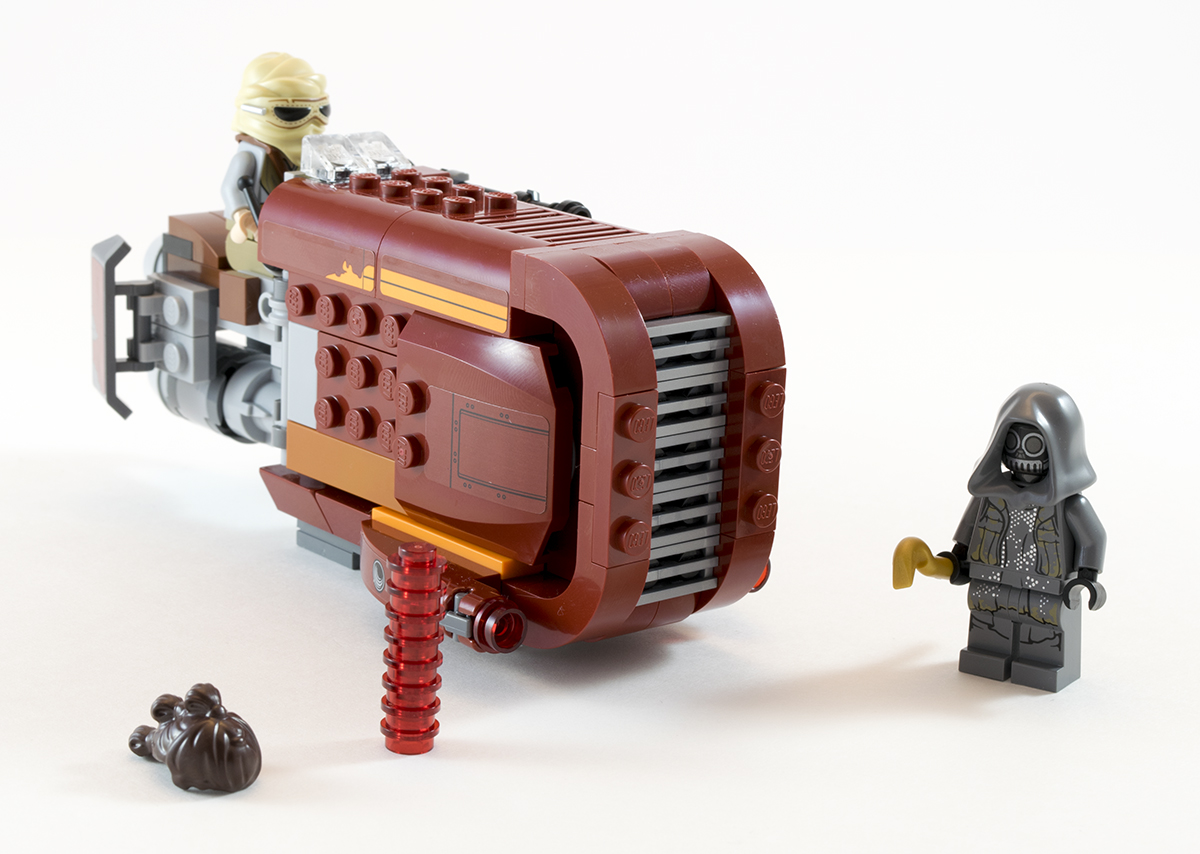 When the Force Awakens trailer first launched, and after I’d watched it a few dozen times in a glorious mix of trepidation and fanboy glee, the vehicle that I latched on to more than anything was the ludicrously absurd, yet awesome, speeder that Rey was driving. It was a wonderful mix of Star Wars feel, in a classic-ish setting, and that one absurd vehicle that J.J. Abrams has to put into all of his vehicles (remember that cop speeder in the Star TrekÂ remake?). Â It was also nice that we were getting one of the main characters, a woman at that, in the cheapest of the Force Awakens sets. We saw her in the trailer, so I was fully prepared for this to be in a much larger set, or ignored entirely. [Edit. Thanks Gingerbeard ManÂ for pointing out I violated Nerd Commandment #3 and mixed up Trek and Wars when writing this]

At $19.99 (or $21.99 if you pay the penalty for shopping at Toys ‘r Us… don’t judge me, it was less than the gas I would have used to drive to somewhere else for Force Friday), this is by far the cheapest set in the lineup at half the price of the next cheapest set. For our hard earned money, we get 193 pieces and two minifigs, which makes it a bit light, but we get what is already an iconic vehicle. If you’ve seen the trailer, this was the first vehicle we got to see, so it’s the one that was just stamped into our brains. There is something Star Wars about it, that mixture of futuristic and impractical that defined all of their technology (seriously, Speeder Bikes in a giant forest is just an awful idea).

This is also the set that I wanted more than the rest, in part because I wanted Rey, but mostly because I thought it had a lot of promise as a mix of value and pieces. First visual glances says it’s not a prefect representation (what we saw in the trailer didn’t have all those extra tools on the side, let alone the greebling), but still looks like a nifty little speeder. It also helps that reviewing 75099 Rey’s Speeder was made easier by the size and the lack of a comparison set. The closest thing would be the Landspeeder, but we don’t even know how this all fits together at this point.

When I was in the line for the Force Friday at my local TRU, and when I stopped off at Target and LEGO store over the next couple days, thisÂ was the most popular set. It helped that it was also the one with the most stock and the lowest price, but the bigger reason was this was the set that kids identified with it since it was so prominent in the trailer. It was the set they remembered, so it was the one they wanted. Looking back at the lineup, the only sets that weren’t featured in the trailer were the Imperial Landing craft (which was featured in a later teaser in the big First Order assembly), and the Snowspeeder. Everything else, and most everyone, showed up in that trailer.

So, it’s pretty obvious where LEGO is getting a lot of their inspiration, and smart that they picked the stuff that was going to be revealed before hand. I don’t remember if they did something similar in Episode I, but in hindsight, a lot of it seems like the stuff that was prominently in what we first saw. 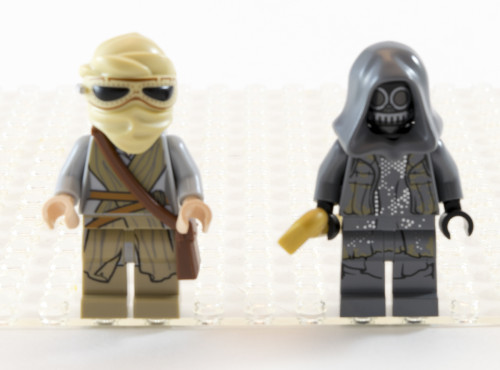 We only get two minifigs in this set, Rey in her fantastic new hat (which apparently is a re-purposed Stormtrooper visor in the goggles), and a figure calledÂ Unkarâ€™s Thug. We don’t know who Unkar is, but I’m going to go with the basic assumption that Unkar is a gangster, possibly a Hutt, who controls a desert planet and tries to control the salvage wreckage. I base this assumption on the fact that it’s pretty much exactly what JJ did in Star Trek… use some familiar things, change the names a little bit, and just reuse the idea. 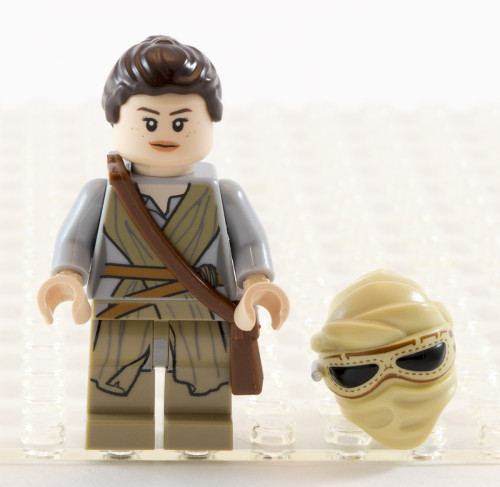 Rey has some fantastic value here. First, her likeness is a wonderful mix of LEGO minifig and Daisy Ridley… we haven’t gotten that good of a translation in awhile. She gets both the mask covering her head as well as a hairpiece, and she’s got printing on the torso and legs. The face is unique, and you have to love an easy-to-get female face with freckles and the fact that somehow they made a minifig head that looks British. 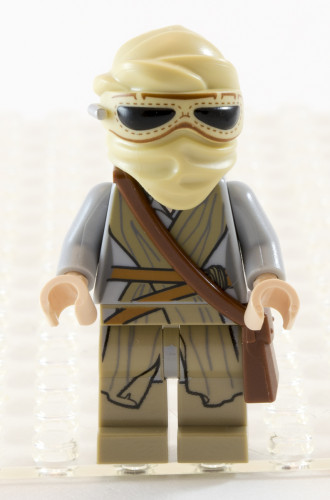 The mask is an interesting bunch, especially when mixed with the general tenor of the character. Take away the hip lines printed on the side, and it simply doesn’t matter if this is a male or female character. Based on what we’ve seen thus far in her scavenger costume on Jakku, this is a pretty solid representation. There are a couple of issues with printing lining up, as the torso printing on mine is justÂ slightly up, creating that gray line at the bottom, but otherwise, not bad at all. 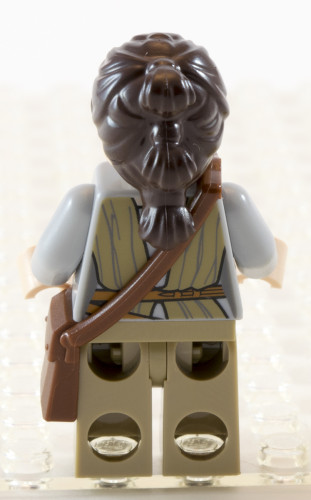 Like the majority of the minifigs in the Force Awakens sets I’ve put together, Rey does not have an alt-face. The hairpiece is also unique to her, and fantastic, and we now get the nice brown satchels again. These were a staple of the Indiana Jones sets, and have appeared as other colors (I’ve gotten a few as purses or bags in the Modular line)… but it’s great to see it here. Also great to see it show up in such a meta tribute… using Indy’s bag on a character in a movie starring Indiana Solo, Space Smuggler and archeologist extraordinaire!

Unkar’s thug is a sort of nondescript character that we haven’t seen a whole lot of in Star Wars, but have a lot in Disney’s other property, Marvel. I’m going to guess he’s some sort of Steampunk Chitauri or something. That or a more tech-savvy Tusken Raider? Who knows, other than JJ and crew.

This is a fairly good general-purpose fig, though I’m not a fan of the dot pattern. If he’s a general purpose, our thugs are oddly coordinated in their uniform, but hopefully it has the menagerie look that Jabba’s henchmen had. We also get the hood part in an unsual color, which is cool, and that head will likely get a lot of reuse with the punky nature of it (if we ever do a Steam Wars III: More Steam-ier, I bet we will see that head a few times). 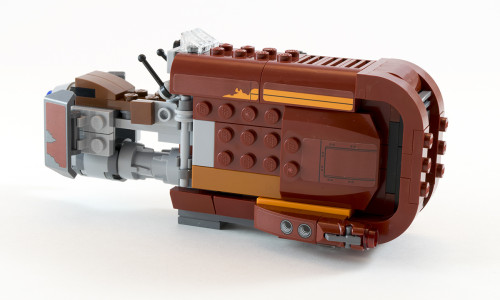 This set is called Rey’sÂ Speeder, so it has to deliver on both Rey and the Speeder.Â Given that we had MOCs of this particular vehicle within a day or two of the trailer hitting, it’s no shock to see it here. At first glance… I’m honestly not sure how much it looks like that vehicle. Let’s take a look at a still from the trailer for it…

Okay, I’ll be honest, it’s hard to judge a lot about the build, but we certainly are going to try! The most obvious thing that sticks out to me is the color. The whole speeder looks more dark orange than dark red. Of course, the majority of the parts in the set aren’t made in dark orange, which is likely why they picked what they did. 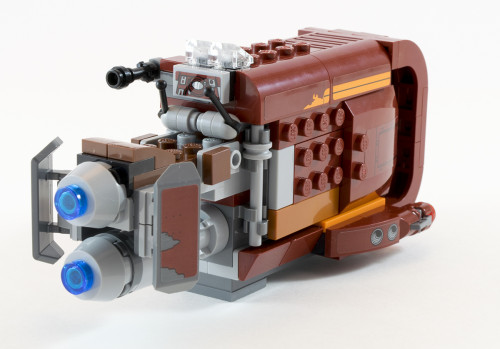 The ship seems to be designed as a utilitarian machine, something a young adult used to zip around Jakku when sheÂ  look for salvage . The color choice above is fairly obvious, and the general shape of the vehicle works. It’s especially nice around the engines and the outlet on the back, though I think the biggest issue is with the seat. 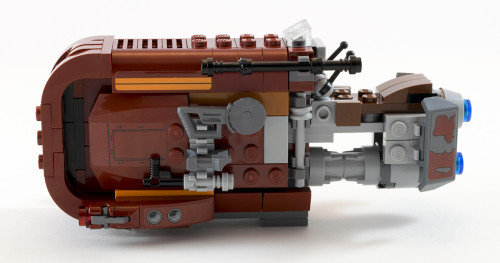 In that picture above, ReyÂ straddles the upper engine and braces on the lower. Obviously, a minifigure isn’t going to be able to bend at the knees, but LEGO has gotten that positioning right, on the STAP and with Speeder Bikes. On this, Rey just sits flat, which makes the whole thing feel ludicrously oversized compared to the size of the minifig. Scale wise, this doesn’t feel right when you sit her on it, since it’s more than twice the minifig’s height. More than that, the side of the ship is cluttered with a bunch of tools that aren’t part of the view we see above. I’m sure a scavenger has tools, but likely in the satchel or some storage compartment… 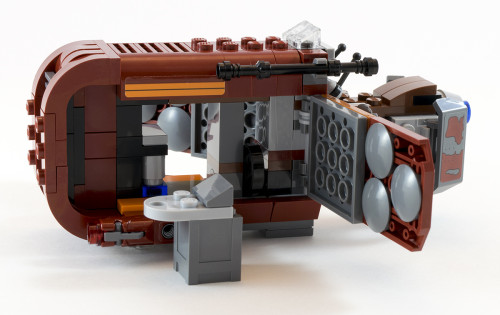 That bottom engine also hides a secret, that apparently this giant engine with a pilot is run entirely on imagination and magic, since engine twists to reveal said storage compartment (and no engine that I can see). I guess I sort of see this play feature, and it’s a very creative way to conceal it (not one that’s unique… the X-Wing does something similar for the S-Foil mechanism)… but it just looks kind of dumb when you open it. I get adding the blasters, even if I don’t like them (but do like getting them in dark red)… but this feature is only useful if you’re not swoosing the vehicleÂ around, and that seems like the only purpose of this thing.

Ultimately, when it comes to value, this is a solid little set. $20 for 193 parts is pretty good, especially compared to pretty much the rest of the Force Awakens lineup. We also get Rey, and while she’s not unique to this set (though her dust cover is), the only other set with her will run you $150. It’s hard to judge a whole lot from stills, but the speeder isn’t that great of a representation with all the extra “features” tucked in, but still a solid little build. Take those things off and it’s better, and I’d be curious to see some mods to it that puts the pilot in the correct position. You won’t feel ripped off getting this, and I know I’m thinking about another just for MOC and mod purposes, and that would make this a four out of five, even with the faults in the speeder build. 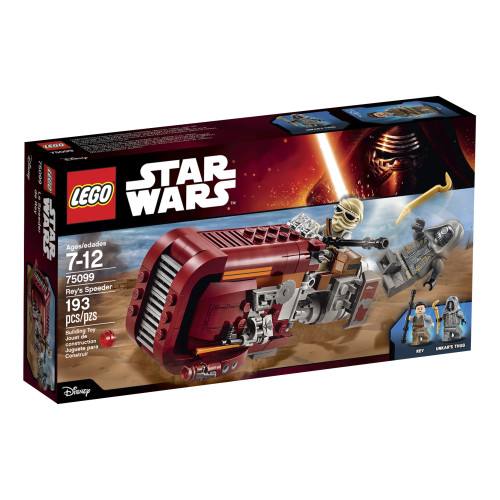