If you are a fan of Marvel comics, there are few things more capable ofÂ arguments than the Ultimate universe and few characters (in any medium really) who continually get the shaft as Spider-man. Of course, that whole running theme of making his life miserable really went to 11 in the Ultimate universe when he was killed by Normon Osborn (spoilers, I guess, to a comic series that’s four years old and was a 20-part series called “The Death of Spider-Man”). Well, mostly… these are comics after all.

In a series that is known for being loved and hated by various groups, it was still a pretty big shock. Yet it also started one of the better revisions to a character in recent years, when a new Spider-man, Miles Morales, took up the cowl after Peter’s death. Those who don’t know the character dismiss him as revisioning to diversify (which it was, I suppose, but I don’t see why that’s a bad thing), but anyone that’s read the comics involving him know that it was a way to look at the things that made Peter Parker interesting 60+ years ago in a different way. He had the insecurities of a teenage Spider-man mixed with the guilt of his predecessors death, on top of telling the story of a kid that’s from two different heritages. It made for some interesting stories (especially when he ran into the 616, or main universe, Spider-man), and in the fall he’s making the crossover to the main universe thanks to the quagmire that is Secret Wars.

He’s also had a growing presence in the Ultimate Spider-Man animated series, where he’s voiced by Donald Glover. Funny side-note… the original Miles Morales character was in part based on Glover’s wearing Spider-man pajamas on an episode of Community.Â Because I just love Miles Morales and his take on Spider-man, I was excited to review 76036 Carnage’s S.H.I.E.L.D. Sky Attack, a surprisingly cheap $12.99 set released this summer that includes hillbilly Venom (also known as Carnage) and 97 parts that somehow feels like more. After the incredible disappointment that has beenÂ pretty much every other Spider-Man set thus far, it was nice to see something new. This set can’t possibly let us down, can it?

I’m not sure it’s possible to make a set worse than last year’s Spider not-trike, so this set could be a couple of minifigs and a half-eaten piece of cheese and still top that thing. That we’re getting one more minifig and something that feels a whole lot more relevant to the characters also helps… the Ultimate universe (as well as the cartoon) feature SHIELD pretty heavily. I know these are based mainly on the cartoon, but Miles has only been in a handful of those and it’s not something I watch (Coulson as Principle… yeah, pass). What I do know is the comic, and SHIELD messed up big time in the Ultimate universe, and meddled in the lives of our Spidey friends a lot. 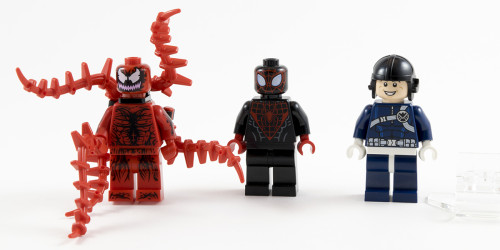 Our three figures are Carnage, Miles, and an unnamed, grinning, SHIELD agent. Not a bad lineup at all for a $13 set, and I really want more of those SHIELD guys for use in Marvel displays. 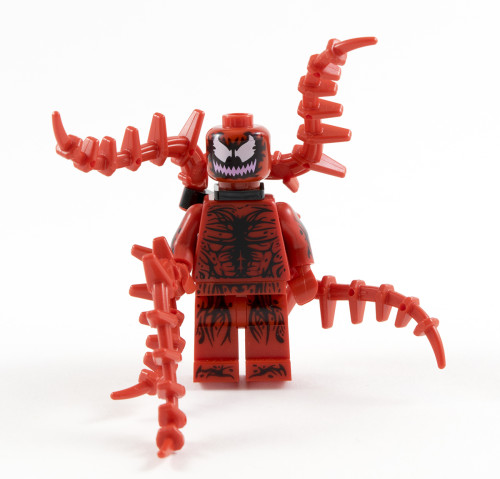 Carnage is a figure that kind of throws me, since this version looks very much like the mainstream version and not the cartoon one (which has a look much closer to the suit). It could also be the Ultimate Comics version, though he was pretty short lived (only four issues), though it came back as Gwen Stacy at one point and… you know, comics. For those who don’t know, Carnage is basically a corrupt version of a Venom symbioteÂ (it was pregnant, so I guess it’s just Venom’s baby) that takes over a serial killer… and bad things happened. 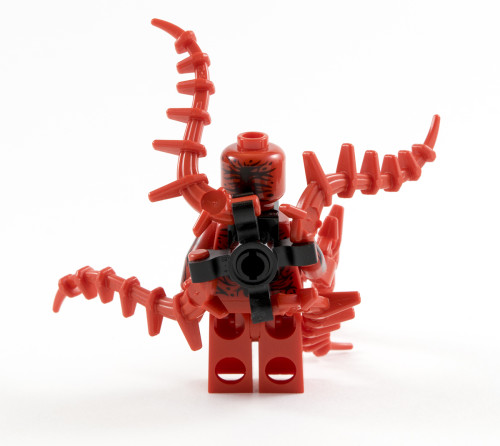 The minifigure is just a red version of the Venom figure we got a few years ago, except with more details for the rather yuck look of the gooey serial killer package. The back of the figure is still annoying and awkward, but somehow, the red parts work better on Carnage. 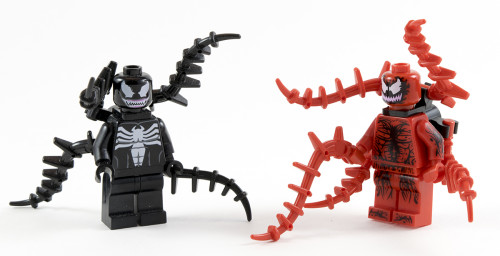 Venom is still the more interesting character, though I wish that Agent Venom would work his way into the mix, because he’s just an awesome character. I like having more villains, even if Carnage is to the Spider-man universe what the Saw movies are to horror films. 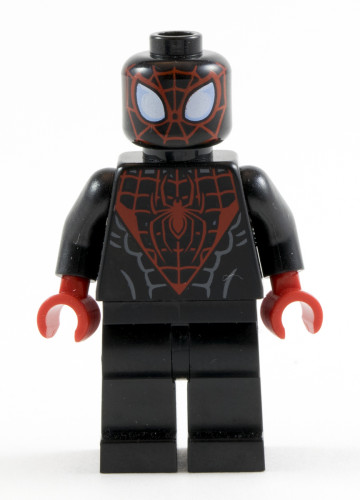 Miles, the Ultimate Spider-Man, is considerably different from the regular Spider-man figures we’ve gotten. They got the stylistic spider that he wears on his costume spot-on, though he’s got some McFarlinesque abs going on under the suit. It’s kind of a shame that he’s so over defined, because Miles is actually a pretty small guy in spite of the spider-powers. 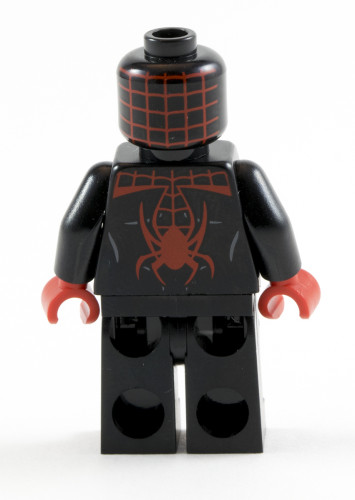 He’s a pretty simple minifig, but much like the regular Spider-Man, I really wish they would give us alternate heads and hair for masked heroes like this. Miles as much as Peter was defined by his alter-ego (and, like Peter, things went badly when he took the mask off). A shame that the onlyÂ characters to get alter-egos thus far are Tony Stark and Bruce Wayne, at least in easy to get sets… Harley Quinn came is in Arkham Asylum, but that set is hard to justify. Super heroes are even more interesting when you can mix in the secret identities, especially if you’re doing displays. 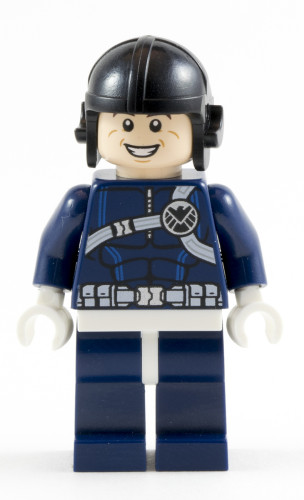 Our SHIELD pilot, who has a nice older-looking face (I assume this is his last day before retirement), but another absurd sort of six-pack and pecs. Apparently Batman designs their armor, so the only thing we’re missing is bat-nipples. 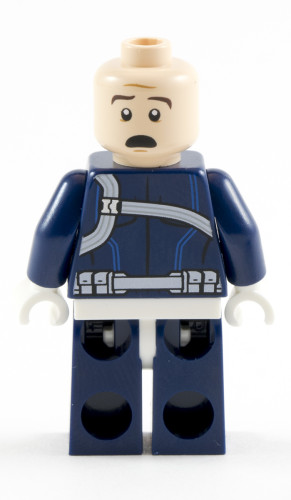 The alt-face on this guy is just awesome as well, making him just a stellar little minifig for value. I wish there was a way to get more of him that didn’t involve me ending up with a dozen Carnage and Miles. I also wish that LEGO would solve the printing on the side issue now that they have arm printing and two-tone arms down. Because that’d make him perfect. 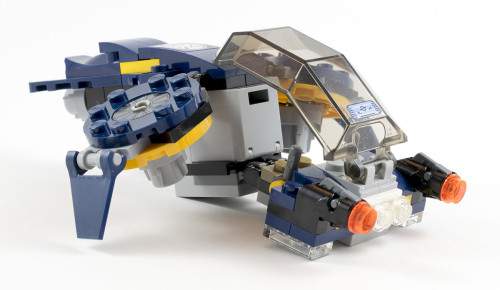 Of course, what is a pilot without a ship? Or in this case, what looks to be a hovering golf cart. I actually quite like this little build, it’s simple and functional, in a nice color, and has some really nice pieces tucked inside it. 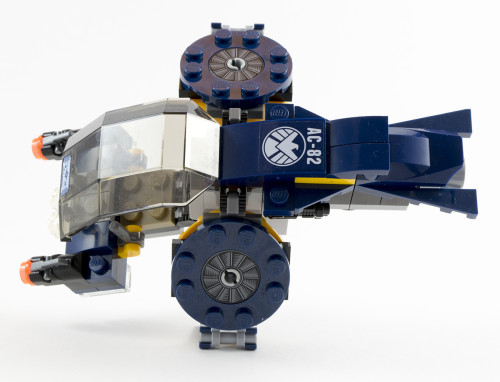 That windscreen in trans-smoke is nice, as is the shield logo and turbine stickers. The control HUDÂ goes on the outside of the windscreen, and could be used elsewhere in other ship builds. I do also wonder why SHIELD hates seat belts so much. 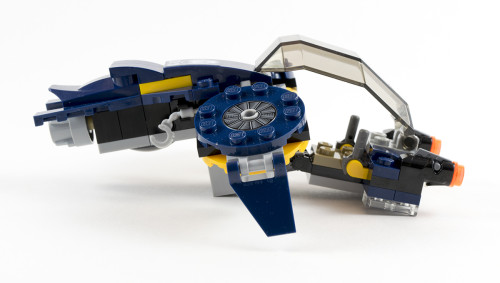 I’m also unsure how handcuffs are going to help you on a shape-shifting murderous blob, but I don’t want to tell them their business. Rounding out play features are two stud-shooters, and there is a box where you can stash extra ammo behind the pilot. I think this set, more than any other in recent history, really shows off the problem with using piece count as the measure of value. At 97 parts, it’s on the light side for a $13 set (though, again, better than that trike). Yet look at the parts that we do get… a windscreen, flick-fire bricks, dark blue curved slopes and dark blue round plates with an empty center.

There is some parts value in such a small set, and the vehicle honestly isn’t that bad in itself. I’d take a set like this over the First Order Snowspeeder that seemingly has great value… except that 1/10th of the parts are 1×1 round studs or 1×1 plates (I’ll be reviewing that set in the next week or so). I’d take a $12.99 set with three great figures and fewer unique parts over bulk… Pick-a-Brick and Bricks-and-Pieces can get me bulk. Between the low price, good figs, and good vehicle, I’m going to call this one a straight-upÂ five out of five. There certainly are a few flaws, but you won’t be wasting any money buying the set.

Verdict:Â 5 out of 5. This is one of the better $12.99 sets we’ve gotten in recent years, and probably the best Spider-man set that doesn’t have Nick Fury’s SHIELD hover car. You can buy 76036 Carnage’s SHIELD Sky Attack right now at Amazon! 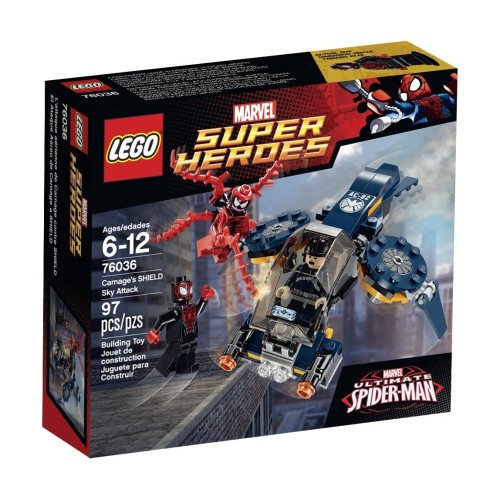