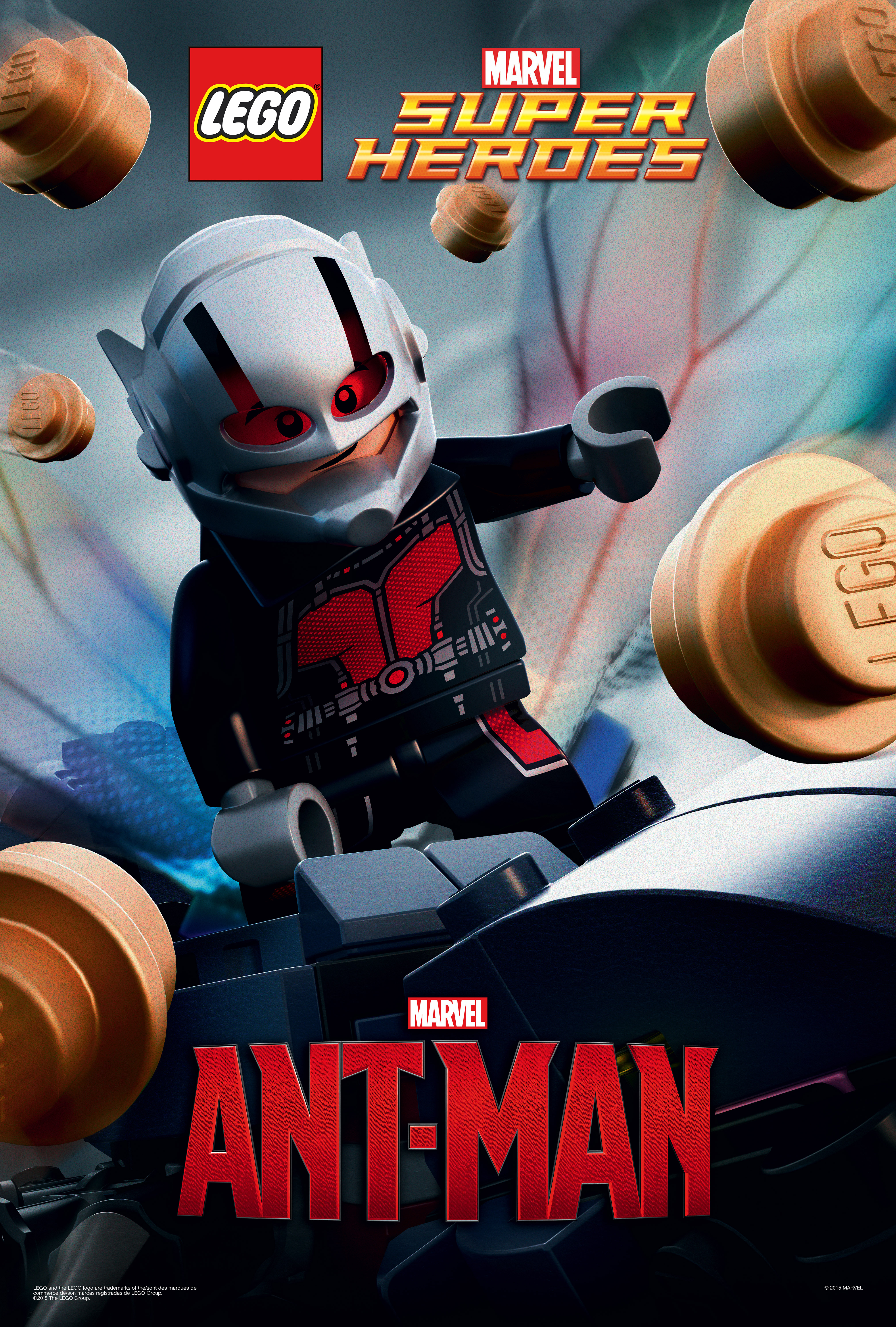 In one way, Ant-Man seemed like an odd choice to end Marvel’s juggernaut of a second phase. On the other hand, if you take its journey from initial concept being pitched at the dawn of the MCU to fully realized film, it’s almost perfect. Think of it as a palate cleanser between Phases. A little tequila sorbet to help you get past the events of the Age of Ultron and help you prepare the seismic shift that could come from Civil War. I’m not saying Ant-Man is a perfect movie, but it was a great way to close out this wave of films. Sure, they could have ended with Avengers 2, but they’ve done that before and this was something different. That’s not always a good thing, but for Marvel, it’s working. Very well.

I’ll try not to be too spoiler-y, but no promises. Let’s talk shrinkage. 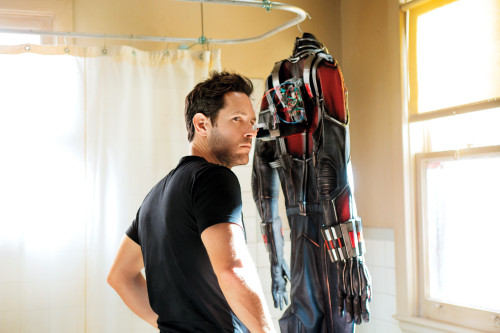 “What have you heard?”

Phase 1 was about super heroes. They were introducing characters and they all kind of felt the same. Some worked and some didn’t, but they did try and make different types of movies. The Incredible Hulk aimed for a feeling like the older TV series or The Fugitive, the chased man. It missed the mark, but they didn’t give up and by the time Captain America: The First Avenger rolled around, they successfully pulled off a period war film that still meshed really well with the rest of their universe. Phase Two built off of that with hugely successful forays into old school spy films and space operas, but still had films that fell short of the goal. They’re still about super heroes, but now they can be successfully more. With Ant-Man, we get a heist film that’s filled with humour and while it has it’s issues, it falls on the positive side for me. Not as good as last years films, but a little better than Age of Ultron and that’s a pretty good place to find yourself sitting since this is the second film this phase that people were sure would send the train off of the rails. The first was Guardians of the Galaxy and we all know how that turned out. 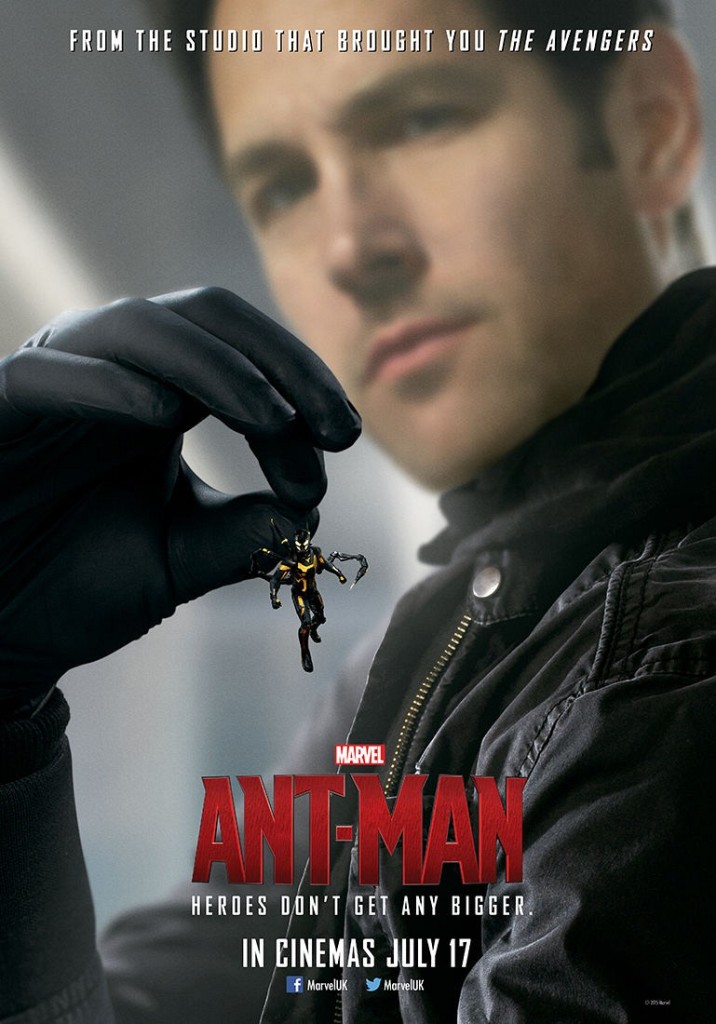 The biggest problem I had is with character and motivations. We are very quickly spoon fed who the good guys are and who the bad guys are from the very first scene. The main antagonist, Darren Cross is never fully realized and while he makes a specific point to tell you his motivations, they don’t really gel with his protrayal. We’re told that the exposure to Pym Particles has had an affect on him, but that he was never really stable to begin with. Only in one scene does this ring true, the confrontation with his mentor, Pym and it’s as obvious as the punch he said he saw coming. Just with less impact. He’s bitter. He’s a genius. He obviously not a member of PETA and he’s a jerk. He’s certainly a threat, but he ends up being a forgettable villain. Very flat performance for a villain that will leave no impact and not be missed. 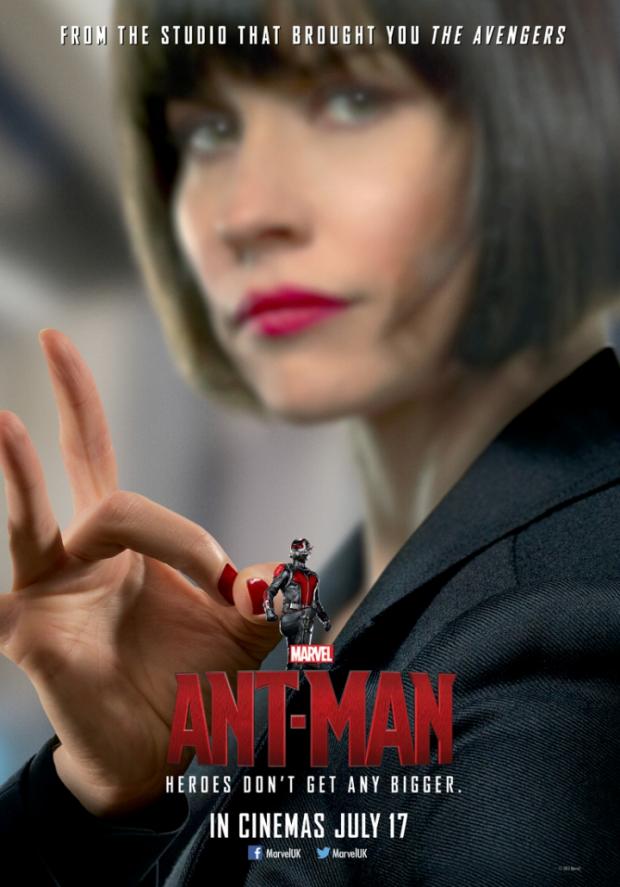 His daddy/daughter issues stunt the growth of Hope Van Dyne, who is basically left with very little to do. By the time she gets around to muttering “It’s about damn time…”, I was in total agreement. Again, it’s another character introduced for the greater growth of the MCU as a whole, but why not in this movie? I said this film is a perfect end to this phase and in the way Marvel has mishandled their female characters it is. It’s a flashing neon sign that says “WE DON’T KNOW WHAT TO DO WITH OUR WOMEN!”. They know they’ve got great characters, but they don’t seem to be able to engage them consistently. Hope is a new character, designed to be a stand in for her mother Janet, but she has zero impact on the film other than to be wet blanket for the two main male characters and hook up with whoever her fathers protégé is at the moment. Another wasted opportunity to add something special to THIS movie, in the attempt to set up events for future films.

Even the titular character suffers from a weakness of… well, character. He’s a recovering ex thief who as soon as he hits a bump in the road, goes right back to it. He’s desperate, but it’s made clear that he’s more a Robin Hood than a straight up thief. The main problem with that is he’s a phenomenally good thief and those skills weren’t picked up while he got his masters in electrical engineering. Rudd has a lot of fun with the character, though there’s no real depth to his performance and I can’t blame him for it. The mask is a huge hindrance to the third act for both Lang and Cross, as you only see the eyes which are in frenetic motion and obscured by visors. I found a new appreciation for the HUD trick they use to keep Tony’s face front and centre. There’s still no excuse for Thor not wearing his damn helmet though. You could still see his face just fine. 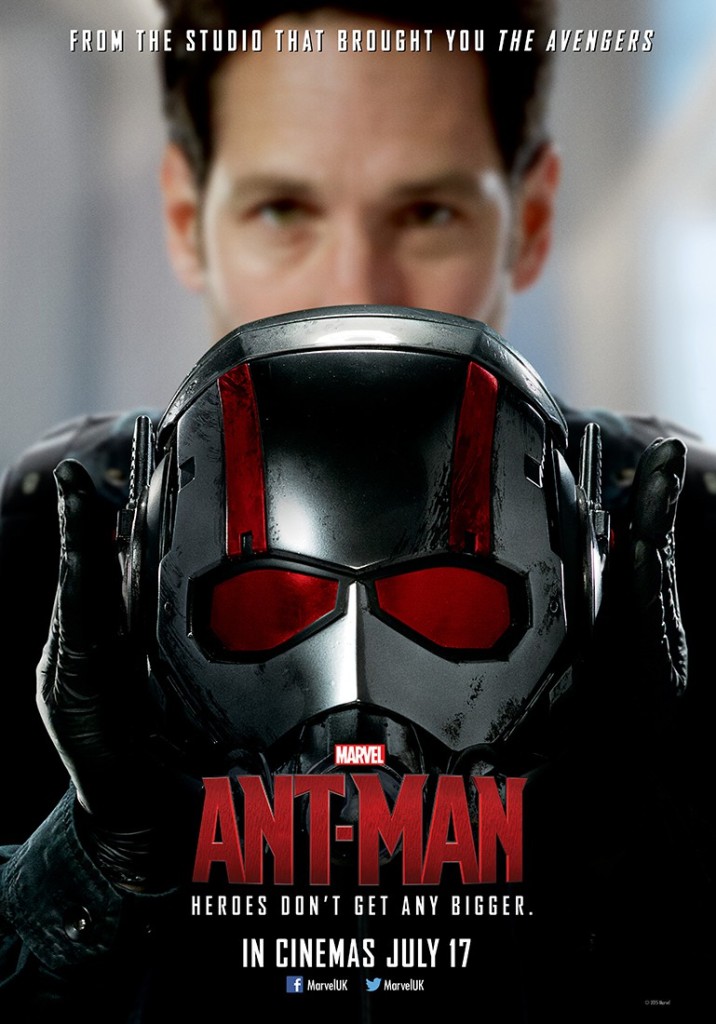 Rudd is charming as Lang and while he is the very heart of the film in pretty much every way, I will be very interested to see how he will fit into the avengers. He’s a follower, not a leader. Perhaps it’s a side effect of his time in prison or regrets about his Robin Hood days, but he spends the entire movie doing whatever anyone else tells him to do. Until the one time at the end, he does the opposite and it saves his life. Hopefully, it’s a wake up call. Otherwise, I think he’ll be a fun addition to the MCU.

The film had a lot of good stuff going for it too, though. Humour was of course its biggest strength, but the shrinking sequences were really great and the heist plot was simple and well executed. The supporting cast was really good even if they were too marginalized. Scott’s friends were the scene stealers though and you can sign me up for story time with Michael Pena anytime. The stakes were high enough to keep things interesting, but not insanely huge or world destroying which is a balance I think Marvel has mastered. It’s stakes are pulled back from AoU while slightly influenced by them, but remain a stand alone scenario while being a set up for Civil War whatever the outcome may be. Nicely done. Overall, it set up a lot of development for Captain America: Civil War and beyond with many little easter eggs throughout and it only ever felt a bit forced once. For me anyway.

In the end, it’s a lot of the same in a slightly different packaging. In a mostly good way. Marvel still has a way to go to fix some of their continuing issues with women and POC, but I’m hoping Phase Three will start to make some leaps in that area. I’m not going to let it’s portrayal of these characters bring it’s score down too far though, because it was still very entertaining and I’ve already let the exact same thing slide in previous films. Yes, I’m looking at you Guardians. This has to be dealt with as a systematic issue and not one specific to this film, however blatant it comes through here.

One reason for this could be less obvious. It still reeks of Edgar Wright’s contributions to the story, while lacking his punchy directing style, smooth pacing and excellent transitions. I’m left wondering if the portrayal of Hope is the result of Edgar’s writing, a big blight on the film left by his usual inability to give female characters any real depth or purpose (not including Spaced). It’s the one area he and Marvel certainly need work in, but an Edgar Wright directed Ant-Man is still on my list of films to check out should I ever master inter-dimensional travel (at this point my jumps are far too short and comically random). 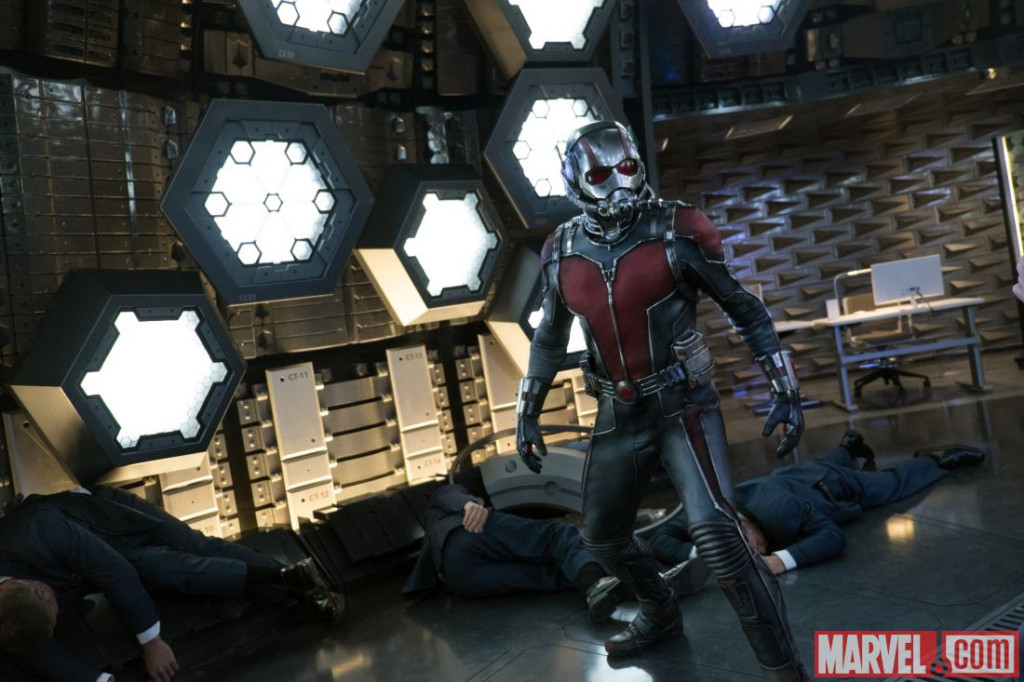 “Wait. How did I end up on the TARDIS?

Now quickly, I’ll look at the Ant-Man LEGO set in relation to the film. Love it.

There were lots of neat things the could have done, the keychain, confrontation at the old storage facility, the helicopter battle… scratch that, we’ve had enough of those sets. We get Ant-Man with his favourite ride, Antony. I’m not sure why they made him dark blue, but I’ll chock it up to LEGO being LEGO. I also can only assume that the reason for the over the top wing attachment in the set is to avoid him… losing them. They included the films villain which is always good and was a shoe in for a micro battle scene in the movie from the first real trailer. The LEGO bricks and screw were both items he interacted with specifically in the film at different points that are easy to replicate and allow LEGO to make a very meta set. The yellow brick should be a 2×4 not a 1×2 plate, but who cares (feel free not to answer that). The inclusion of Hank Pym in a Black Out suit, while a mystery based on the film I accept gladly as a rare variant I won’t have to pine over. Wish they’d do that with Iron Man sets more often, so we could get some good armours.

If you had any reservations about seeing Ant-Man because you figured it was going to be a train wreck, it’s not. MCU fans should find a lot to enjoy and most will probably agree this one would be in the upper third of the films, or at least the king of the middle. I’m giving it the same numerical score as Avengers: Age of Ultron, but while I think it’s better than that films 3.5 it’s not quite worthy of the straight 4 our system awards it. It’s all subjective of course, but the train keeps chugging along whether this film does it for you or not and we won’t have long to wait to see Rudd’s Ant-Man again. Box office numbers will be a big deciding factor in any sequel opportunities, but if it does happen I hope they take the opportunity to fix the mistakes they made in this one. There’s no reason this one couldn’t have been on par with Iron Man.