When the Jurassic World sets there was one part that everyone noticed immediately and was probably going to be the new hot part to fit into MOCs. I speak, for course, of the trans-yellow boat bottoms used in the headlights for the truck. Can’t wait to see how they are used! Sure, some people also wanted the new round transparent spheres, but they just lack imagination.

Obviously, that was some sarcasm there, because the spheres were certainly the most striking part in the early views of the sets. This is the second in our series of Jurassic World sets, the review for 75816 Dilophosaurus Ambush, the $29.99 set in the lineup, and the cheapest to include the sphere. That means I expect to find a whole lot of ACU guards and Dilophosaurus parts showing up on the aftermarket as people crack these sets to get the sweet, sweet, sphere.

This set also has the distinction of actually having a vehicle that seems to be a proper minifig scale that also doesn’t have an absurd mounting of giant launchers or missiles on it. Most of the focus is into the jeep more than it is the sphere, but it’s also kind of unclear exactly what they’re going to do on the ambush. Perhaps it was just a bit too much to ask for a trap in a $30 set that sports 248 parts. But hey, at least our jeep has an “rear explode function” for when this thing blows up… somehow, and a winch for treating a dinosaur just like an AT-AT.

Unlike Ace, I haven’t seen the movie yet. I’m somewhere between indifferent to kind-of-want-to-see-it in the spectrum of the whole thing. I love dinosaurs, so it’s cool to see it, but found the abysmal science and the “how did no one say ‘this is a stupid idea'” in every scene of the Jurassic Park movies a bit off-putting. Action scenes can be cool, but as soon as one of the characters talked, even in the original, I wanted to just start screaming. 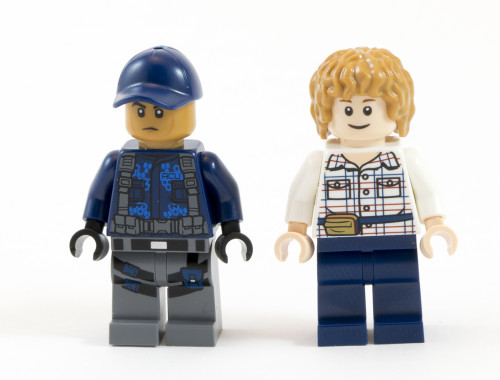 We get two minifigs in this set, which seem to really have had a problem with my slanty table (it’s a pretty awful slope in the apartment, sorry)… an ACU guard andÂ Gray, theÂ younger brother for the obligatory child in danger duo that seems to be necessary for Jurassic Park films. Apparently the dinosaurs are powered by child endangerment. 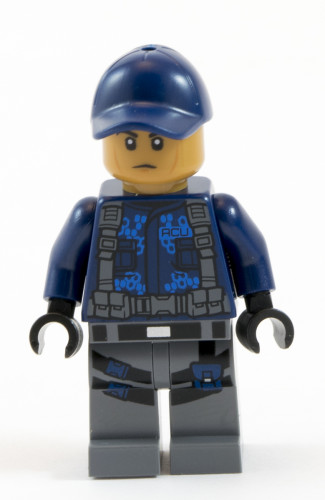 Wow, LEGO, a person of color ACU guard? Also, I’ve seen very conflicting statements on it, but apparently ACU stands for Asset Containment Unit. Was that said in the movie? The people that I’ve asked who have seen it didn’t remember it being said. Of course, the downside to a POC for a character like this means that we’re likely getting him because he’s going to die a horrible death (because Hollywood can’t imagine it any other way). 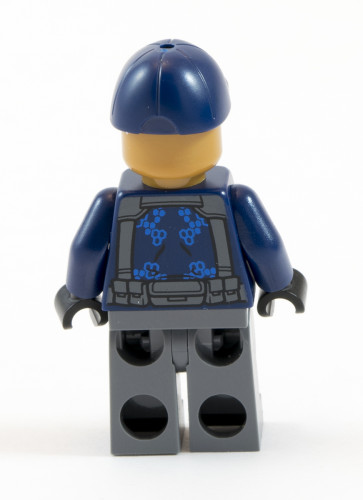 I actually really likeÂ this minifig. Good torso that I can see having many applications, especially in sci-fi applications or maybe some military figs. We get a good generic face too, which I’m not certain is unique (it’s not even listed as a part yet), and the legs with tactical pouch printing is great too. That plain baseball cap is awesome, and I like that it’s already available on Bricks-and-Pieces!Â That or add a few dozen more pouches and some shoulder-pads, bring in Winter Soldier’s metal arm and some new face and make a Cable minifig. 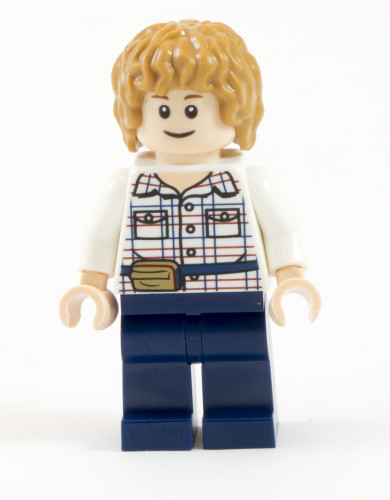 The other minifig is Gray… who I think is about a 12 or 13 year old kid in the movie (the actor playing him is 14), so I guess that explains why they made him look like that awkward 30-year-old in a hobbit cosplay outfit wearing a fanny pack that you see, and avoid, at any nerd convention. 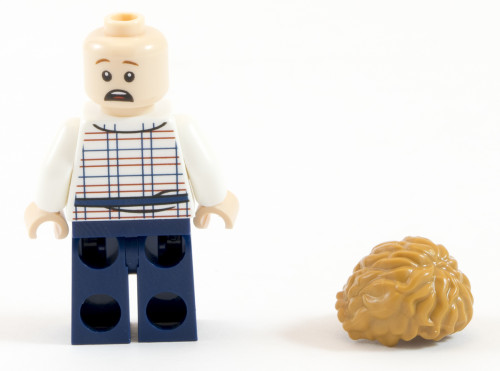 Unfortunately, that isn’t an “I’m about to get eaten face,” that’s a “oh crap, my minority friend over there is being eaten” horror face. As figures go, this guy in the end is less than the sum of his parts. Take the parts and you have a lot of nice stuff, but the figure doesn’t look like a 12-year-old kid in anything but the face. 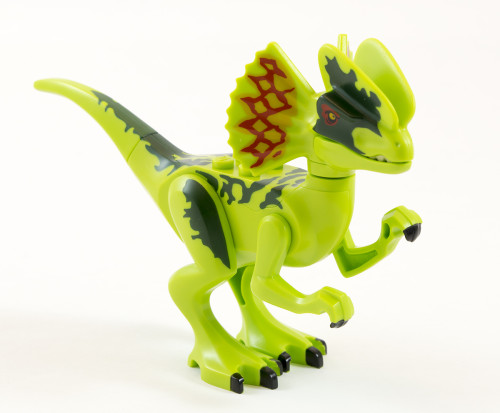 Our dinosaur in this one is the set’s namesake Dilophosaurus. This guy is notable for being a new dinosaur type in these sets and for being the guy that killed Newman from Seinfeld in the first movie. It’s a bit more realistic looking than, say, the raptors in the movie, but probably with some of the most “liberties” (read, made-up stuff) with how they work. 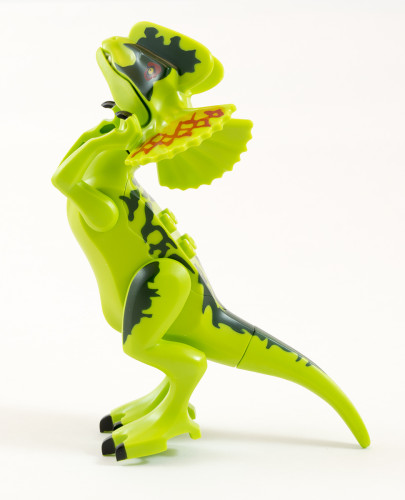 This is actually a pretty cool dinosaur, with a whole bunch of points of articulation. I don’t mind getting some variety with these things, so I welcome this. Now if only they’d actually include some of the bajillion or so plant eating dinosaurs, which have been featured in the movies. A Stegosaurus, Triceratops, or maybe even a nice brontosaurus (which is totally a thing again). Okay, maybe that last one would be a pretty bad thing, since to do it in scale would be expensive and to make it too small would make it look like Dino. 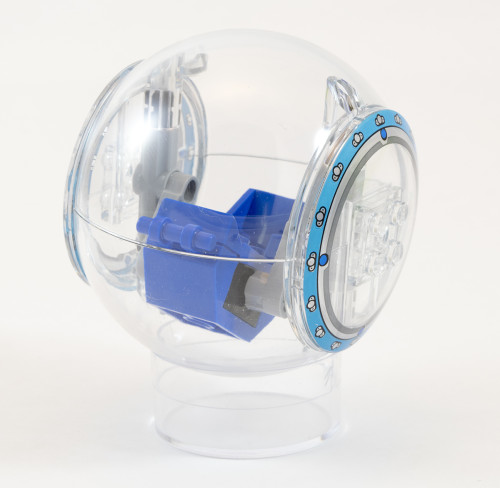 The ball is pretty interesting, ans the thing that most people are likely to pick up the set for. It rolls around pretty well, and the way that the bricks are inside act as a pretty iffy gyroscope / weight for it. The seat sits on low-friction pins that are part of the internal support, but the big problem I ran into was that it was impossible to keep the seat or figure pointed ahead… it always wanted to tilt back like you see above. 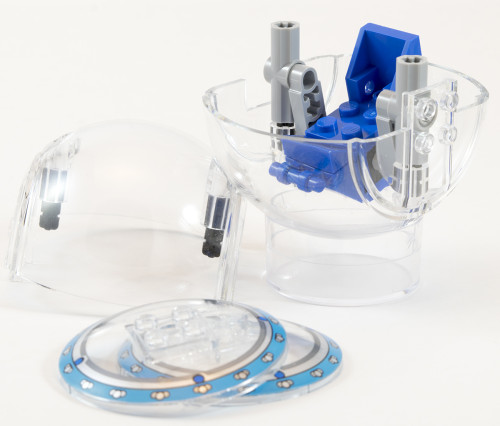 The most interesting prospect for this is going to be in some space-type applications, or maybe for the three or four people who still MOC stuff for the Atlantis theme. This is the perfect bubble for a cockpit in a ship or a sub, and the technic pins give you some mounting options for stuff inside. The dish parts have a good print as well, which adds to their utility. 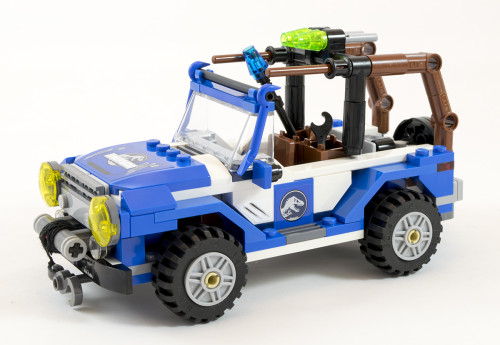 The jeep (or what LEGO calls a 4×4) is actually a pretty good LEGO truck. It’s sized well for the minifig, it has some good tools and setup, and there are some decent parts to it. That winch would be cool if it didn’t strike me as a terrible solution for taking down a small, agile, poison-spitting dinosaur. If we were taking down an AT-Brontosaurus, I’m sure it’s a great tool, but for this ambush, you’re just asking for poison dinosaur in the back. Maybe put the top on the jeep or something (since the movie uses armored vehicles for the ACU). 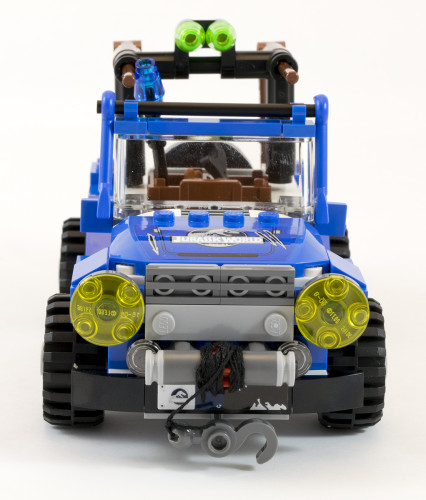 I normally hate string parts on sets, but here that thing totally works, and adds a nice authentic touch. The headlights are comically large, but I guess that works for blinding little dinosaurs. That front grill is probably one of the worst aspects, simply because it’s just so lazy in the scope of the build. That front bumper, on the other hand, looks pretty good and fits the aesthetic. 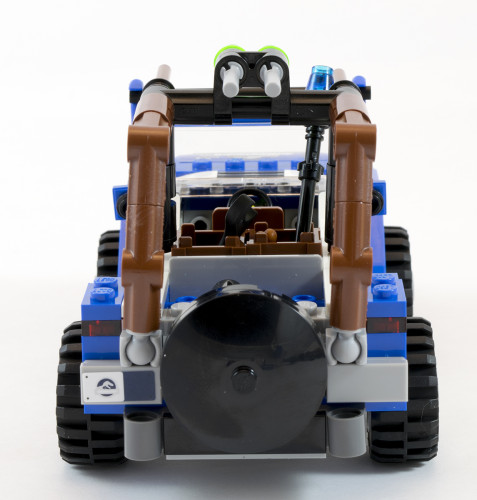 I really wish they would have put an actual tire on the back instead of what I guess is trying to pass for a cover. It’s not as if this jeep is what is in the movie, so we could make it a better jeep. We get the tow hitch hookups, which is cool, but almost would have liked a bumper that had a tow hitch… using parts that LEGO certainly has, given that they were used to connect the cage to the jeep. 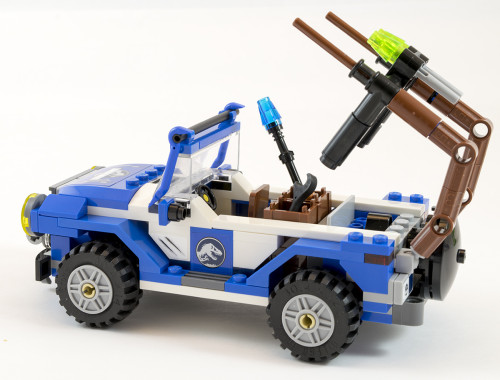 I’m not sure about the explosive feature on the back though. I guess you “explosive” means “knock off the roll cage that looks bad anyway” we can sort of roll with it. I get it, kind of, as a play feature if this was the T. Rex set and we wanted something ripping it off. But unless the dilophosaurus has learned to fly (that would make a great horror movie), he’s not going to rip it off. He’s going to spit poison through the giant gaps and then crawl inside to eat you.

Of course, the absolute craziest thing in building this set has got to be the use of blue prybarsÂ to outline the windshield. There’s this concept of “illegal” build procedures, things that LEGO doesn’t do in making an official set, and this seems like a half-mile past most of the other illegal things I’ve seen before. Don’t sneeze near them, they will fly off. It is cool to get prybarsÂ in blue though… I guess I can start on that Lowe’s MOC now. Of course, the prybar I bought from there is yellow and black, so maybe not.

In the end, this is certainly a better set overall than 75915 Pteranodon Capture, but that doesn’t stop it from being average at best. I like the general idea of the Jeep, even though it’s not movie-accurate to what I know about (the original movie did use Jeep Wranglers, but the new one uses armored vehicles or something). The play feature with the explosion is lame enough to make me wish they would have just used more flick-fires (which are just silly in their own right, but all sets have them these days) and the back would look better with an actual tire. That being said, there’s some opportunity to MOC a better Jeep out of that, so that has promise.

The ACU figure is a welcome addition to our expanding palette, though the Gray figure just strikes me as awful. That ball is as cool as advertised, though I’d be wary of rolling it, since it’s going to scratch up pretty easily. It should have some very interesting applications on the MOC scene in short order though. The dilophosaurus is a unique dino to put into our mix, though for being an ambush set, I’d either like to see him ambushing or maybe the set to include a trap or something other than a winch. All of this together makes the set a pretty average 3 out of 5.

Verdict: Three out of Five. Find it on a good sale and it has very good value, but it’s not terrible even at regular price. You can pick up 75916 Dilophosaurus Ambush right now on LEGO Shop@Home. 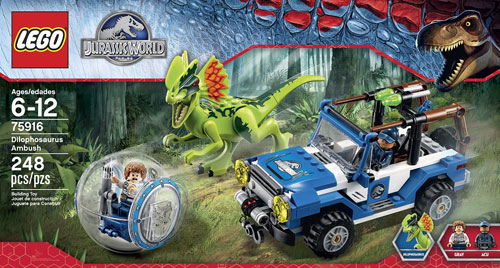