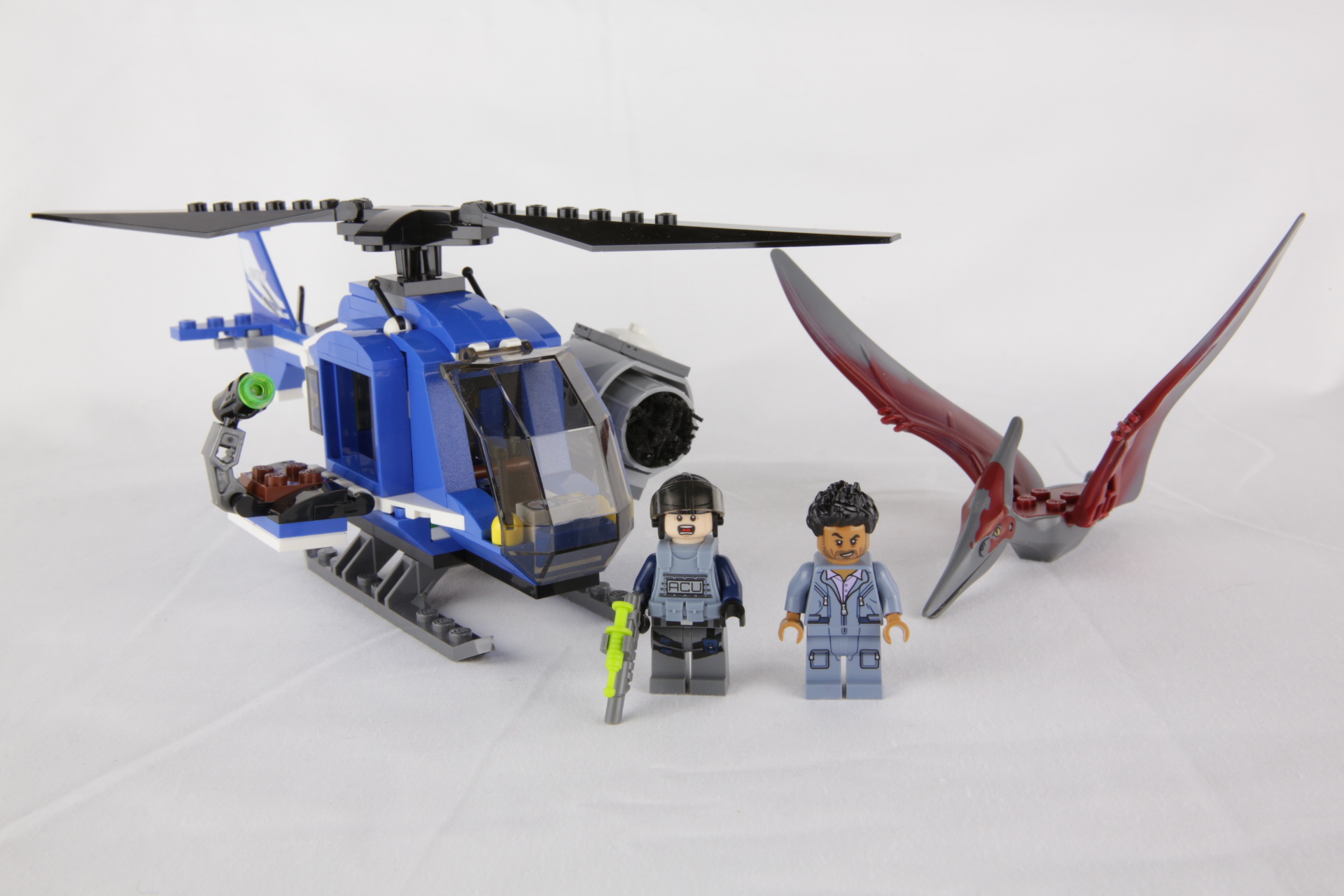 Greetings, readers! With the Jurassic World movie opening this past weekend, we will be bringing you a review of a LEGO Jurassic World set every day this week starting today! Up first is our review of 75915 Pteranodon Escape and we’ll be going up the price point ladder all the way through Saturday ending the week with 75919 Indominus rex Breakout. And while that movie just sucked, at least we get some cool sets out of it.

Ahhh…. price points. In some ways, you gotta love’em. Having sets hit a variety of price points gives everyone a chance to pick up a set based on their budget, be it for themselves or as a gift. The drawback is that there is a tendency for the lower priced sets to be lacking in quality because of the lower piece count. 75915 Pteranodon Capture is the cheapest set in the Jurassic World line (not counting the promotional polybag set, 30320 Gallimimus Trap) and unfortunately doesn’t deserve your hard earned dollars.

Let’s just get this out of the way: Pteranodon Capture resembles very little to the scene it’s inspired from. Yes, there was a helicopter; yes, Simon Masrani did pilot said helicopter; there was an ACU trooper; and yes, there was a pteranodon. It’s been a long established pattern that LEGO sets aren’t exactly the most accurate when recreating the scene from which the set is based on and thankfully LEGO is keeping that tradition alive. If you can just accept that LEGO extrapolated the basic elements of the aviary sequence to create this set, then they didn’t really do a bad job of it. So taking that into consideration, let’s go on with the review. 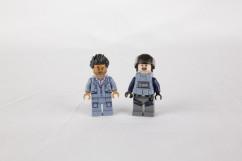 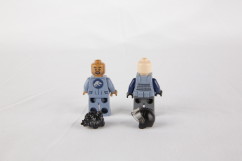 Starting with the minifigs, you only get two in this set. A generic ACU trooper and and Simon Masrani. The ACU trooper does not come with a double printed head, so his only expression is that of surprise that he does not have any other expression you can choose from. Either that or he’s opening wide for the dentist. The set’s only named character is Simon Masrani. He came with a double printed head so yay? He comes decked out in a suit but by the time this scene happens in the movie, he’s ditched his sport coat and flew only in his lavendar shirt. 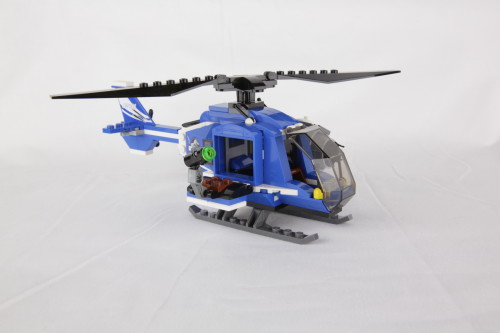 The helicopter in this set is a fast, simple build. Starting with the blades, I’m not a big fan of the element choice. Those big fin, flappy things just don’t look right; they look cartoony and exaggerated. I think 1xn tiled plates would have looked better and a lot more realistic. 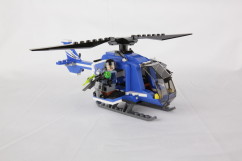 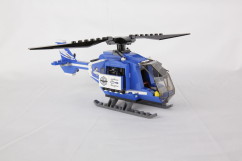 On one side of Jurassic One is a gunner’s station where the ACU trooper can sit and launch 1×1 round trans-green plates at its enemy. When not in use the whole thing flips up and stores neatly inside. I actually kind of liked this feature since it looks somewhat normal when the gun platform is stowed. Behind the cockpit is an empty space where, with some finagling, you can probably store the ACU trooper while he’s not battling the pteranodon. 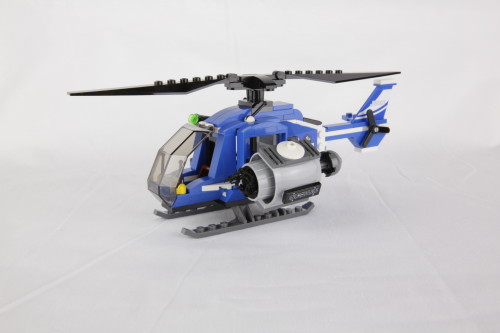 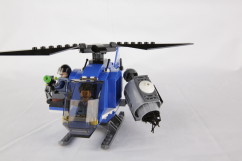 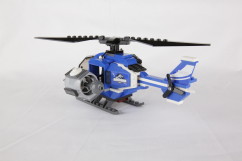 On the side opposite of the gunner’s station is a HUGE net cannon that can rotate every which way thanks to the strange choice of a ball joint connection. The plunger in the back just pushes the net forward so you’ll have to apply a little force to really get it to launch. The net cannon looks absolutely ridiculous and isn’t what happens in the movie at all. But then again the whole chopper and its flight crew meet a fiery death caused by several mid-air pteranodon impacts so I suppose a little artistic license has been applied here. Still looks utterly stupid. I wouldn’t have minded a second gunner’s station but this is basically a product of LEGO sanitizing the set: launching a net to capture the pteranodon sounds less voilent than shooting them out of they sky with a bolted-on machine gun like they did in the movie. 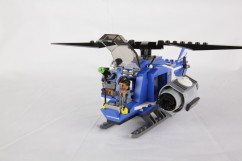 Because of its small form factor the cockpit is not enclosed because Simon needs to stick his elbows somewhere. Overall, the small chopper is cute and swooshable even with the gigantic cannon. I built this set before seeing the movie so I was a little surprised that a named character would be piloting the helicopter and not be the one in peril. But that is indeed what happens. 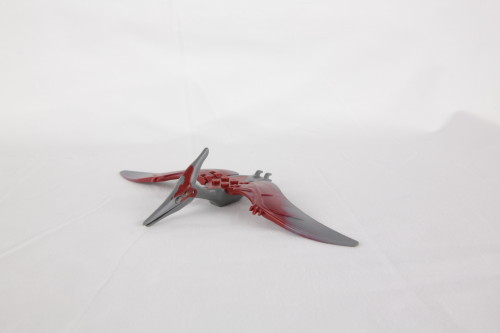 Moving onto the pteranodon model, I’ll just come out and say that I am not a fan. It bugs me. It’s not because of the body being hard plastic, the wings being softer and more flexible plastic, and the head pieces being made out of rubber. I’m annoyed that the top of the head and the lower jaw do not line up correctly. I suppose I could put some of the blame on the soft rubber material that could not be molded to the same tolerances as hard ABS plastic. The top of the head and lower jaw are packaged separately in their own molded plastic tray in a small cardboard box apart from the rest of the elements so there is no way that they could have warped from pressure from sitting a big pile pressed up against all of the other loose elements. I’m nitpicking a point really but my OCD won’t let it go and my point in bringing it up is that LEGO’s quality control is better than this. It probably won’t matter for the mass majority of people because they probably aren’t OCD enough like me to obsess about toy parts not lining up within fractions of an inch.

Oh that reminds me, speaking of LEGO’s quality control: the stickers on the tail fin. The angles on the stickers are not cut at to the same degrees as the LEGO tailfin element. I had to put one corner of the sticker right to the edge of the surface so that the opposite corner wouldn’t hang over. Poor quality control in my opinion.

Oh yeah, and while we’re on the topic of stickers: Dear LEGO, could you please indicate on the instruction sheet where stickers are supposed to go as you put the stickered element on the model and not 10 steps later where it might be more difficult to line it up correctly? 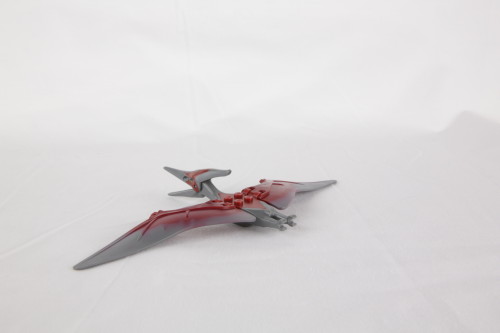 The other issue with the pteranodon model is that the body and feet prevent it from being displayed any other way other than flying or planking on the ground, laying on its stomach. The clips for the feet are permanently pointing behind it so even if you clipped the feet to something and oriented the body vertically as if it were standing on two legs, you can’t even rotate the head downard; it will have a permanent upward stare. The pteranodon will always look best gliding, swimming, or doing the slip’n’slide. That lends itself to being very swooshable, so for those epic sky battles between dinosaur and helicopter, it is more than appropriate.

Overall, the set isn’t terrible but that’s my bias speaking. I have a thing for LEGO aircraft and the helicopter model is neat if you take off the two side weapons and made it look like a normal helicopter. It falls below the magical price per part ratio but you do get a new pteranodon model. It would have been nice if there were a second pteranodon or a second ACU trooper included to up the value for the cost but it is what it is. There’s nothing in this set that would blow anyone’s mind, nor is there any other reason that I could think of that would make me recommend this set as a purchase at full price. Minifig selection is ho hum and the parts selection is nice if you’re into blue stuff and not so nice if you’re not. 75915 Pteranodon Capture receives a 2 out of 5 stars. Get it if you’re a completionist, but if you don’t you aren’t missing much. It’s fun set, but not twenty bucks fun. Wait for a sale or a clearance to pick it up; it will be inevitable.

But if you still want to pick this up, you can pick it up from LEGO Shop@Home or Amazon: 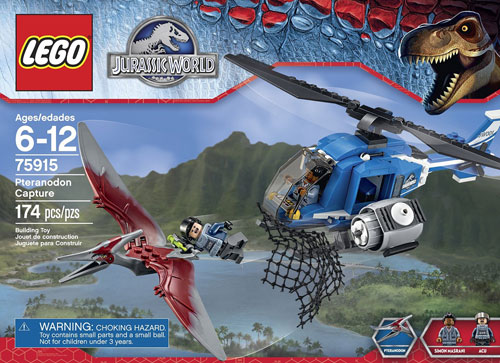